In a special gesture, Prime Minister Narendra Modi was driven by Mexican President Enrique Pena Nieto to a restaurent for dinner. (Photo: AP)

Mexico City: India on Thursday received crucial support of Mexico in its bid to become member of the NSG ahead of a plenary meeting of the 48-nation bloc whose members are allowed to trade in and export nuclear technology. 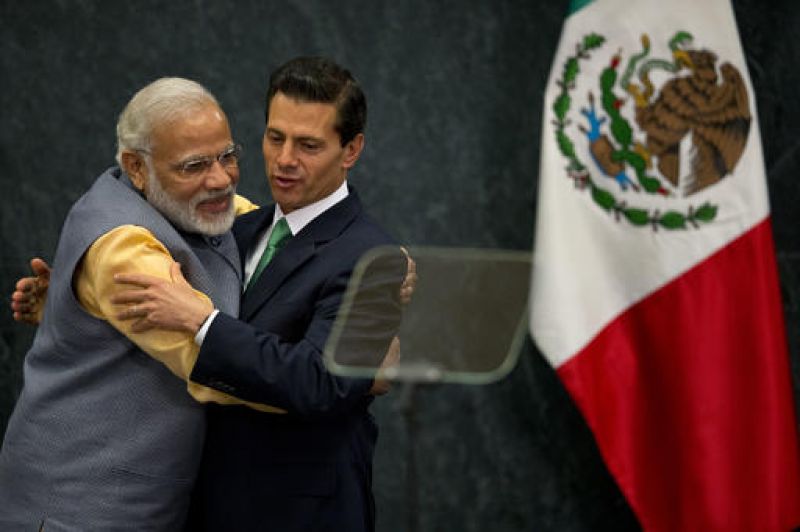 "Mexico supports positively and constructively India's membership of the NSG," the Mexican President said at a joint media interaction with Modi.

On his part, the Prime Minister thanked Mexico for its support and called the country an important partner for India's energy security.

"We are looking to move beyond buyer-seller relationship and into a long-term partnership... We have agreed to develop a roadmap of concrete outcomes to upgrade our ties to a Strategic Partnership," said the Prime Minister who arrived here earlier in the day from Washington on the last leg of his five-nation tour.

In their talks, Modi and Nieto explored ways to deepen bilateral cooperation in a number of key areas including in trade and investment, information technology, climate change and energy.

The two headed to a restaurant called 'Quintonil' to bond over vegetarian dinner.

"Bonding over bean tacos! President @EPN and PM @narendramodi share a meal," Swarup tweeted along with photos showing the two leaders chatting away while sitting at a table in the restaurant.

Support of Mexico and Switzerland is seen as important in the wake of China opposing India's NSG membership arguing that it was not a signatory to the Nuclear Non-Proliferation Treaty (NPT).

The issue had figured prominently during talks between Modi and US President Barack Obama in Washington on Tuesday. The US and many other NSG member countries have supported India's inclusion based on its non-proliferation track record.

The NSG works under the principle of unanimity and even one country's vote against India will scuttle its bid.

India has been pushing for membership of the bloc for last few years and had formally moved its application on May 12.

The NSG looks after critical issues relating to the nuclear sector and its members are allowed to trade in and export nuclear technology. Its membership will help India significantly expand its atomic energy sector.

The NSG had granted an exclusive waiver for India in 2008 to access civil nuclear technology after China reluctantly backed India's case based on the Indo-US nuclear deal.

US announces restoration of relations with Palestinians

Time to heal America: Biden urges unity in his first speech as US President-elect

WHO looks at e-certificates for COVID-19 vaccination