AGENCIES
Published Jan 9, 2017, 5:21 pm IST
Updated Jan 9, 2017, 5:52 pm IST
While Streep did not name Trump directly, she had used almost the entire speech to criticize his behavior and policies.

The three-time Oscar winner was referring to a 2015 incident at a South Carolina rally when Trump flailed his arms and slurred in his speech in an apparent mocking of New York Times reporter Serge Kovaleski, who has a physical disability. (Photo: AP)

Washington: President-elect Donald Trump on Monday lashed out at screen legend Meryl Streep, accusing her of being a Hillary Clinton "flunky" after the actress berated him at the Golden Globes ceremony.

Streep, a prominent Clinton supporter, blasted Trump for his divisive rhetoric as she received a lifetime achievement award at the glitzy ceremony in Los Angeles on Sunday.

She also ripped Trump for the infamous campaign speech during which he did a decidedly unflattering impression of disabled New York Times reporter Serge Kovaleski.

"Meryl Streep, one of the most over-rated actresses in Hollywood, doesn't know me but attacked last night at the Golden Globes," Trump wrote on Twitter. 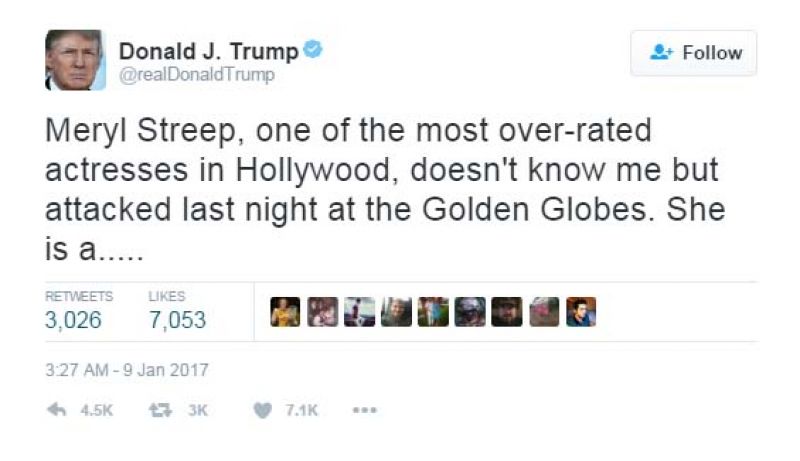 "She is a Hillary flunky who lost big. For the 100th time, I never 'mocked' a disabled reporter (would never do that) but simply showed him 'groveling' when he totally changed a 16 year old story that he had written in order to make me look bad," Trump wrote in a series of tweets. 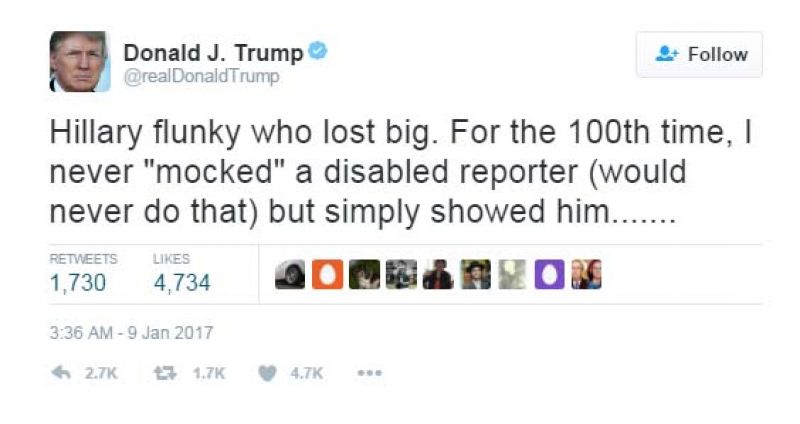 Earlier during her Golden Globe acceptance speech on Sunday, Meryl took a dig at Trump saying, "There was one performance this year that stunned me. It sank its hooks in my heart. Not because it was good. It was that moment when the person asking to sit in the most respected seat in our country imitated a disabled reporter."

The three-time Oscar winner was referring to a 2015 incident at a South Carolina rally when Trump flailed his arms and slurred in his speech in an apparent mocking of New York Times reporter Serge Kovaleski, who has a physical disability.

While Streep did not name Trump directly, she used almost the entire speech to criticize his behavior and policies, while calling for Hollywood to stand strong against any attacks and to support a free press through organizations such as the Committee to Protect Journalists.

The audience sat in stunned silence for much of it.

Streep earned a cheer from the crowd when she said that, "Hollywood is crawling with outsiders and foreigners."

"If you kick them all out, you'll have nothing to watch but football and mixed martial arts, which are not art," she said, as the audience cheered on.