She posted a photo of herself and her husband -- who proudly declares himself a feminist -- showing them holding hands and gazing into each other’s eyes. (Photo: AP)

Canadian Prime Minister Justin Trudeau’s wife set off a social media firestorm Tuesday, the eve of International Women’s Day, by suggesting that men should be celebrated too.

“As we mark International Women’s Day, let’s celebrate the boys and men in our lives who encourage us to be who we truly are, who treat girls & women with respect,” Sophie Gregoire Trudeau wrote on her Instagram account.

She posted a photo of herself and her husband -- who proudly declares himself a feminist -- showing them holding hands and gazing into each other’s eyes. 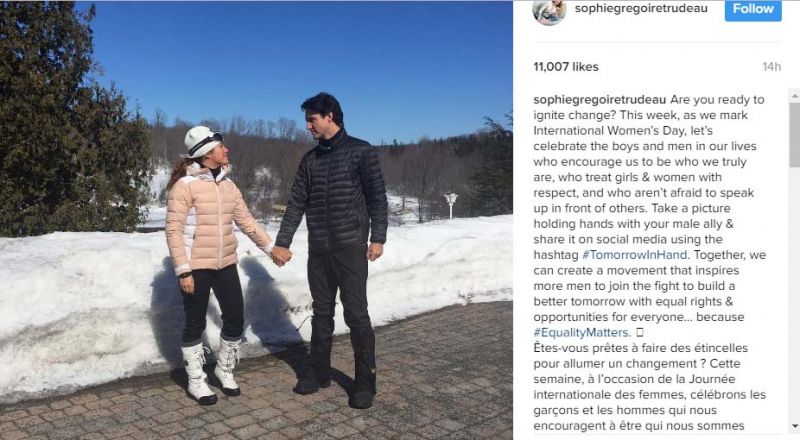 Gregoire Trudeau urged women to post a photo with their male ally.

Joining in this way could help “create a movement that inspires more men to join the fight to build a better tomorrow with equal rights & opportunities for everyone... because #EqualityMatters,” she wrote.

“I’ve never had to have my hand held,” conservative MP Michelle Rempel tweeted. “Women’s day is about women, not men!!”

A woman from Vancouver added, “This is so problematic I don’t even know where to start.

“International women’s day is a day to celebrate intersectional feminism and acknowledge the strides women have taken for equality while simultaneously acknowledging the active misogyny women and women identified individuals encounter on a daily basis. It is NOT a day about men.”

Gregoire Trudeau seemed to take the criticism in stride, saying in a post Tuesday night, “Well, now we’re having a conversation!”

“Our goal is gender equality, and fighting for it is going to require men and women working together -- raising our boys and girls to make a difference, hand-in-hand. This is about recognising that we should be allies on this journey,” she said.

US says Taliban talks in Doha were 'candid and professional'