Melania Trump is celebrating American patriotism at the White House this Christmas, incorporating red and blue into the traditional holiday green, adding a timeline of American design, innovation and architecture and studding a Christmas tree with her family’s annual ornament, the American flag. (Photo: AP)

Washington: Melania Trump is celebrating American patriotism at the White House this Christmas, incorporating red and blue into the traditional holiday green, adding a timeline of American design, innovation and architecture and studding a Christmas tree with her family’s annual ornament, the American flag.

The traditional gingerbread White House shares its stage with American landmarks including the Statue of Liberty and Golden Gate Bridge. 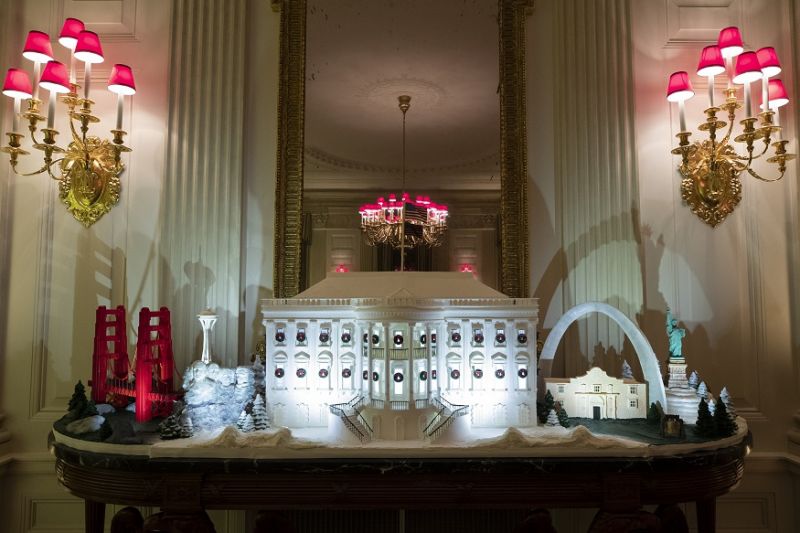 The White House made of gingerbread also features landmarks from around the country in the State Dinning Room during the 2019 Christmas preview at the White House in Washington. (Photo: AP)

“It is with great joy that our family welcomes you to the White House this holiday season as we celebrate the Spirit of America,” President Donald Trump, the first lady and their son, Barron, say in the signed introduction to a souvenir book visitors will receive as a holiday keepsake. “We hope you enjoy our tribute to the traditions, customs and history that make our nation great.” 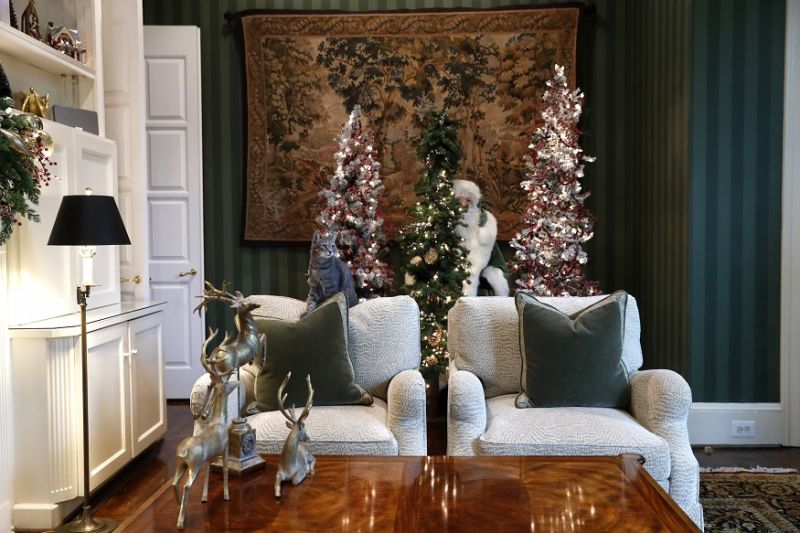 The White House previewed the decorations for journalists on Monday before Trump and the first lady departed for London. Journalists were also admitted to the grounds of the Naval Observatory, the official residence for Vice President Mike Pence and his wife, Karen, to see the Christmas decorations there.

The East Colonnade of the White House is lined with double rows of see-through panels etched with more than 60 examples of American design, innovation and architecture, ranging from the Woolworth Building in New York City to the Space Needle in Seattle.

A tree dedicated to Gold Star families that lost an immediate relative during military service stands at the beginning of the hallway while a tree decorated with the Trump family ornament — an American flag this year — glistens at the end of the colonnade. 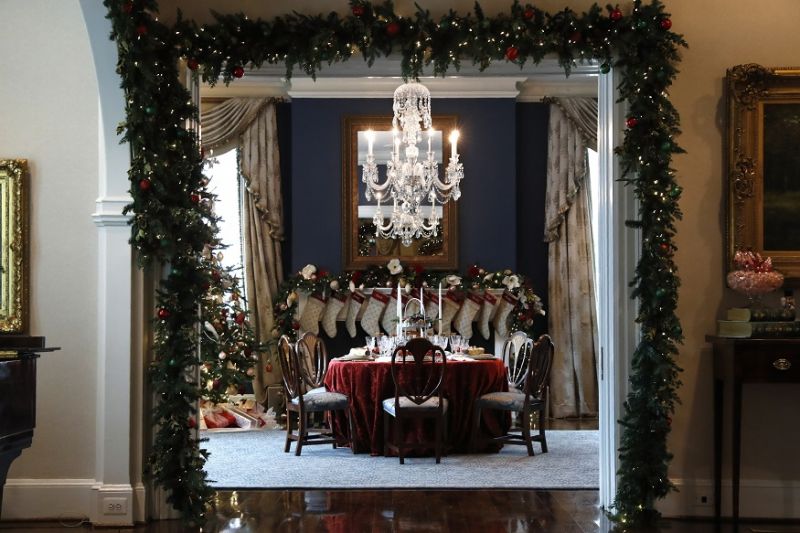 East Room decorations are inspired by the U.S. flag and feature gilded eagle Christmas tree toppers, mirrored stars and red and blue ribbons. In the State Dining Room, at the opposite end of the hallway, the decor continues to showcase American design.

The popular display also features models of some of the nation’s most famous landmarks, including Mount Rushmore, St. Louis’ Gateway Arch, the Alamo, the Liberty Bell and the Statue of Liberty, along with the Golden Gate Bridge and the Space Needle. 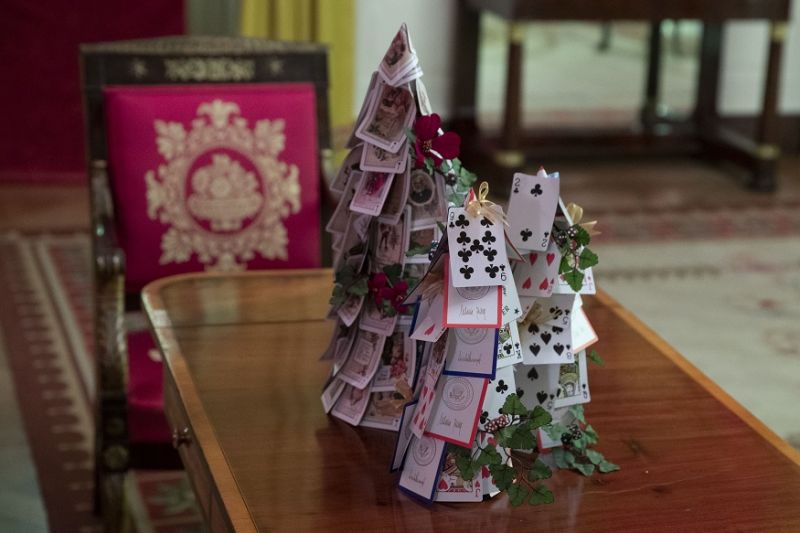 The Red Room is decorated with games, including a tree made of White House playing cards during the 2019 Christmas preview at the White House in Washington. (Photo: AP)

The Blue Room is again commanded by a towering tree, a 18 ½-foot Douglas fir from a Pennsylvania farm, decorated with flowers representing every state and territory. The Red Room is decorated with games, including trees made of White House playing cards bearing the president and first lady’s signatures. It’s meant to highlight her “Be Best” youth initiative and serve as a reminder of the kindness, respect and teamwork needed to play together.

Mrs. Trump continued her tradition of hanging wreaths on the mansion’s exterior windows, 106 in all. 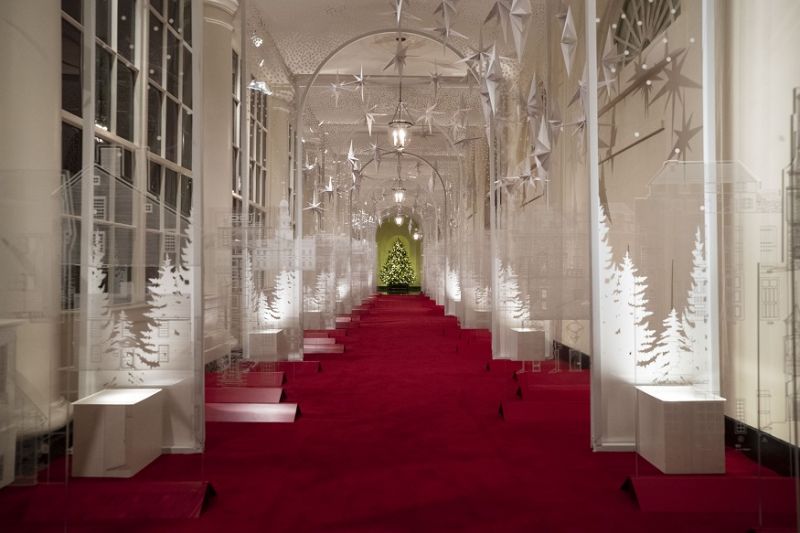 The East Colonnade is decorated with a timeline of American design, innovation and architecture during the 2019 Christmas preview at the White House in Washington. (Photo: AP)

Late Sunday, she teased her Twitter followers with a minute-long video sneak peek of some of the decorations as she walked through the State Floor of the White House to put finishing touches on the displays.

More than 225 volunteers flew in from around the country to help decorate the White House during Thanksgiving weekend. 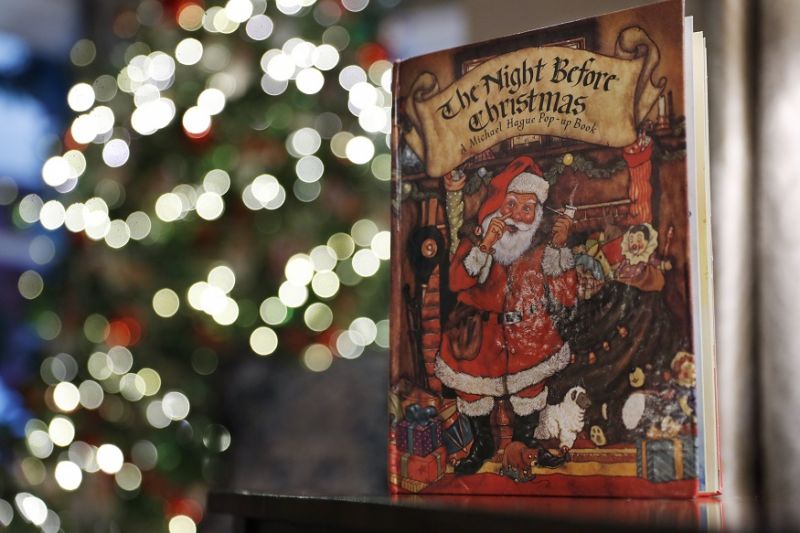 Decorations at the Vice President's residence include the book, The Night Before Christmas, in Washington. (Photo: AP)

At the Naval Observatory, more than 40 volunteers decorated Pence’s residence using 2,100 feet (640 meters) of garland and white lights, more than 160 red velvet bows and seven trees from a farm in Belvidere, New Jersey, to create a Victorian-themed Christmas.

Mrs. Pence said the theme “showcases the rich history of the residence and highlights the beauty of the special landmark that we are blessed to call home.” 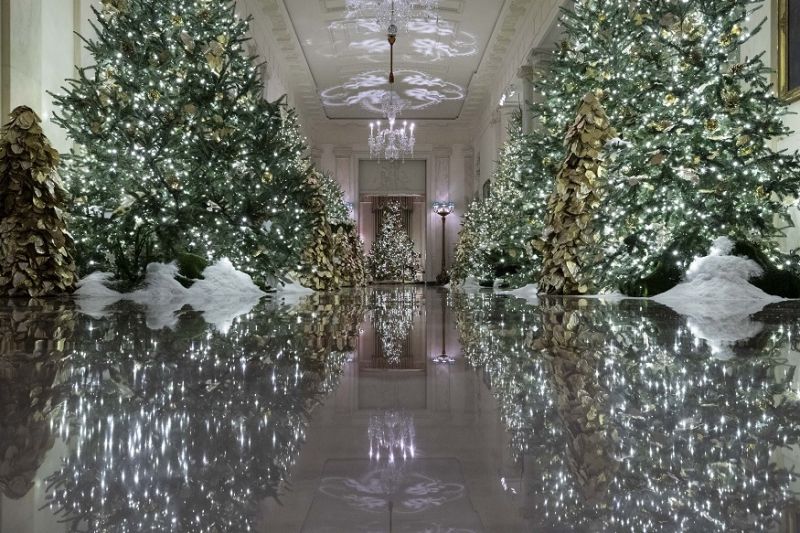 The Cross Hall leading into the State Dinning Room is decorated during the 2019 Christmas preview at the White House in Washington. (Photo: AP)

Eleven white stockings with red cuffs hang from the fireplace mantle in the dining room: one each for the Pence and his wife, their three children, their daughter-in-law, two soon-to-be sons-in-law and pets Harley (a dog), Hazel (a cat) and Marlon Bundo (a rabbit). 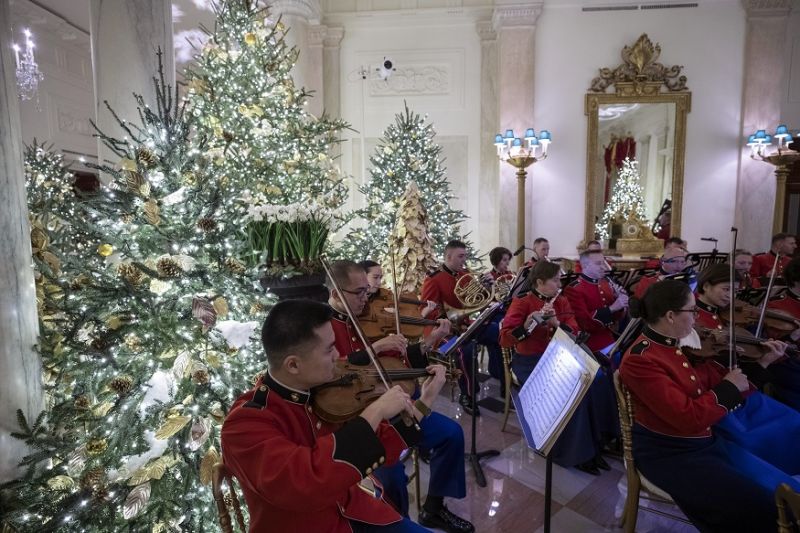 Marine Corps Band plays in the Grand Foyer during the 2019 Christmas preview at the White House in Washington. (Photo: AP)

The Pences also have a 70-pound (32 kilogram) gingerbread replica of their government-provided home on display.

Mrs. Pence, a watercolor artist, designed the family Christmas card showing the entrance to the house decorated with garland and a red bow, and a wreath on the white front door.

'A tragic mistake': US admits strike in Kabul killed 10 civilians, not IS militants

US students who took India's Covaxin, Russia's Sputnik V, asked to get re-vaccinated