Phoenix: An Arizona woman stabbed her three young sons to death and put their bodies in a closet before she tried to kill herself at their home, police said on Thursday.

The woman's brother called 911 after returning to the northwest Phoenix home late Wednesday and finding she had locked him out, Sgt. Trent Crump said.

The brother eventually entered the home and found his 29-year-old sister with self-inflicted stab wounds. While he was getting towels for her bleeding, she tried to drown herself in a bathtub, Crump said.

Officers found the dead boys - ages 2 months old and 5 and 8 years old - in a closet. The youngest boy's body was in a case of some kind in the closet, Crump said.

It was an "absolutely horrific scene for the officers and the brother," he said.

As she was being taken to the hospital, the mother told police her sons were staying with a baby sitter, and the brother told police the boys did regularly stay with that person, Crump said.

The mother was hospitalized in critical condition with neck and abdomen wounds, he said. She is expected to survive. 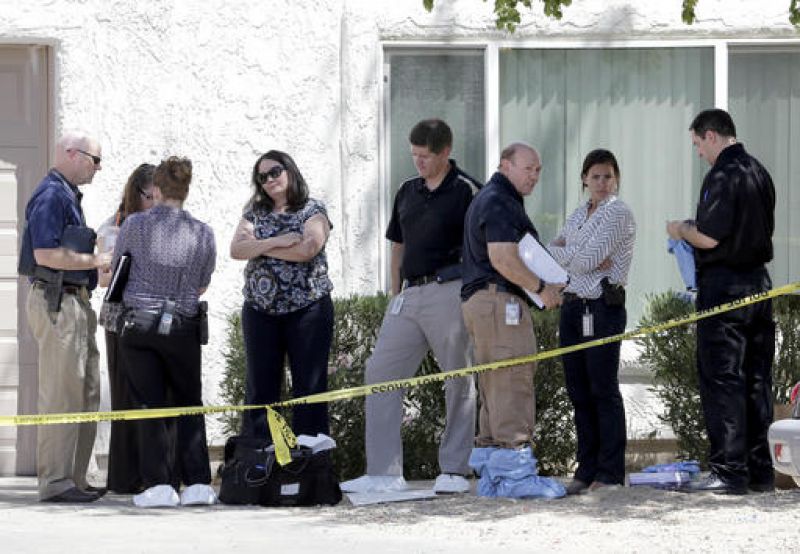 Law enforcement officials stand outside a home in Phoenix where three boys were killed during a several hour period. (Photo: AP)

"She will be in the hospital for some time with some very serious self-inflicted injuries," Crump said. "It's a murder investigation at this point."

No identities were released.

When the woman initially spoke with her brother in the garage after he returned home, she talked about what "she had found in life or what she needed in life," Crump said.

Beyond that, the woman's family members have no answers and "don't know what set this off," Crump said.

The woman and her children live with her brother and the siblings' mother, Crump said. "There's no father in the picture."

Residents said the neighbourhood of town homes is quiet, and the older boys frequently rode bicycles outside.

"Kids are supposed to feel good in this neighborhood," said Frank Segura, who lives across the street. "It's heartbreaking. They're just nice kids."

"I'm still processing all of this. It's very tragic because you don't know why this happen," Severns said.

The boys were killed sometime during a several-hour period after the woman's mother left for work Wednesday evening and her brother returned home from work before midnight, the spokesman said.

Crump said police had unconfirmed information that the woman might have been pregnant. "It may have been a reason why she had self-inflicted stab wounds" in the abdomen, he said.

He said police were unaware of any documented history of mental illness.

Boris Johnson wins no-confidence vote: but the margin will make him nervous

Abortion battles in US fire up after Supreme Court leak