The stage of Palestine

In what could be termed as the largest cultural exchange between India and Palestine, theatre groups Jana Natya Manch and The Freedom Theatre have come together to propagate the idea of freedom and liberation.

Theatre art has always been a strong tool to propagate ideas. In what could be termed as the largest cultural exchange between India and Palestine, theatre groups Jana Natya Manch and The Freedom Theatre have come together to propagate the idea of freedom and liberation. The collaboration between one of India’s most prominent theatre groups Jana Natya Manch, formed by Safdar Hashmi in 1970, and the Palestinian group, founded by Juliano Mer-Khamis in 2006, took shape to create awareness about the plight of the Palestinians.

The groups are travelling to 10 cities from nine states across India. “We are also conducting talks, discussions and holding seminars,” says Sudhanva Deshpande, the artistic leader of the project from the Indian side. Inspired by them, more such collaborations are taking place between artistes from both countries.

This collaboration developed organically, he says. “Over the last few years, we got interested in each other’s works. One lead to another and we reached out and established a personal contact.”

The Freedom Theatre (TFT) is not just a theatre group but they also run a theatre school. “They wanted to send their students to India to be trained in street art from us,” he says.

The groups have been received with considerable measure of success. “In Bhopal, over 43 groups came together to support and make it possible for us to perform. It just goes on to show that we have managed to ignite interest and the Palestinian cause itself,” he says.

The creative process was a very cohesive and collaborative effort, he says, “We decided to have a director from each side who worked with the artistes from both sides. We held several discussions and improvised a lot before we finalised the script. All the members from both the groups participated with a lot of gusto.”

They are now planning to take their plays to Palestine sometime in the coming months.

“Even though we do want to go there and perform, it’s not easy to travel to Palestine. Hopefully, we get the opportunity to perform there,” he says.

Faisal Abu Alhayjaa, artistic leader of this project from The Freedom Theatre (TFT), is all gung-ho about this trip.

“It’s been an amazing experience for us here. Experiencing the different cultures and languages has been truly enlightening,” he says.

Faisal also feels there are a lot of similarities between the two countries.

He says, “While India was oppressed for a long period, we are still suffering. So, when we talk about oppression, suffering and the pain back home, the older generation here understands.”

Is this why they chose to bring their group to India? “Absolutely! Also, we want to create awareness about what’s going on in Palestine. The media doesn’t present the whole picture, thus, as The Freedom Theatre artistes, we feel it’s our responsibility. We fight through art.” 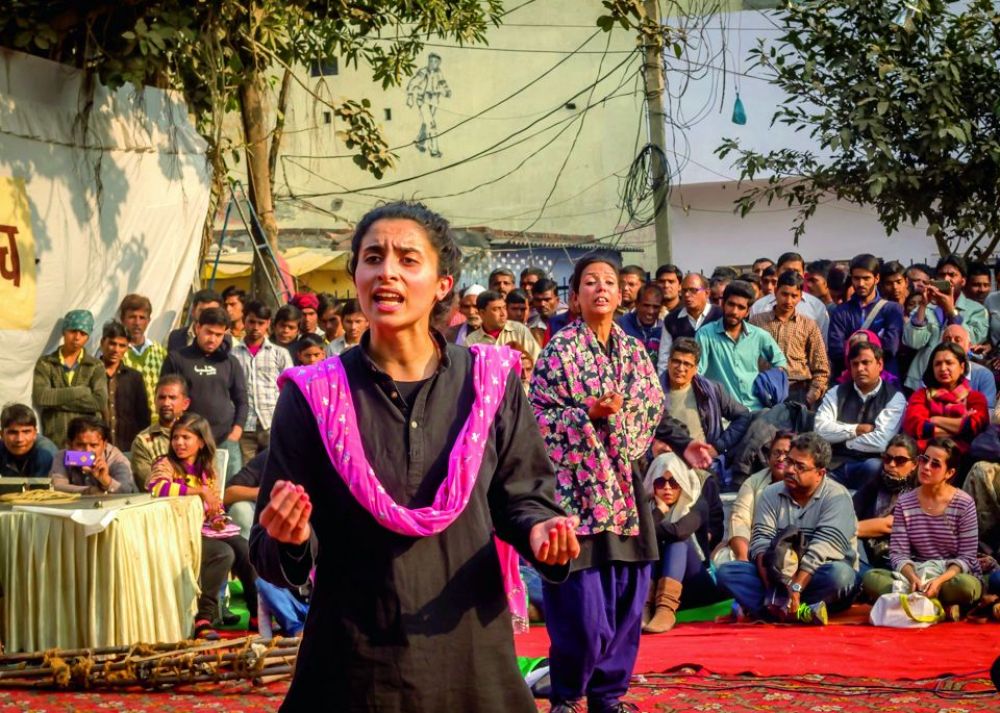 Members of Jana Natya Manch and The Freedom Theatre during a performance. The groups are travelling to nine cities across India.

Shedding light on the challenges they face as artistes in Palestine, he says, “We are under control from external forces all the time. We don’t move around freely; neither can we perform in several places. People are suffering and there is a lot of pain. Through theatre, we wish to create a cultural movement and send our message as Palestinians from the stage. We want to address issues like misunderstanding of Islam among other issues.”

The amount of sympathy Indians have shown towards the Palestinian cause has warmed his heart, he says. “Wherever I went, people received me with a smile. I wish to meet as many people as possible as we might be the only Palestinians they will ever meet, so it’s our responsibility to create a good impression of our country before we leave.”