Former French Open winner Ana Ivanovic was shaken up after a female spectator fell down the stairs during Serb’s second round match at the Australian Open. (Photo: AP)

Melbourne: Former French Open champion Ana Ivanovic was shaken up when a spectator was injured falling down the stairs on Rod Laver Arena but recovered her composure to ease into the third round at the Australian Open on Thursday.

The first set between the Serbian and her opponent Anastasija Sevastova was held up for 26 minutes as the woman was treated by medical staff in the stands of the showcourt.

Players leaving the court as play is delayed on RLA #AusOpen https://t.co/dlGDqLjEjv

"I felt really bad. I was really shaking, because the sound of the lady falling was really loud. I could hear it. I stopped immediately," Ivanovic said after her 6-3 6-3 victory.

"It just really didn't sound so good. It was actually good that we had to wait a little bit because I was really shaking, because I could imagine and it was not so nice. Then they told us she was bleeding, so I hope she's well." 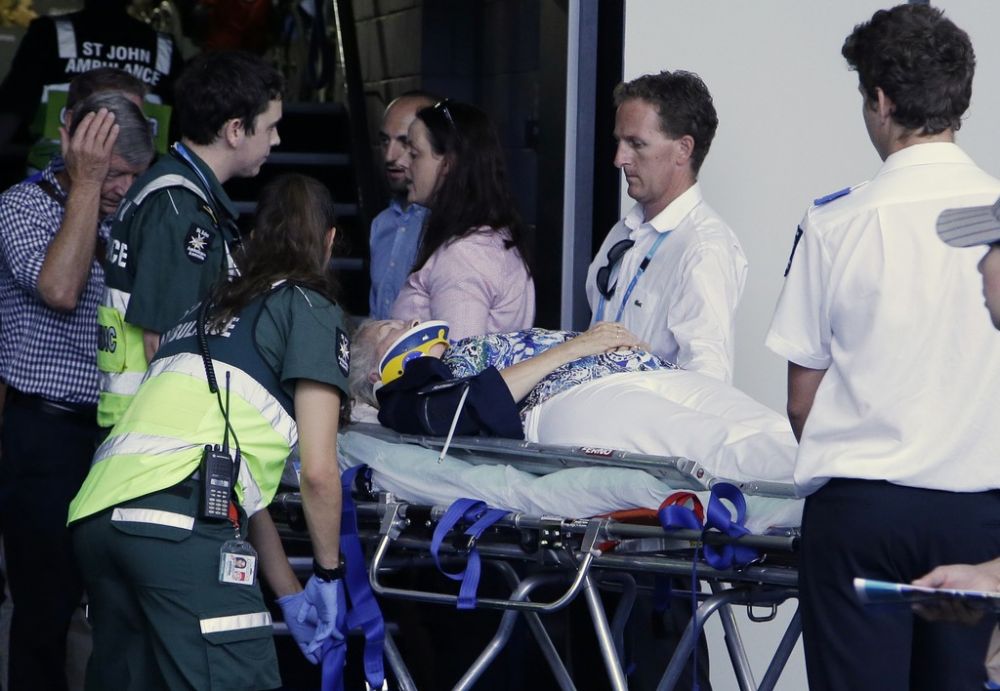 Tournament organisers said the spectator had been taken by stretcher to a first aid post for observation and further treatment. (Photo: AP)

It was the second time in the first four days of the tournament that play had been delayed while a spectator underwent medical treatment after Bernard Tomic's match against Denis Istomin was similarly disrupted on Tuesday.

Tomic was also rattled by the incident, saying he feared for the women's life.

"Potentially, someone's dying and we're not sure what's going on," the Australian said.

"At one stage, I was looking directly at the lady. It was not a good moment.

"Tennis is tennis, sport is sport. But if someone passes out or on dies on a tennis court, it can be very, very bad."

Apart from her concerns for the spectator, former world number one Ivanovic was delighted with her performance in her match-up with the 25-year-old Latvian qualifier.

Admitting that, at 28, she was now one of the "older statespersons" of the women's tour, Ivanovic said it was getting tougher to get through the early rounds of grand slams.

"It's completely different to when I started. I remember seeded even myself would you get to third, fourth round without dropping too many games," she added.

"And now every match it's a battle, and you just have to try and push yourself because it's all a challenge.

"They are young girls and they're fearless."

Ivanovic, a finalist at Melbourne Park in 2008, will face American Madison Keys or Kazakh Yaroslava Shvedova in the third round.