Xiaomi (probably) in process of manufacturing a smaller, yet powerful 4.3-inch Android.

Reports stated that Samsung will launch the Mini version of the Galaxy S7 with an SD 820 chipset in order to compete with Apple’s iPhone SE in the 4-incher segment. Well, as for now, that still remains a rumor. But here is another one.

ITHome spotted Xiaomi (probably) in process of manufacturing a smaller, yet powerful 4.3-inch Android smartphone. The device is claimed to sport a Snapdragon 820 chipset, which makes it a powerful mini smartphone that heads the pathway which Apple has taken for a smaller phone comeback. 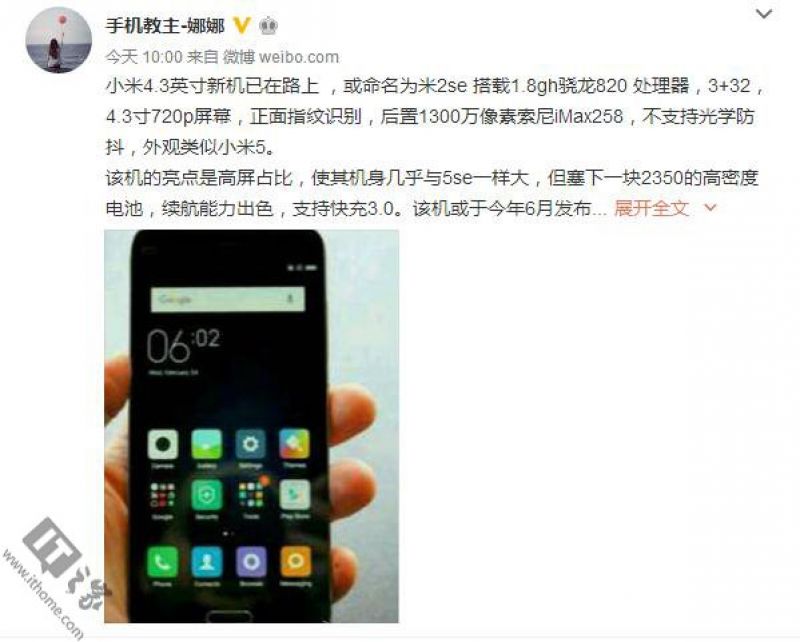 The mysterious phone from Xiaomi is also expected to sport a fingerprint scanner apart from a 13MP rear camera, 3GB of RAM, 32GB of storage and a 2350mAh battery. The phone is also said to support fast charge 23.0 and expected to retail at 1799 Yuan this June. There are no reports on when this smartphone will be made official, but there shall be more information ahead. The report also mentioned that the new Xiaomi phone could be called Mi 2 SE.

Not to go unnoticed, Xiaomi seems to be playing the same trick that Apple has pulled off with the iPhone SE by bringing back the smaller display. The Xiaomi Mi 2 was also having a 4.3-inch display.