The OnePlus 6T is a substantial upgrade over the OnePlus 6 on paper, considering the bigger battery, a new display, revamped cameras and the new in-display fingerprint unlocking system.

With the 'Never Settle' mantra, every year, OnePlus further fine-tunes its tried-and-tested recipe for producing a smartphone with top-shelf specs at a competitive price ratio, filled to the brim with flagship features. Four years ago, the OnePlus One was labelled as the 'flagship killer' and the last one launched  previously in 2018, the OnePlus 6, kept the philosophy alive — it was admired on the strength of rendering a speedy and robust performance with a cleaner user experience and a pair of highly capable cameras packed in premium and slick aesthetics.

Today, the Chinese company has shown off its latest OnePlus 6T, it's annual mid-cycle 'T' upgrade to the OnePlus 6. The company has refined the original design and added some intriguing new features. We got some time with the device before it was unveiled and our first impressions are certainly positive. 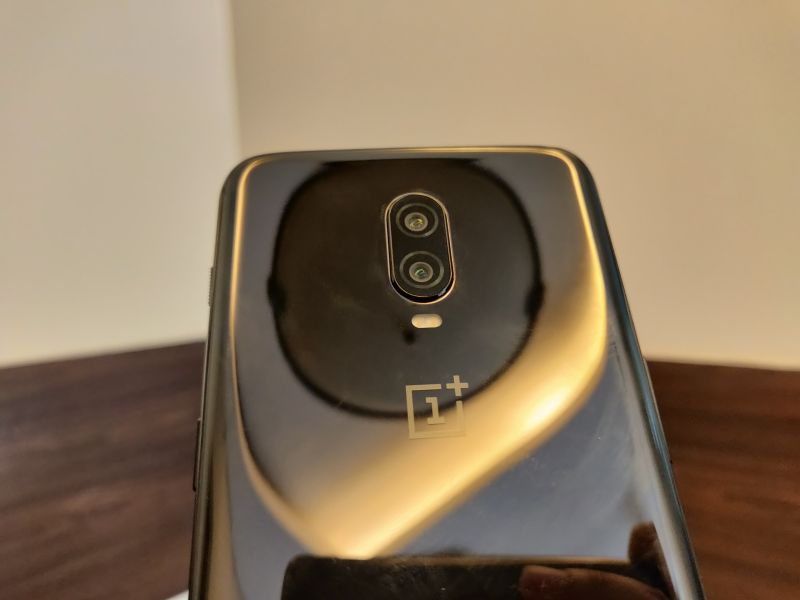 It’s not surprising that the OnePus 6T looks pretty much identical to its predecessor; however, you will notice lots of differences when you examine it closely. Yes, the smartphone still offers the premium metal-glass sandwich design, a premium build quality and retains the impressive AMOLED screen, but with a slight bump in display size — thanks to a shrunken notch. And the most hyped in-display fingerprint sensor makes the 6T different from its predecessor. 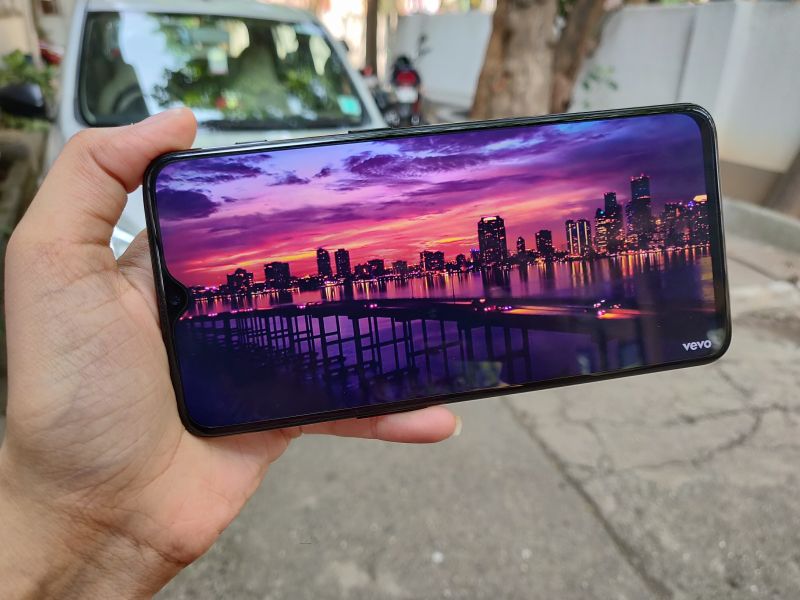 Bezel-less smartphones are all the rage since the last two years and manufacturers are pushing the screen-to-body ratio while trimming down on bezels as much as possible for a true full-screen experience. Similar to the Vivo V11 Pro and the OPPO R17, the OnePlus 6T now flaunts a larger 6.41-inch display with a screen-to-body ratio of 86 per cent — thanks to the tiny water drop style notch, and almost non-existing bezels, making it feel slightly taller and wider. 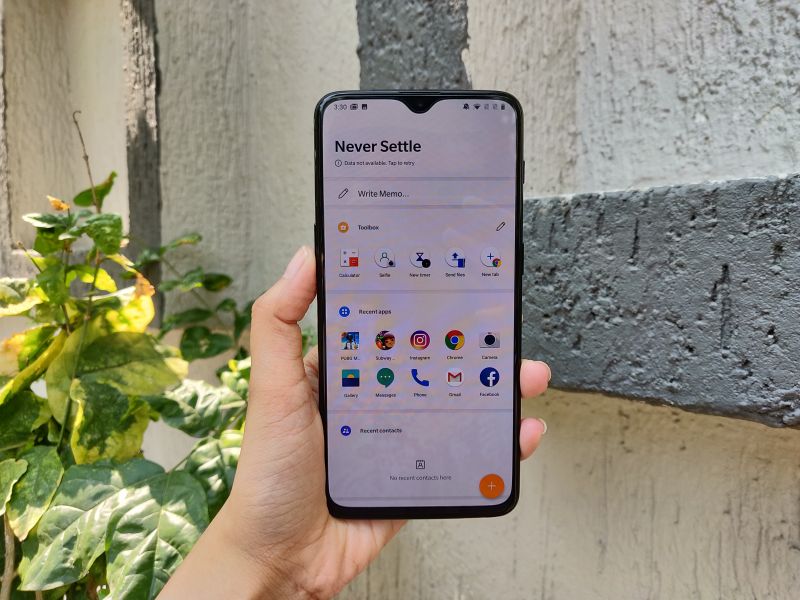 Since there’s only room for the front camera left, the earpiece now rests on the edge of the forehead and the sensors have been cleverly incorporated in and around the notch. The device throws up pictures at a pixels resolution of 2340 x 1080 with a 19.5:9 aspect ratio. Thankfully, OnePlus has opted for the newer and more sturdier Gorilla Glass 6, which is promised to be two times more durable than its predecessor. The display seems quite impressive at first glance, with AMOLED's deeper blacks drawing eyeballs. However, we will have to see how it fares on an everyday basis, especially in terms of sunlight legibility and brightness. 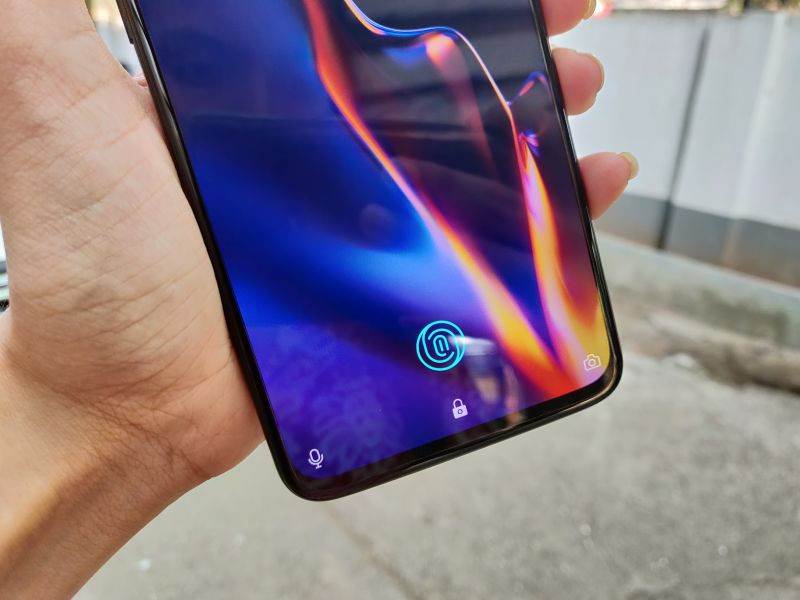 We already saw the in-display fingerprint sensor on previous Vivo and OPPO smartphones, and we have seen it evolving up to usable standards within a few months. OnePlus brands its take on the technology as 'Screen Unlock.' One can use it to unlock the phone (obviously) and launch apps quickly as well — just continue to press the screen after the display is unlocked for triggering the shortcut to one of your desired apps. A customisable app shortcut bar appears and moving your finger over the apps of choice and swipe up to launch.

While the incorporation of this new tech sounds cool, it is important to note that the tech doesn't seem to be as super fast. The unlocking speed seems slightly slow as the sensor needs to throw light at your finger before properly registering the fingerprint (an optical image sensor reads the data and matches it with previously saved fingerprint authentication data). Almost 95 per cent of the time, the system is fast and accurate. However, if you can't bother yourself with the in-display fingerprint sensor, there's still the superfast face unlock feature, which is impeccably the fastest amongst all the face unlock systems on smartphones out there. 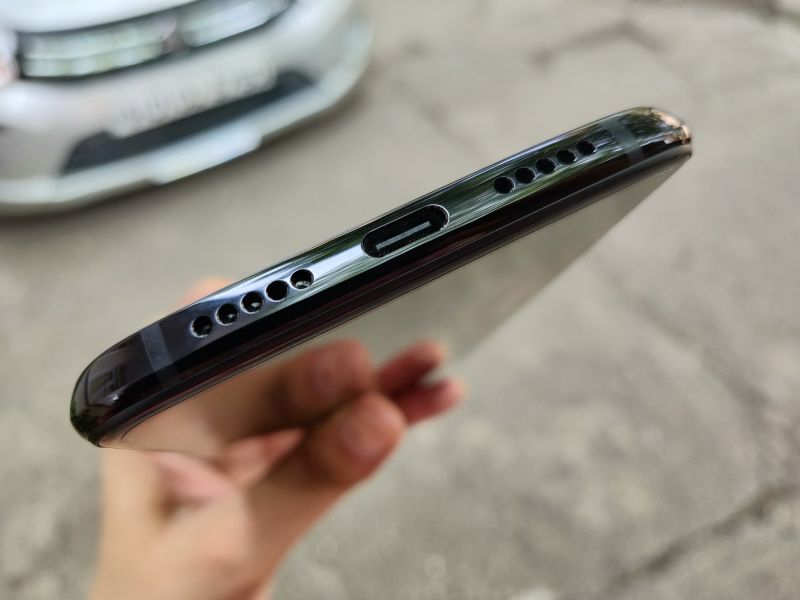 Following the footsteps of Apple, OnePlus too has eliminated the 3.5mm headphone jack, which may put off enthusiasts. The company says that the exclusion of the headphone jack was necessary to make room for the in-display fingerprint sensor. A USB-C to 3.5mm dongle comes bundled, but shipping a pair of Type-C wired headphones with the box would have been better. 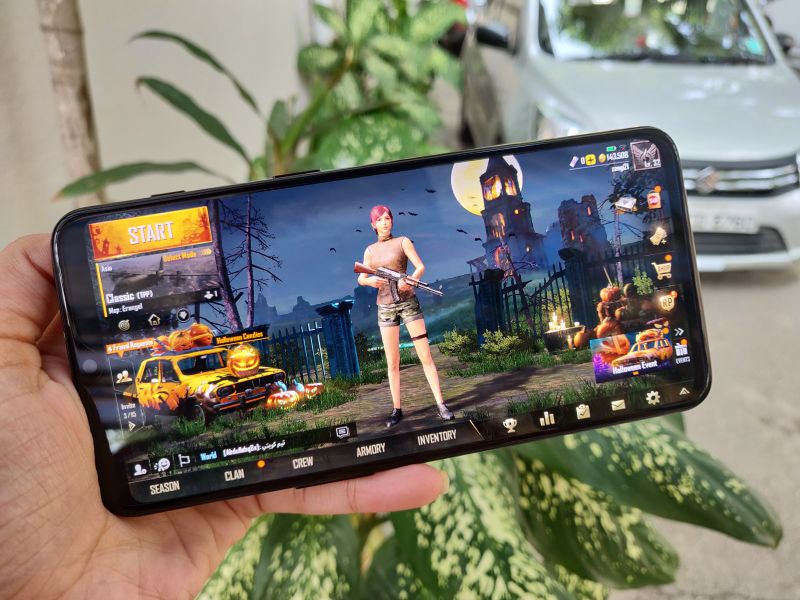 The OnePlus 6T employs the same 10nm Qualcomm Snapdragon 845 octa-core SoC clocked up to 2.8 GHz, paired with Andreno 630 GPU. The chipset is aided by 6GB/8GB of RAM and 128GB/256GB of internal storage. Like the OnePlus 6, the 6T also seems superfast out-of-the-box in typical OnePlus style. 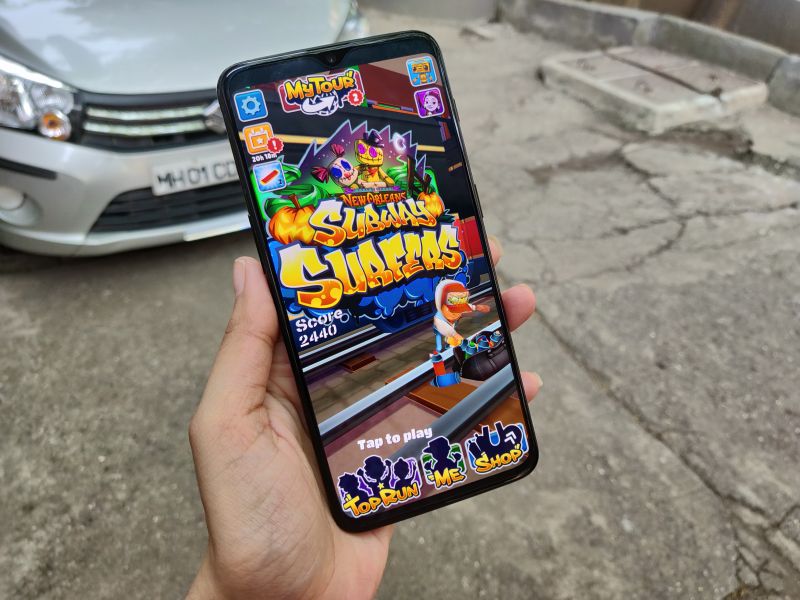 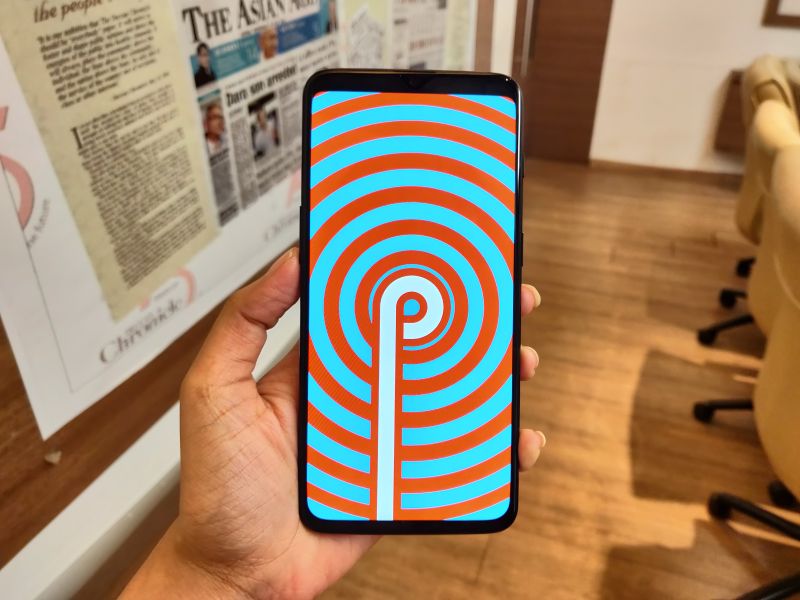 The 6T runs on Android 9.0 Pie with OxygenOS on top of it. While the company has maintained its supremacy in terms of delivering robust performance, the stock Android-like UI is intuitive, especially with its Android Pie-inspired UI elements. OnePlus' OxygenOS is now more fluid with smoother animations, coupled with useful features and some customisable options without including any bloat. 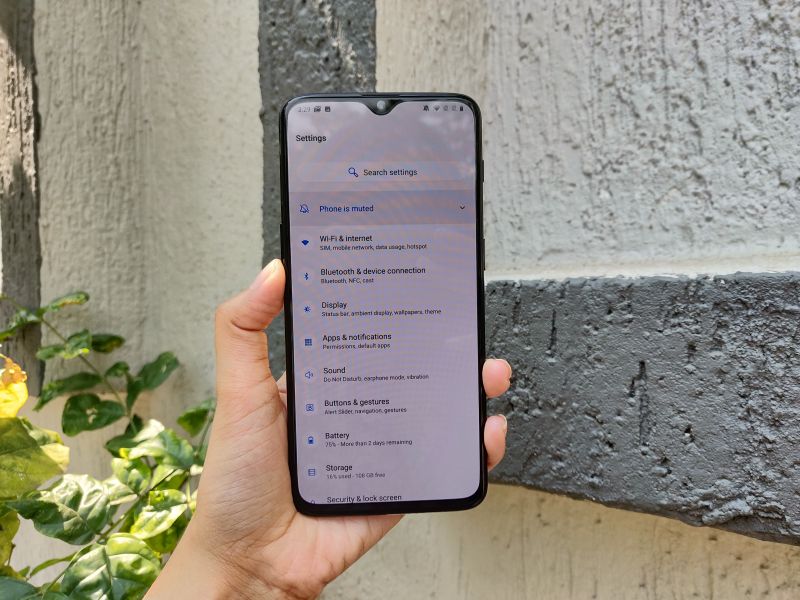 You get OnePlus' gesture-based navigation with OxygenOS along with Google's Pie-styled navigation gestures. One can also customise themes with any colour accent in the RGB spectrum. There's also an enhanced "Do Not Disturb" mode, game mode, smart boost, new shortcuts for toggling between recently used apps and more. There are several new features and additions, which we will explore and talk about later in our full review. 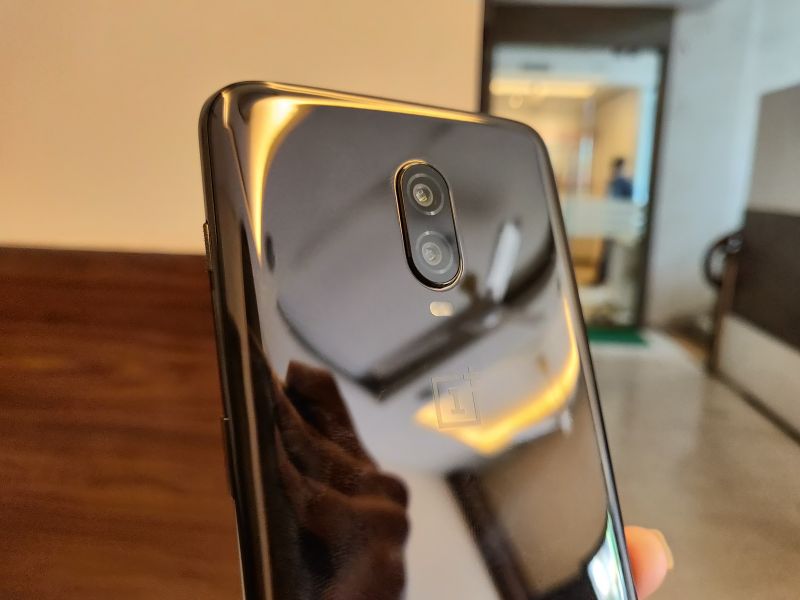 OnePlus is boasting its improved camera experience, especially in the low light department. The camera setup is identical to the OnePlus 6, but with an updated algorithm claimed to automatically adjust the parameters accordingly for both front and rear cameras. The dual rear camera setup, including a 16MP primary Sony IMX 519 sensor and an f/1.7 aperture and a 20MP secondary Sony IMX 376K sensor with the same aperture, is accompanied by a dual-LED flash. Upfront, the handset packs in a 16MP Sony IMX 371 sensor with an f/2.0 aperture. 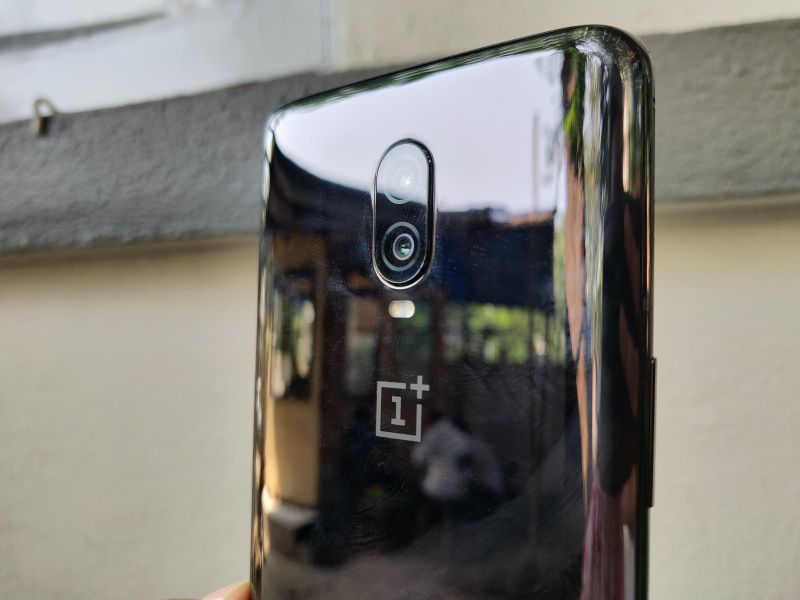 OnePlus asserts that the OnePlus 6T renders better portraits and selfies than its predecessor. With the addition of a night mode, the OnePlus 6T's camera is claimed to recognise better night scenes, and deliver brighter and vivid images with lack of noise, which seems nearly accurate. Additionally, the company asserts that the latest OxygenOS improves the overall dynamic range, clarity and edge detection in portrait mode.

The OnePlus 6T is a substantial upgrade over the OnePlus 6 on paper, considering the bigger battery, a new display, revamped cameras and the new in-display fingerprint unlocking system. However, we will put the 6T thorugh its paces for a much more detailed insight. Stay tuned for our full review.