Kreosan had a setup where he could apply 1 million volts of electricity to a mobile phone.

Every once in a while, somebody on the Internet tries to prove the durability of the trusty old Nokia 3310 feature phone. Whether it’s a drop test or protection from water, the 3310 comes out unscathed in most of the situations, which is why it has been christened the ‘brick phone’. Therefore, it wouldn’t be bad if someone was to hit the 3310 with 1 million volts of electricity, would it? Kreosan, a YouTuber, did that while pitting it against a modern Android smartphone. The result is kind of shocking.

Kreosan had a setup where he could apply 1 million volts of electricity to a mobile phone. The old 3310 went first for the test, where Kreosan slowly increased the voltage to 1 million. While the test was undergoing, the Nokia 3310 leaked the extra electricity that the device couldn’t handle, giving out an electrical thunderstorm-like effect. The phone ceased to operate during the test, with the display randomly going off and coming back to life, typing weird messages on its own. However, when a call was made to the phone, it still rang, showing the number of the caller. Once the test was over, Kreosan picked it up only to find that the 3310 booted up just fine without any issues. 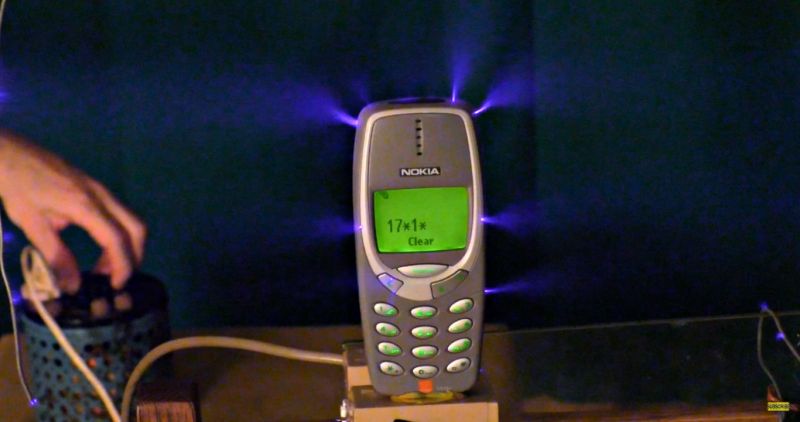 Kreosan tried the same test on a modern Android smartphone. Once the test was initiated, the smartphone started showing similar signs as 3310 — random stuff happening on the screen with weird texts and abrupt app openings. However, the smartphone was not in the same state as the 3310 — the display wasn’t responding to touches, essentially making it unusable. Kreosan even took apart the smartphone to figure out the problem and found that one of the components in the motherboard was burnt.

Therefore, like always, the Nokia 3310 walked away with the trophy of being the most durable mobile phone on the planet, this time surviving 1 million volts of electricity. If you have an old 3310 lying around, maybe this could be a convincing reason you would want to carry it around with you. However, we advise you against trying the electricity test on your own as it’s potentially harmful.