How to get the Samsung Galaxy S8 theme on Xiaomi's MIUI 8?

DECCAN CHRONICLE. | AMRITANSHU MUKHERJEE
Published Apr 29, 2017, 5:01 pm IST
Updated Apr 29, 2017, 5:08 pm IST
The latest iteration of TouchWiz on the Galaxy S8 has made the Samsung Galaxy series desirable. Here’s how you can get it on a Xiaomi device

When the Samsung Galaxy S8 came out a few days back, everyone around the world was surprised by the revolutionary hardware design that Samsung had pulled off. The phone oozes desirability, unlike any other smartphone. However, a lot of us were surprised when Samsung unveiled the latest version of the TouchWiz UI that would become the face of the powerful Samsung flagship. For the first time, Samsung’s software got the presence of its glamorous hardware and is making it a must-have addition to your wish list.

Now, there are many people who are not able to get the Galaxy S8 for some reason but are itching to get the feel of the device on their own handsets. If you remember, when the Google Pixel came out, the Android community went mad over the Pixel launcher, which then made its way to the masses in the form of various launchers. The Galaxy S8 hasn’t been on the market for many days, which is what no proper launcher imitating the new TouchWiz is available.

However, Xiaomi’s MIUI is a highly customisable Android interface that provides tons of options to overhaul the look of your phone in unimaginable ways. Someone by the name of Codor Stelian has created a replica theme of the Galaxy S8’s version of TouchWiz on the Mi theme store. The theme goes by the name of sGalaxy and provides a 90 percent replica of the Galaxy S8’s wonderful interface. The theme weighs around 13.3Mb and can be easily downloaded on your Xiaomi smartphone. 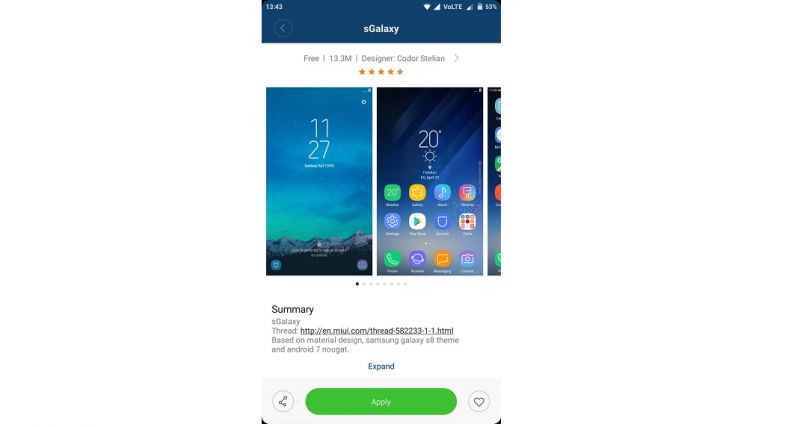 Once you download the theme, tap on “Apply” to activate the theme on your Xiaomi device. Once applied, you will notice the familiar clock and weather widget from the Galaxy S8 on your MIUI homescreen. The widget shows the time and date turn by turn. You will also notice the Galaxy S8 icon pack applied over the standard MIUI interface. You also get the familiar Galaxy S8 wallpapers applied by default on this theme. 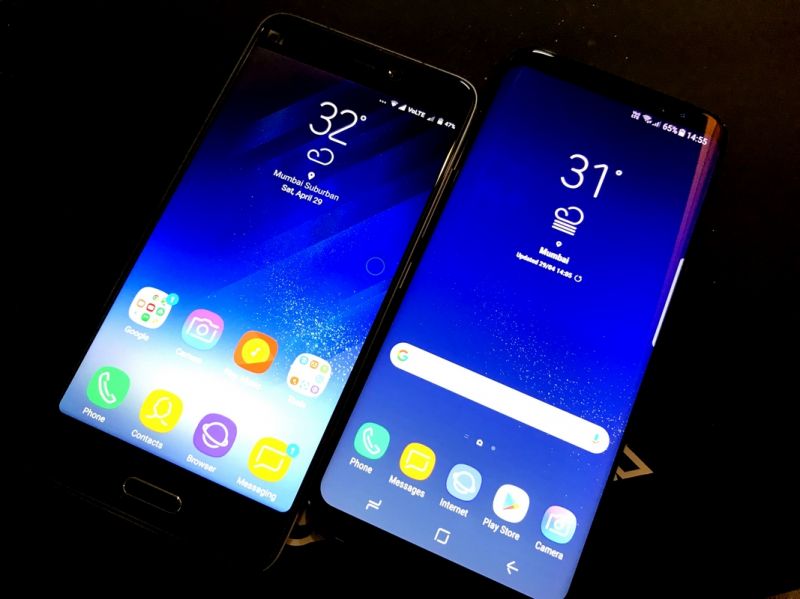 The notification centre also receives a Galaxy S8-esque visual overhaul. You will see dark blue hues over the notification toggles. The new layout also accommodates more toggles than the standard theme of the MIUI 8. 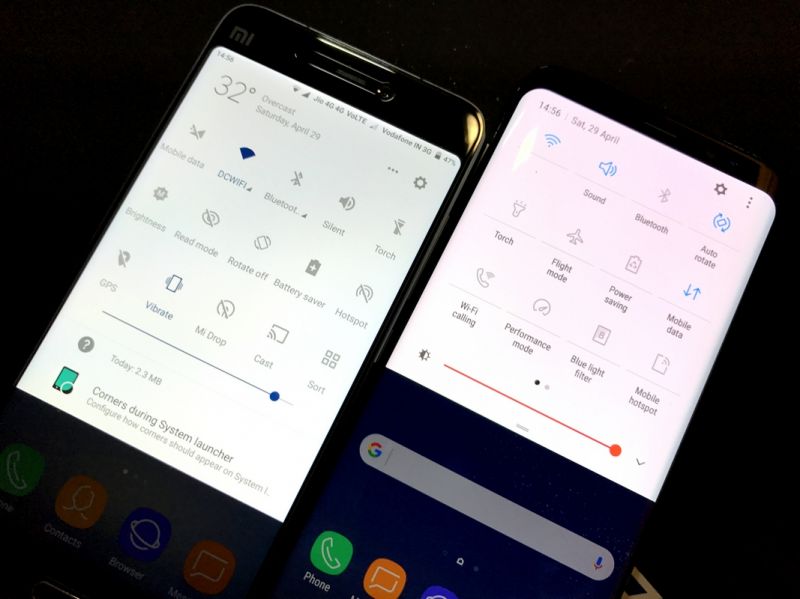 The lock screen also receives the clock widget and the wallpaper from the S8. the lock screen wallpapers change within a set duration, utilising the Carousel feature of the MIUI lock screen. 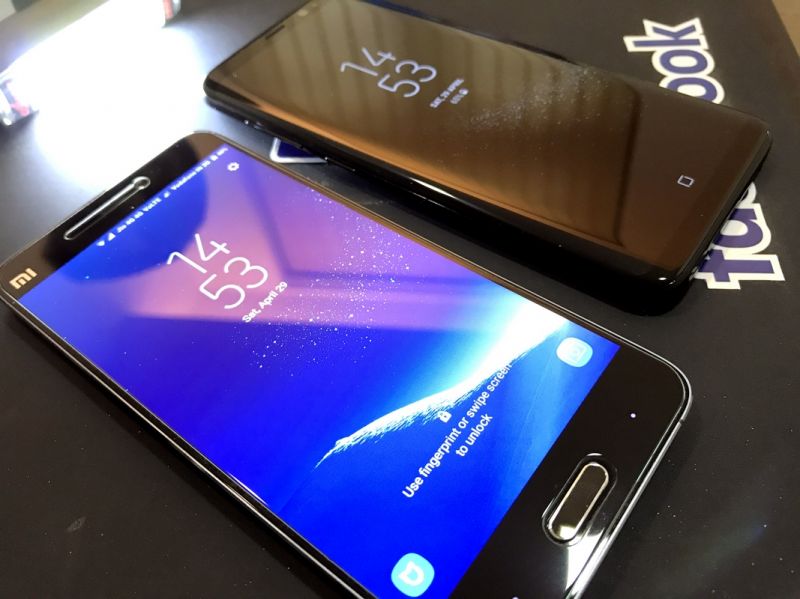 There is one more method to get the full experience of the Galaxy S8 on your Xiaomi device. If you have seen or noticed the S8’s screen carefully, the corners of the display have round edges that provide a posh look and feel to the device. You can get those rounded corners on any Android phone with the help of certain third-party apps.

Cornerfly is one such app that smoothens the edges and provides round corners on your phone. The free version gives options to adjust the corners individually and change the colours as well. With the paid version, you can adjust the size of the corners on your phone. We tried that out on our Xiaomi device and it complimented the sGalaxy theme, thus making it look like the actual TouchWiz interface from the Galaxy S8. 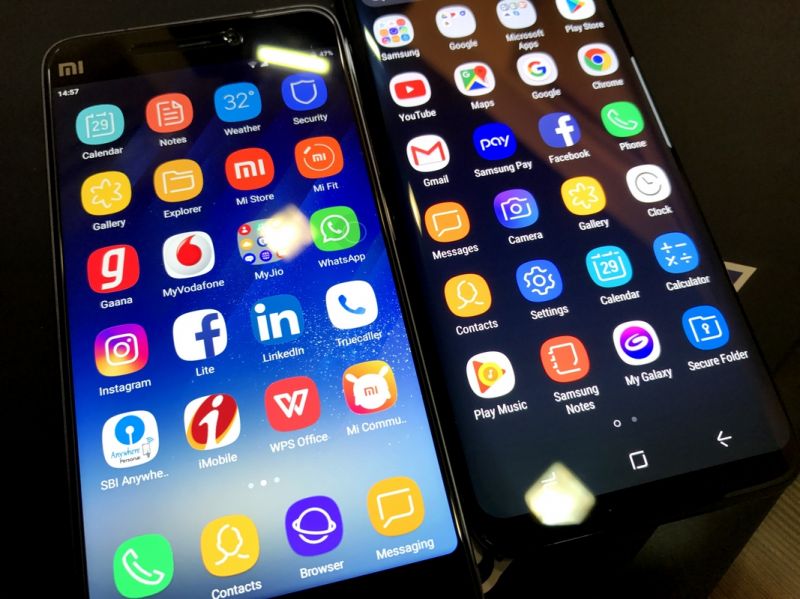 Note the curved edges on the Xiaomi device, thanks to Cornerfly.

The Galaxy S8 is not the only flagship with a desirable UI that people want to get a feel for on their smartphones. The iPhone has been the major choice of launcher developers for years. There have been many launchers and widgets available on the PlayStore  – right from replicating the fonts and icons to embedding the control centre. The Google Pixel’ UI also received lots of love from the Android community. Popular launchers like NOVA launcher and ADW Launcher 2 implemented the Pixel’s UI as their default theme.