It seems like Samsung’s troubles are far from over. A new report comes in from China where a user tweeted that his ‘Safe’ Samsung Galaxy Note 7 exploded. Fortunately, nobody was hurt. (Photo credit: CNN)

It seems like Samsung’s troubles are far from over. A new report comes in from China where a user tweeted that his ‘Safe’ Samsung Galaxy Note 7 exploded. Fortunately, nobody was hurt.

CNN Money reported that a new Samsung Galaxy Note 7 was purchased online by a customer in China and the device burst into flames after he found something amiss.

According to the customer Hui Renjie, a 25-year-old techie, said that he had purchased the Note 7 from an online retailer JD.com, which was delivered the same day. Hui said that he charged the Samsung Galaxy Note 7 overnight, but when he came back to it the next morning, he saw something was wrong. He noticed the phone emitting black smoke, while it was still connected to the charger. And after some time, the phone burst into flames. The fire also damaged his MacBook. 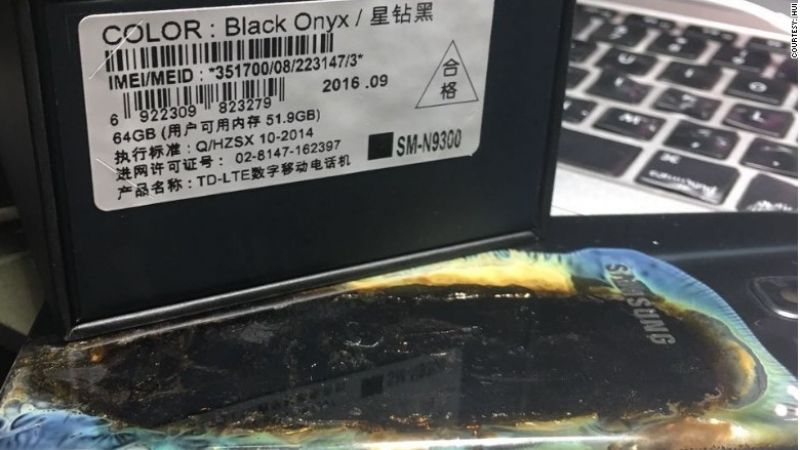 Hui posted the video online, which shows the display cracked and smoke emanating from the Galaxy Note 7 while still being connected to the charger.

CNN reports that they could not confirm the authenticity of the video. However, Hui sent back a photo to CNN which shows the receipt and photographs of the incident to support his version of events.

Samsung is said to be investigating on the incident.

Samsung has been taking a big blow after the launch of their flagship Galaxy Note 7 handsets are reportedly ‘blowing up’. Samsung claimed that the reason for the exploding devices were faulty batteries from one of their single suppliers. Samsung has recalled all the Note 7 devices sold and is replacing them with safer ones.

The safe Samsung Note 7 devices will feature a Green Battery icon on the display as well as a Black Box symbol on the packaging to confirm that the devices were safe replacements.

Also read: How to identify a ‘Safe Galaxy Note 7’

CNN also reports that China was not included in the global Note 7 recall since the Samsung earlier said that batteries in phones supplied to China were from a different battery supplier. However, there have been four reports of battery fires in China since then. In one case, Samsung’s investigations revealed that the reason for the Note 7 fire was from an external heat source and not the battery itself.

Aviation authorities around the world have also warned against the use and charge of the Samsung Galaxy Note 7 on airplanes.

In India too, the DCGA has restricted the use of all Samsung smartphones on flight after a recent incident of a Note 2 catching fire onboard an Indigo airline from Singapore to Chennai.