Budget iPhone to be delayed, issues in production schedule

One of these two devices and the budget variant are highly likely to offer even dual-SIM variants in a few selected countries. (Representational Image: Ben Geskin)

After all the rumours and leaks, we are pretty sure that Apple will be rolling out three new iPhone models — 6.1-inch iPhone X, 6.5-inch Plus version and a 6.1-inch budget iPhone model with the LCD screen. Earlier we had reported that the cheaper version would see a delay in launch for some reason. It has now been confirmed that it will come a few days after the premium models.

Owing to some instability of the production schedule, the lower priced iPhone will see the light of the day by October. On the other hand, the alleged iPhone X successor and the iPhone X Plus model should be launched by the end of September. One of these two devices and the budget variant are highly likely to offer even dual-SIM variants in a few selected countries. 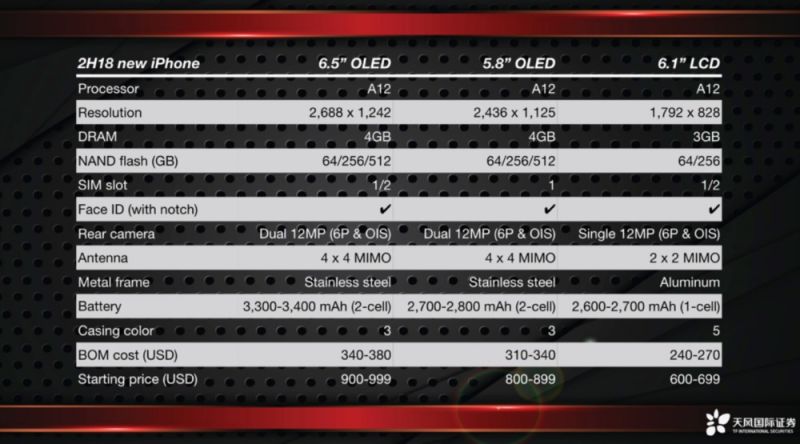 More expected details about the upcoming Apple smartphones have surfaced over the internet now, thanks to the spec sheet shared by Apple analyst Ming-Chi Kuo. This reveals that the trio of new iPhones will feature the notch display along with the function of Face ID. While the premium OLED versions will be bearing the stainless steel frame, the LCD variant will be build around the lower grade aluminum frame which in turn will tweak its looks.

Another difference which will be seen amongst the budget and premium models will be on the camera front. The OLED iPhones will come equipped with 12MP dual cameras while the LCD phone will incorporate just a single 12MP sensor. Another noticeable clarification given by Kuo is that, contrary to the recent rumours, the upcoming iPhone won’t have support for the Apple Pencil Stylus.