Samsung Galaxy A50s review: The A50, but with a better camera!

The A50s still has the simple minimalist design and the solid build quality from the A50 with the new geometric design on the back.
Rating:

In what could be called the renaissance of modern mid-range devices, Samsung has firmly held its ground in the market, and largely so because of one key element, adaptability. A never-ending phase of continuous evolution is what sets Samsung apart from every brand out there. They have their wins and fails, but they move on. They aren’t always the first to implement new tech, but when they do, you know it works better, probably even in ways you didn’t imagine.

The brand has now revamped its mid-range lineup with new variants of phones including the popular Galaxy A50. The new variant, the one we have in for review today, is called the Galaxy A50s. While not a whole lot has changed from the good A50, which isn’t even old enough for an upgrade yet, key upgrades like the 48MP camera and a newer processor to the device mean the brand can still stay relevant in the segment.

We review the upgraded device to see if the phone still competes with other beasts that have been popping up in the mid-range lately.

The Galaxy A50s design is exactly like the older Galaxy A50. The power and volume keys still go on the right while the SIM tray goes on the left. The bottom still houses the 3.5mm jack, USB-C port, primary microphone and speaker grille in the exact same spots, while the top has an identical placement of the secondary noise-cancellation microphone. Even the 6.4-inch super AMOLED screen is the same one used on the A50. The triple camera layout on the back is also placed at exactly the same spot. 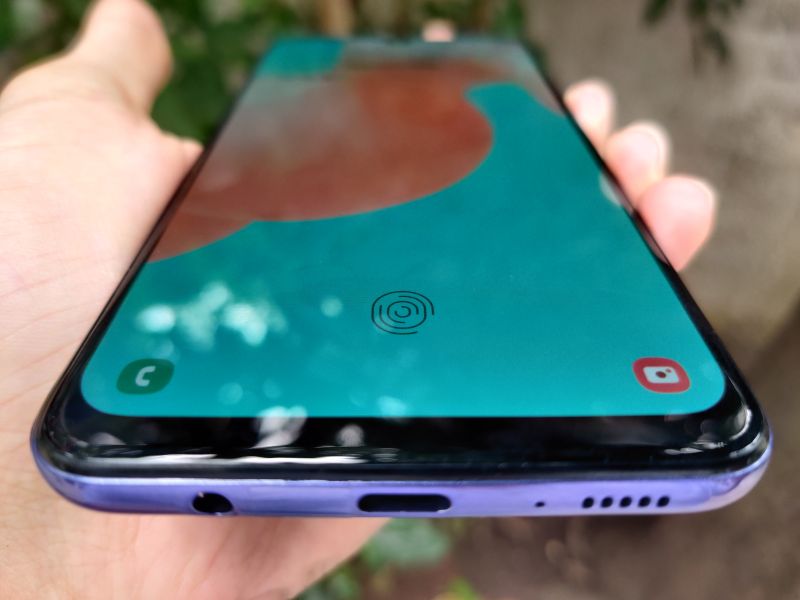 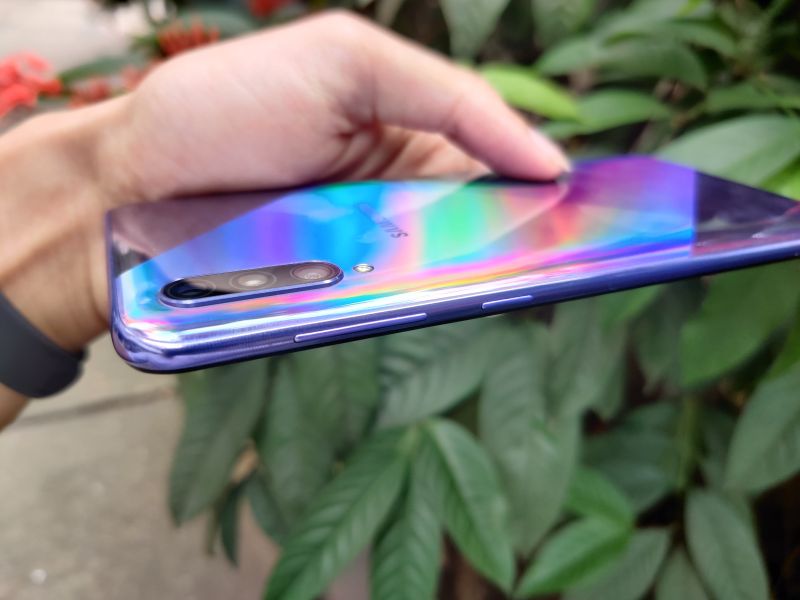 So what is different? Well, the only change visible to the eye is the new geometric finish on the back, which is something a lot of brands have been going with recently. The other changes are under the hood, and we’ll talk about them later. The lack of notable change in the form and factor isn’t necessarily a bad thing. The A50s still has the simple minimalist design and the solid build quality from the A50 with the new geometric design on the back. If there’s nothing wrong, why change it?

One of the pros on the screen of the Samsung A50, like most Samsung mid-rangers, was the vivid screen and the A50s uses the same 6.4-inch 1080x2340 pixel Super AMOLED screen. With a 403ppi, it is not a bad screen at all. The colours are vibrant, the brightness is good outdoors and the text is crisp. Thanks to the AMOLED panel, you also have deep blacks and great overall viewing angles. There is a dew-drop notch on the top for the front camera. 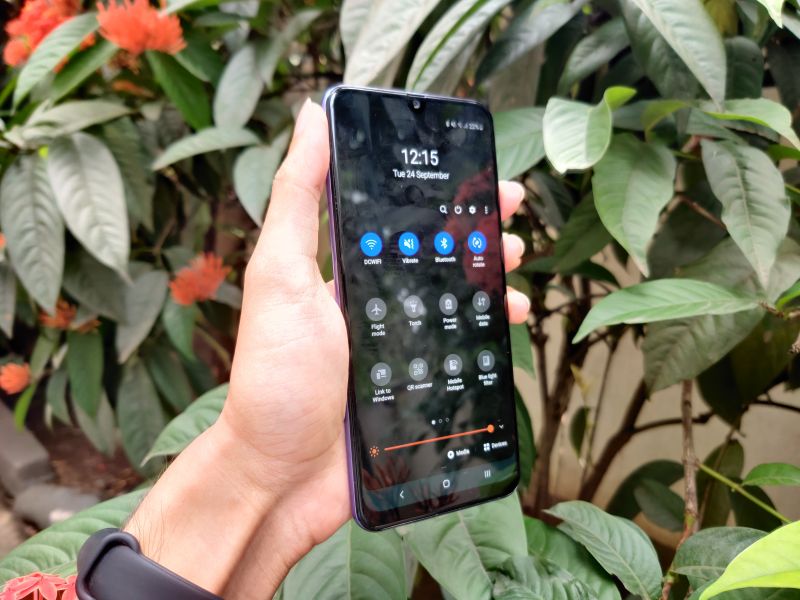 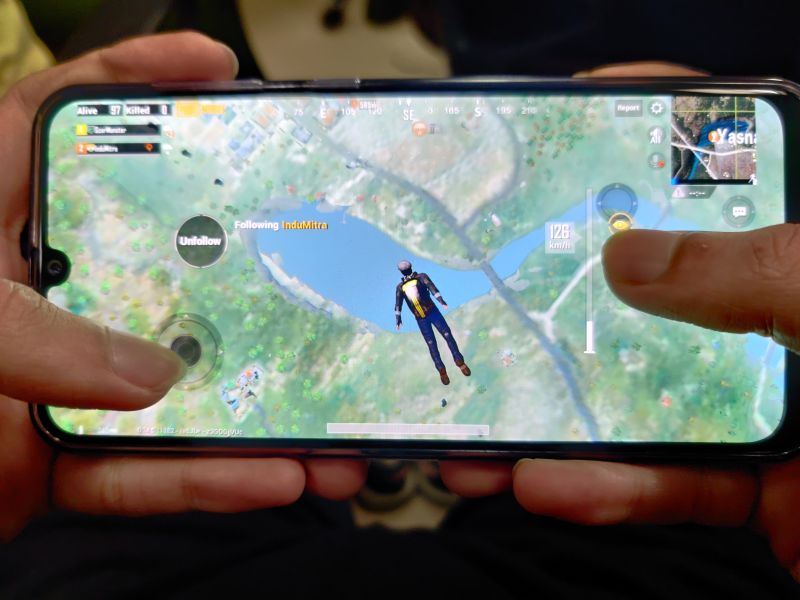 The bottom of the screen features an optical fingerprint sensor that works decently. It is accurate but lies slightly on the slower side compared to the fingerprint sensors we’ve used in the segment. It is not a deal-breaker but yes, it could have been faster.

The A50s runs on Samsung’s One UI on top of Android 9.0 Pie. While far from stock, One UI retains a fairly similar structure to the vanilla Android experience and is leaps and bounds ahead of every other custom skin Samsung has implemented over the years (That’s you, TouchWiz).

The UI is heavy and while that doesn’t restrict your experience, you will very rarely find the odd stutter in animations. Elements like RAM management, quick switching between apps and the overall usability of the phone aren’t affected by the weight of the UI at all. Instead, you get a plethora of features that come with One UI like the night mode, the Bixby integration, the battery management, the customisable Always-On display, the smart edge bar, and countless other tweaks. This is the same UI that runs on the flagship S and Note series. That brings here pretty much everything from these devices that the hardware on the A50s can support.

The bloat is minimal and most of the pre-installed apps are ones you’ll probably use. These include apps from Google and Microsoft, Netflix and Prime Video. Regardless, if you don’t want them, these and other apps can be uninstalled easily.

The camera is the biggest area where the phone beats the older A50 and shines. The phone has a triple camera setup on the back consisting of the primary 48MP lens along with the same 8MP ultra-wide lens and 5MP depth sensor. The front-facing camera also packs a 32MP sensor instead of the 25MP one on the A50. 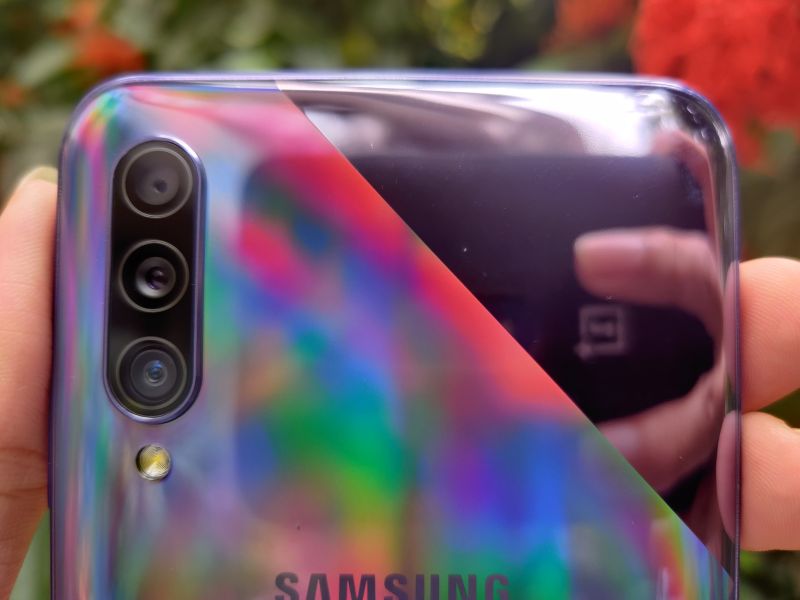 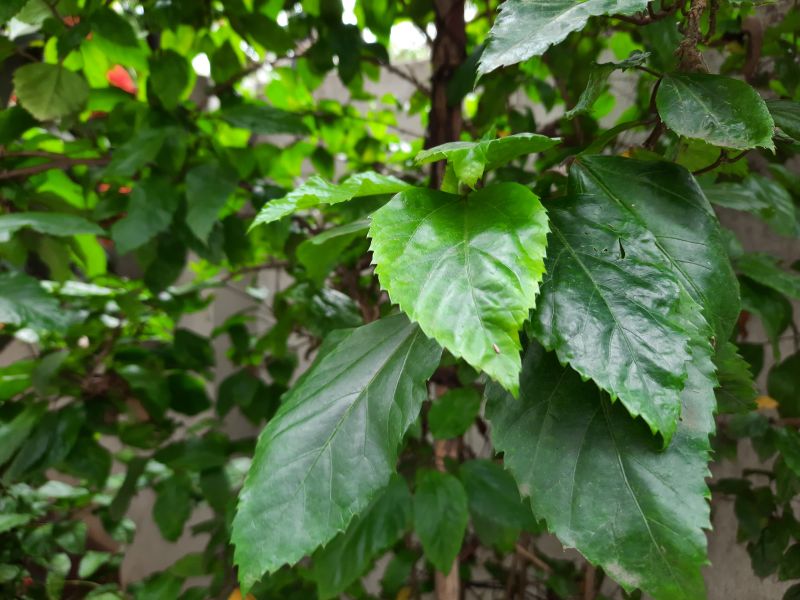 The primary 48MP lens on the Samsung A50s puts the camera ahead of most implementations of the Sony IMX586 found on other mid-range devices. Pictures are very crisp and the colours have a deliberate touch of saturation that makes the pictures pop out with punchy colours. While the default mode takes 12MP shots, you can use the aspect ratio switcher to switch from 4:3 to 4:3H to take high-resolution 48MP shots. Note that when you switch to 48MP mode, you lose out on picture enhancing elements like HDR, but you can still use the handy scene optimiser. 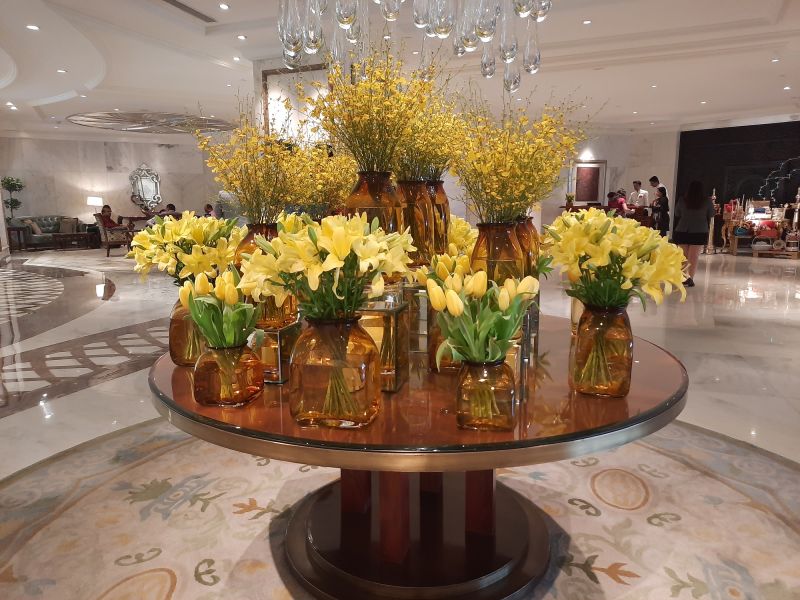 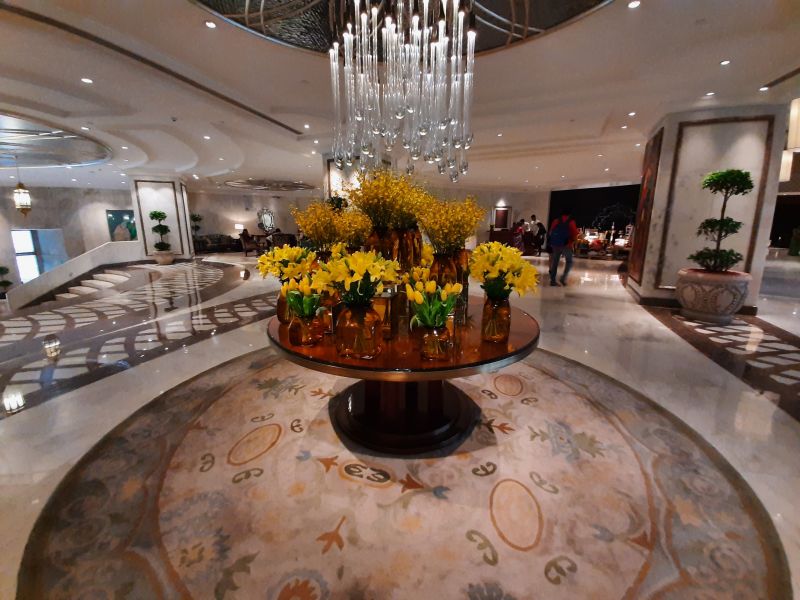 A Samsung A50s shot taken with the main and ultra-wide lens.

The ultra-wide lens captures pictures at 123 degrees FOV (field of view) which is one of the widest angles out there. While this results in wider shots, it also warps the edges of the frame slightly more than regular ultra-wide shots taken with other phones. Also, we didn’t find a software-based correction for the ultra-wide warp effect in the settings either. That, however, doesn’t take away from the experience at all and this is a more than capable wide-angle lens in its own right! 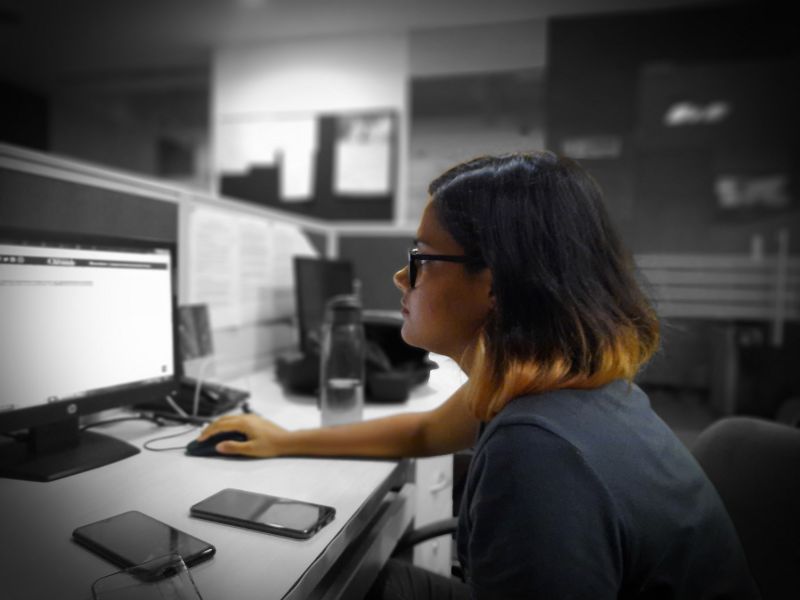 Samsung A50s shots that use the Live Focus mode are great with accurate edge detection.

The depth sensor provides excellent results when taking a portrait or bokeh shot and the accurate edge detection allows you to edit and enhance shots after clicking them with various blurring, warping, colouring effects.

The front-facing camera is 32MP and detailing in shots is top-notch irrespective of whether you take pictures indoors or outdoors. Colours come out to be great and tons of software features allow you to get creative. There are also AR emojis that allow you to either pre-select from various cartoon characters or create customisable emojis of your own face. These emojis will track your facial expressions accurately in selfies, even detecting individual eyes closing and opening. 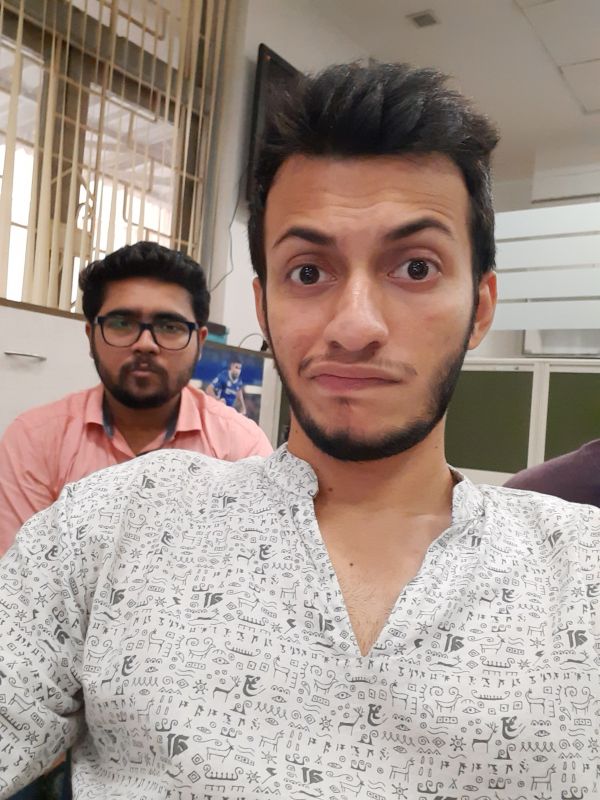 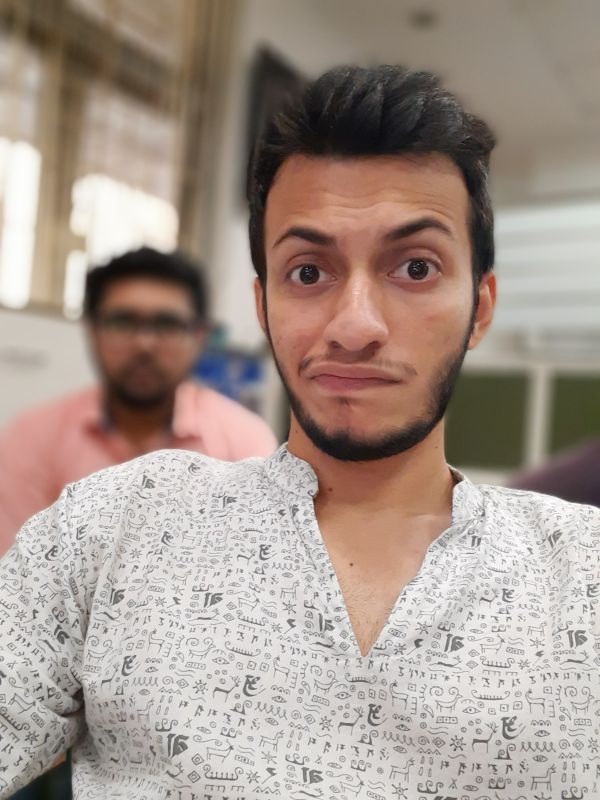 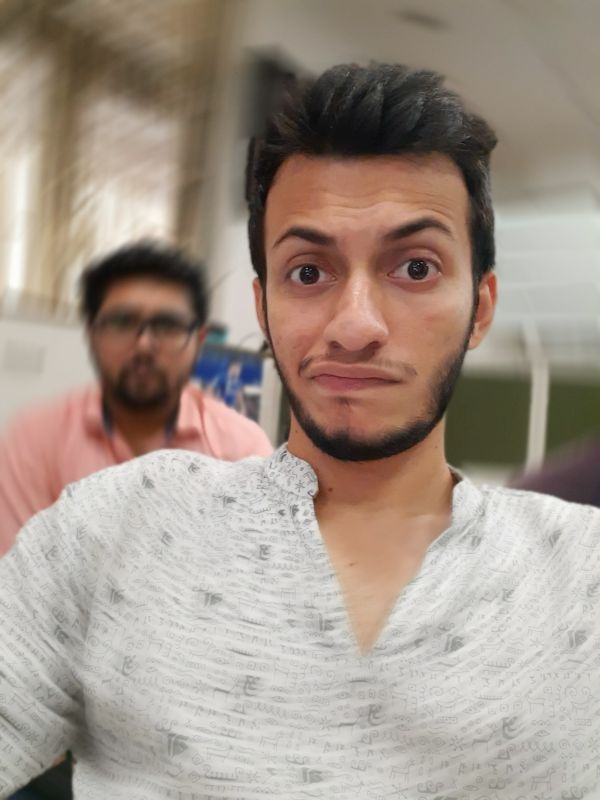 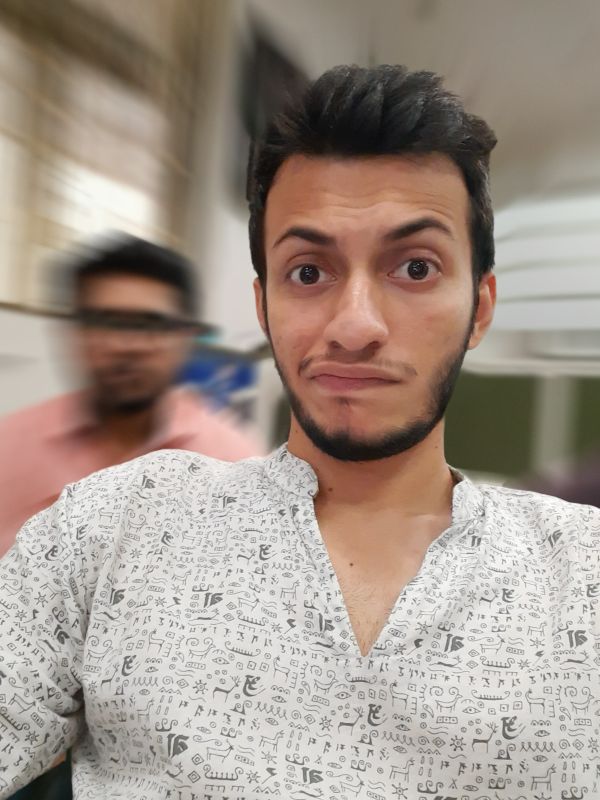 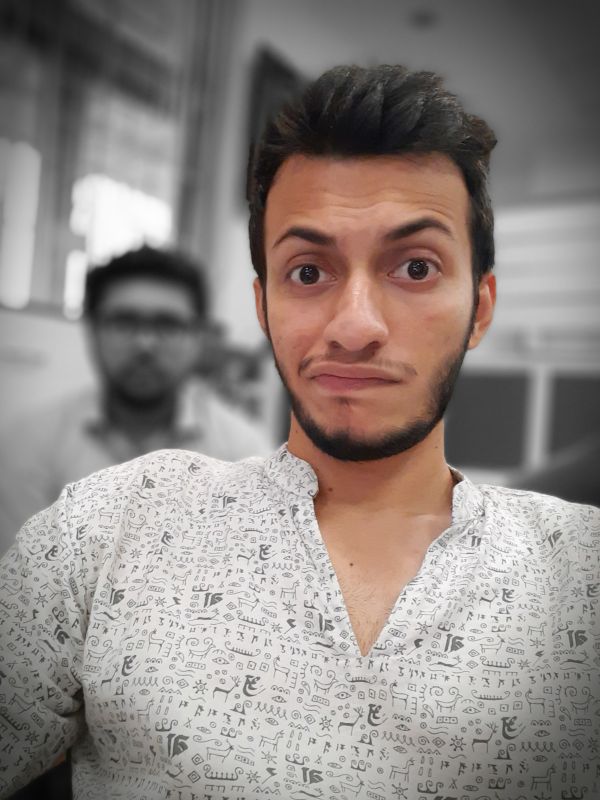 Samsung Galaxy A50s uses various modes that you can apply on Live Focus selfies after the shot to get creative effects.

You can take UHD videos on both the front and rear cameras, although there is no digital video stabilisation when shooting on max resolutions. There are modes to record slow motion, super-slow-motion and timelapse videos.

The Best Shot mode helps you intelligently align the frame to get better shots.

The camera app is very easy to use and though it may seem overwhelming to first-time users, it is easy to get used to. The extra options and features are all neatly organised in menus. Features like scene detection and Best Shot help you take better photos easily.

The Samsung A50s is good in pretty much every aspect except the performance of the phone, which isn’t bad, but average. The phone is powered by Samsung’s 10nm Exynos 9611 which is an upgrade over the Exynos 9610 that powered the A50 and clocks at 2.3GHz. The variant we have is powered by 6GB RAM and has 128GB storage. The device handles multitasking well and can run over 10 apps at the same time without restarts. 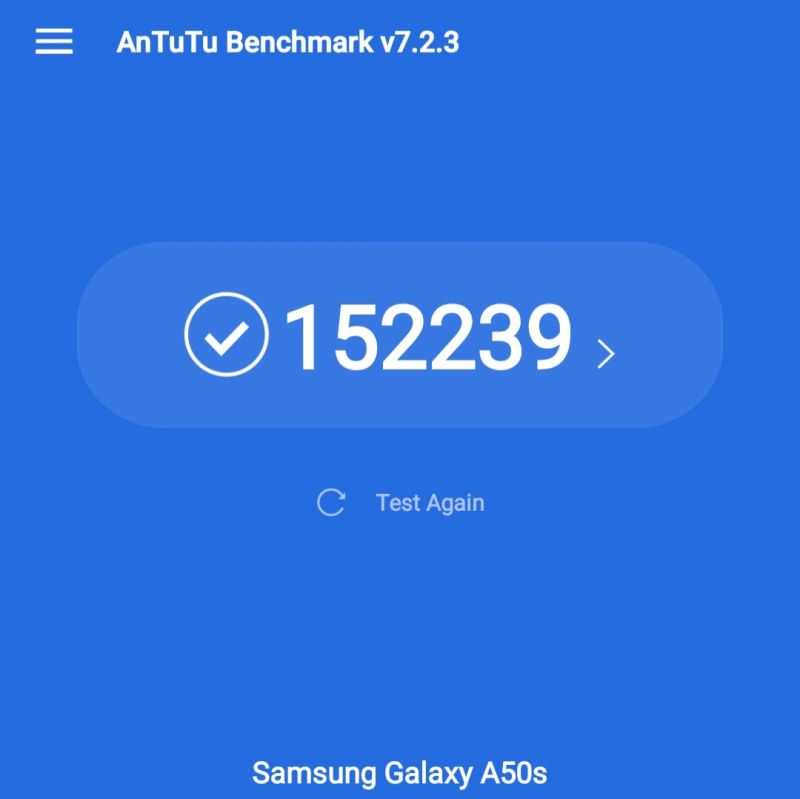 When there are too many notifications flying in at once, or when you have large apps and games running together, the phone begins to show slight signs of struggle. The Antutu Benchmark for the phone comes to 1,52,239, which while a lot more than that of the A50, actually often leaves us wanting more. For the bulk of our testing period, however, transitions were smooth and operations were quick.

We found gaming to be a mixed bag of experiences on the Samsung Galaxy A50s. While titles that didn’t require a lot of resources like Fruit Ninja ran fine, we did not have a very consistent experience with heavy games on the phone.

Samsung A50s also features a gaming mode to help get the best performance in resource-heavy games. 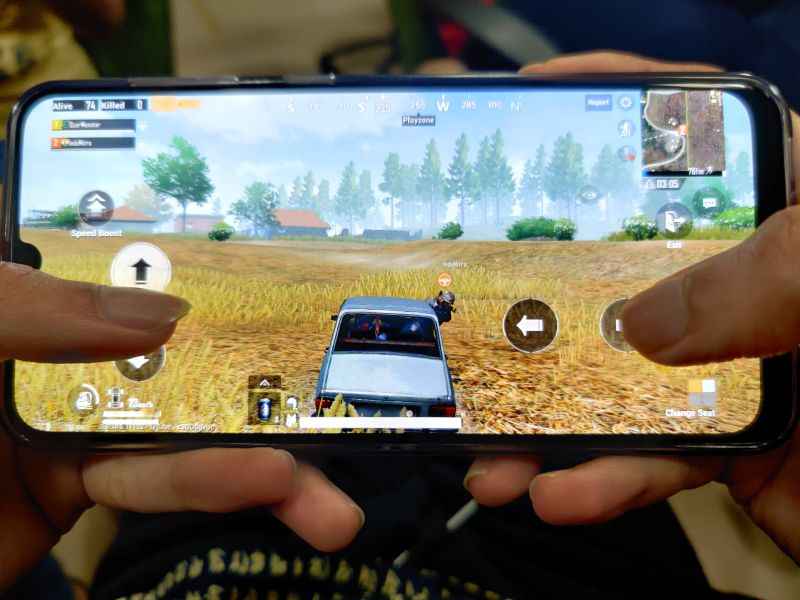 Testing PUBG, we found the game can run HDR graphics at Ultra frame-rate. While that sounds nice, gameplay experience started out fine, but 10 minutes into the game, the phone started picking noticeable heat and the frame rate suffered. Toning down the graphics to HD provided a much better, stable experience. Note that you can also play at Extreme frame-rate, but only if you set the graphics to smooth.

Battery life on the Samsung Galaxy A50 is pretty good thanks to the 4000mAh battery. There is fast charging support, but only at 15W. Considering this is an upgrade over the A50, we would have liked a faster version of fast charging at maybe 18W, but 15W is not bad either. A full charge lasts well over a day easily with moderate use.

The Galaxy A50s is a good smartphone. A decent combination of specs and excellent camera performance amalgamated into a sleek yet modern looking body. The phone gets a thumbs up in pretty much everything, except the fingerprint sensor maybe.

But as an upgrade, the difference between the A50 and the A50s is negligible apart from the upgraded camera setup. Within the months that separate the launch of the A50 and the A50s, the tech world has jumped by miles and Samsung leaves us wishing the phone had also picked up newer versions of fast charging, fingerprint sensors and maybe a slightly more powerful GPU, which hasn’t been changed at all. We say this considering the top variant of the phone costs Rs 25,000, which is 2019, is no more mid-range, but budget flagship pricing.