The list of smartphones that will receive the OS includes the Nexus 6, Nexus 5X, Nexus 6P, Nexus 9, Nexus Player, Pixel C, General Mobile 4G (Android One), and other devices enrolled in the Android Beta Program.

Earlier this week, Google announced to roll out the seventh version of its Android operating system, named Nougat, to Nexus smartphones. However, a new report suggests that some phones from OnePlus, Xiaomi, Samsung, Sony and a few more will not receive the Android 7.0 Nougat update because of compatibility issues.

“Qualcomm will not release graphics drivers for 800/801 CPUs.So HTC One M8 and other devices based on this CPU won't get official Android 7.0,” wrote on its twitter handle. 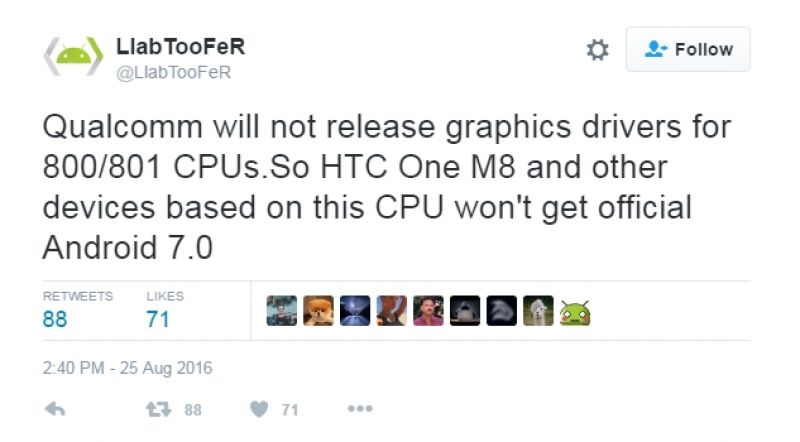 “Android 7.0 in AOSP has removed support for the MSM8974 chipset. The Snapdragon 800 SoC uses this chip along with the Adreno 330 GPU. This means phones (and tablets — hello, Nexus 7) using the Snapdragon 800 are not supported. But this doesn't explain why the Z3 was able to run the beta, and run it well. For that, Google Play compatibility comes into the picture,” reported Android Central.

Since both Nexus 5 and Nexus 7 are powered by the Snapdragon 800 SoC, they are not likely to support Nougat. Also, smartphones including HTC One M8, Sony Xperia Z3 and Z3 Compact, OnePlus One and OnePlus X, Xiaomi Mi4, Samsung Galaxy S5, Samsung Galaxy Note 3 and LG G3 will not be able to support the new Android version. Apart from these, there are many other smartphones which are based on Snapdragon 800/801 which will suffer similarly.

However, it is unsure if Google will make any changes later to enable support for these chipsets.