Google has confirmed with the owner that they are sending him a replacement, which will reach him in a week.

As though the Google Pixel 2 was not having troubles. The flagship iPhone rival from Google is already the news with regards to the bad display burnout issues and now Google’s new blunder has made the company ashamed. Well, though not deliberate, it was probably an accident. A Pixel 2 customer was accidentally shipped a new Pixel 2 smartphone that actually was a reject piece. The new flagship device had actually failed the quality check, but somehow passed through the internal departments and reached the customer.

The incident was reported by an ‘excited’ Pixel 2 owner on Reddit. He said, “My new Pixel 2 failed QC at the factory, but shipped anyway :( I was very excited to receive my new Pixel 2 (not-XL) this afternoon. I ordered the Quite Black 128GB unlocked model directly from the Google Store. I cut the tape seal, opened up the box, and was greeted with a blue slip of paper informing me the unit had "Cosmetic damage." Here's a picture I took of it. I'm working with Google support to sort it out, but it is still a little disappointing. Have any of you seen this before with Google orders?” 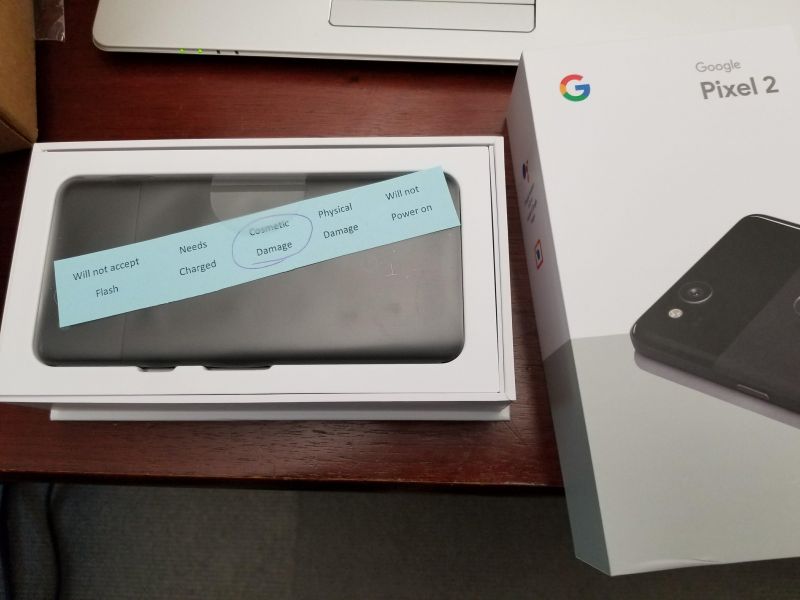 The Redditor, who goes by the nick name ‘dpezet’, had purchased a Quite Black 128GB version of the Google Pixel 2 a few days back and when it arrived in his courier, he was shocked after opening it. The device had a blue slip from the factory which had a circle drawn over ‘cosmetic damage,’ meaning it failed the quality control.

He took a photo of the opened box and posted it on Reddit. Google has reportedly contacted the owner and is sorting out the issue with him.

Nothing was reported by the Redditor as for what the problem with the design was. He further stated, “I couldn't see the damage, but I wasn't going to take any chances on an $800 phone. My replacement will be in on Tuesday so it'll all work out.”

The circle that marks the problem (cosmetic damage) does not actually mean that the product has a functional problem. The phone could probably have had minor scratches or a possible crack or dent and hence must have failed the quality inspection.

Though the issue will definitely be sorted out, it is an embarrassing moment for Google, and an extremely disappointing moment for a new, excited customer, and an even more disappointment for those who will be opting for one of these smartphones in future. In fact, the customer also reported that, “They gave me a $10 Google Play credit for my trouble.” Google has also confirmed with dpezet that they are sending him a replacement, which will reach him in a week.