The Galaxy Tab S6 does show that the tablet will come with a huge display and uniform bezels on all four sides.

For the last few years, the Apple iPad has dominated the tablet segment and smaller brands had failed to catch up. Then came the Galaxy Tab S5e, the only Android tablet out there that can challenge Apple’s dominance. Now, Samsung in a bid to not just take on the Apple iPad Pro, but absolutely crush it, will be launching a successor to the Tab S5e albeit with high-end specs. The Tab S6 will launch sometime in the near future and now we get our first look at it.

Over the last few weeks, the Samsung Galaxy Tab has been making sporadic appearances online and we recently saw prototype photos of the device. This is when we learned about some of the features it entailed. Evan Blass of @evleaks has now shared the Galaxy Tab S6 which appears to be a press render. Needless to say but Blass has a stellar reputation when it comes to leaking upcoming products so questioning his authenticity is not needed.

While we don’t get much in the way of specifications, the Galaxy Tab S6 does show that the tablet will come with a huge display and uniform bezels on all four sides. 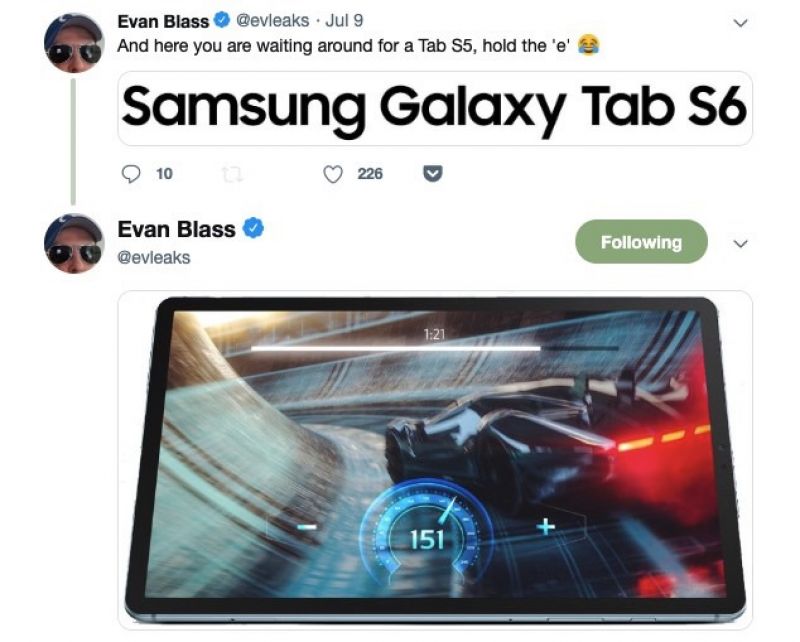 As per a related report by BGR, “The Galaxy Tab S6 does pack quite a few features that won’t be available on the iPad or competing Android tablets, including a dual-lens camera on the back, an S Pen stylus that attaches magnetically to the back, as well as an in-display fingerprint sensor. Of those, only the sensor isn’t definitively confirmed, because that’s not a detail that you can observe by looking at leaked photos. Then again, the only other biometrics alternative would be for the Tab S6 to feature 3D face recognition, which is probably not going to happen.”

Apart from the above-mentioned features, the Samsung Galaxy Tab S6 will come with a 10.5-inch OLED display that’s quite a rarity and now found on many devices available so far. Under the display, there will be a Snapdragon 855 chipset, 6GB of RAM and 128GB of storage. As of now, there is no word on when the Samsung Galaxy Tab S6 will launch but rumours point to an August 7 unveiling alongside the Galaxy Note 10.