The first thing you notice here is the gorgeous, tall 20:9 display on the Realme C3.
Rating:

Realme in 2020 is pulling off all the stops when it comes to every product they launch and with 2020 well underway, the first handset from the fastest-growing smartphone brand is nothing to scoff at. The Realme C3, the third-generation product from the brand’s C-series comes with eye-catching features such as a gorgeous display, humongous battery, the new ‘Sunrise’ design and the first smartphone in India to come with the MediaTek Helio G70 chipset. 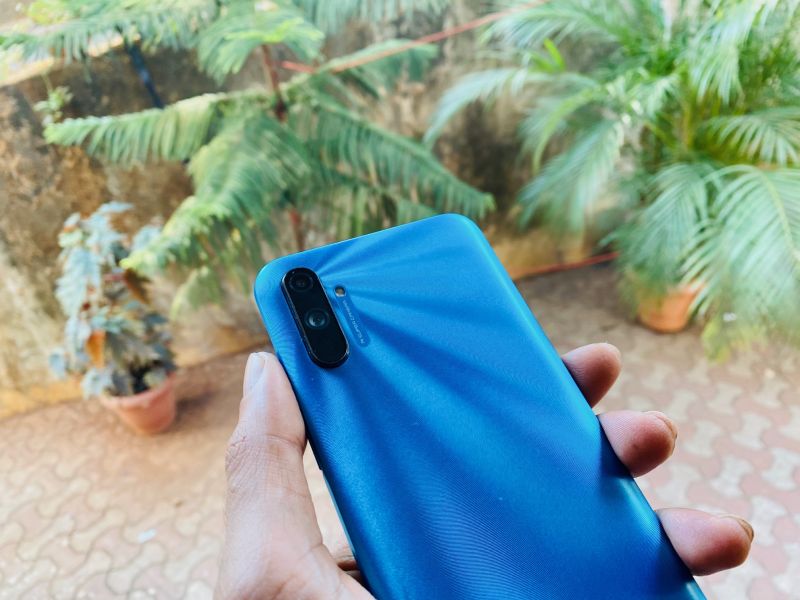 The Realme C3 features one of the most striking designs from the company which is dubbed as ‘Sunrise’ and was first introduced with the Realme 5i. Available in two colour options — Blazing Red and Frozen Blue, the Realme C3 eschew the norm that is predominant with Chinese smartphone manufacturers that opted for the glossy or ‘glasstic’ back finish. Instead, the design here boasts a matte texture that keeps smudges from fingerprints at bay.

A lot has gone into the design of the rear and when held against the light, it boasts a pattern that’s akin to a ray of light emitted by the sun. Although it is built out of plastic, the C3 does in no way feel cheap and this is because of the amount of heft used to make it appear premium. The rear also features a vertically-stacked dual-camera setup that’s pretty uncommon from a major smartphone brand. There is an LED flash as well with the ‘AI Super Camera’ branding while the bottom of the handset boasts the Realme logo. A notable absentee here is a fingerprint scanner and for biometric authentication, you are limited to just the front-facing camera that’s housed in the waterdrop notch. 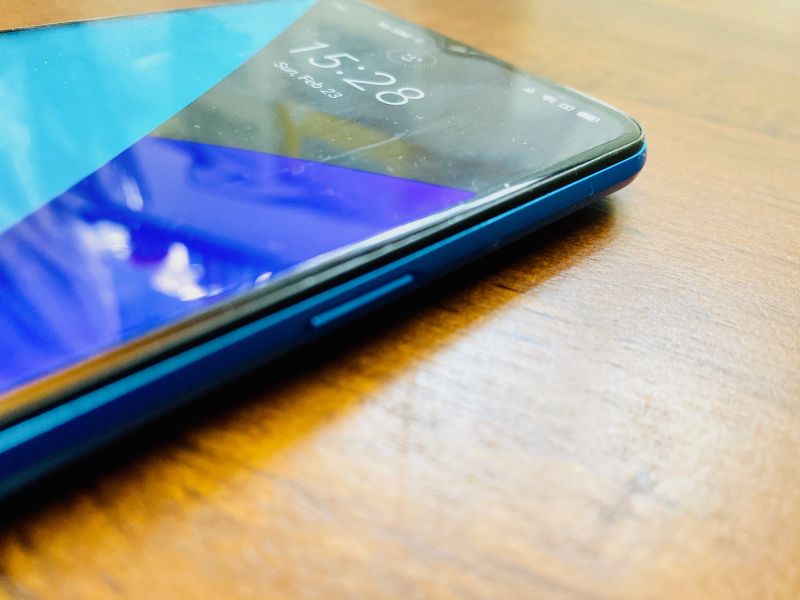 The right side of the handset features just the power button that’s well-placed for single-hand usage while the left features the volume rockers and SIM tray above it.

The bottom plays home to a micro-USB port and a 3.5mm audio connection. We would have preferred a USB-C port in place of the micro-USB port but we understand the design decision is to keep the cost down to a minimum. 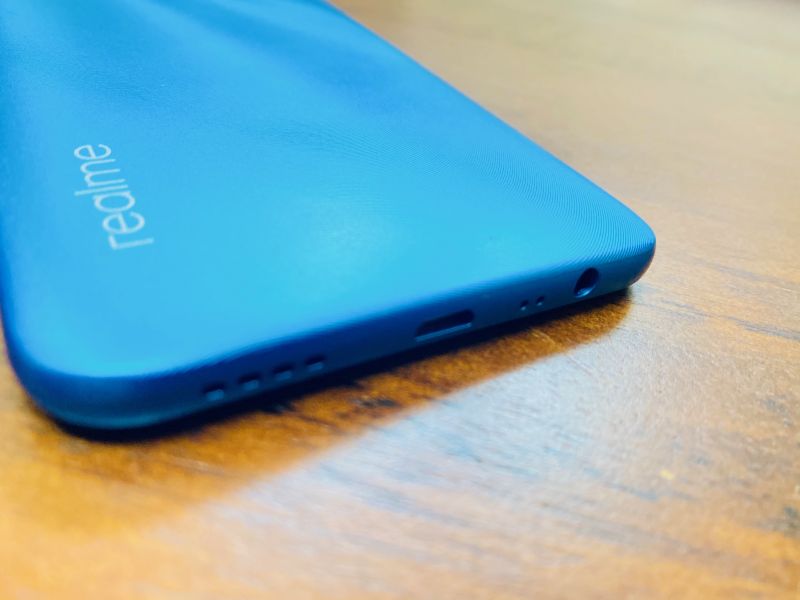 Overall, the unibody design of the Realme C3 is sure to catch the attention of anyone who sees it and we couldn’t have hoped for anything better. Also, the build quality here is pretty solid and can be used without a case — something which isn’t bundled with the packaging contents. However, due to the matte finish and the evenly distributed weight, the Realme C3 provides a grip that’s not just secure but also premium. 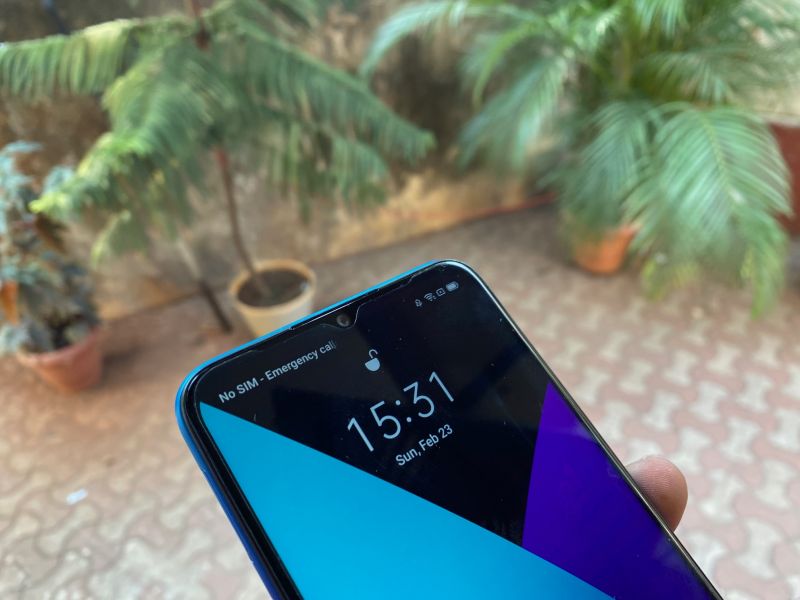 The first thing you notice here is the gorgeous, tall 20:9 display on the Realme C3. It features a 6.53-inch HD+ waterdrop notched screen that sports a resolution of 720 x 1600 pixels and a screen-to-body ratio of 89%. Even though this is a budget handset, Realme has ensured that it is protected by a Corning Gorilla Glass 3 screen alongside a 2.5D curved finish which makes it easier to grip.

As far as the quality of the display is concerned, you get an output that’s similar to some of Realme’s higher-priced handsets with vibrancy and detail that is rarely found at this price point. Apart from the out-of-the-box colour, you can tweak the display to your liking as well as it features three useful options — Cool, Default and Warm. Under direct sunlight, the Realme C3 performs well and this raised no problems for us especially since budget smartphones tend to perform badly due to their low brightness levels. 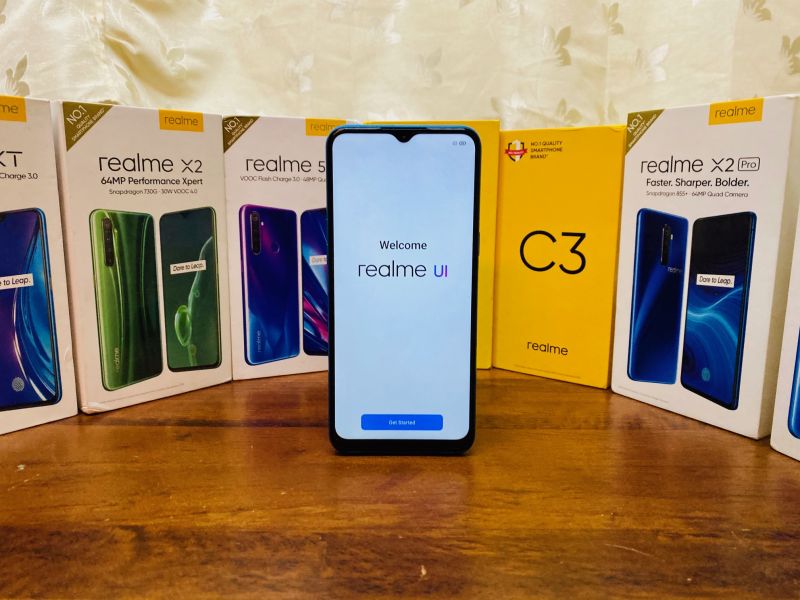 Even though the Realme C3 is a budget model, it is the first from the brand to come preloaded with Realme’s Realme UI. It features the Realme UI v1.0 and updated with the December Security patch from Google. This UI is based on OPPO’s recently unveiled ColorOS 7 which is a skin on top of Google’s latest Android 10.

There are a host of similarities between the Realme UI and ColorOS 7 and the slickness can be felt throughout. With this new UI, you get important features such as the new system-wide Dark Mode, customisable app icons, the new streamlined sidebar, new animations, and more.

While the software and interface are smooth the handset also comes with some region-specific bloatware such as apps that thankfully can be uninstalled such as Gaana, DailyHunt, Helo, and others. 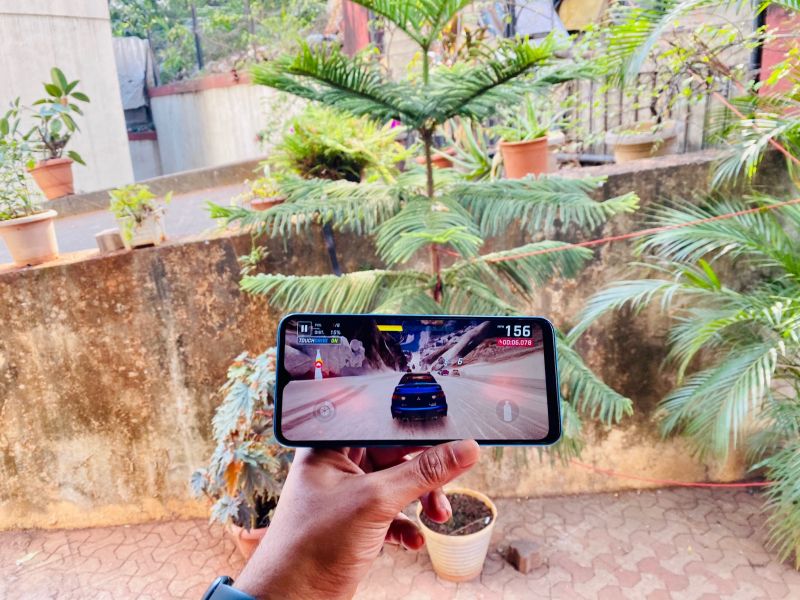 The Realme C3 boasts the country’s first MediaTek Helio G70 chipset and this is no small feat as it shows the brand’s strong intention for its budget performers. The G70 SoC is an octa-core chipset comprising of two high-end Cortex A75 cores clocked at 2GHz along with six Cortex A55 cores clocked at 1.77GHz. This chipset is paired with either 3GB or 4GB LPDDR4X RAM with 32GB/64GB storage.

In day-to-day usage, the Realme C3 managed to surprise us as it performed a lot better than most of the other smartphones at this price range. Even when multiple apps were opened, the load time was pretty quick and the navigation between them was buttery smooth.

When it comes to casual gaming, the Realme C3 was more than a match and everything rendered as expected. However, what really astonished us was the performance of premium games such as PUBG Mobile, Asphalt 9 and others. The settings could be cranked up and it still managed to perform admirably well for a handset priced this competitively. As far as thermals go, the handset got a bit heated but nothing to raise any alarms about.

While running the Geekbench 5 tool, the Realme C3 scored 339 points in the single-core test and 1251 points in the multi-core test. In the popular AnTuTu benchmark, the handset scored 191180 points and defeated 22 per cent of users.

Since there isn’t a fingerprint scanner, we had to rely on the facial unlock and the performance is pretty solid with it recognizing the face 100 per cent of the time. 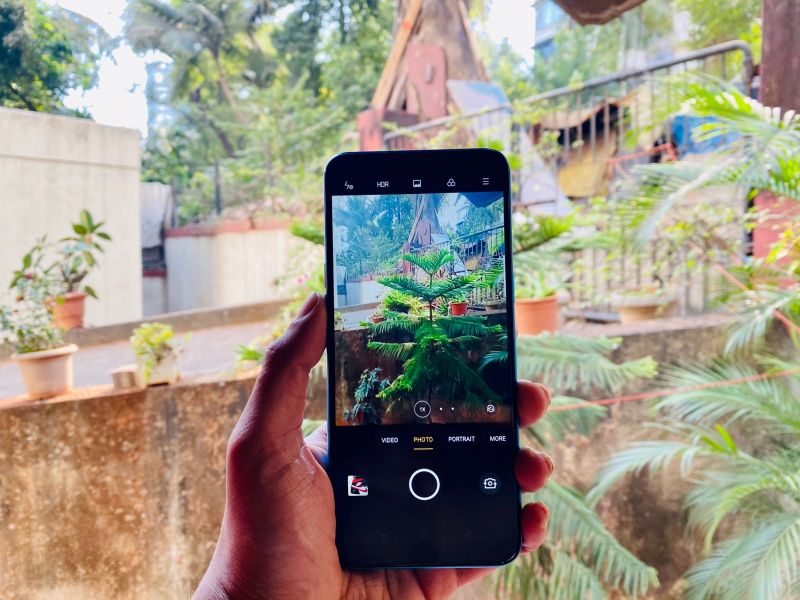 The Realme C3 comes equipped with a dual-camera setup on the rear which consists of a 12MP main sensor and a 2MP secondary sensor. The camera app comes loaded with a range of shooting modes such as Slo-mo, Portrait, and others. 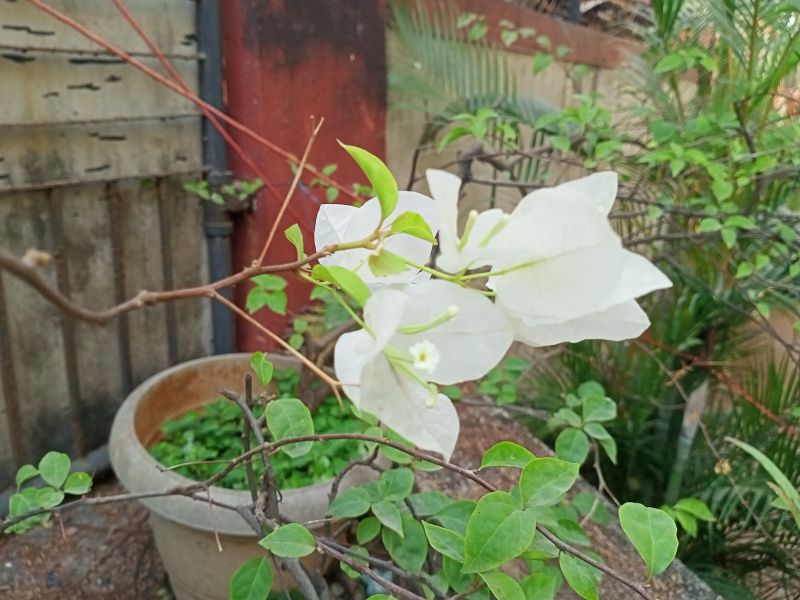 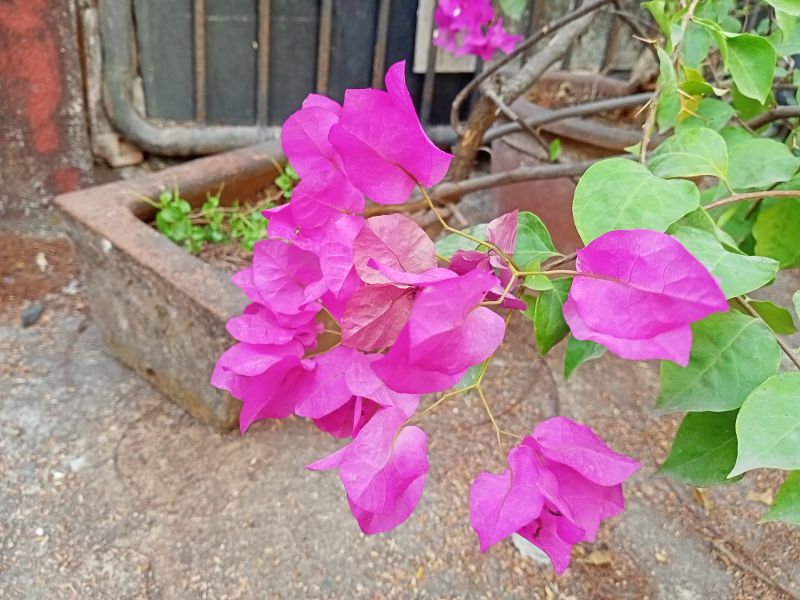 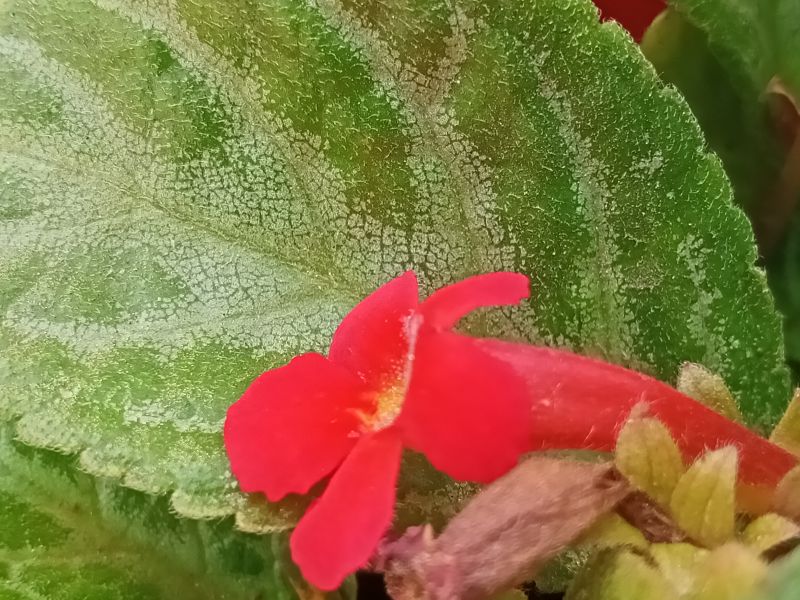 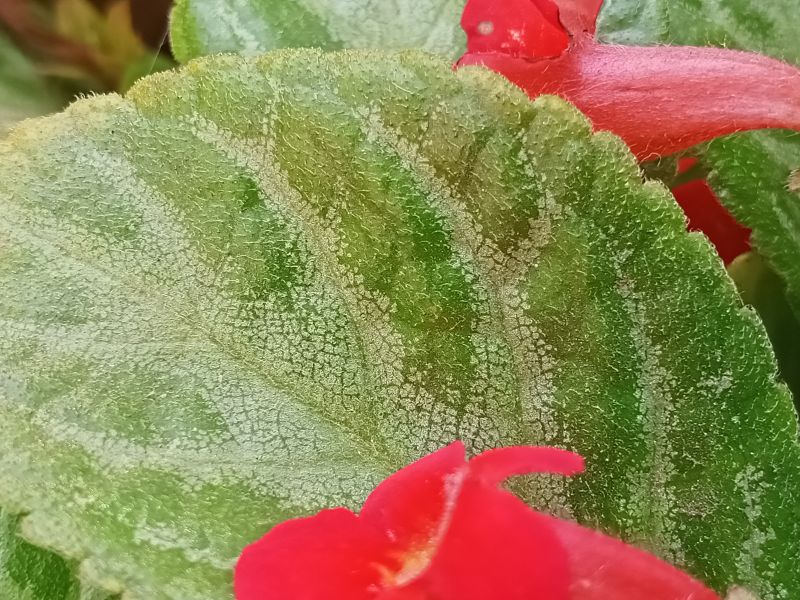 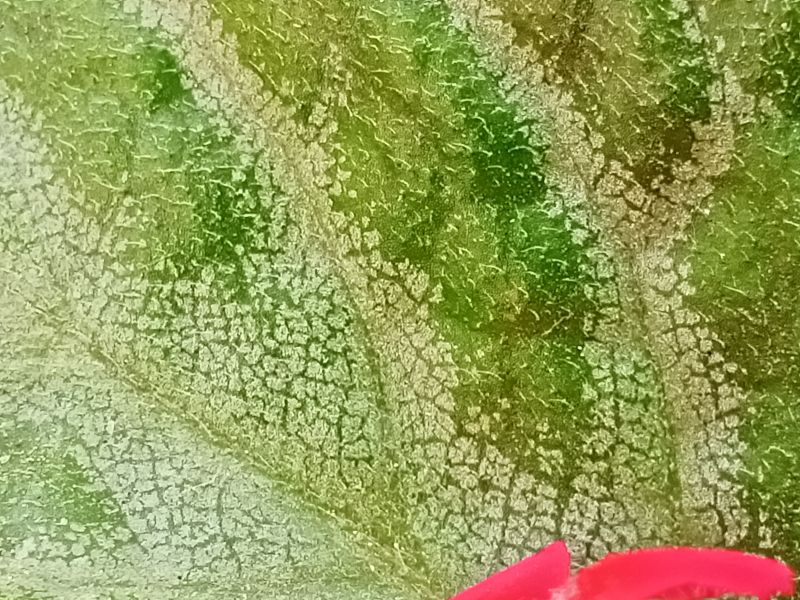 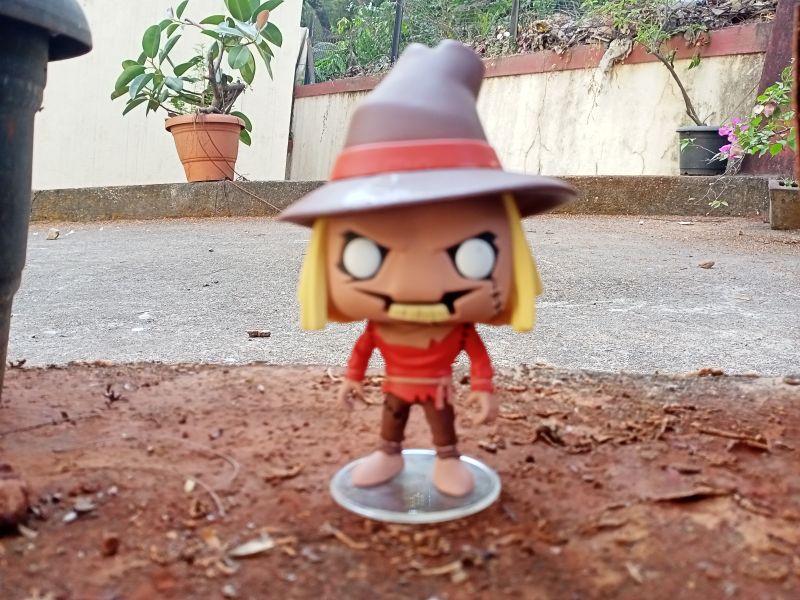 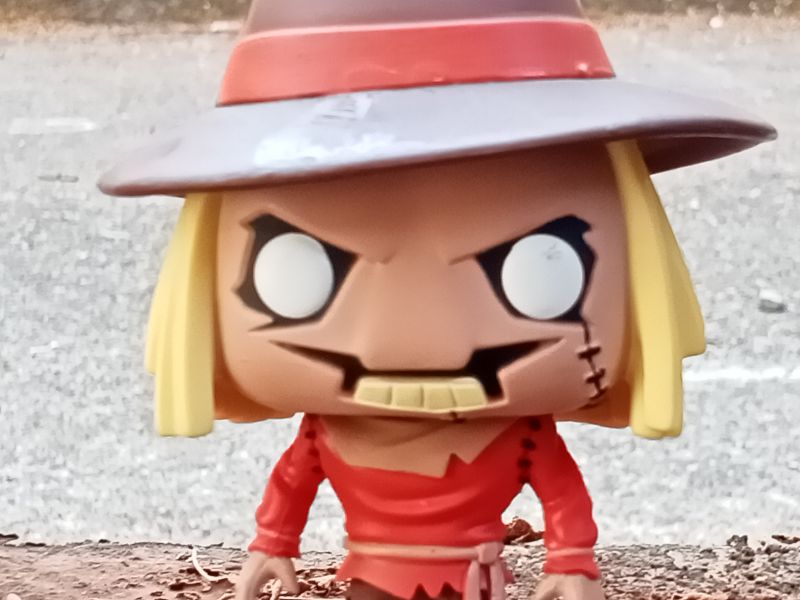 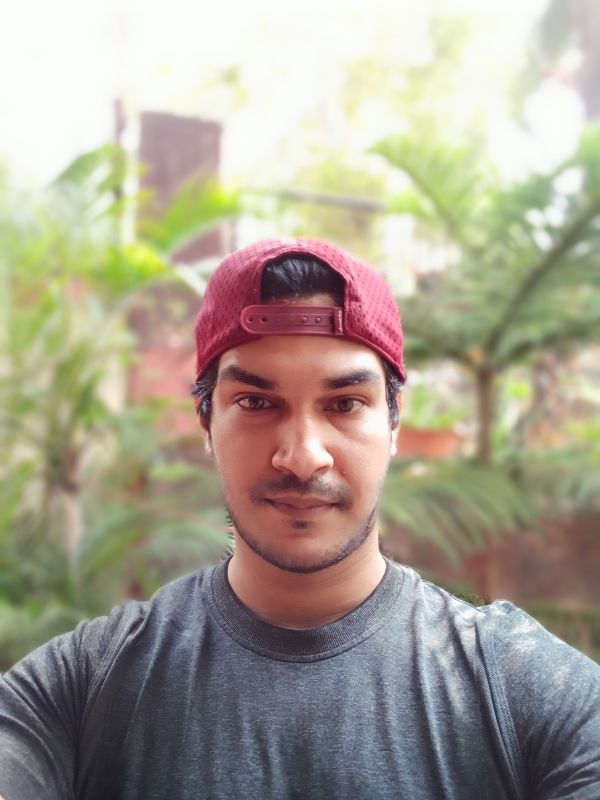 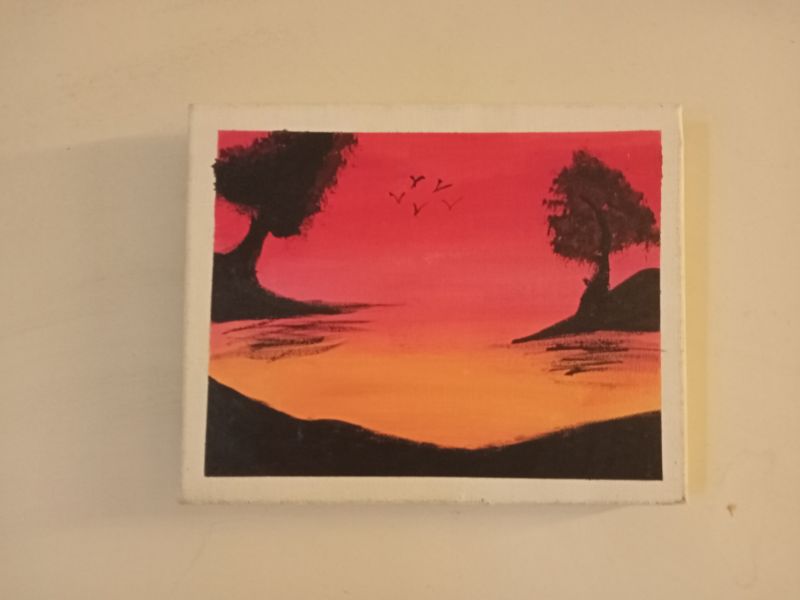 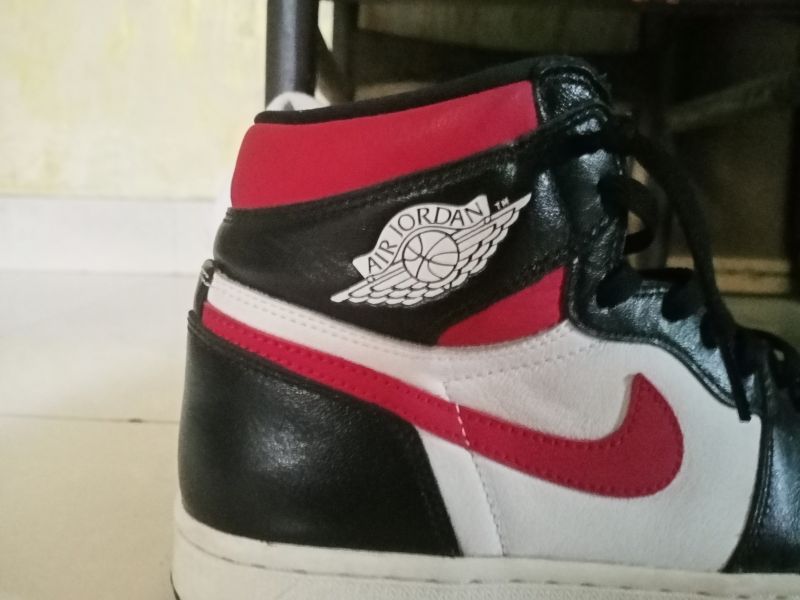 The performance of rear cameras in well-lit conditions is pretty great considering it is a budget model. There was a lot of clarity and sharpness noticed and no real complaints from us here. Surprisingly you also get the ability of 2x and 4x zoom and even though on paper this is a great addition, you would need a mobile tripod to get the best possible results. Portrait shots worked as expected and there was a decent amount of background blur with the edge-detection working as well as you can expect from a budget handset. 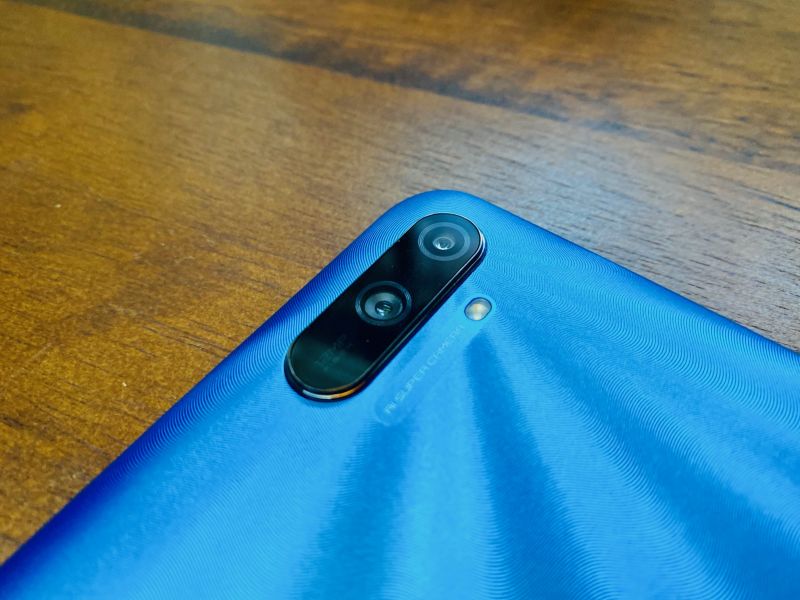 While the cameras on the rear work well in bright conditions, it really tends to struggle in low-light environments. There is a lack of detail and image noise is present throughout. With that being said, this is a budget model and we couldn’t really expect much more from it.

Upfront, the Realme C3 comes with a 5MP selfie camera and the overall image quality is acceptable even though there is a fair amount of noise and lack in detail. These can be used for social media but we recommend shooting in well-lit conditions for the best possible results. 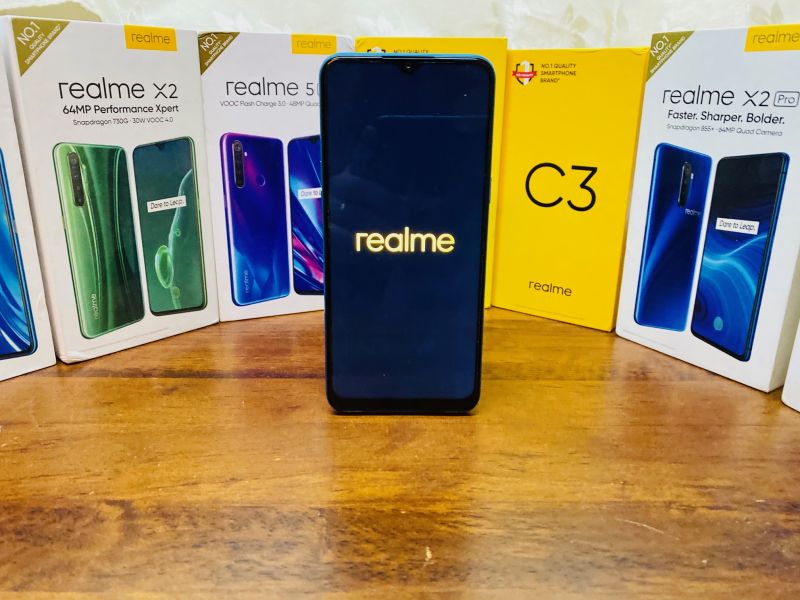 The battery on the Realme C3 is the handset’s strong suit and the brand has thrown in a whopping 5000mAh battery. During our testing period, it could go easily for a couple of days before it needed to be tethered to a charger. Additionally, the bundled 10W charger helps a bit to top the battery up rather quickly which is beneficial for most of you out there. 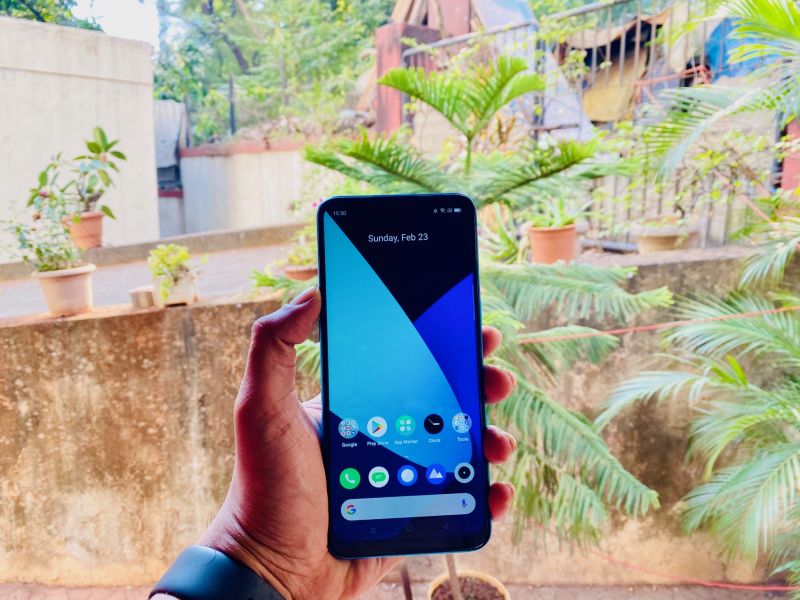 The Realme C3 is priced at a mere Rs 6,999 for the 3GB/32GB option and just Rs 1,000 more at Rs 7,999 for the 4GB/64GB option. In a segment where smartphone manufacturers are still struggling to offer the best possible specs at a great price, Realme has done the impossible and launched a flagship-grade budget smartphone that absolutely defies the odds. If you’re looking for a not just good, but a great smartphone that’s extremely competitively priced, then the Realme C3 checks all the right boxes and then some.