The only reason we recommend the Nova 3i is for the ultra-glamorous aesthetics and a decent quad-camera setup on a budget.
Rating:

When Huawei announced the P20 Lite earlier this year, smartphone enthusiasts went berserk. It brought a flagship-class glass-metal build to a segment that’s usually accustomed to metal builds. However, unlike the P20 Pro, the Lite never saw a colour shifting variant and was based on Huawei’s older Kirin 659 midrange chipset. Get to mid-2018 and Huawei seems to have fixed the issues with their latest midrange offering — only that it now belongs to the Nova series instead of their flagship P series.

Dubbed as an affordable alternative to the more expensive Nova 3, the Nova 3i brings the thrills of its premium sibling while imposing Huawei’s presence in the highly competitive midrange category. To achieve the Rs 20,990 mark, Huawei has compromised in certain areas — a pair of toned-down quad-cameras, a micro USB port, a flat-rear panel and a midrange Kirin 710 chipset. However, it retains the Iris Purple hue from the Nova 3, along with a notched-display and the latest version of Android on offer. All that sounds good for the price, but how does it fare against its rivals from big brands and its recently unveiled cousin — the Honor Play? Let’s peep in.

The premium Nova 3 comes across as one of the most stylish and affordable flagship phones one can buy, especially the Iris Purple variant. With the Nova 3i, there’s virtually no difference. In fact, place both beside each other and won't be able to tell them apart. The Nova 3i has the same vertically-mounted dual rear camera, a centrally located fingerprint sensor and Huawei’s trademark vertically aligned branding. 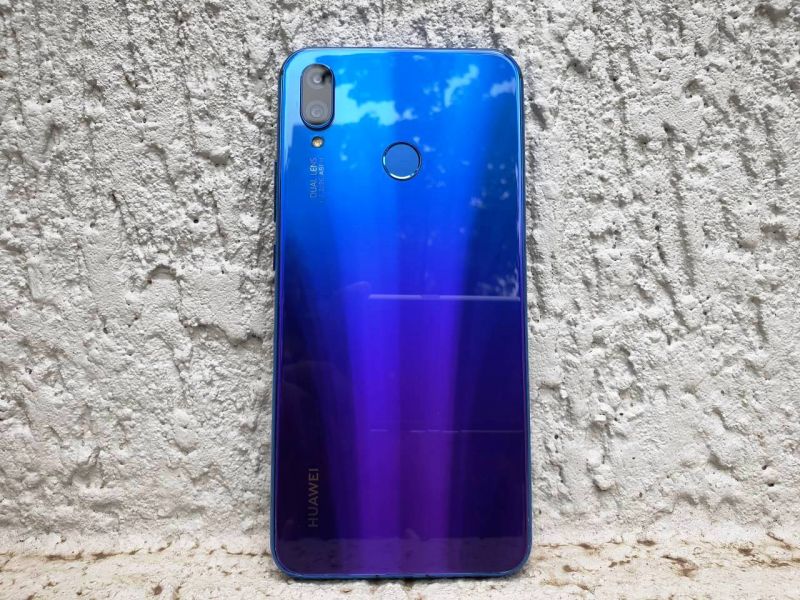 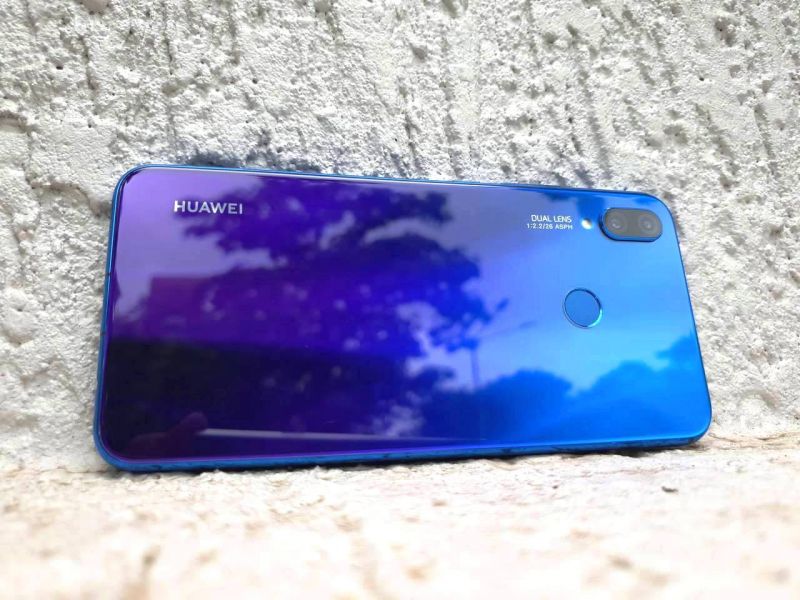 Even the Iris Purple hue is identical, except for the finish on the frame, which is closer to blue than the one on the Nova 3. However, instead of a 3D glass panel, the Nova 3i simply has a 2.5D glass. The glass panel is also a fingerprint magnet and is highly vulnerable to scratches. That said, it still looks hot and is comfortable to hold for longer sessions of usage at the same time. 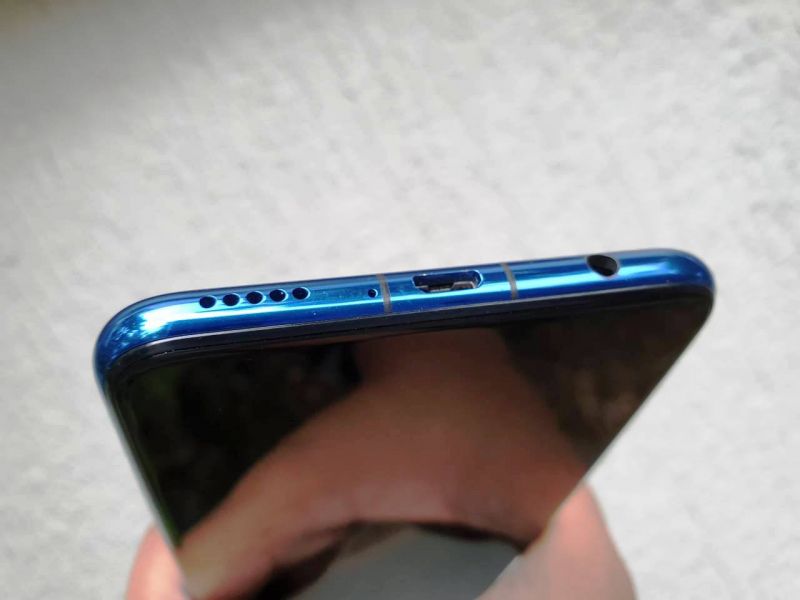 If you look around, you will find a 3.5mm headphone jack and a loudspeaker at the bottom. Sadly, they are sitting around a micro USB port, which is an undesirable downgrade from the Nova 3’s USB-C port, but does not matter as much. Huawei could have gone ahead and offered USB-C on the Nova 3, considering certain cheaper phones have started offering USB-C as standard these days. 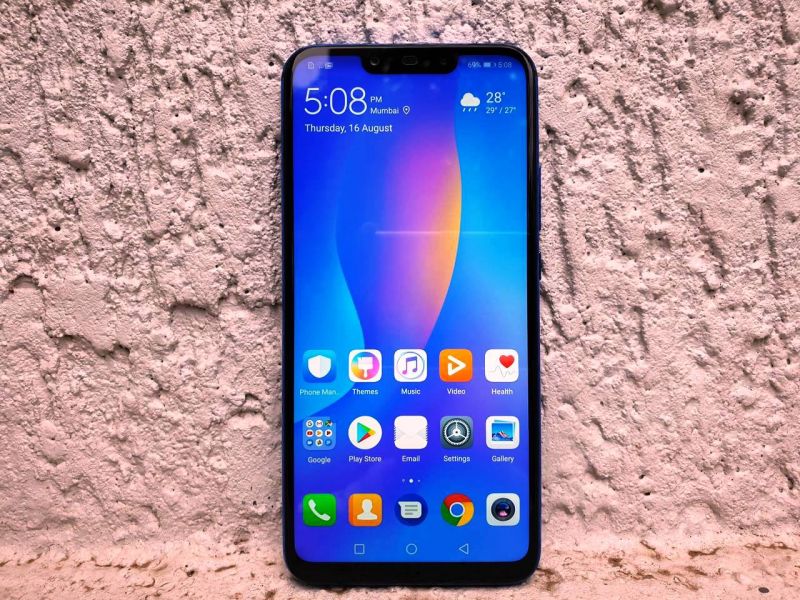 Thankfully, there’s no major compromise for the front — the 6.3-inch display with a notch on top is retained, with the chin slightly thicker than that of the Nova 3. There’s no IR sensor for the facial recognition system — the Nova 3i relies on its front cameras to unlock the phone.

Overall, the Nova 3i is a beautiful phone that certainly commands attention.

The Nova 3i sports the same 6.3-inch full HD+ LCD display as the Nova 3, albeit with a slightly thicker chin. As is the case with all phones from Huawei’s stables, the display exhibits a wide dynamic range with good contrasts and impressive levels of brightness. Sunlight legibility is decent while viewing angles are fairly wide. 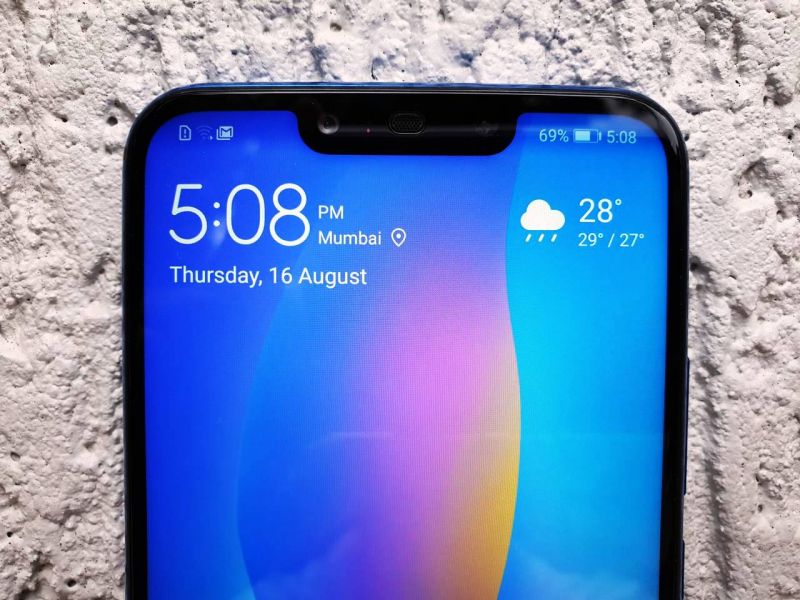 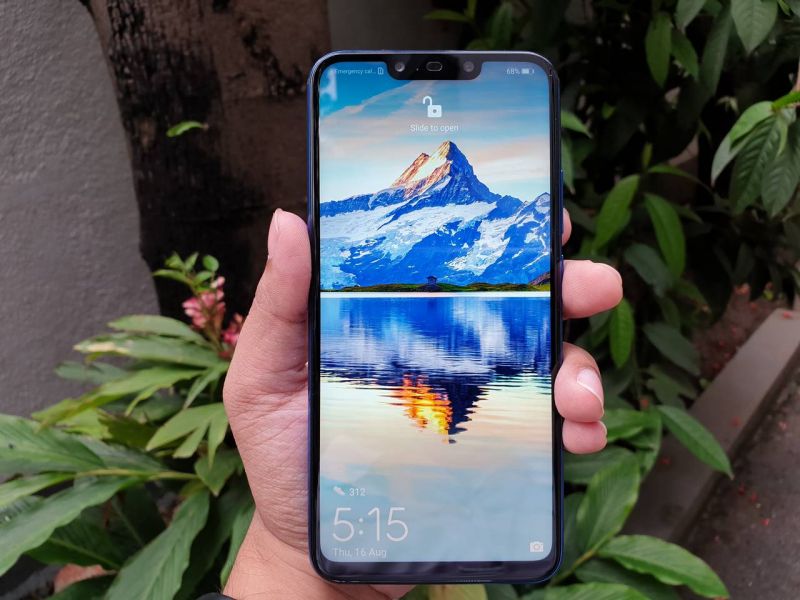 Users can tweak the colour tones as well as other parameters from the Settings. The notch is big but leaves enough space on either side to accommodate the notification bar elements. If you don’t approve of the notch, you can hide it from the Settings.

For a phone in the midrange category, the Nova 3i sports one of the best displays and will certainly be a hoot to consume content.

By now, you must have assumed that the Nova 3i is essentially an out-and-out downgraded version of the Nova 3, with nothing attractive apart from the aesthetics. You are wrong.

Instead of using the ageing Kirin 970 chipset, Huawei debuts their brand-new Kirin 710 in India with the Nova 3i. It comes across as the successor to the midrange Kirin 659, packing in more muscle and immensely higher grunt than the old chip. Built on the 12nm fabrication process, it consists of an octa-core processor with four Cortex-A73 cores at 2.2GHz and four Cortex-A53 cores at 1.7GHz. Unlike the Kirin 970, it lacks a dedicated NPU, but gains support for scene recognition and Face Unlock. There’s a Mali-G51 GPU handling the graphical processing duties. 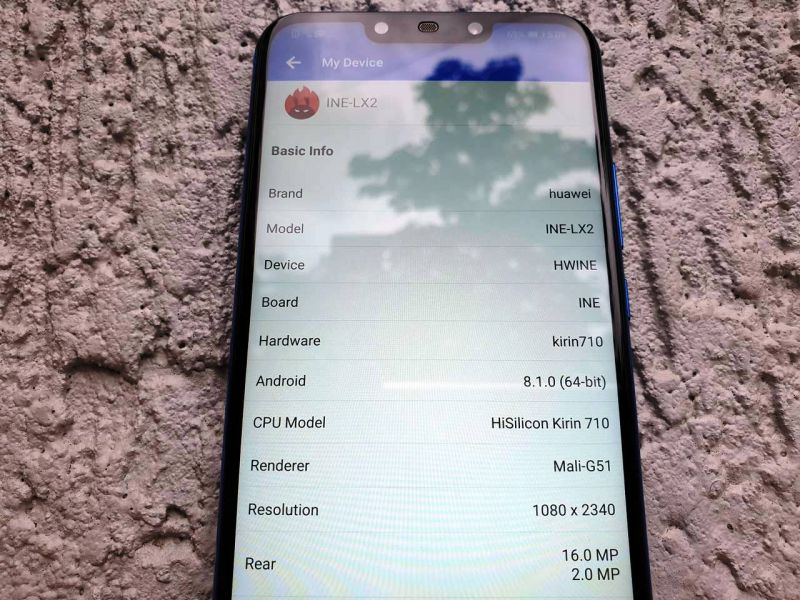 The Kirin 659 used in the P20 Lite was capable of handling daily tasks with ease, but struggled when it came to playing heavy gaming titles and multitasking loads. The Nova 3i’s Kirin 710 is certainly a huge step up from the Kirin 659 and it shows. While handling daily tasks such as multitasking with multiple social media apps, messenger apps and a browser with a couple of tabs is no big deal for the chipset, heavy games are also dealt decently. 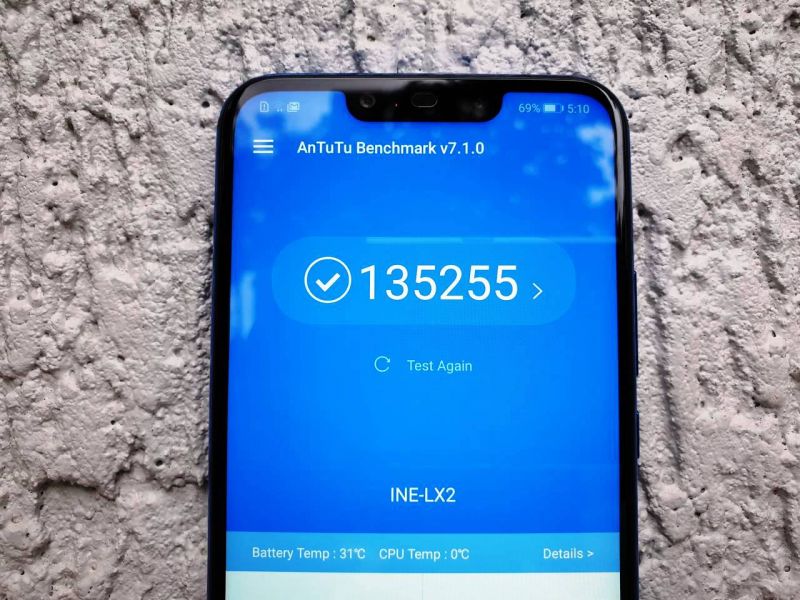 We put the Kirin 710 through its paces on Antutu and it put up an impressive score of 135,255, which is a tad above the scores obtained by Qualcomm's Snapdragon 660 SoC and much ahead of the Kirin 659's scores. Similar to the latest crop of Huawei/Honor devices, the Nova 3i gets the GPU Turbo feature, which promises improvements up to 60 per cent in performance while consuming up to 30 per cent lesser battery. Since the Mali-G51 GPU isn’t as capable as the Mali-G72 on the Kirin 970, resource-intensive games can be played with smoother frame rates in lower graphics settings. We tried at our hands at PUBG Mobile and Asphalt 9: Legends, and the Nova 3i managed to deliver a satisfactory experience as long as we kept the slider in the graphics settings to the minimum. From what it seems, the Kirin 710 is clearly not a chipset meant for gaming and is, therefore, comfortable with everyday smartphone tasks. 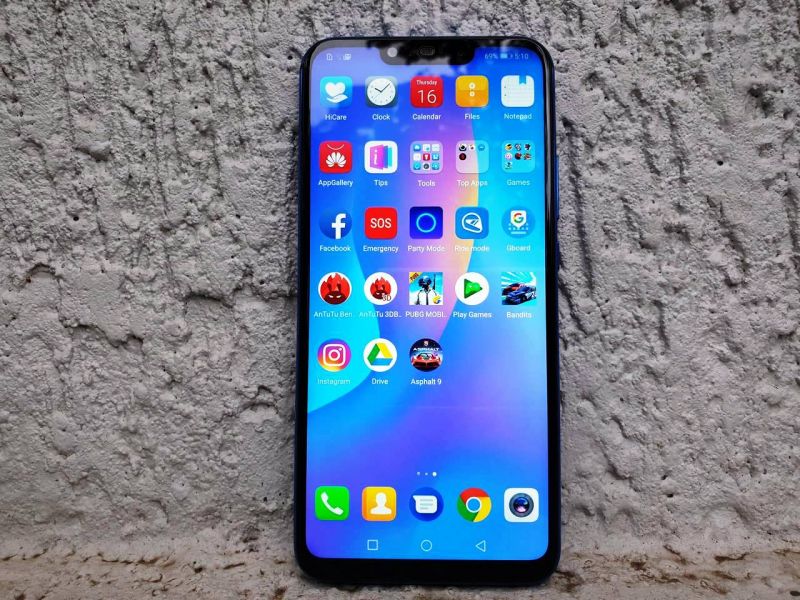 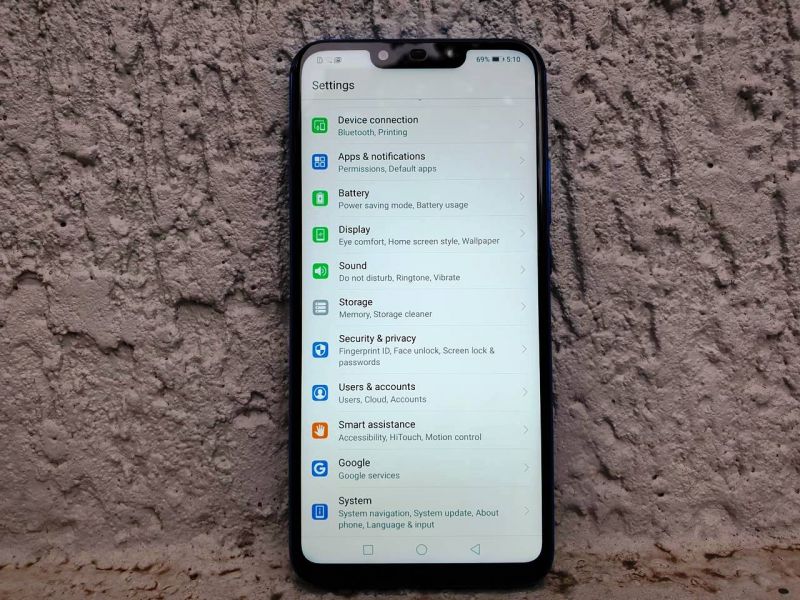 While the hardware is impressive for a phone of its category, the software is where it gets polarising. Huawei’s EMUI 8.2 returns with Android 8.1 Oreo forming its base. EMUI is one of the best-optimised custom operating systems we have seen in a while. It ensures fast performance with fluid animations and impressive memory management, despite the amount of bloat that Huawei preloads. In fact, there’s tons of bloatware, some of which can be uninstalled. 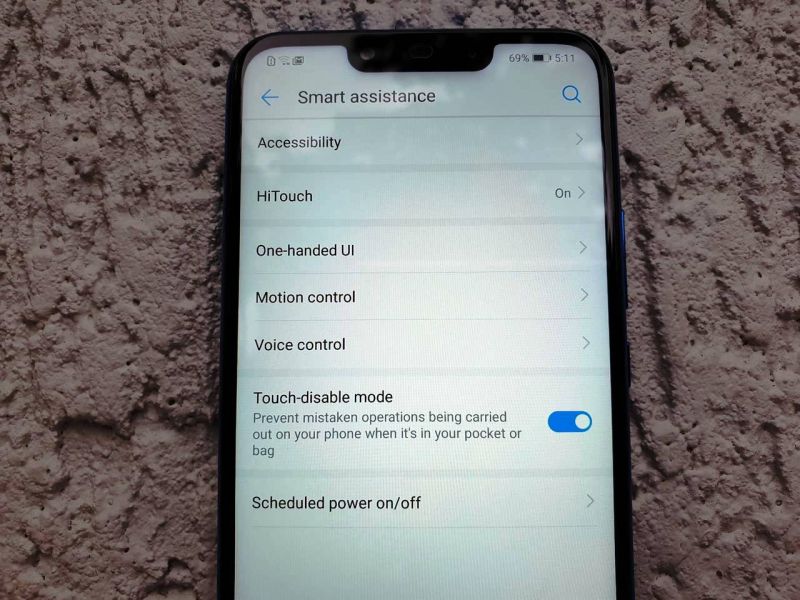 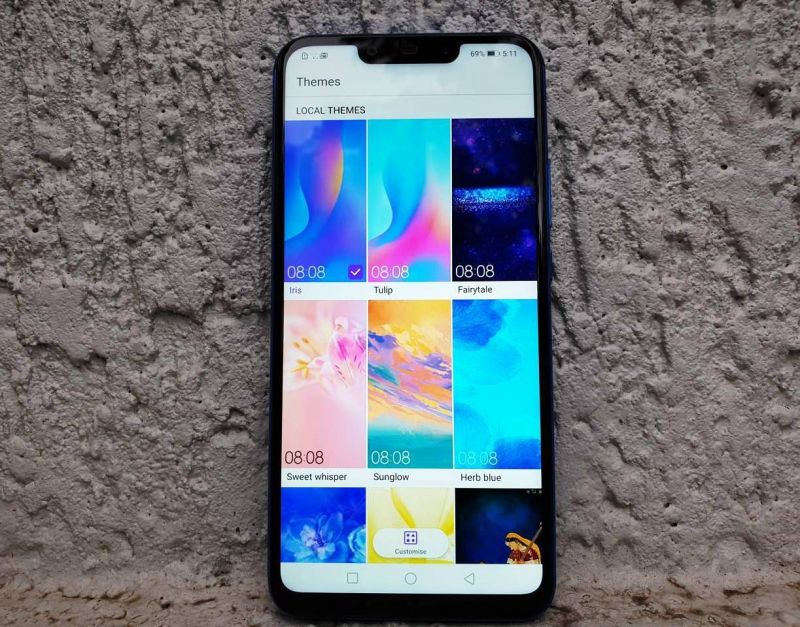 The disproportionate UI also comes across as ostentatious to stock Android lovers. However, EMUI is made up of smart AI-based features and in its current EMUI 8.1 iteration, consists of certain features that make it easier to live with on a daily basis. EMUI also offers lots of options for customisation freaks with a dedicated theme store, hosting custom wallpapers, themes, fonts and much more. Therefore, while EMUI is not the most pleasant looking custom OSes, it is certainly well optimised and enriched with features that make it difficult to move to another ecosystem.

With the P20 Pro, Huawei showed its prowess in the photography department. The Nova 3 also feature capable optics for what its worth. With the 3i, the focus is purely on shedding unnecessary stuff to keep a lower price. Therefore, for the rear, there’s a 16MP + 2 MP dual setup with f/2.2 aperture. The secondary sensor is in charge of gauging the depth for portrait mode photos. 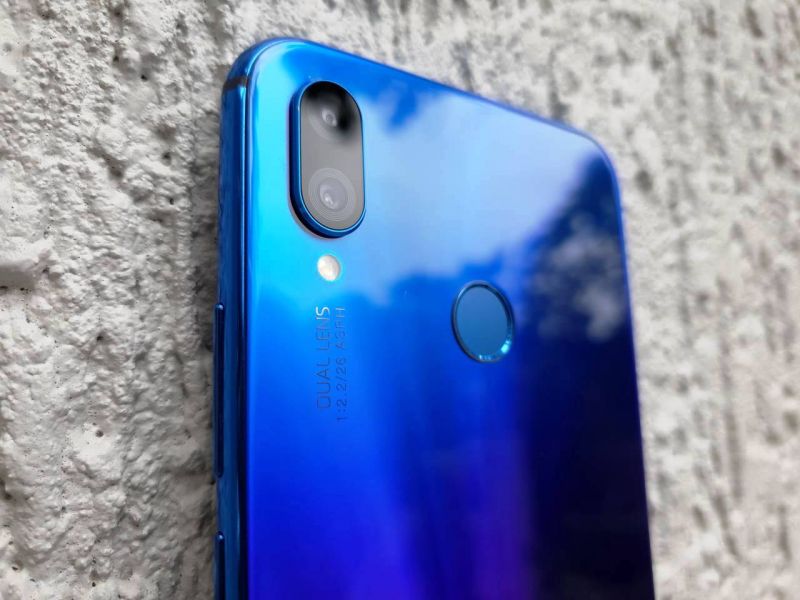 However, don’t be disappointed with the specifications as the Nova 3i can perform well in favourable scenarios —courtesy the AI mode. The AI can detect up to 22 types of scenes and tweak the parameters accordingly to fetch a colour-rich image with the adequate amount of details, albeit with overexposed patches. The AI mode also ensures more lighting in low-light situations by tweaking the ISO and the shutter speed accordingly to snap photos worthy of your social media timeline — do note that a noticeable amount of noise creeps up in extremely dark conditions. Without the AI, the rear shooter churns out average looking photos with just enough details and colours. The portrait mode also does a decent job with bokeh effects and several 3D studio lighting effects. 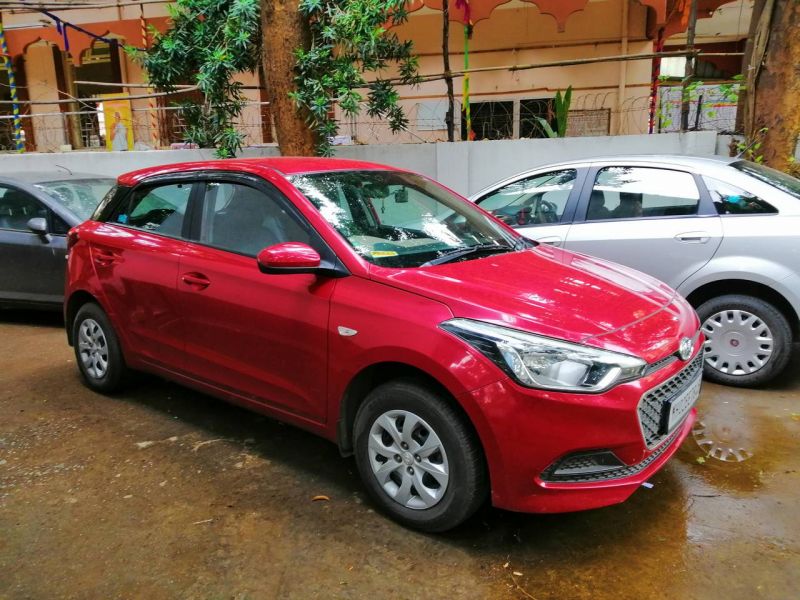 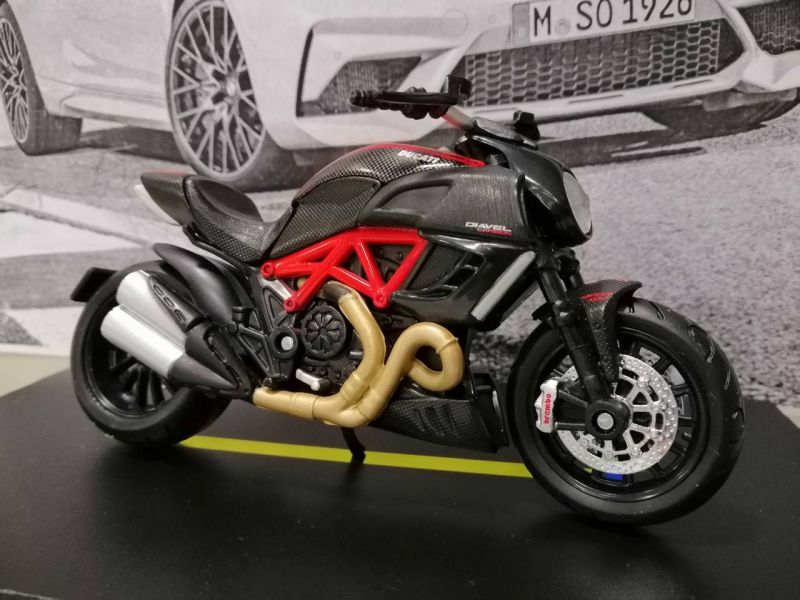 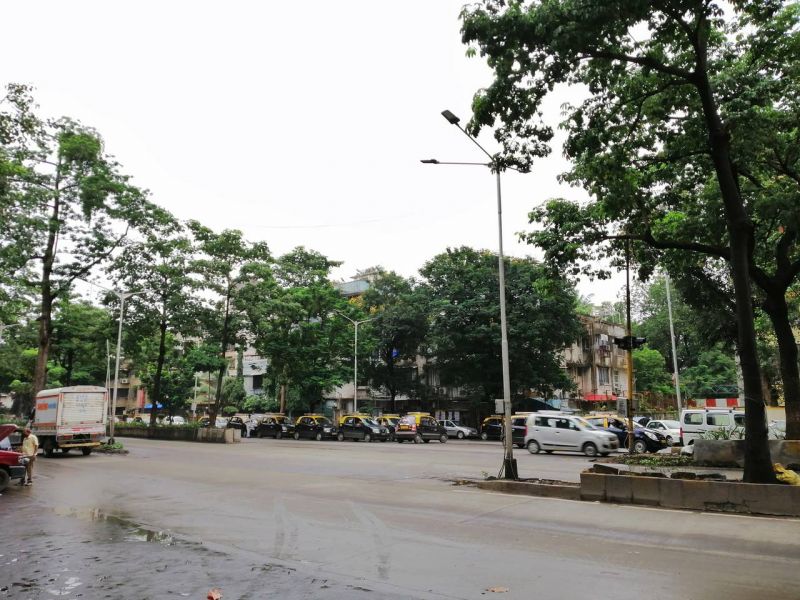 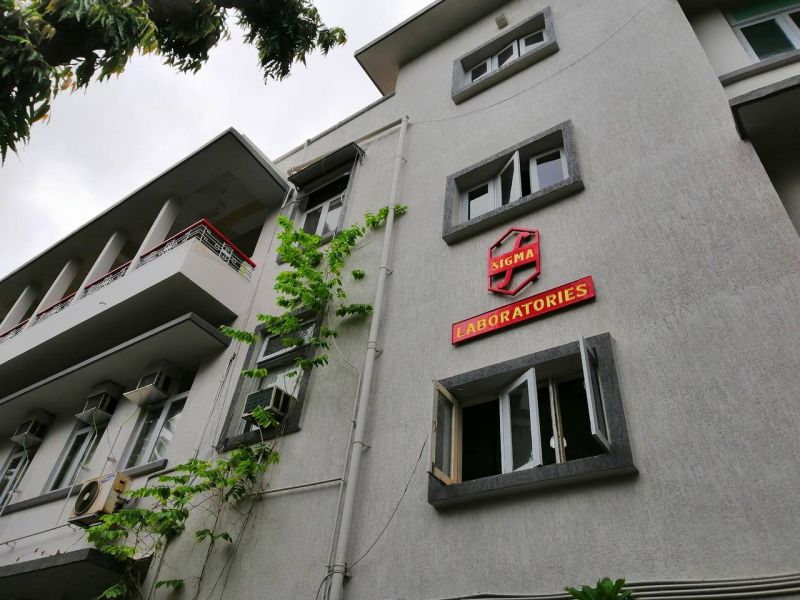 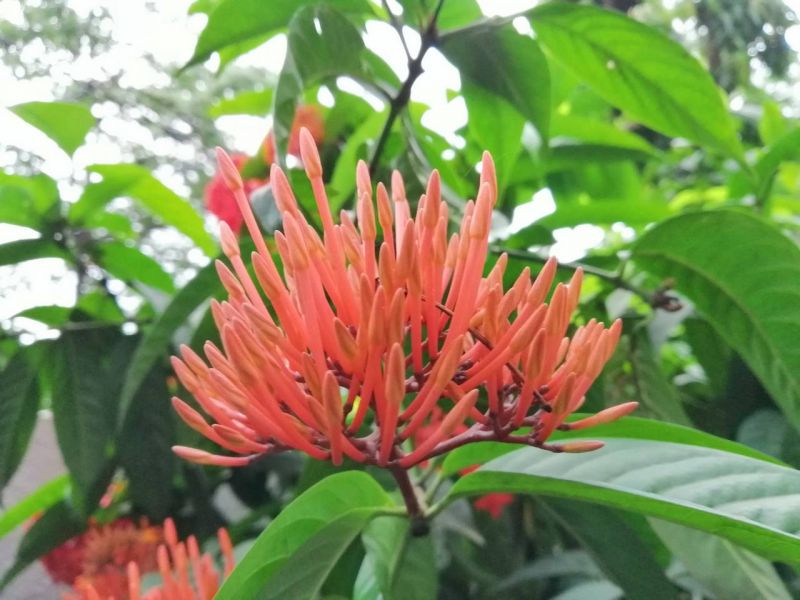 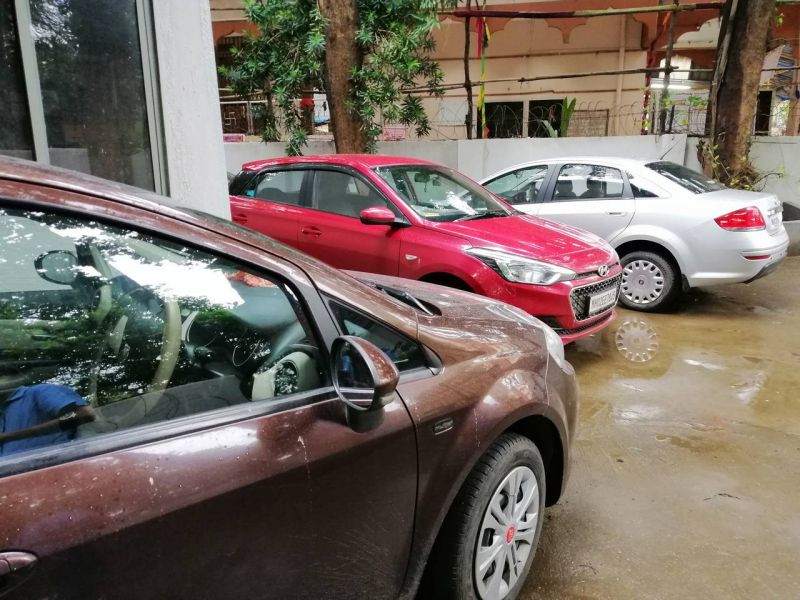 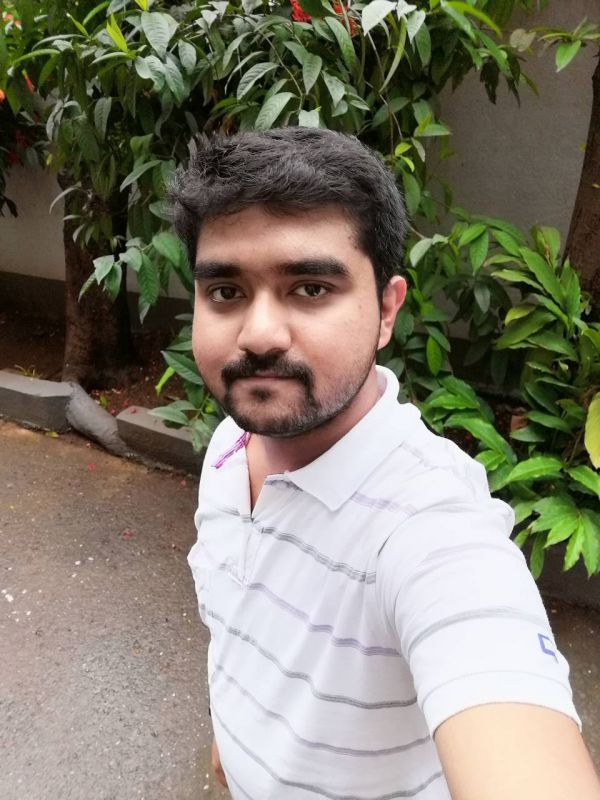 There’s also the iOS’ Animoji-inspired Qmoji, which tracks facial features on certain preloaded cartoon faces to record and share GIFs. The Face Unlock feature works pretty decently as well, except for pitch dark conditions, when it is sensible to rely on the fingerprint sensor for unlocking the device.

This is where Huawei has compromised extensively to keep the costs under control. The Nova 3i’s 3340mAh fuel tank can easily manage a day’s stamina under moderate usage. If all you do is frequent texting, audio and video streaming, light photography sessions and occasional gaming, the Nova 3i will make it the end with around 30 per cent juice remaining. While the 10W quick charging can top up the battery from nothing in around two hours, Huawei could have included support for their 18W fast charging from the Nova 3.

If you look at the midrange smartphones at present, the Nova 3i is certainly one of the most stylish options you have in the market at Rs 20,990. The Iris Purple colour variant alone makes for a solid reason to invest in the Nova 3i. If that’s not enough, users will be certainly happy with the fast and fluid daily performance, a great display as well as above average cameras. Do note that EMUI may not appeal to everyone and the lack of USB-C port may irk those who dig latest features. 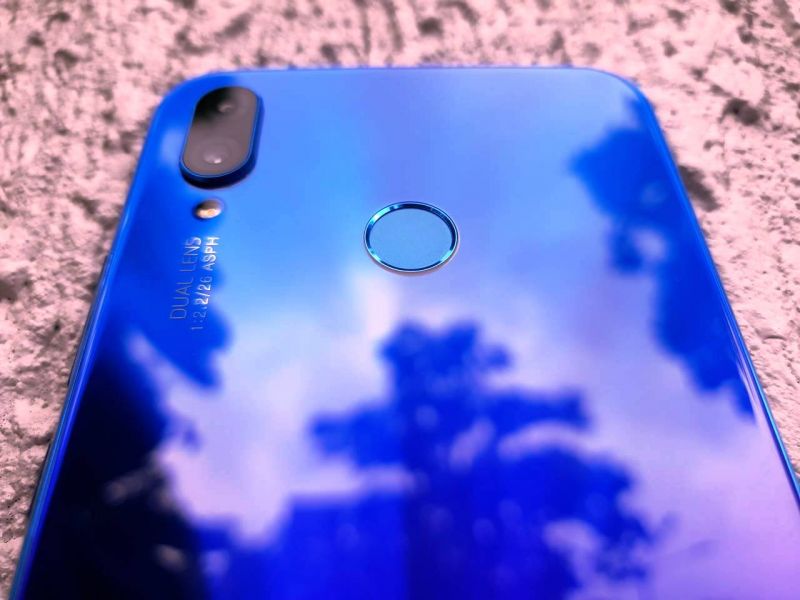 However, if you are looking for a Huawei device in the sub-Rs 20,000 segment and are willing to put with a bloaty EMUI OS and above average camera performance, then the Honor Play comes across as a better bet, considering its flagship class Kirin 970 chipset tuned for gaming and better battery life. In fact, at Rs 19,999, you are getting Nova 3’s levels of performance, if not better, with more or less similar aesthetics for a price slightly lower than the Nova 3i’s. The only reason we recommend the Nova 3i is for the ultra-glamorous aesthetics and a decent quad-camera setup on a budget.

FBI takes down a website that sold private data from breaches

About time? Google boss calls for regulation of AI