The illustrations on the retail box suggest that the POCO F1 will feature liquid cooling technology for maintaining peak performance while gaming or playing 4K videos. (Screenshot: GSM Dome)

Xiaomi's sub-brand POCO is all set to launch its first smartphone — the POCO F1 on August 22. While in India the brand is labelled POCO, globally, it will be known as POCOPHONE. The smartphone will be Flipkart exclusive in India and is expected to be placed in the premium segment to battle with the likes of OnePlus, Honor and ASUS.

Ahead of the official unveiling, a lot has already been leaked and now a new video on Flipkart confirms that the POCO F1 will be powered by a Snapdragon 845 chipset, clubbed along with liquid cooling technology to give a boost to the device’s performance. The video also uses the #AsFastAsYou. The company is touting its phone as "Master of Speed." The new teaser also reveals that Xiaomi has roped in Badminton player PV Sindhu as the brand ambassador.

Moving ahead, speculations are rife that POCO would pitch this device as a gaming-centric phone in the market. Furthermore, an unboxing video by Slashleaks suggested that the handset would feature a premium design and a notch on the front. 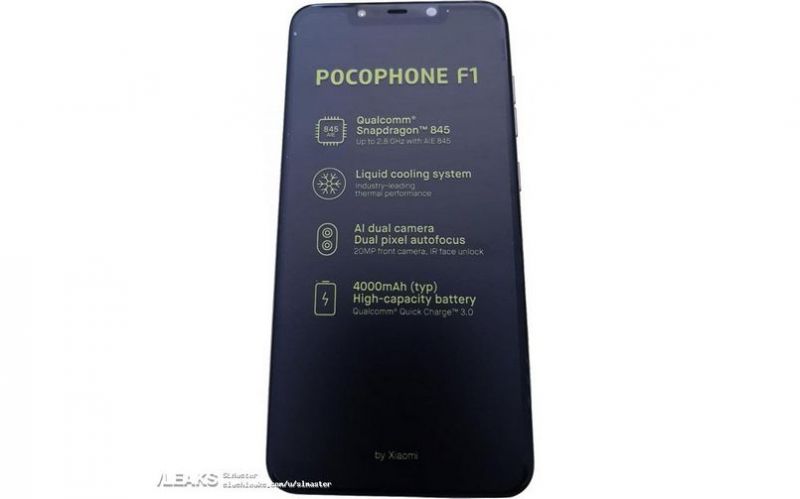 As per the listing, the device would come with 6GB of RAM and 64GB of internal storage, which will be further expandable. In terms of optics, the handset would bear a 12MP+5MP dual rear camera setup and a 20MP selfie camera along with support for IR face unlock feature. There will also be a rear-mounted fingerprint sensor and a 3.5mm headphone jack. The dual-SIM smartphone will be backed by a 4000mAh battery with support for Qualcomm Quick Charge 3.0 fast charging. The device is said to be running Android 8.1 Oreo out-of-the-box with MIUI 9.0 on top.

As per MySmartPrice, the top 6GB/128GB variant of POCO F1 would be priced around Rs 25,000. If this turns out to be true — this device would be the cheapest Snapdragon 845-powered smartphone.