This is what the OnePlus 7T will look like

The new circular camera module has been confirmed to arrive with the OnePlus 7T.

Following in the footsteps of Google, OnePlus has also done the unthinkable and announced the design of its upcoming OnePlus 7T. This handset is expected to launch later this month and OnePlus CEO Pete Lau has officially unveiled the design of the OnePlus 7T.

In a detailed post on the OnePlus forums, Pete Lau has stated the importance of smartphone design. He says, “Exceptional design isn't just about the things you see, but also about the little things that you don't even notice. It's about everything being in the right place, creating a fast, smooth, seamless, and fluid experience.” He adds, “For example the way a phone feels when you pick it up. It's an abstract concept, and it’s very difficult to define or measure. And again, it's one of those things that a lot of people don't even think about. But it’s something we spend a lot of time thinking about because when it's done right, the entire user experience is elevated.”

The unveiling of the design confirms a range of OnePlus 7T features and the most important one being the triple rear camera setup. OnePlus has now added a circular module on the rear that houses the triple camera setup and this may cause trypophobia among those who see it as it has three sensors stacked close together. The brand claims that it had gone through fifty different design iterations to land on something that looks like this. 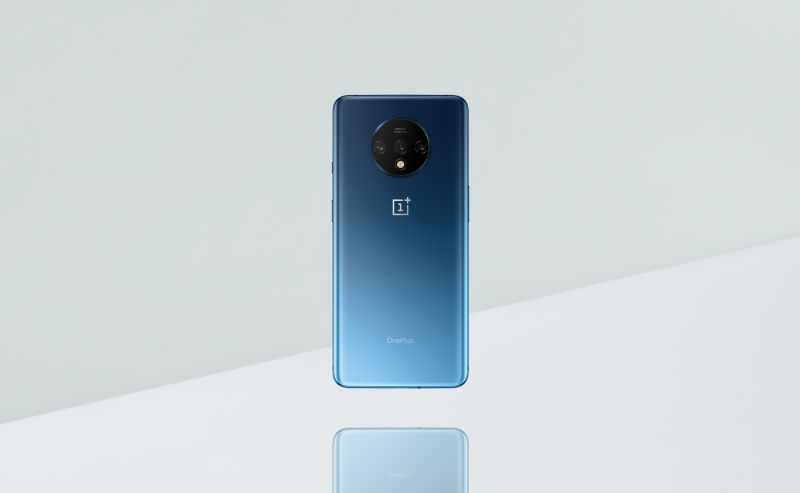 From these fresh images, we also know that the heavily popular Nebula Blue colourway will be making a comeback and this was an extremely popular option for those who picked up the OnePlus 7 Pro. Like the previous generation device, the handset starts off with a blue hue at the bottom and slowly moves into a darker shade of the colour as it goes on top. This colour makes sense as it offsets the black housing of the triple camera system.

OnePlus states that they will be adding a new smooth matte surface on the rear however, they did not go into detail regarding it. Explaining about its previous designs, OnePlus stated, “In 2018, we became the first in the industry to release a smartphone with a four-curved, matte-frosted glass back, but it took three years of testing and perfecting to finalize the development of our groundbreaking chemical etching process, allowing us to bring our signature matte-frosted glass to the stunning Midnight Black and Silk White versions of the OnePlus 6.”