The device will be available in Black, Blue, and Gold colour variants.

Xiaomi is all set to launch Mi Max 3 at an event in China, scheduled to take place on July 19. Furthermore, the company recently confirmed that it will launch two Android One smartphone — Mi A2 and Mi A2 Lite in Spain on July 24.

Recently, Lin Bin, co-founder of Xiaomi, leaked the official press renders of the Mi Max 3, giving a glimpse of how the next phone of Xiaomi looks like. The company has now posted a teaser image of the phone on Xiaomi's Redmi Weibo account, confirming all the specifications of the Mi Max 3. 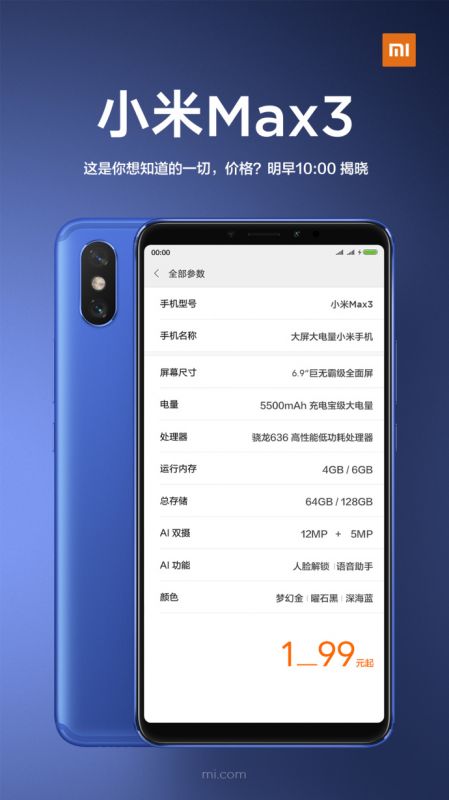 The smartphone will embrace a large 6.9-inch display and will not sport a display notch, as per the official teaser image. At its core, the device will be powered by the Snapdragon 636 chipset aided by 4GB/6GB of RAM and 64GB/128GB of internal storage. The Mi Max 3 will draw its power from a massive 5500mAh battery. The smartphone will sport a 12MP+5MP vertically-aligned dual rear camera set up and an 8MP selfie shooter. The handset could come with AI-based face unlock feature, the Bokeh effect in selfie camera, and AI-powered digital assistant.

The image further confirmed that the device will be available in Black, Blue, and Gold colour variants. Apart from this, the smartphone will be priced anywhere between CNY 1,099 (approx Rs 11,200) and CNY 1,999 (approx Rs 20,400).