Did Apple finally wipe out BlackBerry?

The Canada-based company has rounded to zero per cent share among smartphone operating systems after shipping of 207,000 smartphones last quarter.

The Canadian BlackBerry was earlier known as the king of all smartphones — the best in doing a job of a smartphone during its time, with emails and phone calls. But with the launch of Apple iPhone, BlackBerry started struggling. The job of a smartphone has since shifted to more than being a mere phone — pocketable personal computer, housed with desktop-like operating system and a rich app ecosystem. BlackBerry’s struggle in the OS market remained for years, and finally it has now died down, almost completely.

The market share of BlackBerry’s operating system is down to a flat 0.00 per cent, a newly published fourth-quarter Gartner’s report revealed. The Canada-based company has rounded to zero per cent share among smartphone operating systems after shipping just 207,000 smartphones in the last quarter.

While the other major operating systems, Android and iOS, are advancing year-on-year, BlackBerry’s OS has fallen far behind.

In a blog post, Marco Arment, a web and iPhone software developer argued that ‘Apple could be the next BlackBerry’. Explaining the fall of BlackBerry he said, “BlackBerry had not spent years building a world-class operating system, or a staff full of great designers, or expertise in mass production of luxury-quality consumer electronics, or amazing APIs and developer tools, or an app store with millions of users with credit cards already on file, or all of the other major assets that Apple had developed over a decade (or longer) that enabled the iPhone.” The truth was that the “job of the smartphone shifted almost entirely outside of BlackBerry’s capabilities, and it was too late for it to catch up.”

Apple iOS secured 17.9 per cent operating system market share, according to Gartner Q4 (2016) report, whereas Google’s Android is still leading the OS market with 82 per cent share this Q4. “Android was the only OS to grow market share year on year,” reads Gartner’s report. 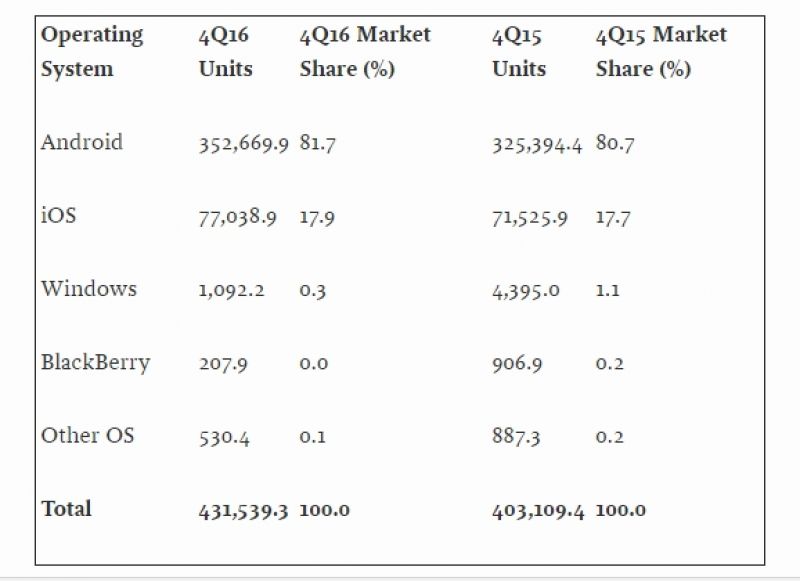 Apple may have wiped out BlackBerry in the operating system market, but the latter is continuing with its effort to grow.

At a media event last year, BlackBerry’s Chief Executive John Chen expressed his concerns over the company’s overall growth saying, “I don't consider ourselves in a turnaround anymore,” “Now we need to execute for growth.”