The rumour mills had them all—the alleged device was touted to have a 2K display with a Snapdragon 820 chipset apart from a USB Type-C port and a few other specifications. (Photo: GizmoChina)

Just a week more and the flagship Mi 5 will be launched in Barcelona by the Global VP of Xiaomi, Hugo Barra. The device was delayed big time and was rumoured to launch in Q4 last year. However, Xiaomi finally revealed that the Mi 5 will be unveiled at the MWC in Barcelona on February 15.

The rumour mills had them all—the alleged device was touted to have a 2K display with a Snapdragon 820 chipset apart from a USB Type-C port and a few other specifications. However, recent news and information from the CEO himself confirmed that the device would sport a huge battery and only a full HD display.

Now that the launch is near, Xiaomi’s flagship smartphone seems to be gearing for shipping and the retail package gave out all the information about the Mi 5 and the company’s secrets were jeopardised. GizmoChina, a Chinese tech website famous for such type of leaks, gave out the entire specifications of the Xiaomi Mi 5. They got hold of a label from the retail packaging which mentions the detailed specifications of the said smartphone. 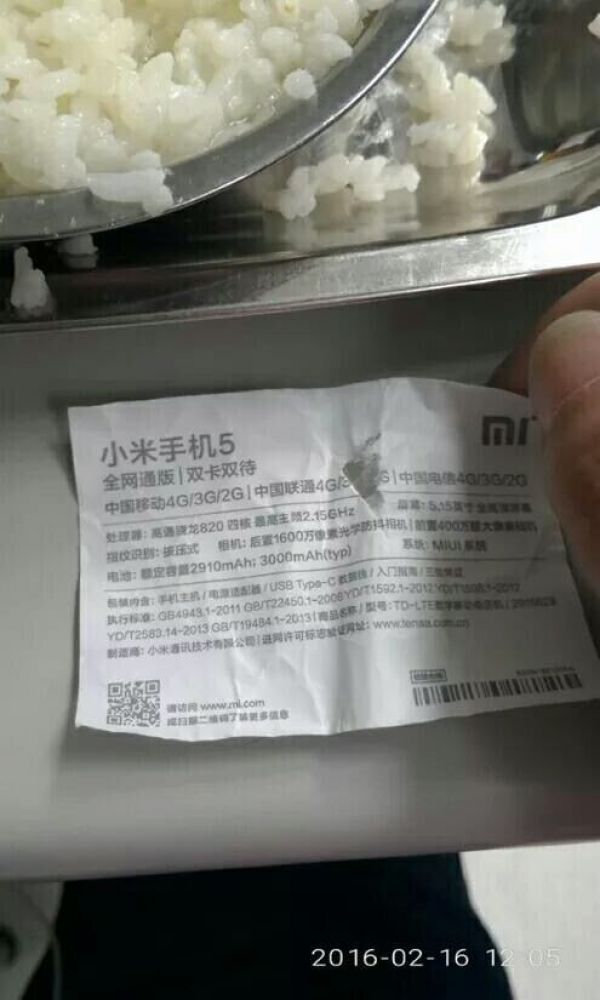 The retail package label that was obtained. (Photo: GizmoChina)

As for the details, the Xiaomi Mi 5 will sport a 5.15-inch full HD 1080p display with a Snapdragon 820 chipset buzzing at 2.15GHz. The rear and front cameras will have a 16MP sensor and 4MP ultrapixel sensor respectively.  USB Type-C, NFC and a fingerprint sensor will also be included in the feature list. Lastly, the battery that will provide the juice for the device is said to be a 2910mAh.

As for the pricing, the GizmoChina predicts the device to be retailed at just 1900 Yuan (Rs 20,000 approximately). However, the actual price will be announced at the MWC launch.