As of now, the specs of the Redmi K20 haven’t been made official, but it is said to feature a 6.39-inch FHD+ AMOLED display with an in-display fingerprint sensor.

The OnePlus 7 series of devices has just been announced and Xiaomi has wasted no time in announcing its next product that’s set to take on the newly announced smartphones. In an official blog post, Xiaomi states, “I'm coming", says Flagship Killer 2.0.”

They go on to add, “Flagships are not everyone’s cup of tea, solely because of the pricing. In a country like ours, where a sizeable population is tech-savvy, not everyone can afford a Flagship.

Flagship Killers breathed a new life into the industry and made smartphones with great specs accessible to the masses.  But it looks like many who promised to be Flagship Killers then have lost their path. They are choosing to “Never Settle” when it comes to pricing.  At Xiaomi, we’ve believed in making innovation accessible to everyone by developing such Flagship Killers. As you will see again soon.

While they don’t officially state that the handset will be called the Redmi K20, by highlighting the K and 20 in red, we get a somewhat official confirmation that it’s the very same handset.

Also, Xiaomi GM, Lu Weibing has announced on Weibo that the name of the device will be the K20. As per the GM, “K series is the performance flagship of Redmi and K is the killer first.” The reason the brand has adopted 20 in its naming scheme is probably to take on Huawei as Weibing states that Xiaomi has a lot to learn from Huawei’s marketing tactics. 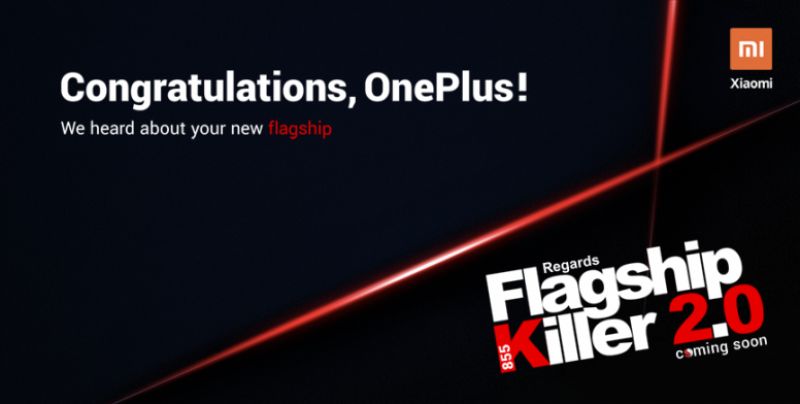 As of now, the specs of the Redmi K20 haven’t been made official, but it is said to feature a 6.39-inch FHD+ AMOLED display with an in-display fingerprint sensor and fitted with Corning’s Gorilla Glass 6. The front-facing camera is said to be housed in a pop-up style unit and it's rated at 20MP. Undoubtedly, the main feature of the handset is the inclusion of a Snapdragon 855 SoC and it will be the first to feature on a Redmi handset.

There will be a triple-rear camera set up on the reverse that will feature a 48MP shooter, an 8MP ultra-wide camera and a 16MP telephoto lens. The battery here will be of 4000mAh with 27W fast charging.