The x86 seems to be the only way to extend the Windows Phones validity and Microsoft itself is believed to be following the same path with its Surface Phone.

There were reports that Dell is working on the x86 Windows Mobile 10 Phone to tackle several markets simultaneously. The device is supposed to serve as a phone, tablet and a desktop. Dubbed as Dell Stack, the device was designed in 2014 and was slated to hit the shelves in 2017.

It was believed that both Microsoft and Dell gave up on the project focusing on other devices. But thanks to known tipster Evan Blass, we now have an idea of how the Dell Stack will look. The image reveals the device along with its dock and will also support Continuum and offer charging at the same time. Both companies are yet to announce the release of the phone. 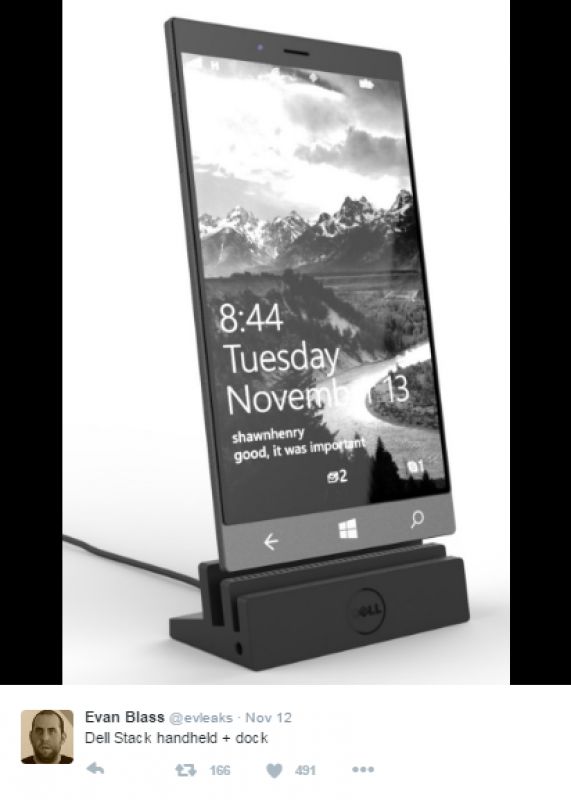 If the leaks are to be believed, the Dell Stack will sport a 6.4-inch display and will ship in different hardware configurations and will be paired with 4GB or 8GB of RAM. There is a possibility that users can get up to 256GB of internal storage and support for MicroSD card is also possible. As for the processor, Dell wanted the Slack to come with a choice of three different Intel Kaby Lake Y x86 processors, including m3, m5 vPro, and m7 vPro.

Since Dell planned to launch the device in 2017, so there is still chance that we may get high-end device by next year. The x86 seems to be the only way to extend the Windows Phones validity and Microsoft itself is believed to be following the same path with its Surface Phone.