DECCAN CHRONICLE. | ANUJ MISHRA
Published Sep 14, 2018, 8:55 pm IST
Updated Sep 29, 2018, 11:46 am IST
The company has targetted the users who desire a phone which fulfills the mere need of communicating with people and minor multimedia usage.

It appeals all those who seek a communicator at its best yet in its easiest form.
Rating:

After dedicating all the blood and sweat into professional life for years, elderly days are when people seek convenience and hassle-free life. With the retirement and wrinkled face comes the need of things which are no-frills, easy-to-handle and simplistic. For catering to these exact needs, iBall offers the Aasaan series of feature phone which are targeted not only at the elderlies but also to those visually impaired. In this era of technological advancements, smartphones have come a long way with multiple cameras and notch displays. However, the group of people which looks for convenience over tech-laden gizmos still exist, in a huge number. 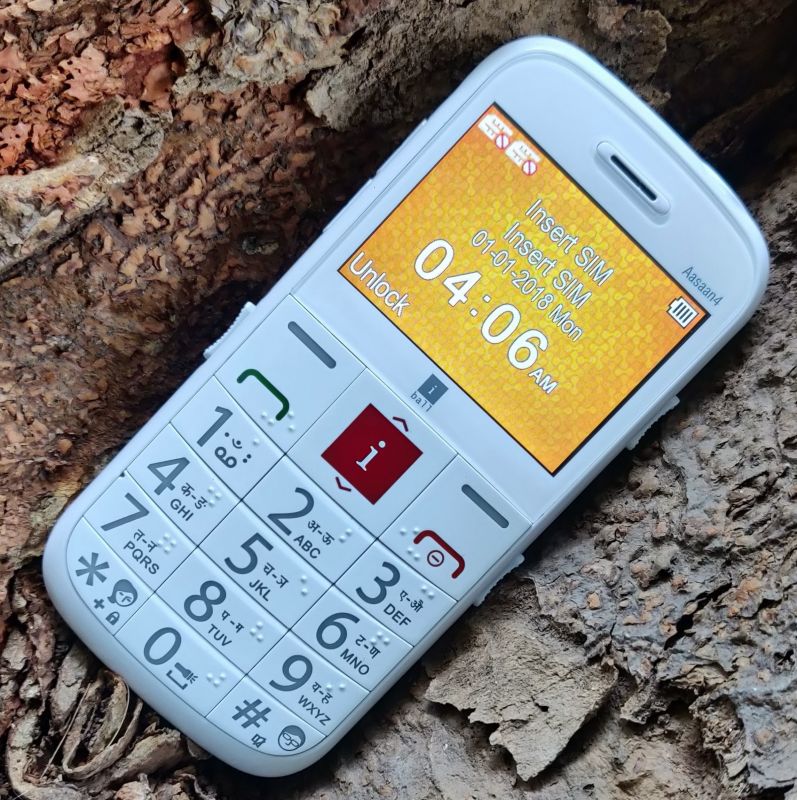 Suitable for such group of audience is the iBall’s Aasaan Senior Citizen phone which is currently in its 4th generation. Priced at Rs 3,499, the device may not be the cheapest in its segment but the company claims it has all that an elder or a visually impaired person would need. The company looks to have figured it out what exactly its targeted consumer wants — from security button to large fonts, from bold keypad to brightly illuminating torch, the iBall Aasaan 4 offers all that is expected from an easy-to-go feature phone.

The iBall Aasaan 4 sports a 2.3-inch colour display consisting of large font for numbers and alphabets. It boasts of a rounded form factor and the slightly bulky size makes it easy to hold in your palm. It is available only in White colour which looks sober and elegant while the T9 keypad with large buttons make the design even more simple yet handy. While dialing a mobile number, the talking keypads call out the digits being typed along with the fairly large font. However, the audio misses numbers in case you are typing them too fast. 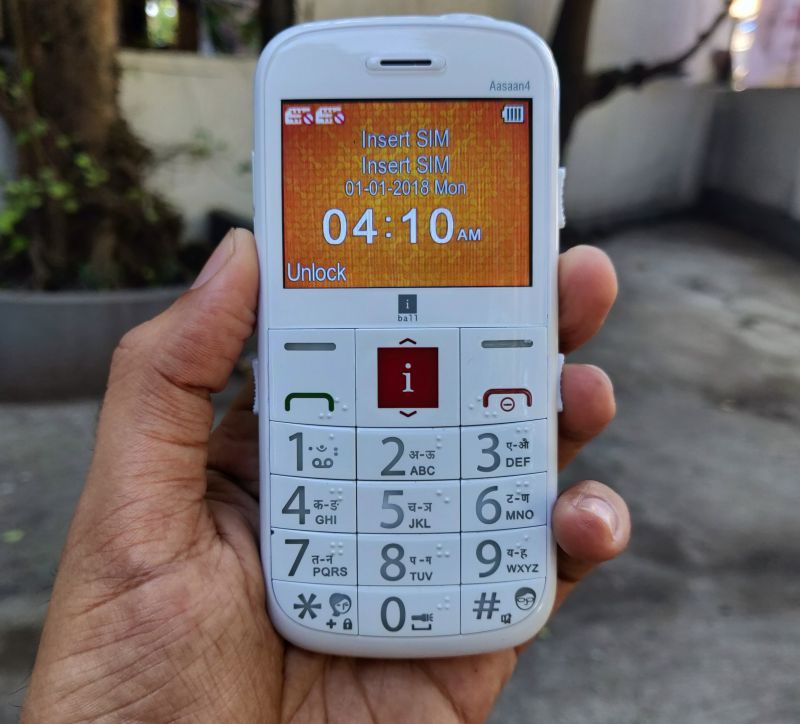 The top of the device houses a torch which has its dedicated key on the right side along with the phone lock button and a mini USB charging port. The other side incorporates a headphone jack, volume buttons accompanied by a toggle switch for initiating FM radio. Moving at the rear you come across a body dominated by a large SOS (emergency) button with a VGA camera sensor on the side and a speaker at the bottom. The rear part can be detached which houses a battery and a dual SIM slot. Overall, the iBall Aasaan 4 possesses a very thought out design and it should be a no-brainer for anyone to get along with it. 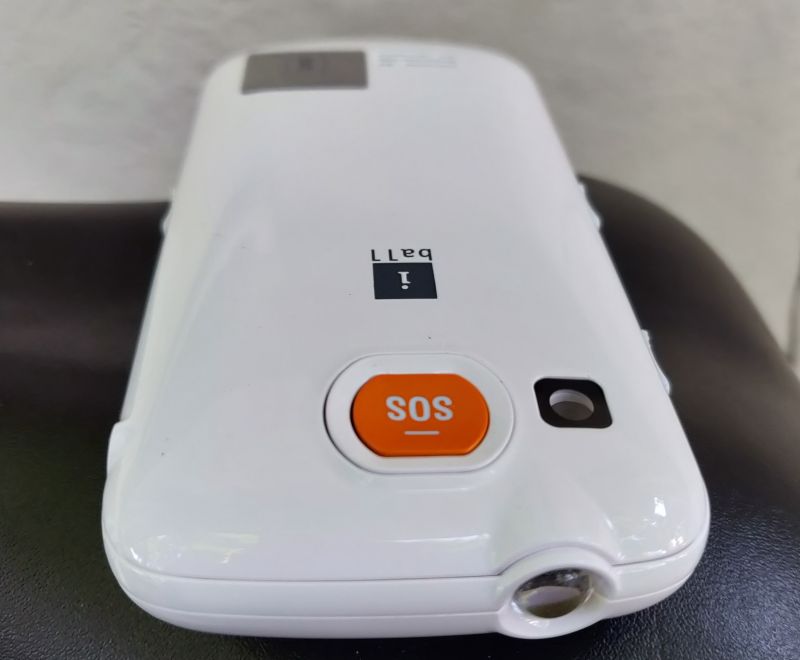 With all the buttons and simple interface, iBall Aasaan 4 allows anyone to get going the moment one takes it in the hand. First up, you are greeted with the keypad with large buttons which have a tactile and responsive feel. The T9 keypad has large keys with clear fonts and, it is the Braille type for those with impaired vision. There’s a huge navigation key at the top centre of the keypad for scrolling through menus and other areas. 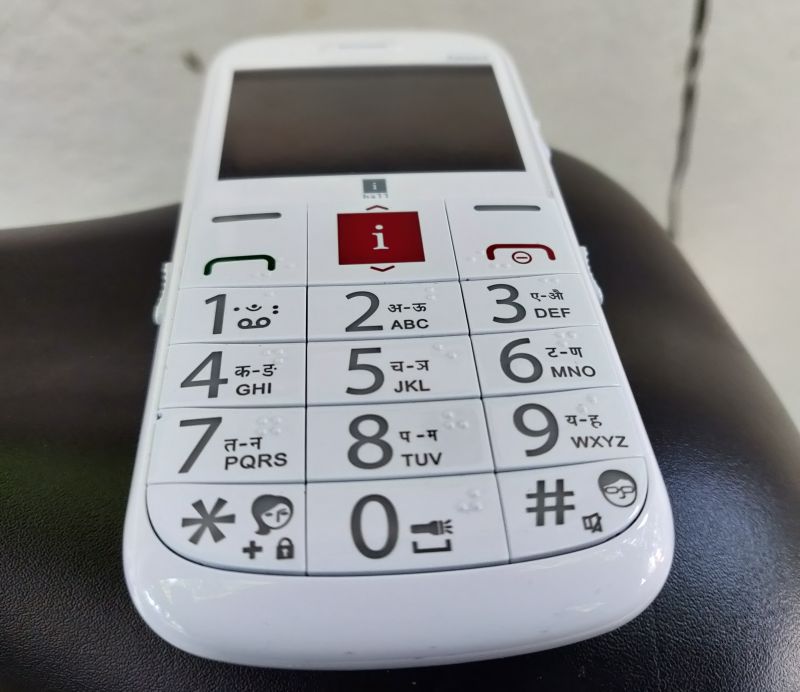 The toggle keys for FM radio, lock and torch are perforated and bulge out for easy operations. Moreover, locking the phone or activating the torch can also be done through the keypad. Enter the menu and you can see large icons displayed single at a time making it easy to understand. The display is crisp and fairly bright and, the brightness can be adjusted to a certain extent.

The iBall Aasaan 4 houses a 2.3-inch TFT display along with a speaker which has been improved over the older versions. For capturing images it comes with a VGA camera (0.3MP) at the back which also supports video recording and the clips are saved in 3GP/MP4 format. Unlike its predecessor, which gets 16GB memory card support, the Aasaan 4 accepts 32GB of microSD card slot for storing multimedia files. Moreover, it can save up to 200 text messages and 1000 contacts on the phone itself. 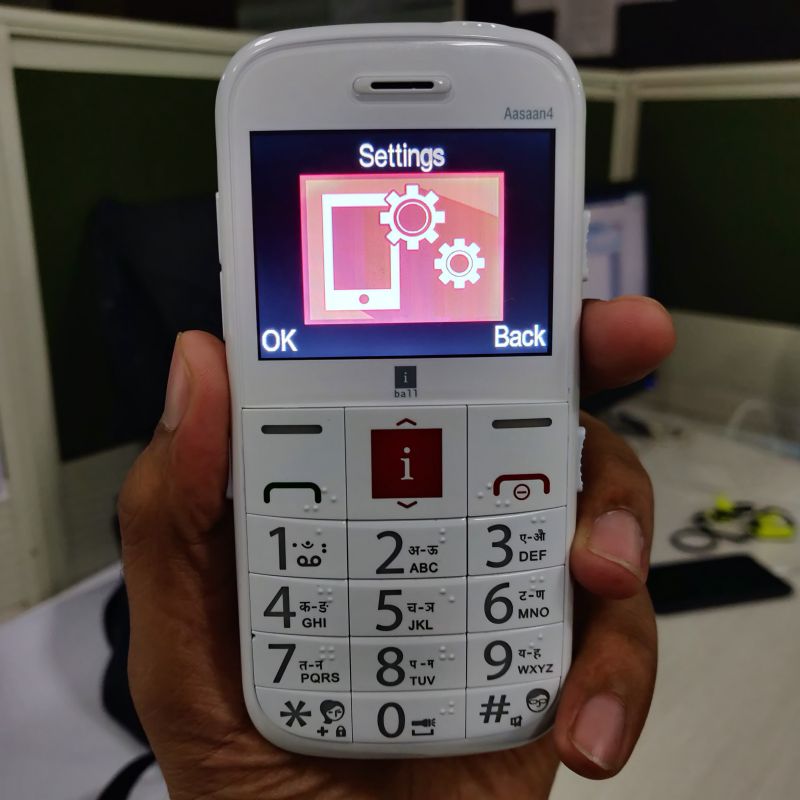 Coming to the connectivity features, the 4th generation Aasaan phone comes with dual SIM card slot and supports 2G GSM network only. For sharing media files from other devices, it gets Bluetooth connectivity while one can also transfer files through USB. Surprisingly, OTG support has also been provided.

Apart from the audio files stored on the SD card, one can also record FM audio clips. Other additional and useful features include Medicine reminder, support for hearing aid, speed dial, task reminder along with magnifier which opens the camera slightly zoomed in. 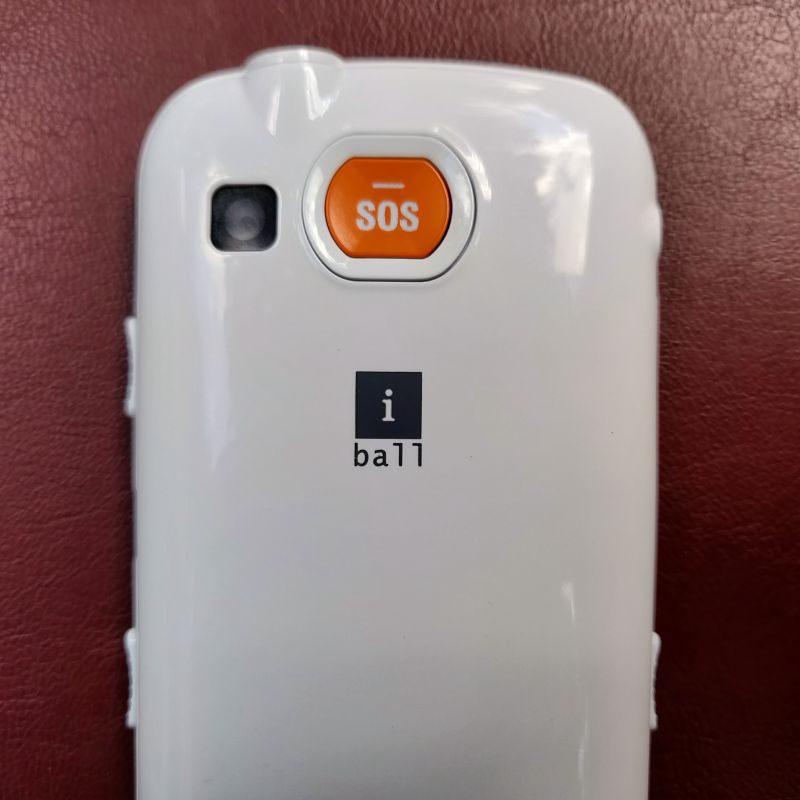 The most useful feature on the iBall Aasaan 4 is the SOS button which has been integrated keeping in mind the safety of senior citizens, disabled and women. Pressing this button activates a loud siren for alerting people around about the emergency. The device also has a tracking feature which sends alert message to the assigned contacts whenever a change in the SIM card is detected.

The Aasaan phone is meant to be a useful device for basic use such as calling, texting along with limited entertainment features. Making calls on the Aasaan phone is extremely convenient with bold fonts for the numbers, keypad which calls out the digits pressed and most importantly, clear audio during phone calls. Moreover, the ringtone volume for the incoming calls is loud enough to be heard from a distance. Texting is also a hassle-free task with the keypads being clicky and prompt. 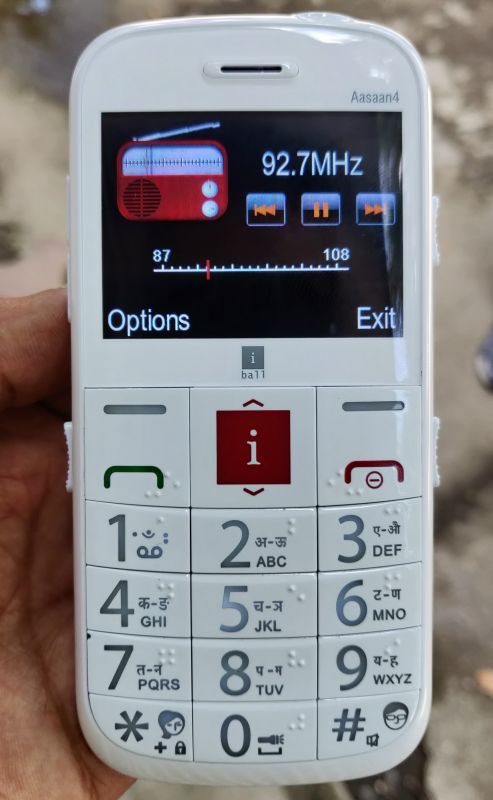 The company has updated the speakers of the 4th gen mobile and while listening to music one could experience this with loud and fairly clear audio. The photos and videos recorded from the camera are not even close to the modern smartphones but that's absolutely not what this phone is supposed to do. For managing the stored files, it gets a file manager with a simple interface consisting of the large icon for the folders. 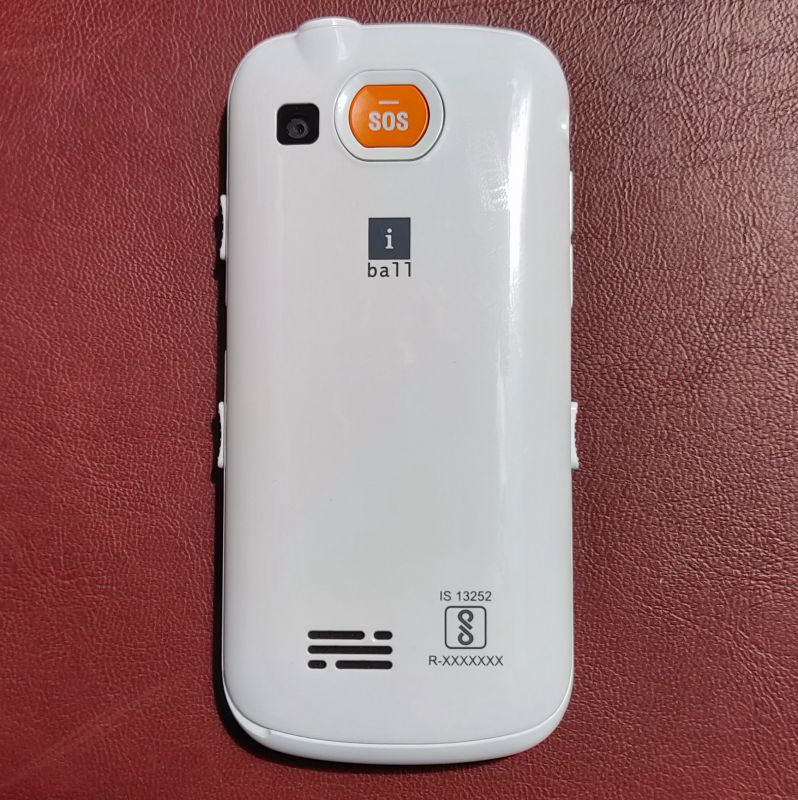 The torch has ample of illumination which is bright enough to be useful in dark surroundings. The siren for the SOS button is annoyingly loud but that's the purpose it has. However, one needs to take care that it doesn't get accidentally clicked as removing the battery is the only way to stop it.

The battery of the phone is what most feature phone users are concerned about. On that front, the 1800mAh Li-Ion battery of the Aasaan 4 impressed us providing around two days of continuous usage which included basic calling and texting with timely music playback.

The iBall Aasaan 4 is priced at Rs 3,499 and after spending a few days with it, it's certain that every penny spent on this phone is worth it. The company has targetted the users who desire a phone which fulfills the mere need of communicating with people with minor multimedia usage, all of that in the most uncomplicated ways. Apparently, iBall succeeded in doing that. With the no-nonsense interface, basic yet mandatory features and SOS button, the Aasaan 4 could be an ideal device.