After news broke that the Samsung Galaxy Note 10 will come with less than ideal specifications namely with the display and the headphone jack there is some great news coming its way and this is going to please Samsung fans the world over. Popular Samsung tipster @IceUniverse has taken to Twitter and dropped a bombshell. He has posted an image what he refers to as the Samsung Galaxy Note 10’s screen protector and the interesting takeaway here is that it comes with a display that has no notch or punch-hole cut out for the front-facing camera.

As per the ever vigilant @IceUniverse, the Samsung Galaxy Note 10 features extremely slim bezels around the display along with curved edges. The screen protector lacks a cut-out for the centrally located punch-hole camera which ought to be centrally located as per leaked images. The Samsung insider claims that the screen lacks this cut-out as the size of the punch-hole is not yet know. A related report by BGR states, “Even still, the leak shows accessory makers are already preparing their new products for the Note 10, and that we’re indeed looking at a redesign compared to last year’s Note 9. It’s also going to be a design that’s different from the S10 phones.”

The Galaxy Note 10 is expected to feature a centrally-located single-lens selfie camera in an Infinity-O display and it will come with an in-display fingerprint sensor. Reports suggest that the handset will come with an Ultrasonic fingerprint scanner that’s similar to the Galaxy S10 line-up. We hope that it works a lot faster than the S10’s version as it was painfully slow. The rear of the device will come with a quad-camera setup that’s vertically aligned and placed at the top-left of the Note 10.Also, there will be a Time of Flight sensor next to the main camera setup. 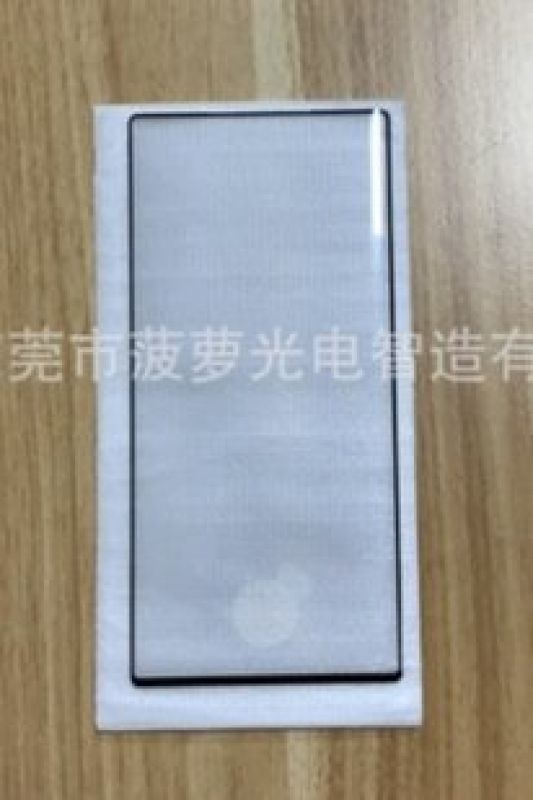 While the Galaxy Note 10 will feature some major upgrades, it is also rumoured to come without a headphone jack; making it the first flagship from the brand not to come with one.