WhatsApp to get ‘Speak’ feature soon?

The feature can be a boon for drivers, chefs, craftsmen, and many others who are in professions where both their hands are occupied.

Can WhatsApp read your messages out loud? Probably it will soon. Well, according to a new report, WhatsApp will soon implement a new feature that will help users hear their messages rather than see them.

According to a report on The Times of India, WhatsApp has been secretly testing a new feature called Speak. This new feature will help users hear their messages as WhatsApp’s Speak will read the messages out loud.

Presently, the new feature was only spotted on an iOS device, which (as seen in the picture below) shows a new option called ‘Speak’ when selecting a particular message. If true, the new feature could be a big help for users who cannot have their hands free, but definitely don’t want to miss out on an important message. The feature can be a boon for drivers, chefs, craftsmen, and many others who are in professions where both their hands are occupied. 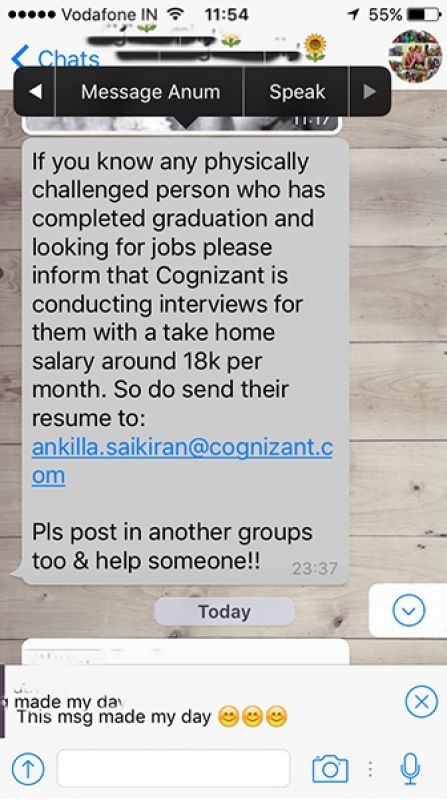 However, as for what the feature seems in the photo, you still need to select the message and click on Speak to have WhatsApp read it for you. It would have been nice if there was a setting that could read all messages out loud. For now, Speak seems to be good enough for lengthy messages only.

At present, not all iPhones seem to have this feature installed. The report has not mentioned whether it was a beta version or a test version or even the version number. There is no further information about what the other feature ‘Message Anum’ which is seen in the image.

You can opt to become a beta tester and get new updates before the final version is released to public. To enrol yourself into the beta testing platform, click on the link below.

Also read: WhatsApp Beta: how to become a beta tester, get early updates