Apple's TouchID will use many in-display cameras

DECCAN CHRONICLE.
Published Aug 10, 2018, 7:25 pm IST
Updated Aug 10, 2018, 8:28 pm IST
the company will be placing multiple cameras under the display of its devices for executing the 3D fingerprint scan.

The system will consist of dielectric layer under the display below which will sit multiple image sensors.

When it comes to innovations, Apple is mostly at the forefront with its creative and efficient approach in terms of technology. This time, the company will be placing multiple cameras under the display of its devices for executing the 3D fingerprint scan.

The first report about this came in October 2017 which revealed that Apple will be pushing its fingerprint scanning mechanism under the display and the company had also filed a patent for it. It was known that the iPhone-maker will utilise ultrasonic biometric sensing technology for accomplishing their requirement.

Perhaps, the development of the system has advanced to a considerable extent and now, according to a patent application published by the US Patent and Trademark Office, the Cupertino-based manufacturer will be using an array of cameras within the display for capturing the fingerprint as TouchID. 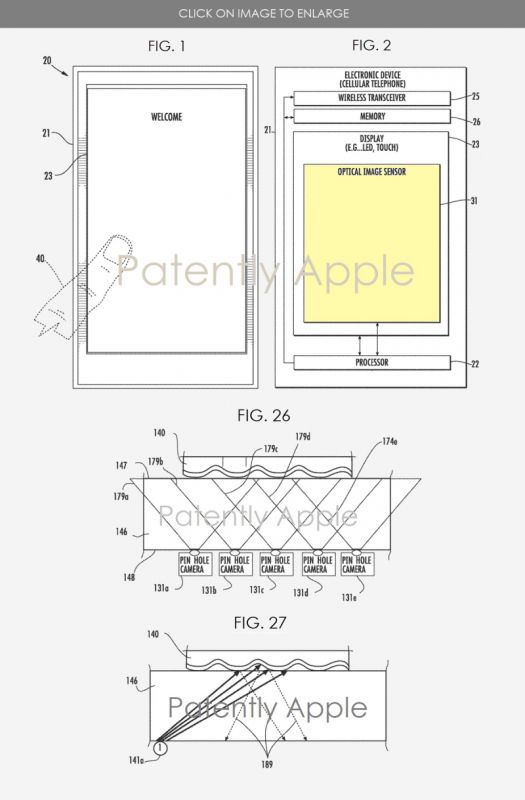 Digging deeper into the matter, our source explains this new mechanism in brief. The system will consist of dielectric layer under the display below which will sit multiple image sensors (pin hole cameras). The second major unit will be a single light source which will strike a light on the user's finger. The reflected image will be captured by the image sensors which will pass on the sensed picture data to the controllers for the accumulation of data. The data will be saved in the form of fingerprint ridge 3D data.

The current face ID feature from Apple is available only on the flagship iPhone X. However, the company is expected to infuse this technology in other high-end devices in the coming days. Patent of this new TouchID technology signals towards possible options of security we might get in different iPhone models.