As with every Google flagship device of the past, the Pixel 3 XL is certainly a very exciting Android smartphone.

For the last few months, the Internet has been hyped about the Google Pixel 3. A bunch of massive leaks had already suggested what to expect from Mountain View’s geniuses in October’s launch event. Many believed that the leaks were given out previously to mislead the world while Google was busy testing a secret yet revolutionary Pixel 3 behind the doors. Well, the day has finally arrived and Google made the Pixel 3 and Pixel 3 XL public. And surprisingly, these were the same phones that were leaked out by tipsters a few months ago.

The Pixel 3 is essentially an improved design of the Pixel 2 XL, while the Pixel 3 XL features that highly polarising huge notch and a thick chin. However, as mentioned during the event, the new Pixels are packed with lots of new intelligent additions, especially with regards to the camera department. The base 64GB Pixel 3 starts from Rs 71,000 in India while the XL model will ask a minimum of Rs 83,000 and go up to Rs 92,000 for the 128GB variant. The Pixel 3 will be available in Just Black, Clearly White and Not Pink. We have our hands on the Just Black Pixel 3 XL and after spending just a few hours with the handset, here's what we think the 2018 Google flagship has to offer. 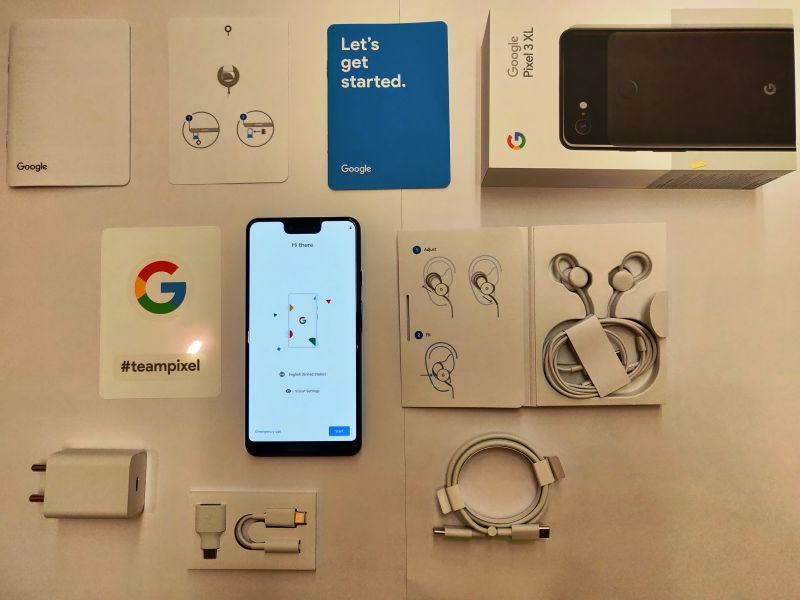 Up front, the Pixel 3 XL has a huge notch on top and a wide chin. Compared to the recently announced iPhone XS and even the iPhone XR, the Pixel 3 XL does look at a slight disadvantage at first glance in terms of desirability. However, as with any ‘notched display’ design, you start getting used to it over the course of time. 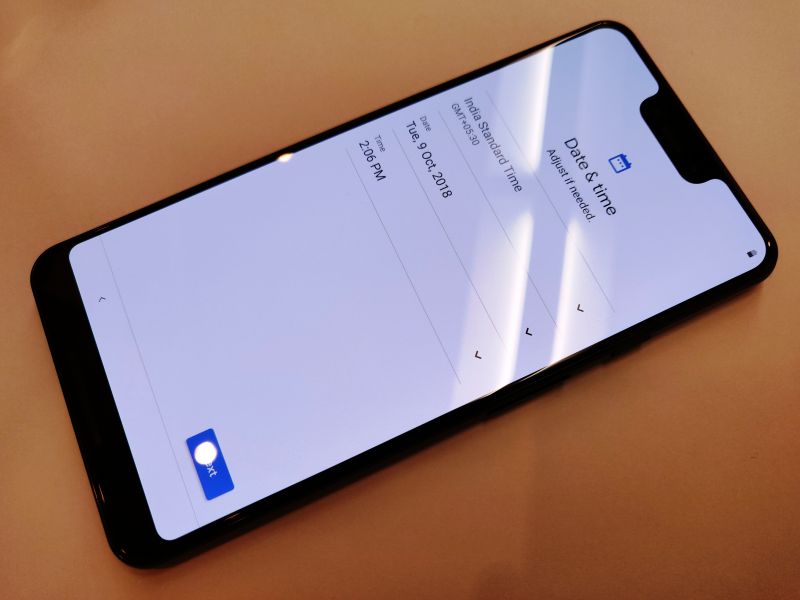 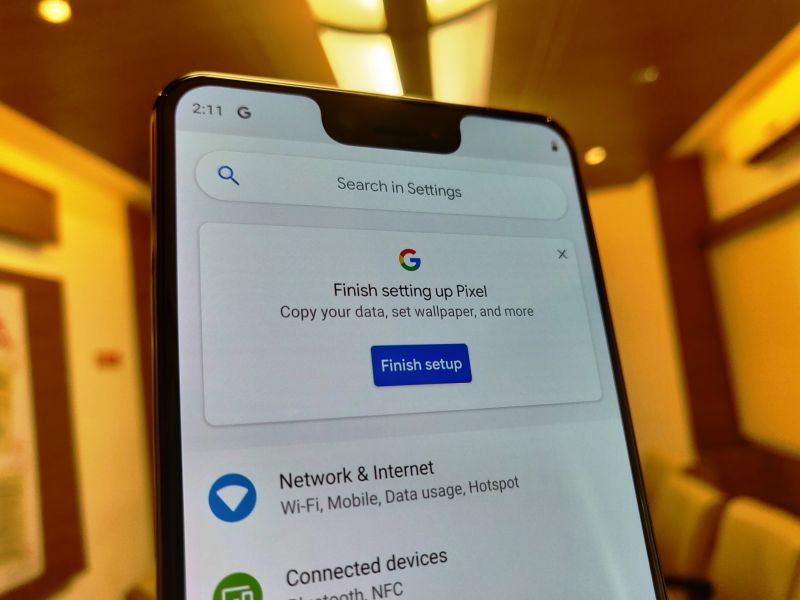 One can agree that the Pixel 3 XL isn’t one of the catchiest phones of 2018, especially after you look at what the competition offers. However, before you start developing a hatred for the notch on the Pixel 3 XL, do know that there are plenty of reasons why Google went ahead with this design. The huge notch on top of the display houses two cameras and an earpiece which doubles up as the second speaker. The chin below houses a relatively larger loudspeaker. Surely, for a phone of the flagship cadre, Google could have done something to ensure an aesthetical appeal more akin to the latest trends of slimmer bezels and a smaller notch. Nonetheless, these odd elements give the Pixel 3 XL a distinctive presence of its own. 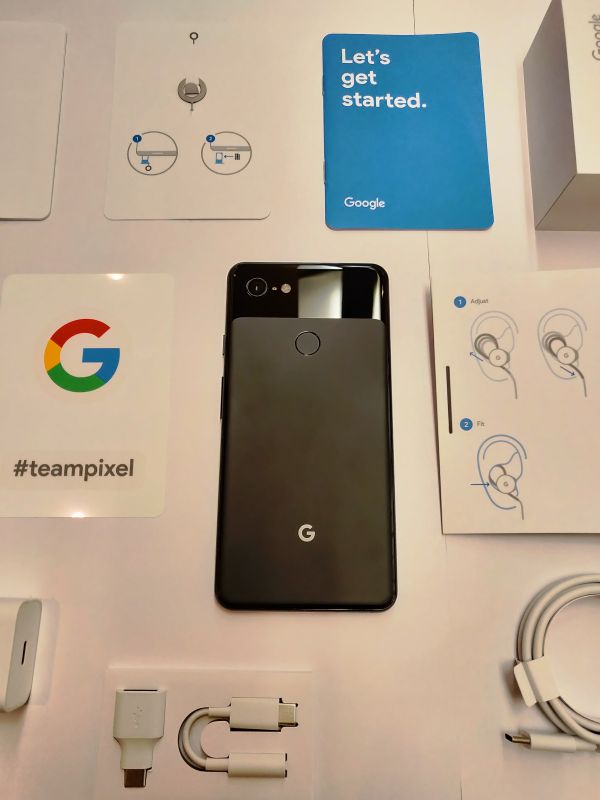 Look around and you will find a USB-C port alongside the single SIM card tray situated on the glossy metallic frame. The usual volume rockers, as well as the power button, are situated to the right, while a secondary noise-cancelling microphone sits on the top. 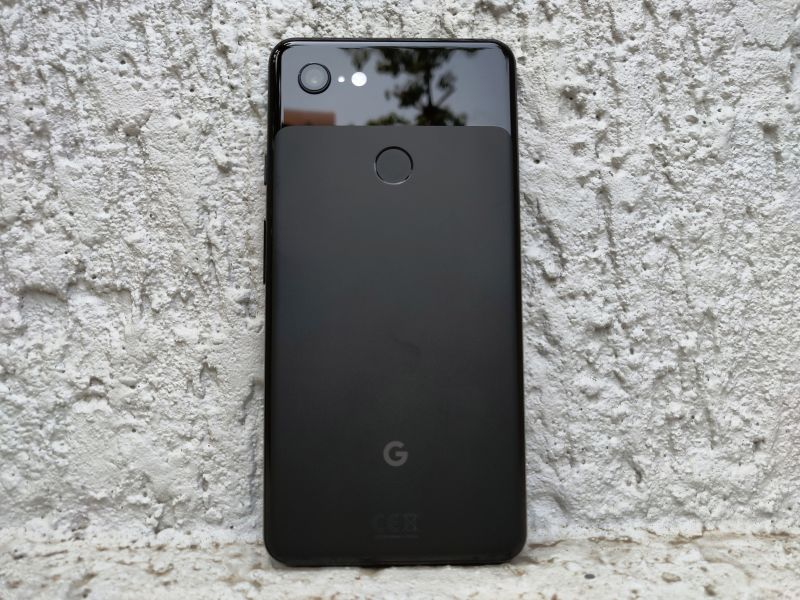 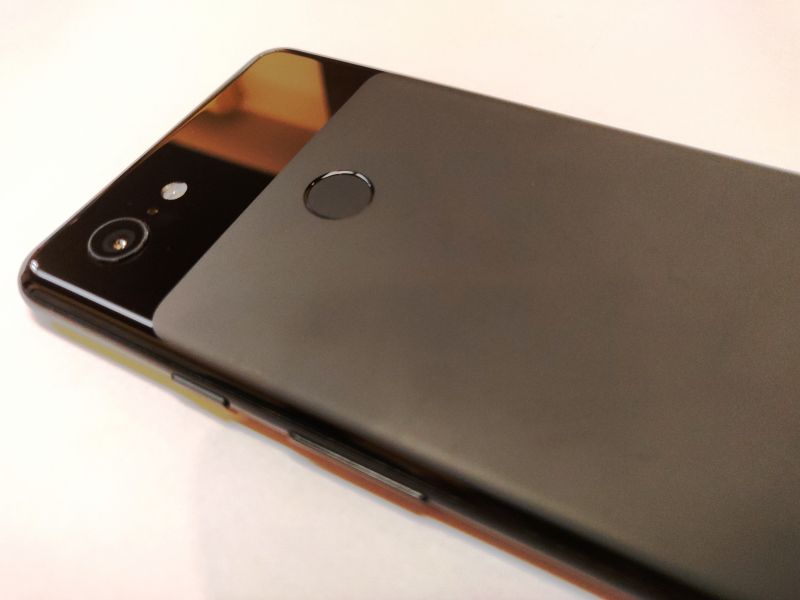 The rear at first glance looks very similar to the Pixel 2 XL — thanks to the familiar dual tone glossy-matte combo finish and a single rear camera. However, unlike the Pixel 2 XL’s metal-glass combo rear, the Pixel 3 XL’s rear is completely made out of glass — specifically Gorilla Glass 5. The matte finish you see here is actually similar to the matte finish on the Midnight Black variant of the OnePlus 6. The matte finish helps in keeping smudges and fingerprints at bay while retaining the Pixel’s signature identity. The all-glass back has also now paved way for wireless charging on the Pixel 3 XL. And yes, the fingerprint sensor still exists as Google hasn’t opted for facial recognition yet. The Active Edge returns for giving a shortcut for the Google Assistant. 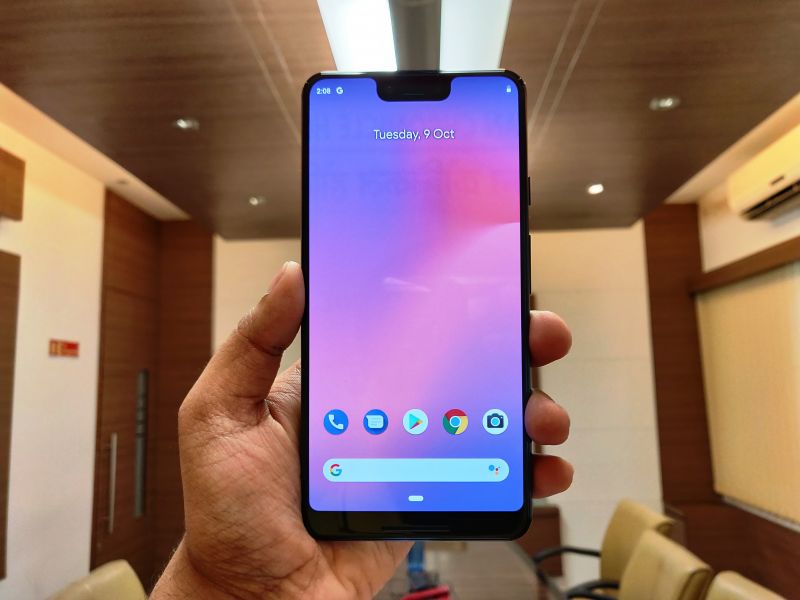 With the Pixel 3, Google is offering an 18:9 full HD OLED panel that measures 5.5-inches with noticeable bezels all around. On the XL, it’s a bigger 6.3-inch OLED panel with an aspect ratio of 18.5:9 — thanks to the huge notch. The picture resolution also gets an upgrade to QHD+ resolution (2960 x 1440). The display is protected by a layer of Gorilla Glass 5 and also gets native support for HDR colour formats. At first glance, the display looks impressive. Unlike Samsung’s extremely vibrant Super AMOLED panel, the one on the Pixel 3 XL is tailored for natural colour tones. There’s a slight shift in colour tones while viewing from wider angles, but isn’t bothersome as the Pixel 2 XL’s unit. We will reserve our judgement till our final review in a week or two.

This is one area where Google’s flagships are known to lead the way for the Android universe. Like previous years, Google has once again shown that you don’t need massive amounts of RAM to deliver a fluid Android experience. With just 4GB of RAM as standard and a Snapdragon 845 chipset looking after the daily errands, the Pixel 3 XL is supposed to be as smooth as silk out-of-the-box. Android 9 Pie is the operating system with the latest security patch installed. The Visual Core chip makes a return to take care of the camera duties on the handset while another Titan M Security module is there to take care of all the security concerns. 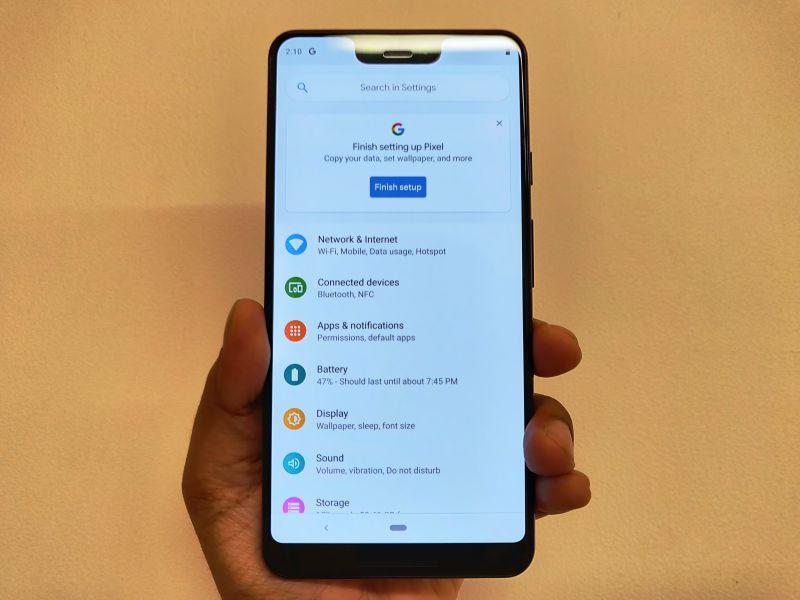 In our brief moments with the Pixel 3 XL, the phone felt effortlessly smooth and fluid. With optimised animations and screen transitions, the navigation feels incredibly choreographed. The Pixel Launcher hasn’t changed much when compared to the version on the Pixel 2 with Android 9, so you are greeted with a familiar Pixel experience. 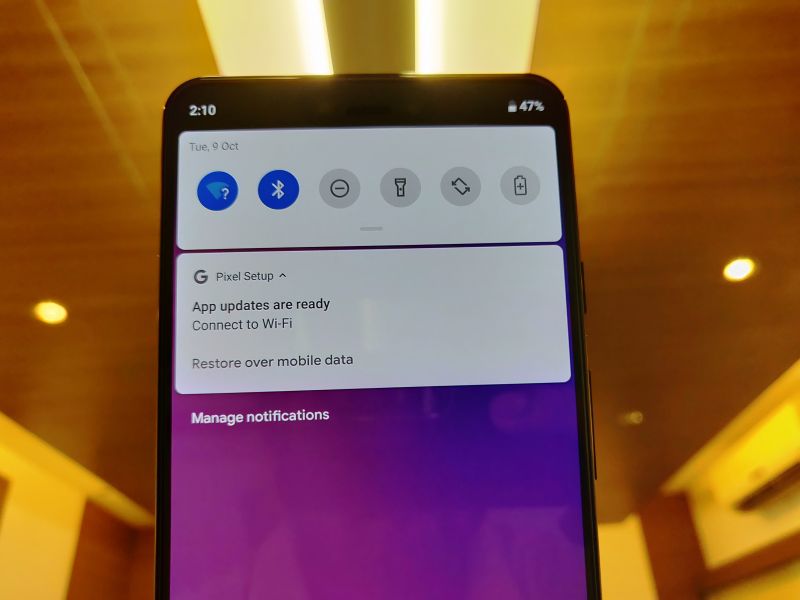 The Snapdragon 845 should ensure that you can throw anything at it without worrying about compatibility issues. Over the next few weeks, we will put the Pixel 3 XL through its paces to see whether Google’s latest kid has got the guts to challenge the established daddies of the Android universe. 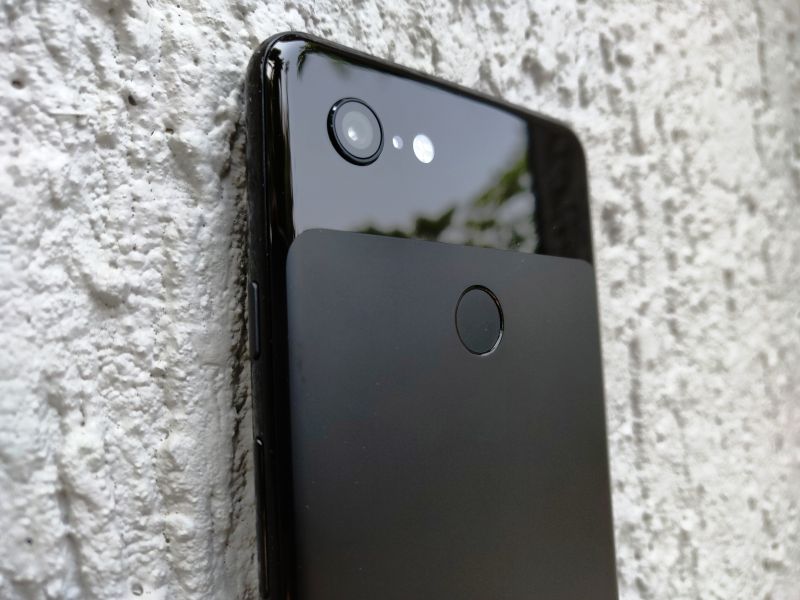 This is where our expectations are the highest — Google still feels that a well-designed software can easily churn out class-leading photos from a single camera where other flagships are showing off dual and triple camera setups. The Pixel 2 blew minds last year with its optical prowess and the Pixel 3 Xl is looking to carry on the legacy ahead once again. For the rear, there’s a 12.2MP lens with an aperture of f/1.8 and a 1.4μm sensor. As usual, there’s OIS as well as EIS on board for image stability. A new spectral and a flicker sensor is there to improve image quality in varying lighting conditions. An 8MP wide angle + 8MP normal sensor fixed focus front camera setup with a f/2.2 aperture is promised to take some of the most impressive imaging results. 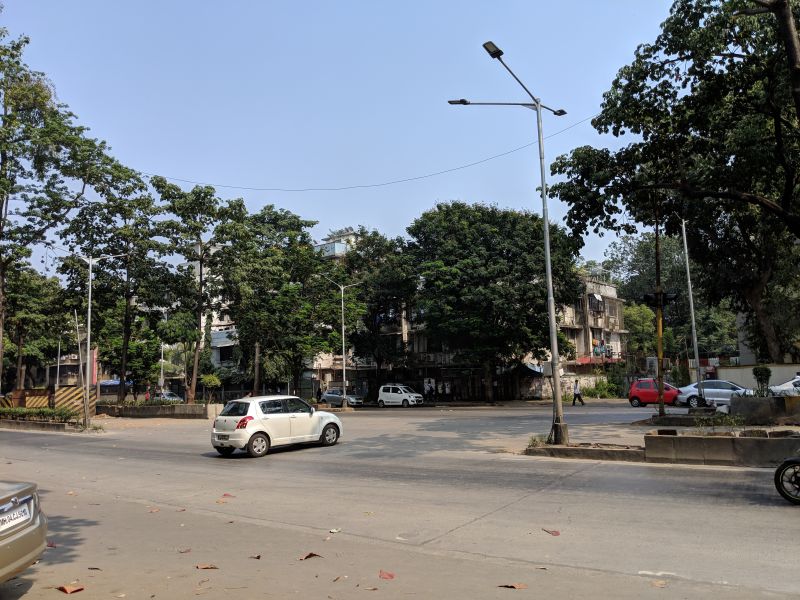 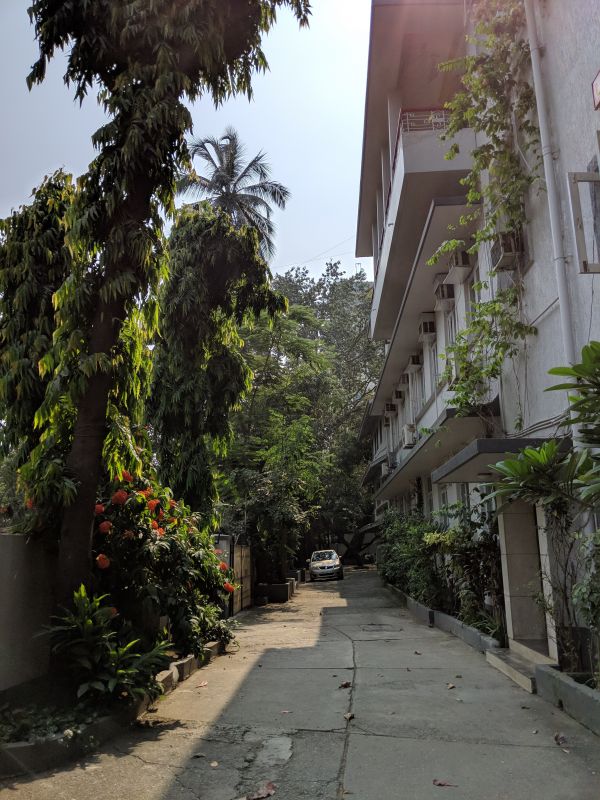 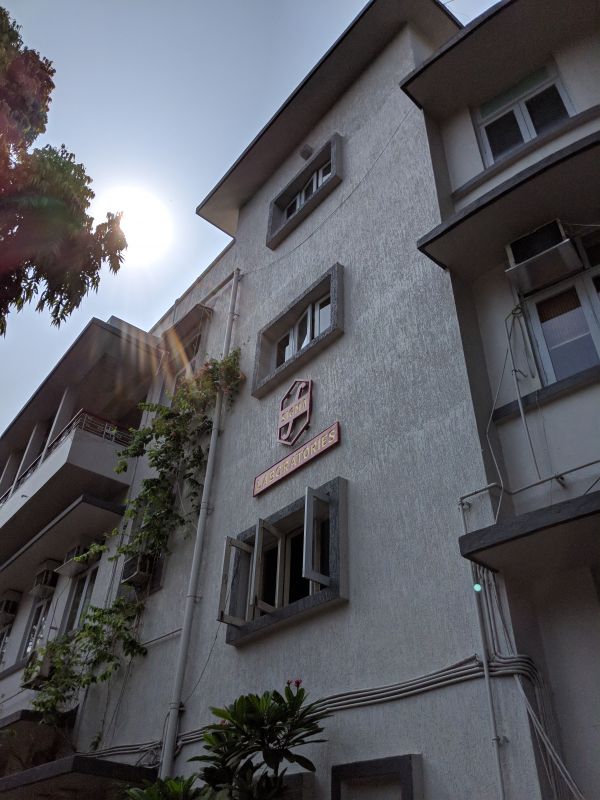 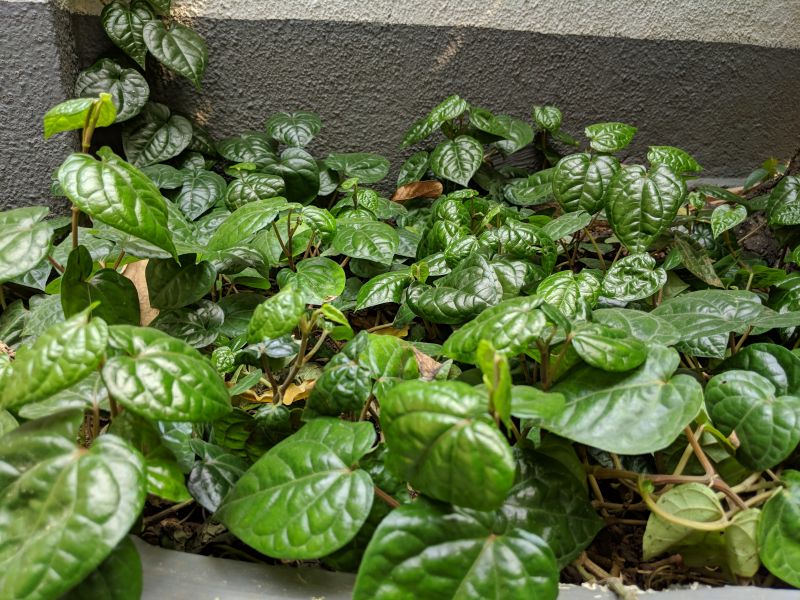 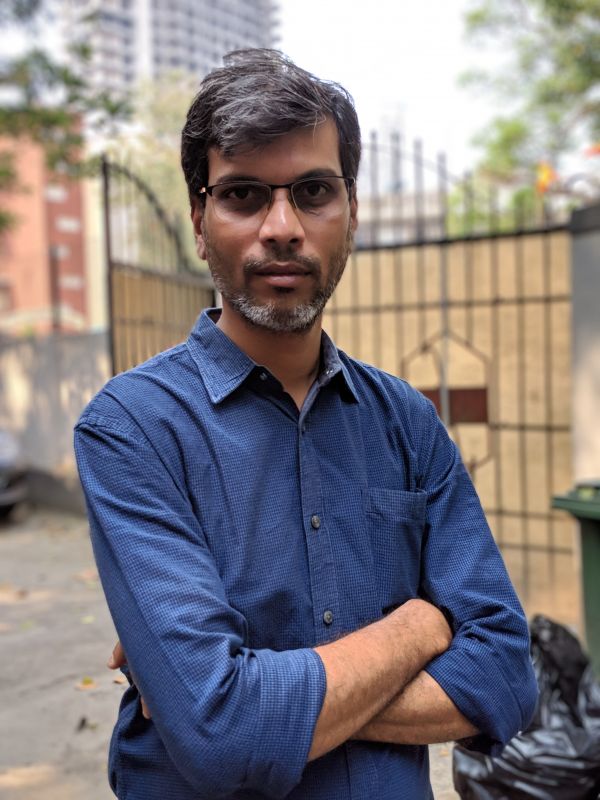 A portrait shot from the rear camera 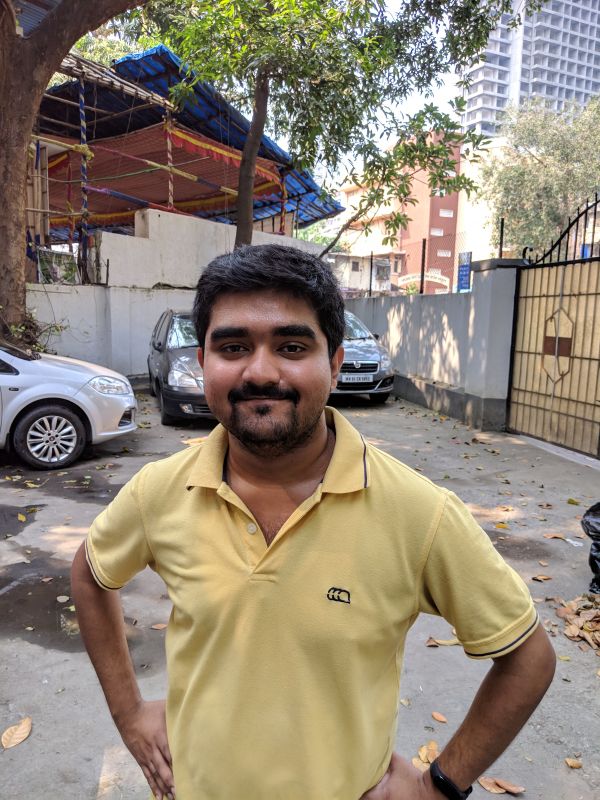 A sample from the rear camera with HDR+ enabled

The first of the few photos we took around the office gave us a fair idea of how improved the imaging capability has Google baked into the new phone. With the Visual Core chip underneath, the Pixel 3 XL’s camera shows extremely promising results. It’s easy to see how Google’s dual pixel technology paired along with the AI algorithms work intelligently to ensure incredible levels of details in images — whether it's from the front or rear. The details are immaculate while the colours appear to be more natural than before. Google has baked in an HDR+ mode that takes up to eight frames and combines them to choose the best exposures while maintaining the colours and keeping the noise levels under control. The Portrait mode on both rear and front cameras still appear to be class leading — the edge detection is on spot. The front camera also benefits from the wide-angle sensor, giving out selfies with extremely wide angles and including as many people as it can. 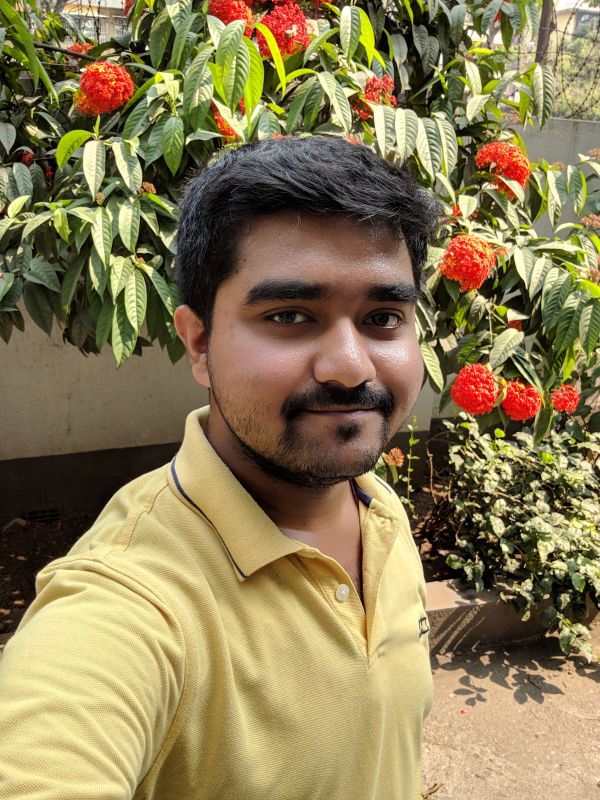 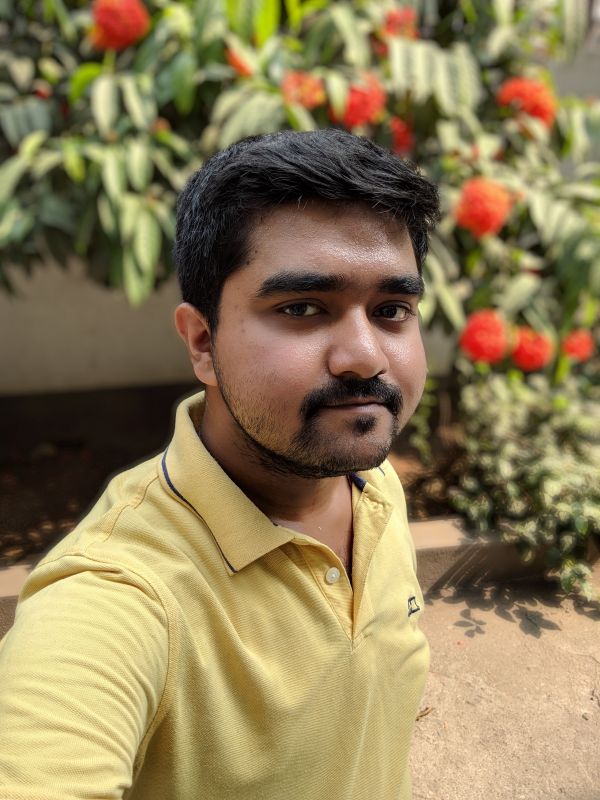 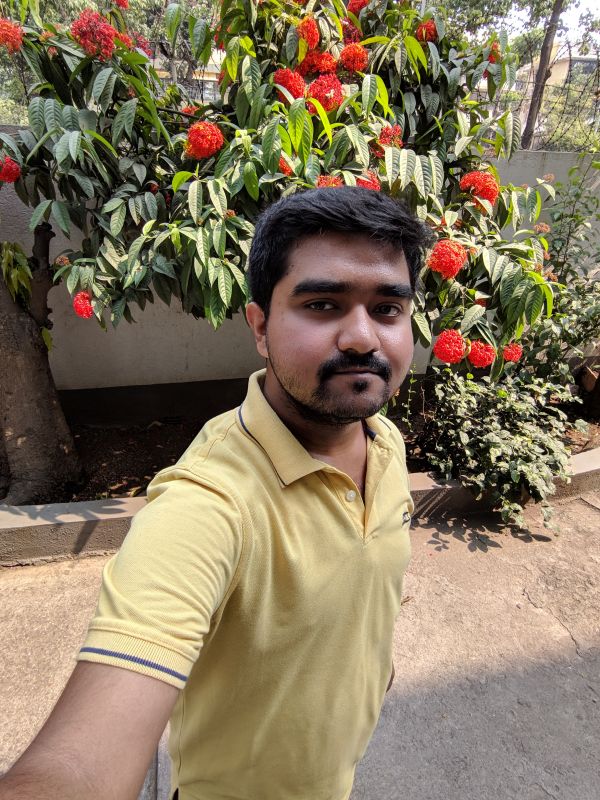 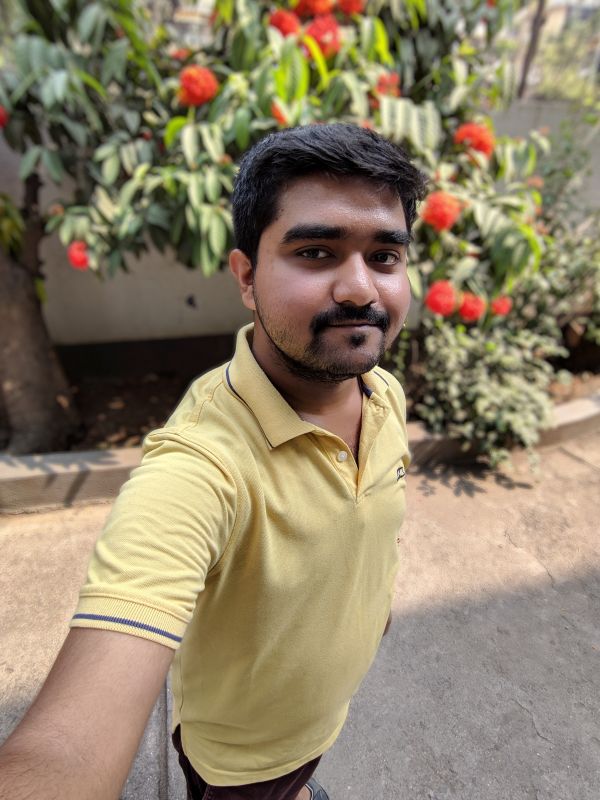 In wide-angle mode with portrait enabled

Google has also baked-in several smart features such as Top Shot (recommends best shots in Motion images), Photobooth mode for capturing photos using several gestures and several others. We will try these out extensively over the next few weeks.

Since smartness is Google’s theme for the Pixel 3 range, Google has made sure the new Pixel stays alive for longer to be the helpful tool instead of just being another power-hungry flagship Android smartphone. The Pixel 3 is kept alive by a 2915mAh battery while the bigger XL gets a 3430mAh power tank. Google says the Pixel 3 Xl can stay alive for up to 14 days on LTE standby. The 18W USB-C wired fast charger can get up to 7 hours of life with just a 15-minute top-up. Fast wireless charging with 10W output should also make for faster top-ups while your phone is lying on your desk or your car’s wireless charging enabled dashboard. Sadly, the USB Type-C to Type-C cable could hinder your data transfer experience as you would need to purchase a USB Type-C to a standard USB converter to connect to your PC. Else you would have to adopt a wireless transfer software to get your job done. 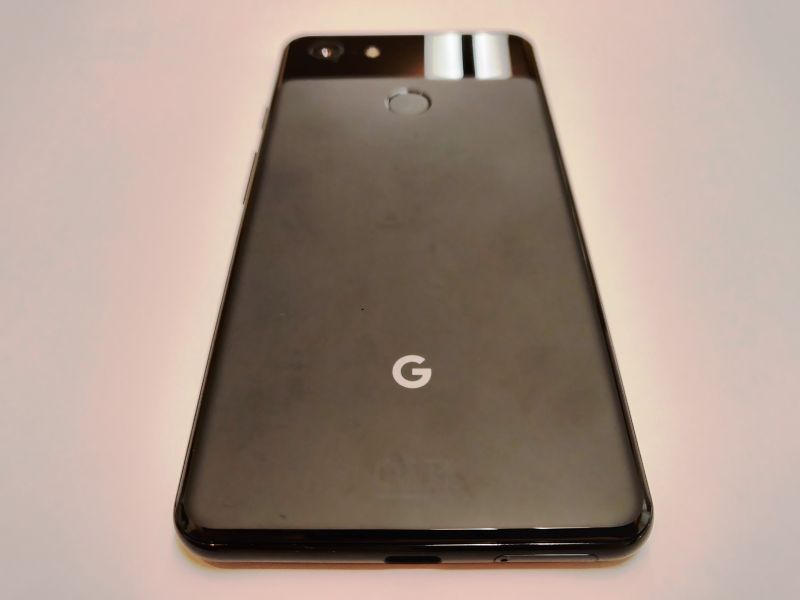 As with every Google flagship device of the past, the Pixel 3 XL is certainly a very exciting Android smartphone. The design may be highly polarising for the XL model, especially for those who care about aesthetics. For these consumers, the smaller Pixel 3 could be a better bet as it offers almost all the same features in a more conventional design. However, for power users, the Pixel 3 XL is easily one of the smartest phones you can buy. Even after spending only a few moments with the device, it seems to be one of the best camera smartphones money can fetch you today. It’s a substantial upgrade over the last year’s model and we can’t wait to put it through its pace over the next few weeks. If you have made up your mind for putting your money on the Pixel 3 or the Pixel 3 XL, you certainly won’t be disappointed.

As for the performance, we are yet to witness the 2018 Pixel flagship in full potential. The device will slowly open up to its pros and cons once we start using it as our daily runner. After we fill her up with our essential apps and data, the phone will finally run with the full load and we shall be able to give a final verdict on the Pixel 3 XL. Till then, this was our first-hand impression with the Pixel. Stay tuned for our final extensive review on the 3 XL ahead.