The other images of the patent reveal that Samsung is also planning to introduce the 'Gesture'-based navigation in its UI with the same partially embedded sensor in the screen. (Photo: LetsGoDigital)

This year, we are already used to seeing innovative ways to unlock your smartphone. Ever since Apple had axed the fingerprint sensor (Touch ID) on the iPhone X, it made a path for its contemporaries to deal with a new way of unlocking the smartphones. Whether it might be ditching the fingerprint sensor completely or changing its access from the rear to under the screen on the front, the change appears to be real. After Apple, Vivo managed to alter its fingerprint scanner approach by placing it under the screen, naming it as in-screen fingerprint scanner with its Vivo Apex and X21 smartphones.

Now Samsung seems to be joining this bandwagon with the similar kind of approach and yet appears to be different. A new patent reveals Samsung working on a fingerprint scanner on the front of the smartphone, where the fingerprint sensor appears to be partially embedded into the screen instead of entirely into the screen. The images showcase the sensor embedded into the chin of the phone partially and the rest of it integrated into the display. This suggests that Samsung is attempting to keep its recently increased screen-to-body-ratio screen as it is and still integrate a fingerprint sensor under the display.

The patent also implies the upcoming Galaxy S10  in early 2019 might be featuring this new fingerprint sensor, whereas the Note 9, which is to be released in a couple of months might stick to the standard fingerprint scanner on the back. 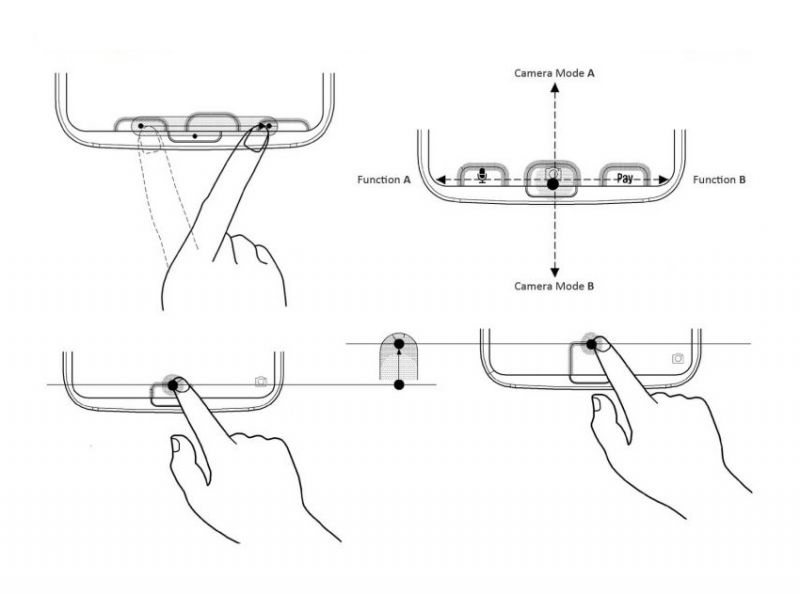 Moreover, the other images of the patent reveal that Samsung is also gearing up to introduce the 'Gesture'-based navigation in its UI with the same partially embedded sensor in the screen. The same embedded sensor might also act as the dedicated home button as well, according to the patent images. The same sensor could also be used for navigating across the UI as well. Do note that gesture-based navigation has already been introduced in the upcoming Android P, which will most likely run on future Galaxy S10 out-of-the-box.

As reported by Softpedia, the patent also indicates that Samsung could achieve a screen-to-body ratio of nearly 90 per cent using this approach, up from 84.2 per cent on the Samsung Galaxy S9.

Traditionally, every patent doesn't always come to life but the current evolving fingerprint scanners positions on the smartphones certainly makes this patent becoming true for the upcoming Galaxy S10 early next year.