The display size of the Galaxy S10+ is said to be 6.4-inches and it should feature an ultrasonic in-display fingerprint sensor.

Over the last couple of days, there has been a lot of leaks regarding Samsung’s upcoming flagship handset — the Galaxy S10+. 91Mobiles has gained access to CAD renders of the handset and from it, we can glean quite a few of its attributes.

The Samsung Galaxy S10 has recently demoed a 5G prototype version of the smartphone even though its supposed to launch a month later, in March after the 4G handset gets announced. This shows that Samsung is further along in the development of the 5G version of the Galaxy S10 than previously believed.

As for the CAD-based renders acquired by 91Mobiles and @OnLeaks; we can see a dual-selfie camera module in the top right of the display. This falls in line with the previous rumours that suggested that Samsung would have a camera cut-out in the display as opposed to a top bezel that’s present on the Galaxy S9. Another interesting feature we can see is the triple-camera setup on the rear that is aligned horizontally. This corroborates with the tons of leaks and rumours that have suggested that the flagship S10+ will sport three rear shooters.

The display size of the Galaxy S10+ is said to be 6.4-inches and it should feature an ultrasonic in-display fingerprint sensor. The handset is said to measure 157.5 x 75.0 x 7.8mm and will it will not forego the 3.5mm audio jack. 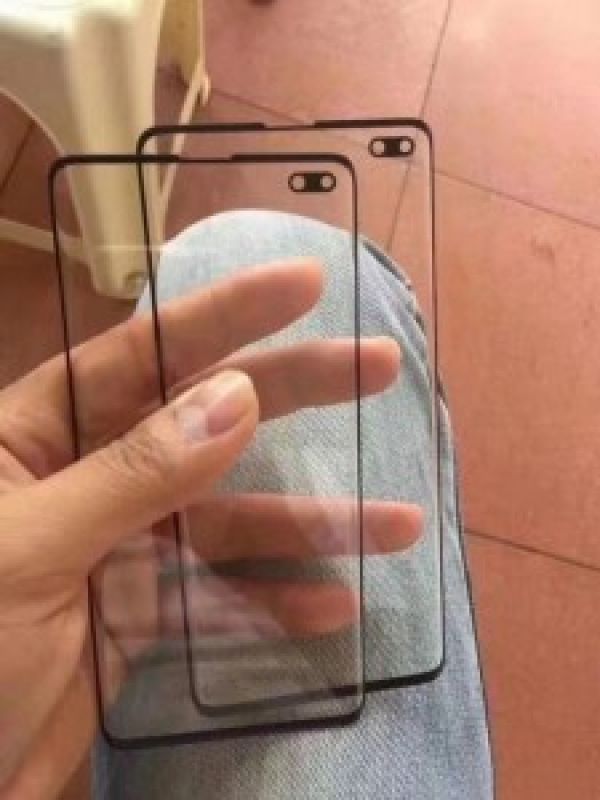 A new leak has surfaced showing the screen protector of the Galaxy S10+ and it falls in line with the CAD renders that surfaced.  @IceUniverse, the serial tipster has an incredible track record when it comes to Samsung leaks has shown off this screen guard and it too comes with the pill-shaped cut-out that is for the dual-selfie camera. As per a related report by GSMArena states, “@IceUniverse, a reliable source of unofficial Samsung info, posted Galaxy S10+ “protective film” – presumably a screen protector. It shows that the two camera modules stand some distance apart and there’s dead space between them. Add to that the unusable space above and to the right of the camera (even though there are screen pixels there), it looks like a pretty good chunk of the status bar will be unusable.”

As of now, these leaks are all pointing to one thing and that is the Samsung Galaxy S10+ is right around the corner and it appears that the design has been all but finalised.