Huawei’s sub-brand Honor has been dishing out some good phones in recent times. In our review of the top-of-their-line Honor 8 Pro, we rated the phone as one of the best phones under Rs 30,000, and then the Honor 9i grabbed our attention for its photography prowess in the midrange arena.

Honor 7X is the successor to the Honor 6X, which was launched earlier this year. It brings significant improvements in terms of a new display and camera quality. In fact, the Honor 7X grabs more specifications from the Honor 9i than the Honor 6X.

Switching from your old phone is a breeze with the Honor 7X. I switched from my daily driver, the venerable LG V20, and all the apps, contacts, messages and calendar entries, were imported in a matter of minutes — thanks to the Huawei clone app that ships as part of the operating system. Yes, as a safety measure, you still need to login into individual apps later, but at least the hassle of installing them one by one is taken away. There is also an option to import iOS content, should one be thinking of upgrading from an Apple device. 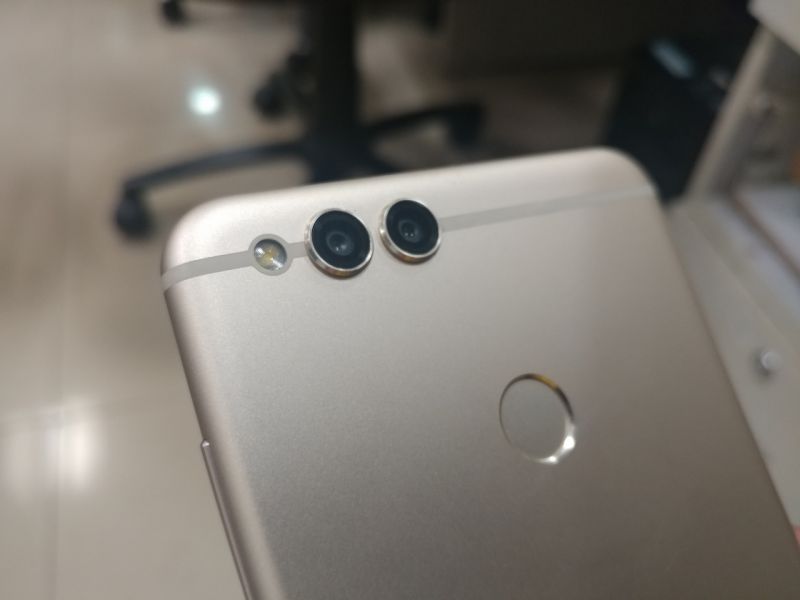 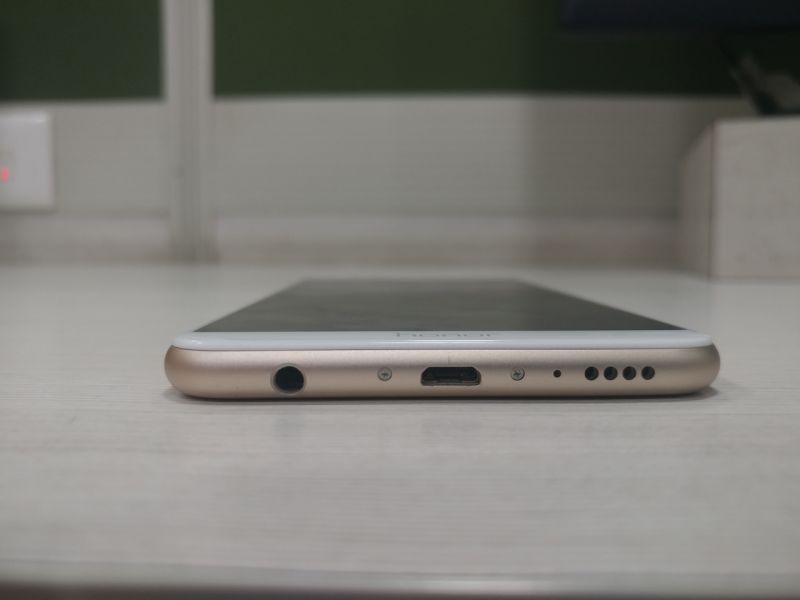 Aesthetically, the Honor 7X is a well-designed smartphone. It looks great —no second thoughts about it. We already had our office colleagues asking about the device the day it came in to our test labs. The significantly reduced bezels coupled with 18:9 aspect ratio keeps the device small in footprint, while still incorporates a larger 6-inch display. The display panel is wrapped around in an aluminium body, which is soft to the touch and easy enough for a single hand use. The rounded corners make the device ergonomically good too. However, the rear cameras slightly protrude out, which is slightly annoying and in time may result in scratched lens glasses. A protective case could help take care of this area.The fingerprint scanner is a different story altogether, its located on the rear and it just works. The speed of the sensor is outstanding; in fact, it is one of the fastest fingerprint scanners we have seen, and outperforms some of the flagship devices we own. 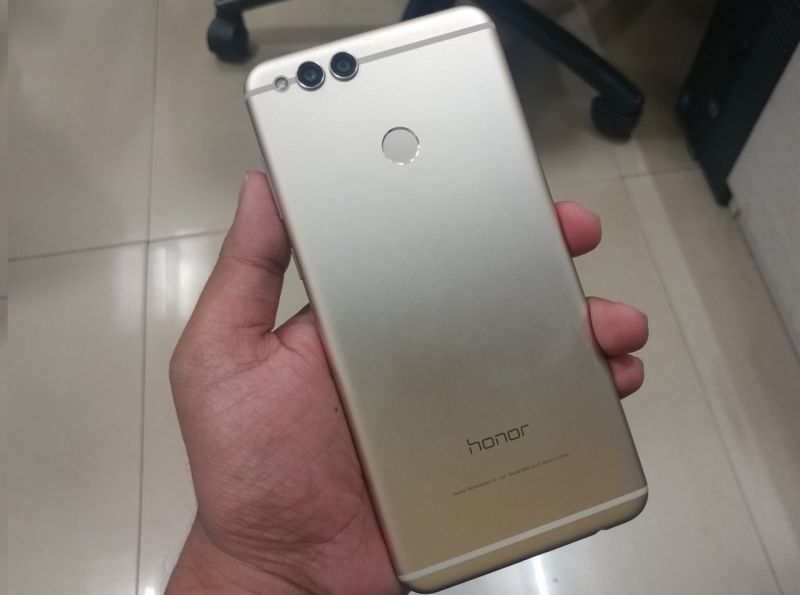 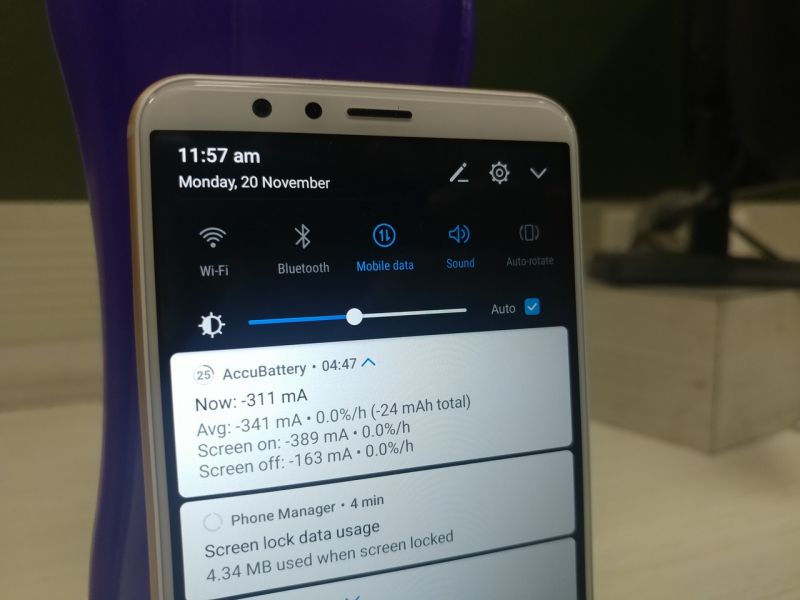 The 6-inch display is sharp — thanks to the full HD+ resolution on the 18:9 panel. Colours and white balance are slightly on the warmer side, but that can be easily adjusted from within the settings. Sunlight legibility and indoor brightness levels are good too. The Honor 7X uses a Low-Temperature PolySilicon (LTPS) IPS LCD display, which reduces power consumption and also helps keep the device's temperature lower as compared to a traditional LCD panel. It’s certainly an upgrade over the Honor 9i, which uses a similarly sized display sans the LTPS technology. 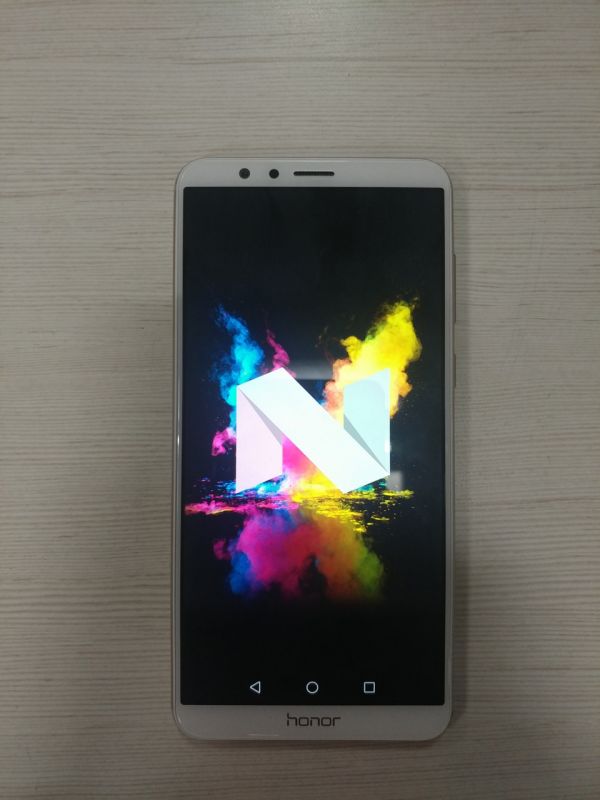 The camera plays an important aspect of any smartphone these days. The Honor 7X gets an upgrade to its rear sensor’s pixel count from Honor 6X’s 12MP to 16MP. It also features PDAF (Phase detection Auto-focus) and a single LED flash on the rear. The primary 16M camera is accompanied by a 2MP camera depth-sensing camera, which enables background subject isolation for those bokeh shots. The effect isn’t as good as the one seen on competitors, and leaves a lot to be desired in terms of overall image quality, which draws an uneven border around the subject and heavily blurs the surrounding area. The whole shot looks a bit artificially produced. But what's good about the portrait (bokeh) mode is the fact that it shoots multiple pictures with variable focus points, which you can change/choose post-capture, — great for flexibility. There are several other options in the camera such as beauty mode and moving photos (similar to live photos) along with pro mode (manual controls). 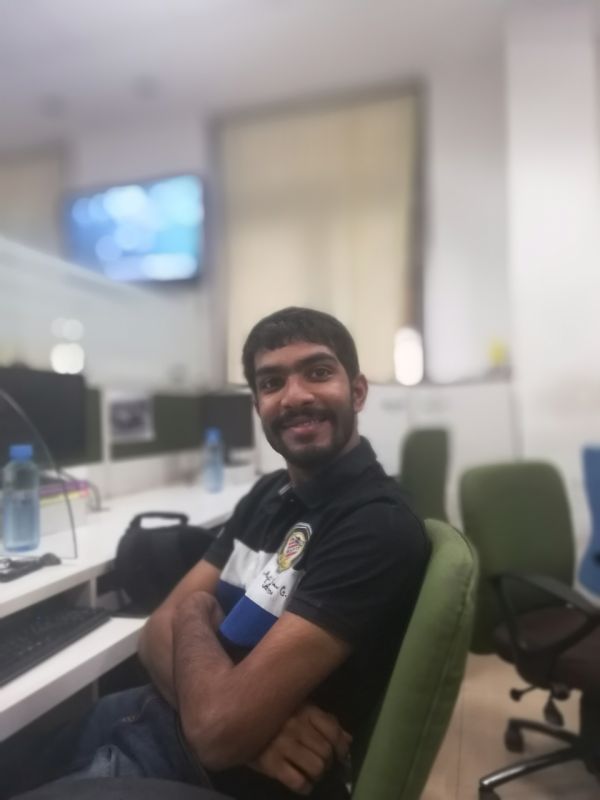 Talking about the manual controls, the phone offers manual adjustments for both images and videos; you can change values from focus, ISO, white balance, exposure and shutter speed (only for photos). There is also a dedicated HDR mode buried in settings, we would have liked if there was a toggle for the HDR in the main camera UI itself. The camera also supports panorama mode which captures a detailed landscape, a slightly gimmicky Light Painting mode which lets you capture moving cars, flowing water and fireworks in an artistic manner and obligatory slow motion and time-lapse modes along with a bunch of filters. There is also an option to download other modes for scanning documents, capturing food and watermarking the images. 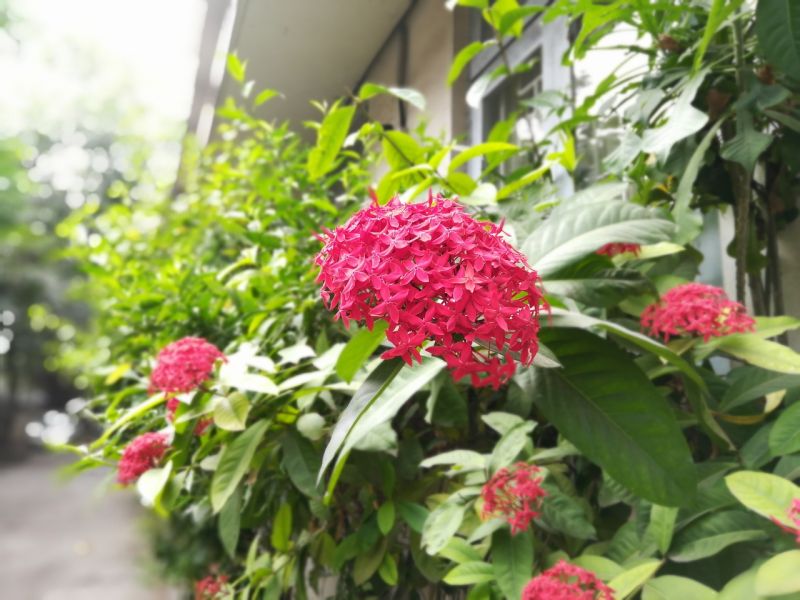 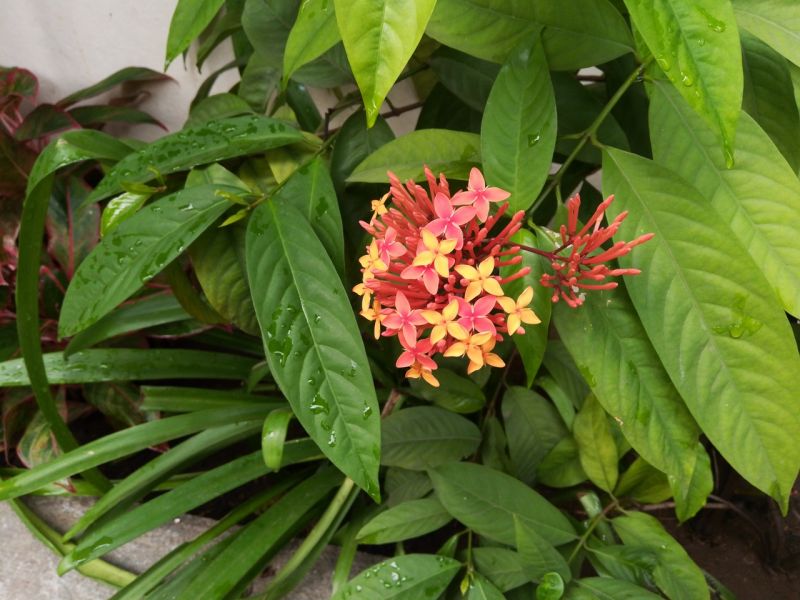 As far as quality is concerned, the images captured with the Honor 7X record plenty of details in broad daylight. In auto mode, the colors look slightly saturated and there are signs of over-sharpening, but the overall image quality is very good. The focus locks on to the subject pretty quickly and shutter lag is minimal. On the other hand, low light performance is decent, if not spectacular, and gets the job done.

The flash module on the Honor 7X is quite powerful for macro shots. However, one peculiar thing we noted was the inability to use flash in the camera, once the battery hits lower than 15 per cent. Though this feature has been noted in many other smartphones, having the option to override the use manually would have been appreciated.

On the selfie front, the 8MP shooter is above average and captures selfies with a decent amount of detail. However, we noticed that it overexposes the subject and struggles against a direct light source. It’s certainly not as good as the 13MP+2MP shooter featured on the Honor 9i. 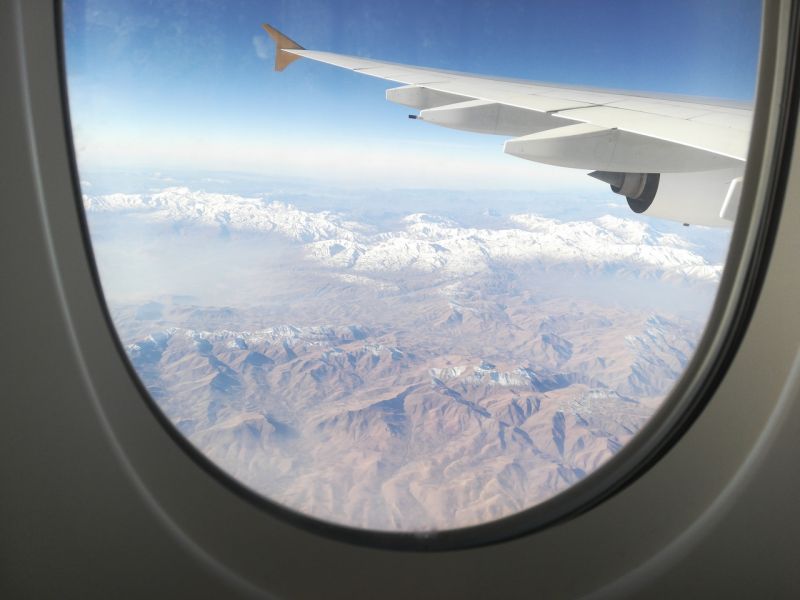 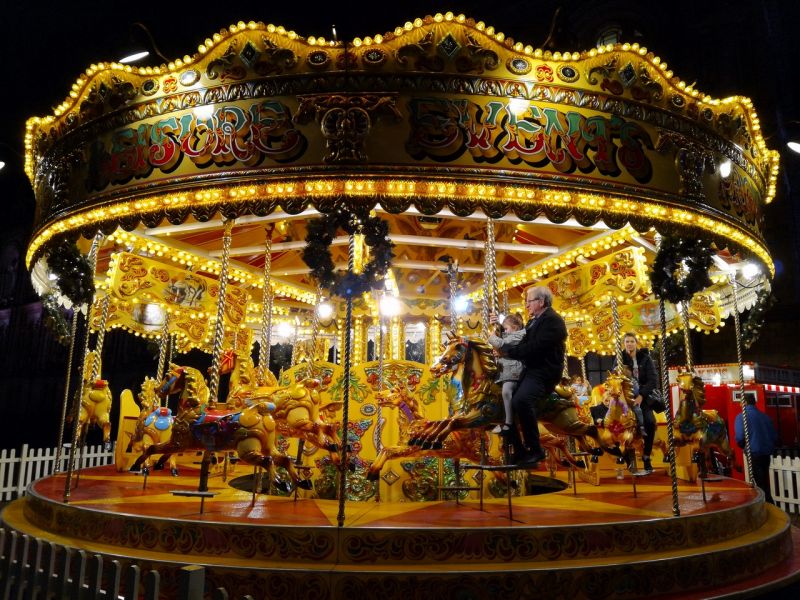 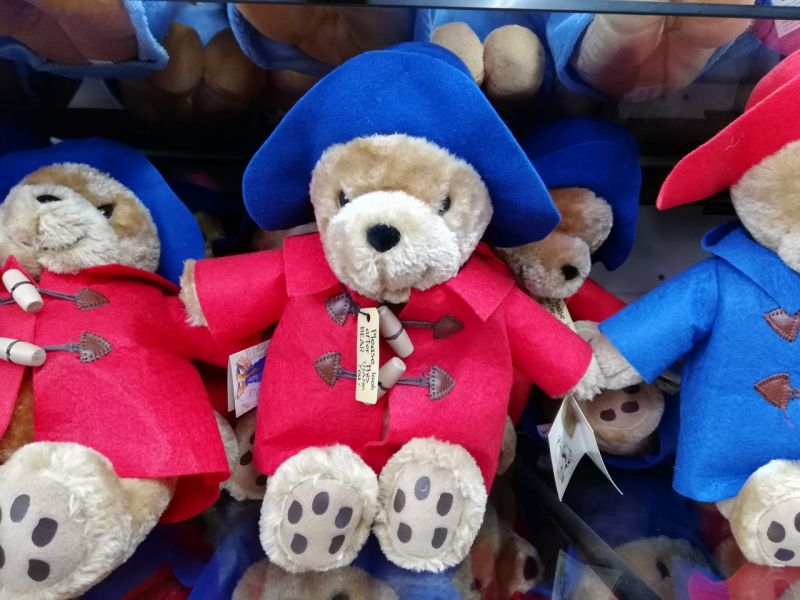 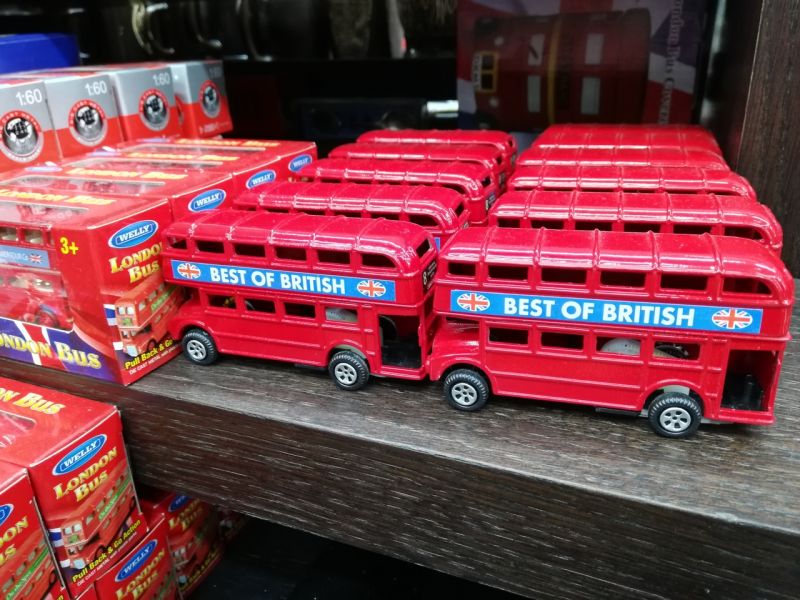 Under the hood, the Honor 7X is powered by the latest from Huawei's chipset stable. A mid-level Kirin chip, the 659, powers the device with an octa-core 16nm processor, along with 3GB/4GB of RAM and 32/64 GB of expandable storage.

Honor 7X ships with Android 7.0 Nougat based on EMUI 5.1. This is a shame since Android 8.0 Oreo is out for months and the phone certainly seems capable enough to run it. EMUI 5.1 is not the latest version of the custom overlay powering Huawei/Honor devices though. The flagship Mate devices from Huawei are seen running the EMUI 8.0 variant.

However, The EMUI 5.1 is lightweight, smooth and fluid, and we didn’t experience any major lags with the device during our tests. It may not have some of the extravagant features the others may have to offer, it actually helps make the phone perform faster. The UI has most of the Android basics covered well and retains Nougat features like split-screen multitasking. However, while playing some heavy games such as Injustice, the phone experienced dropped frame rates and ran a bit warm.

The phone is juiced by a 3340mAh battery, which easily lasted us a day with moderate usage. Sadly, the phone doesn’t support fast charging, which is a bit of a disappointment. However, There is a cool feature which warns users when an app is draining abnormal amount of power.

Honor 7X has also some extremely useful features such as app cloning and . The app cloning allows you to run two accounts of the popular apps such as WhatsApp and Facebook simultaneously. , on the other hand, allows you to share the Wi-Fi connection with multiple devices without disclosing login credentials of that particular network. It’s an extremely nifty feature in certain scenarios. For instance, in some hotels, the Wi-Fi network is restricted to one device per room. With Honor 7X, you can bypass this restriction by sharing the same Wi-Fi network with up to 4 other devices.

Additional useful features include a blue light filter, screen video recording and iOS-like news aggregator on home-screen. Honor has missed out on water or dust resistance with this one, but the phone at least retains the much appreciated 3.5mm audio jack.

At the end, we couldn’t help but notice that Honor 7X is almost identical to the prevalent Honor 9i. However, Honor has priced the 7X very aggressively with the 32GB/3GB variant priced at Rs 12,999, while the 64GB/4GB version going for Rs 15,999. To put this into perspective the Honor 9i with 64GB/4GB is available for 17,999. In comparison, the Honor 7X flaunts a better design along with a superior LTPS display, whereas the Honor 9i boasts of a better selfie camera. Competition outside Honor includes devices such as Moto G5 Plus, Xiaomi A1 and Vivo V5 but the Honor is one compelling device which can give the aforesaid devices a run for their money. It’s got a strong build, decent camera, a beautiful display and snappy performance. This one is worth a serious look if you are looking for a new mid-range smartphone.