Google will bring in a new pink colour, expected to be called ‘Sand’, on the Pixel 3 series.

The Pixel 3 has been one of the most hyped smartphones for this year, beating even the new iPhone XS and iPhone XR in terms of hype. The hype isn’t because of whether Google is planning revolutionary improvements in this year’s flagship, but rather on the fact whether the leaked photos and videos depict the actual Pixel 3 or not. It’s expected that Google could maybe surprise us with a completely different smartphone when compared to the leaked concept.

However, clear renders of the already seen concepts have popped up on the Internet once again, showing us the same device whose prototypes have been flooding the Internet for a few months now. Android Headlines has got access to official renders of the Pixel 3 and Pixel 3 XL, unveiling what all colours could the new Pixel come painted in.

For starters, Google will bring in a new pink colour, expected to be called ‘Sand’, on the Pixel 3 series. The standard white and black colours will make a comeback too. In fact, most of the design elements seen on last year’s Pixel 2. The rear panel retains the fingerprint sensor and a single rear camera sensor. The Pixel signature dual tone glass-metal finish also exists. The edges have only been curved slightly this time to make it a little different. 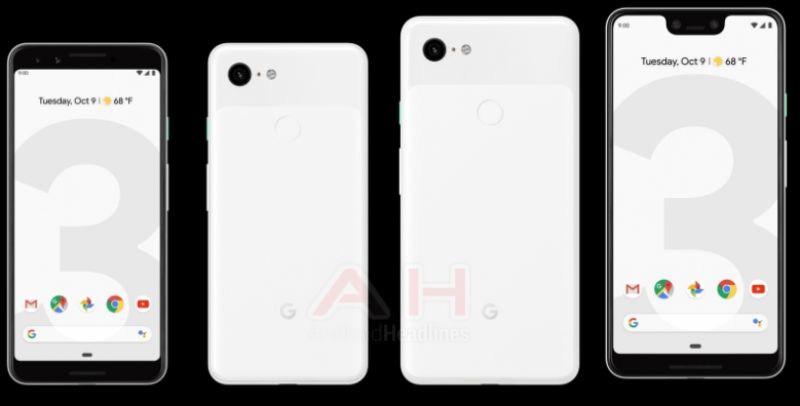 Sadly, in the front, it’s nothing revolutionary. On the XL, there’s a huge notch sitting on the front with a thick chin, both housing a stereo speaker setup and dual front camera setup. The standard Pixel 3 will flaunt the Pixel 2 XL’s design, albeit with slightly bigger bezels.

With the launch date so close, it will be worthless to hope a different design on the Pixel 3 series. Nonetheless, Google could unravel new mysteries on October 9th, which makes it worthwhile to wait for the vent patiently.