Big hoax: 'How to send WhatsApp messages without Internet'

The message on WhatsApp reads that your device supports ultra-light Wi-Fi technology and you won’t need an internet or data connection to run WhatsApp anymore.

A new message on WhatsApp reads that your device supports ultra-light Wi-Fi technology and you won’t need an internet or data connection to run WhatsApp anymore.

Well, if you have read this message before, you know what we are talking about. If you haven’t, then you should know that this fake message is nothing but a cam by some malware developers.

Welcome to the world of scammers, where you probably won’t need a virus or a malware anymore. All you need is a little intelligent thinking and some great words to trap those who are ignorant with new technology.

Gone are the days where a virus was meant to steal your data. Today, your private data may be important, but getting past the encryption of modern operating systems and software is difficult, but not impossible. And after hours of planning and developing codes that can break through your smartphone’s security, the hacker just gets some junk photos and useless phone numbers that probably won’t fetch him much in the black market. So what does he do? Simple—he makes you click on advertisements, make you make your friends click on advertisements, makes them do the same too and in return, earns big money from the ads themselves. No data stolen, but simple tricks to make people click on ads.

This is not a new trick in the hacker/scamsters book—it has been used for a while, but it still is pretty much successful. There are hundreds of messages which inform users that they are getting free money, free data or some free stuff, creating a huge curiosity. This leads the user to click on the message, which takes him through a series of pages which has advertisements. Clicking on each advertisement and page earns the hacker gain money from ad companies. He then makes you think that the message and the webpage are genuine by scraping the entire content from the original website. He then makes you click on a series of check boxes, enter your personal details and then pass the message on to a series of friends to become eligible to the offer. Lastly, to make sure you are a human and not a robot who is accepting the offer, he also makes you download a few apps and register to the said services. Once done, he says you will be able to get the offer. 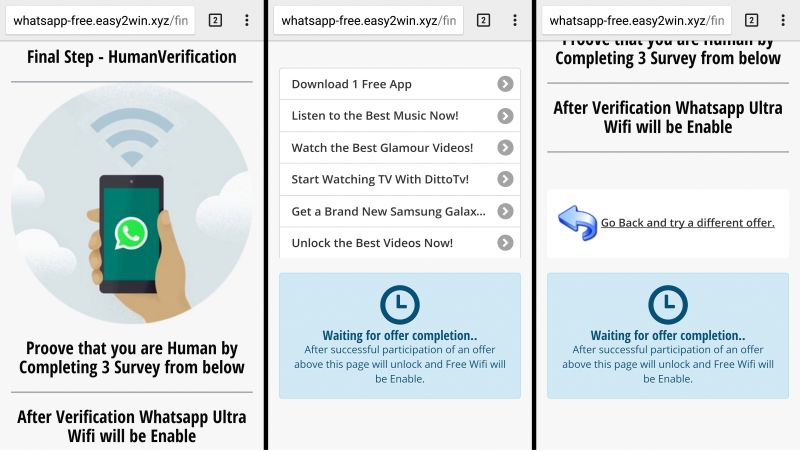 In the bargain, he made you click on various advertisements and also made a copy of your personal information that ‘you’ gave him. He then also made you share the invitation to friends (who will witness the same treatment) who will think it is genuine as it came from a close ‘friend’. Lastly, he also made you swift through some pages and download a few apps which could be a bonus for him if they too contain a malware.

A similar fake message about enabling WhatsApp Calling was doing its rounds recently. That was the time when WhatsApp was testing the calling feature and you needed to be invited to get the voice calling enabled on your app.

Now the scene is a little different, but the scam is similar. Many don’t know what Facebook’s Free Basics is all about. Some even think that Mark Zuckerberg announced that the basic internet will be completely free to most people around the world. So using the internet for email, WhatsApp and similar serviced won’t be charged. But the scheme is yet to see light of day in India. Taking Facebook’s Free Basics planning into consideration, hackers are milking on the issue. You must know that Free Basics has been banned (for now) in India as net neutrality is a strong debate that is still a big controversy. So, free internet is still a myth in India; unless you are ripping off someone else’s data plan by using their Wi-Fi network.

About the new WhatsApp message scam, you should beware about the recent rounds it is taking. The new scam is an invitation to an internet-free WhatsApp messaging platform. The invitation comes in from a friend as a simple message on your WhatsApp with a link on it.

The message reads, ‘Now,You can do Whatsapp Without Internet From Today. Whatsapp launches Ultra-Light Wifi Feature to Enjoy Free 3G Internet wherever you go for whatsapp application,Click On Below Link to Activate Now - http://is.gd/Free_Wifi_For_Whatsapp’ 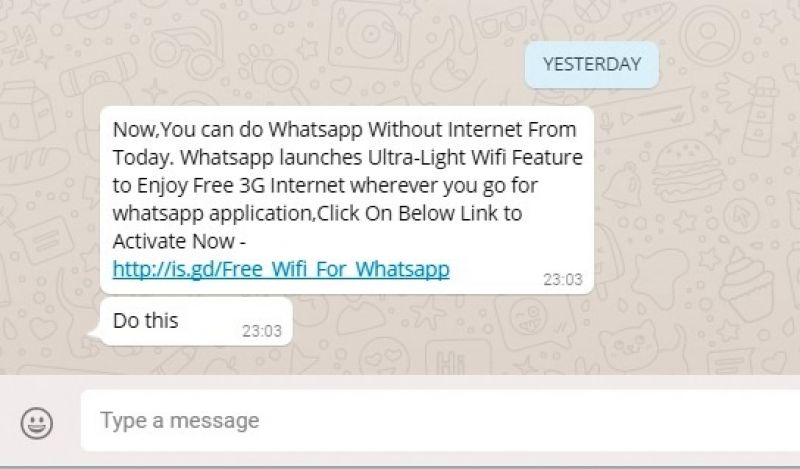 You will find the message genuine since it has come from a known source. Well, that dear friend was also fooled into the same scam and hence you got the message from him.

Clicking on the message will take you to a webpage (http://whatsapp-free.easy2win.xyz) which stated that your device supports ‘ultra-light’ Wi-fi technology and you can get free internet from the technology after you invite 15 friends for it.

The message on the page further mentions that after you have finished inviting 15 friends you will find that the WhatsApp colour will turn blue (from green) when the service is activated.

When you are connected to the ‘ultra-light Wi-Fi connection’, you are supposed to get ‘open internet with unlimited access’, ‘free multimedia sharing, audio-video-photo-etc’, and ‘unlimited group chat’, with ‘real time texting’ 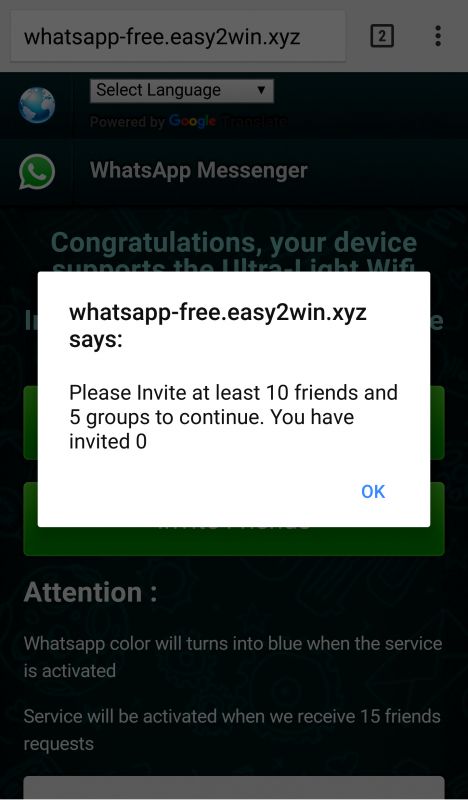 Sadly, everyone who ever used WhatsApp for a while knows what is free and what is not.

ALSO READ: Facebook and WhatsApp will not work on this phone from April

On the page there are a few social icons that should take ‘supposedly’ you to the WhatsApp social pages. Clicking on the Google+ icon takes you to your own page, and the Twitter icon links to WhatsApp’s twitter page. The Facebook link takes you to a scam website that can steal your Facebook details such as personal information, login passwords, etc. (Check the screenshot below).

WhatsApp never sends out any such invitation, not it will hold any such schemes where the internet will be completely free. The internet comes from your telecom company or Internet Service Provider, and it definitely not for free. Unless the app company ties up with the service provider to give you free internet on his app, you won’t enjoy anything for free. Not at least the net neutrality issue is solved.

Also read:  How to use two WhatsApp accounts on your smartphone with one app

Till then, make sure you don’t click on anything suspicious that arrives from your friends on chat and email. Also make sure you are not part of spreading such information.