A stylish gradiant design on the OPPO K1.
Rating:

With 2019 well underway, a common trend we see are smartphones with premium features moving down to the budget/midrange category. This year we have seen handsets from Chinese vendors reducing the size of the notch and launching them at a price that was previously unimaginable.

The recently launched OPPO K1 is one such handset that boasts premium features but doesn’t come with a premium price tag. The handset comes loaded with some incredible attributes that were previously found on handsets in the upper Rs 30K price segment but with this handset, OPPO shows that it can feature on devices in the sub Rs 17K price point as well. The OPPO K1 comes with several interesting features but the highlight is definitely the in-display fingerprint scanner. With this feature in tow, the OPPO K1 shows that you don’t have to break the bank for high-end features.

With the OPPO K1, the brand has paid a lot of attention to what the current smartphone design trends are and launched a product that features a gradient back The handset comes in two colour variations — Astral Blue and Piano Black and in for a review is the former. Similar to most smartphones from Chinese manufacturers, this one too features a gradient rear and with the K1 we get a Blue tone that shifts to a Purple hue. This may be off-putting for some but we find that with the brand using this colour scheme, it can be rather appealing to either gender. 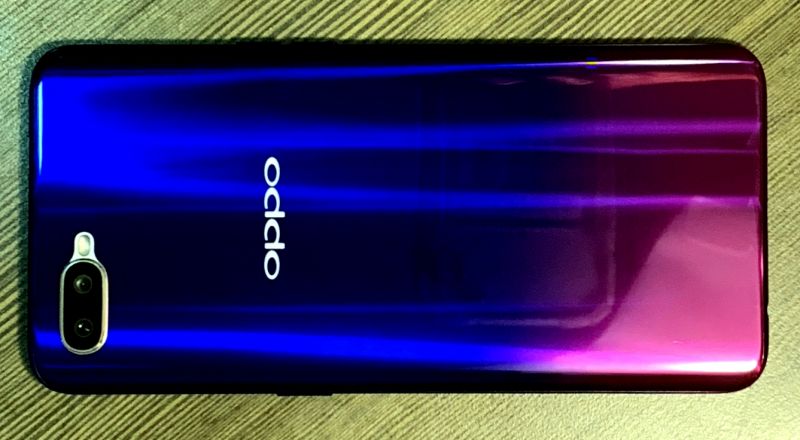 The clean finish at the back is achieved because OPPO has used an in-display fingerprint sensor. Hence, apart from the branding, the only other characteristic found at the back is an iPhone 7-esque dual-camera setup with an LED that features gold accents. This helps in enhancing the looks and its these small nuances that we find appreciable.

Unlike most Android smartphones available, the buttons are located on both sides with the volume rockers positioned on the right and the power button located on the left; this reminds us of its Apple counterpart. And this is where all the similarities between the iPhone and the OPPO K1 end. Apart from this, we find the speaker grille, the micro USB charging port, the mic and the 3.5mm audio jack located at the bottom. The volume rockers and SIM tray are on the right. The SIM tray allows two SIM cards and a microSD card too for storage expansion of up to 256GB while having two active SIM cards simultaneously. Lastly, a micro USB port in lieu of a Type-C port to probably cut down costs as well as keep the old compatibility alive. 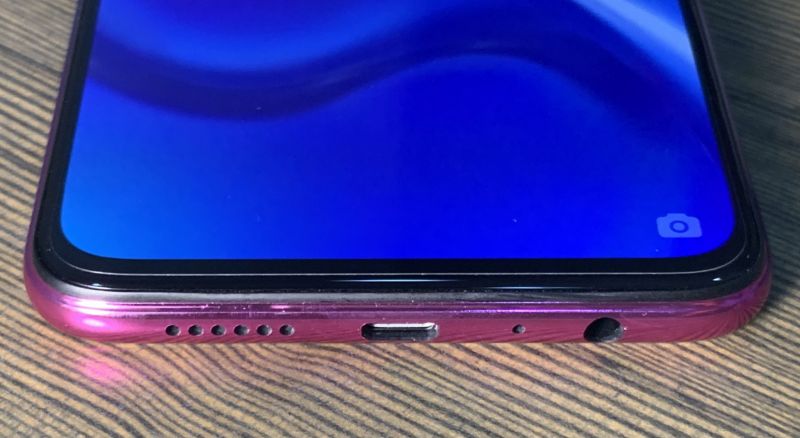 The OPPO K1 uses a 6.4-inch FHD+ AMOLED display that’s protected by Gorilla Glass 5 and features a resolution of 1080 x 2340 pixels. Having a waterdrop notch, the display features a 19:5:9 aspect ratio and pixel density of 402ppi. Since the handset utilises an in-display fingerprint scanner as its primary mode of biometric authentication, the K1 is one of the first handsets in this price range to feature an AMOLED display. Since it is a major step up from LCD panels, naturally we get colours that are vibrant and rich blacks. Colours don’t appear washed out and the overall reproduction is great. The colour temperature can be tweaked in the settings to cooler or warmer; however, we found that the default colour temperature provided the best results for us.

Moving on, the bezels are pretty slim and the chin isn’t as large as handsets seen in the recent past. However, what the handset lacks is an LED notification indicator. Honor managed to fit this feature on the chin, but no such luck with the K1.

To wrap up this section of the review; the display is one of the strongest aspects of the handset and OPPO is paving the way for handsets in this price range to feature premium displays.

The OPPO K1 features ColorOS 5.2 that’s based on1 Android 8.1 Oreo. This skin helps in providing a new interface from the Home page to app icons and from font sizes to background colours. This helps with high customisation. With the K1 you get a fair share of bloatware, some of which can be uninstalled and others which are unfortunately stuck for life.

Some notable apps include Smart Scan and ORoaming. With Smart Scan you can translate text from photos directly, and this app also manages without an active internet connection. This makes translating text in foreign countries completely doable without the reliance on a data plan. For ORoaming, OPPO helps in producing a virtual SIM card on your phone where you pay a fee for data services. With this app, you don’t need to have a local SIM card and you pay by the day or by the week and depend on how much data you require. For example, the 500MB Europe Bundle costs USD 6.70 for 7 days and a per day bundle costs USD 4.70. The largest packages come for 1GB per week and they cover most tourist destinations.

The OPPO K1 is powered by a Qualcomm Snapdragon 660 SoC that’s paired with 4GB of RAM and 64GB of onboard storage with this being the only configuration it is available in. In terms of day-to-day performances, the device manages to handle everything thrown at it with ease.

When it comes to handling heavy games, the handset performs optimally when the in-game settings are set to medium. While playing games like Asphalt 9: Legends and PUBG Mobile, the device performed best at the medium settings. What also needs to be mentioned is that the device does not overheat even during long gaming sessions.

The in-display fingerprint sensor isn’t the fastest we have seen and the Face Unlock feature takes over making it the go-to option for us unlocking the phone. A problem we had with the in-display sensor was that it took almost a second to unlock the handset. And even when it did, we had to place our finger accurately on the sensor and apply slight pressure too. While it’s great that OPPO has added this feature in a mid-range device, in 2019, we would have liked to see it work instantaneously. 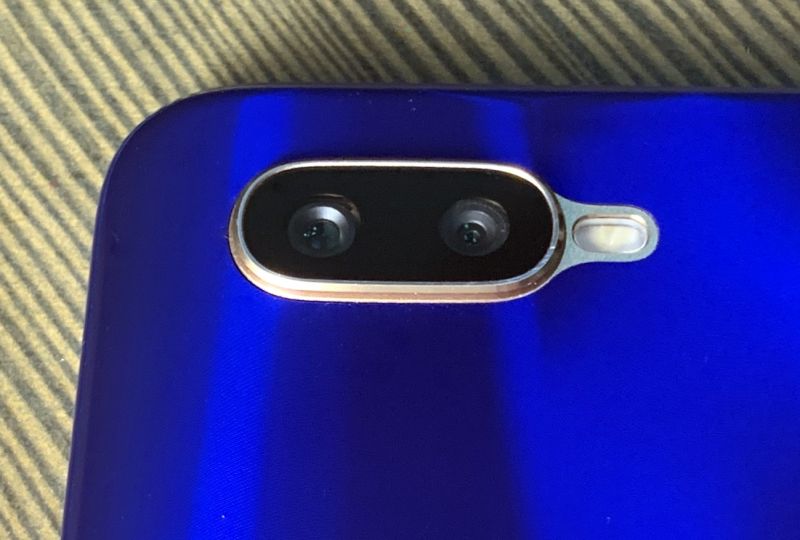 Smartphone manufacturers are paying close attention to camera optics in this crowded budget segment with most of the handsets coming with AI-enabled shooters. The OPPO K1 is no different  — onboard is a 16MP primary sensor with an aperture value of F/1.8 alongside a 2MP depth sensor with an F/2.4 aperture. 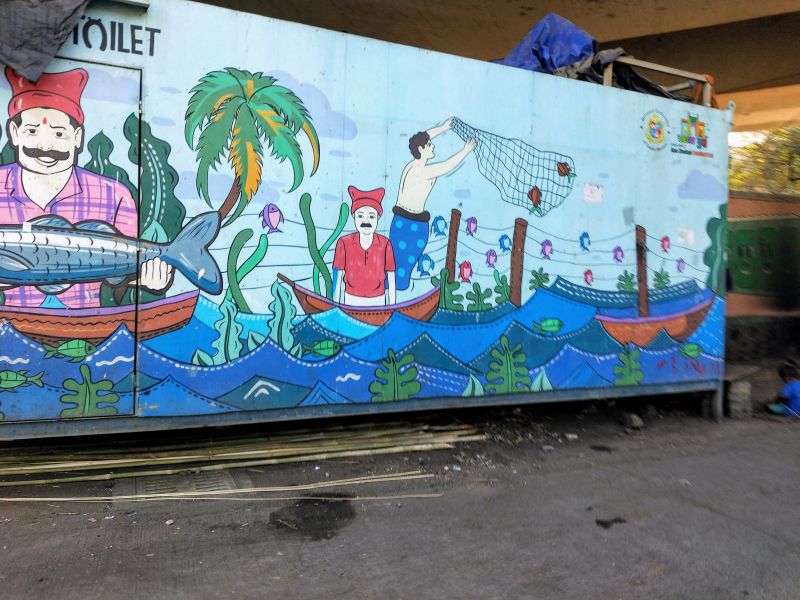 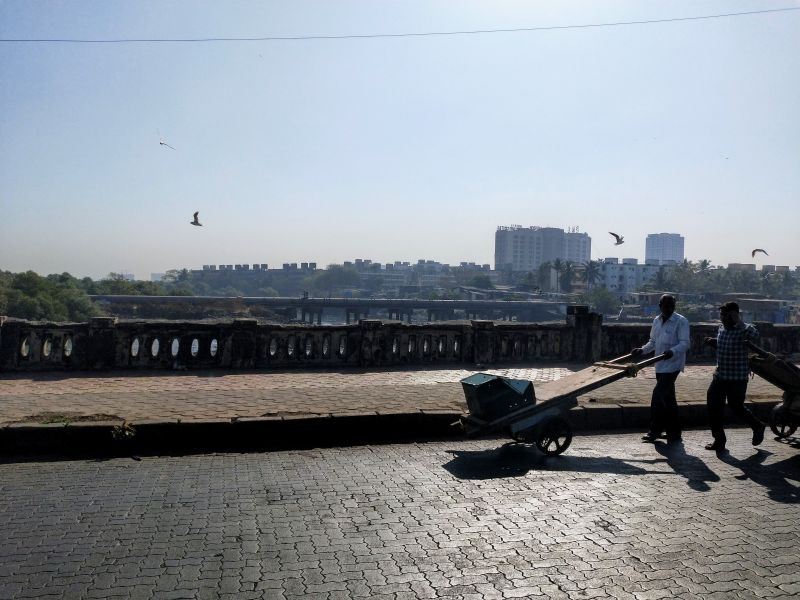 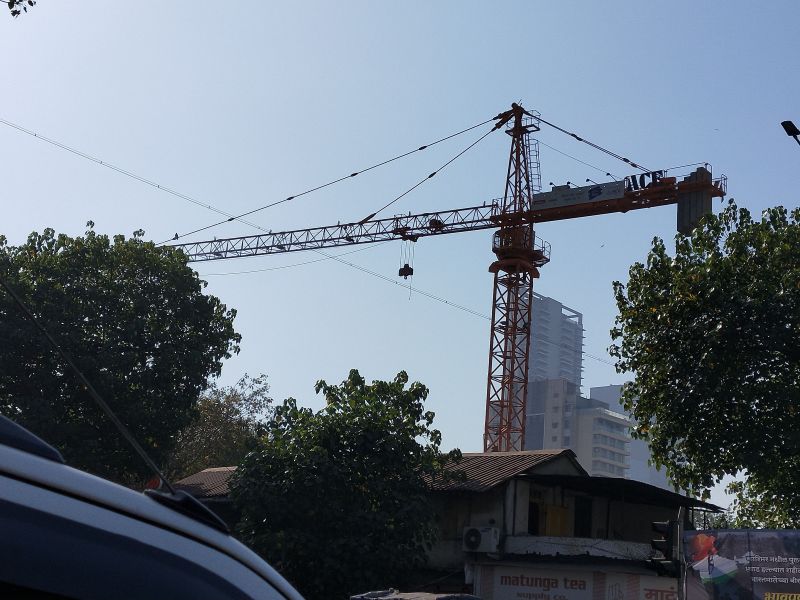 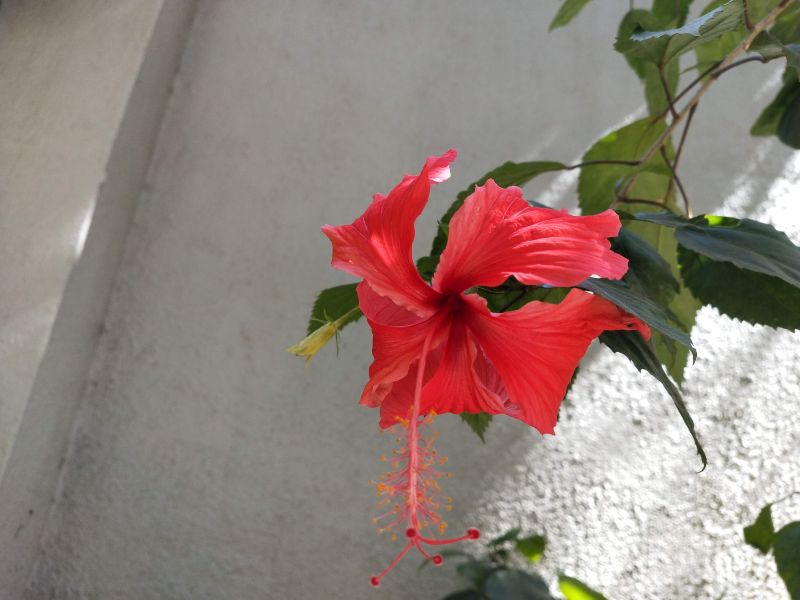 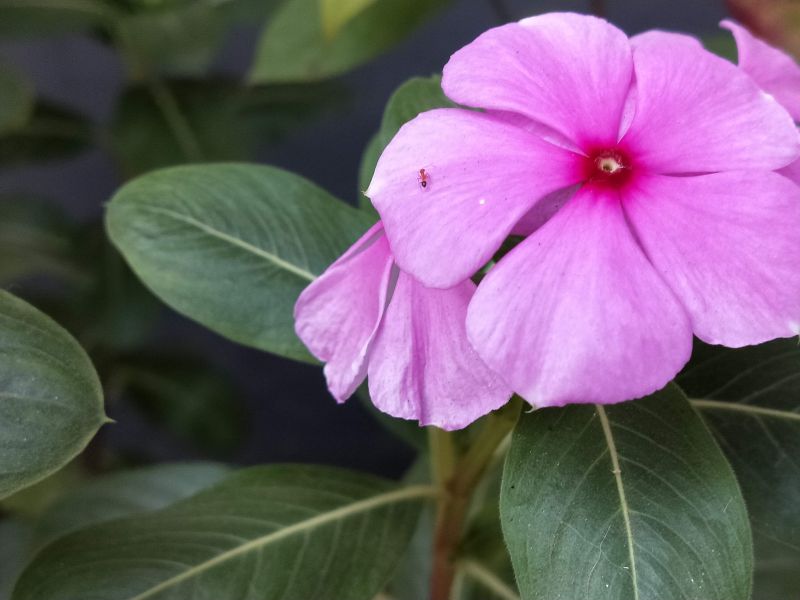 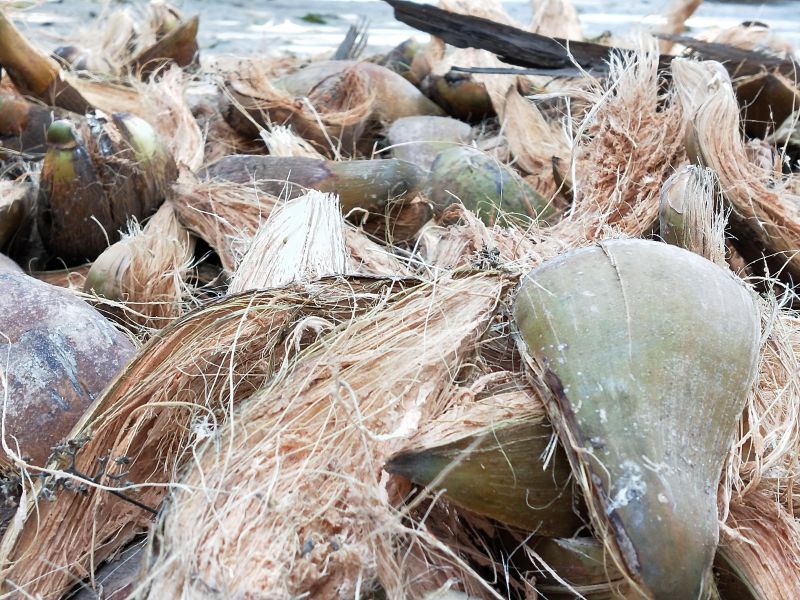 To start off, the camera app is pretty basic and a no-brainer. Below the shutter button are different modes such as Photo, Video, Time-lapse, Portrait, Sticker, Pano and Expert. At the top bar, are different camera options such as HDR, Timer, Flash and Aspect ratio. Above the shutter button, we find the 2x digital zoom and AI beauty modes which may appeal to some.

In broad daylight, the camera captured images with a lot of detail and the overall colour reproduction was pretty great. There was no shutter lag noticed and while pressing the button several times in quick succession, there was no lag as seen in some smartphones in this price bracket. With the HDR mode enabled, we observed that there was a lot more detail visible. We recommend keeping this setting on for the best possible pictures. In low-light or indoor environments, the K1 performed surprisingly well with a fair amount of detail provided. The noise levels were also quite low making this a great all-rounder smartphone in this segment. 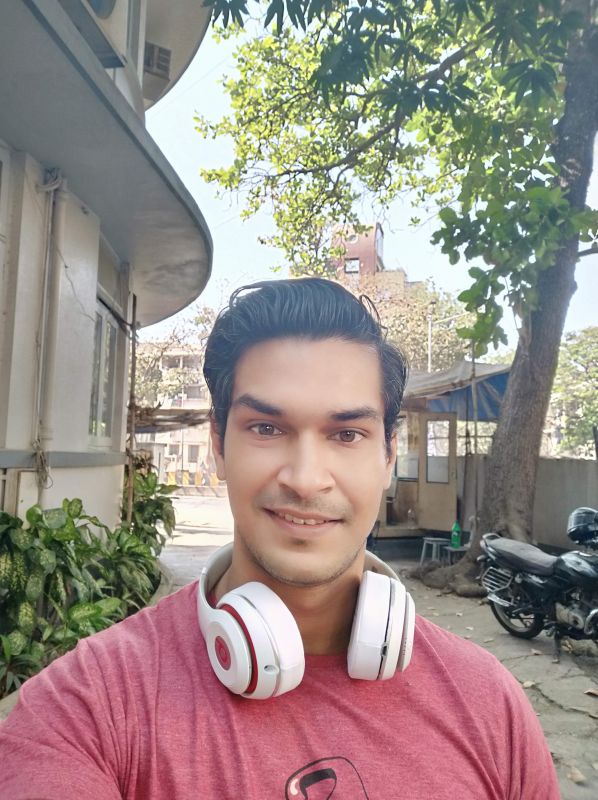 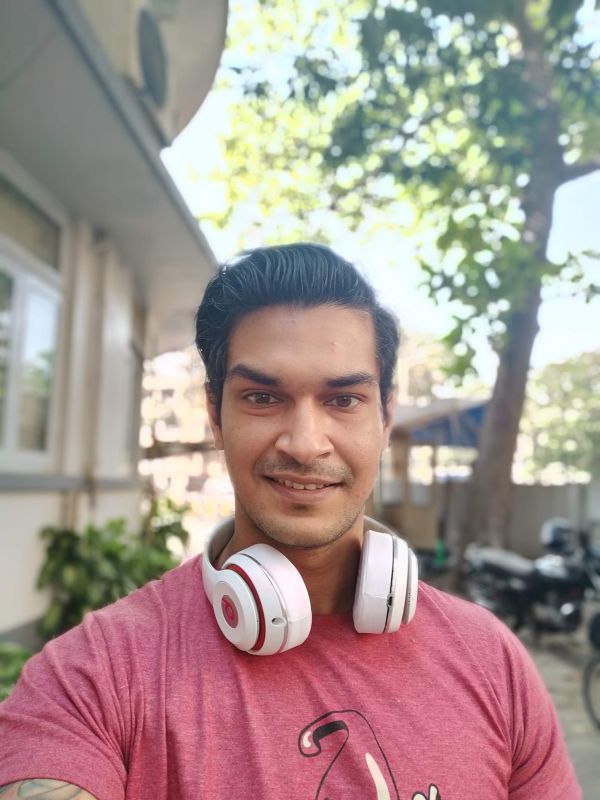 Selfies in daylight provide a lot of detail with skin tones appearing almost natural. With the AI Beauty mode turned on, it does the job of smoothening the blemishes. For a more natural look, we recommend turning this AI beauty mode off. In portrait mode, the edge detection is spot on, no complaints here.

Overall, the OPPO K1 has a camera that can rival handsets that costs significantly more.

The handset comes with a 3600mAh battery which is on par with handsets in this price bracket. While using it as our daily driver during the testing period, we observed that it managed to squeeze in a work day’s worth of usage which included some casual gaming, streaming music and movies as well as sending emails, IMs and a bit of social media. Also, the handset comes with a 10W charging brick which takes less than three hours to charge from zero to 100 per cent. 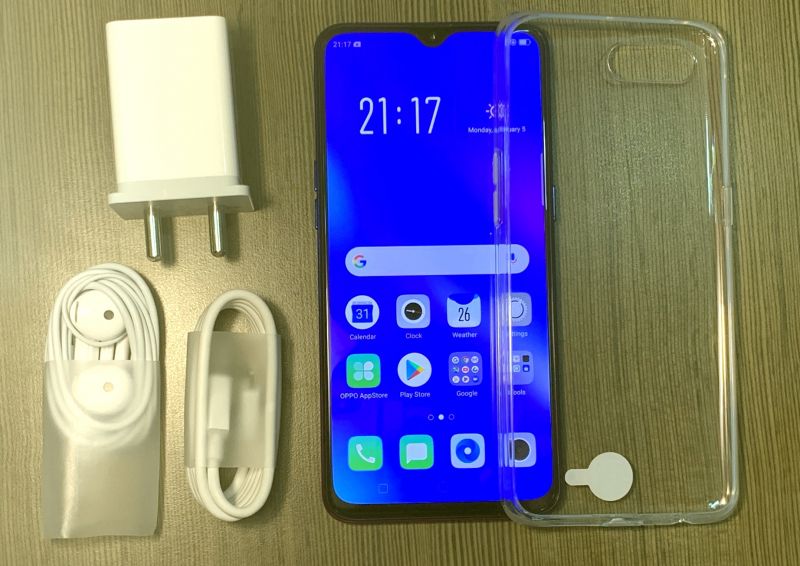 Priced at Rs 16,990, the OPPO K1 offers premium features such as an in-display fingerprint scanner, a rich AMOLED display and a premium gradient design all in a price point that was previously reserved for the Rs 25K smartphone category and above. The handset does have its drawbacks, chief of which being the painstakingly slow in-display fingerprint scanner. However, if you can ignore this, you get a handset with great cameras and a decent battery in a price bracket that blows away the competition.