The Tecno Spark Go was overall, a fun experience for us. A very lowly priced smartphone which was packed with features it sometimes was itself tipping over to execute.
Rating:

The Tecno Spark Go launched late last month, in the budget sector of Tecno’s wide range of smartphones. Accompanied by its slightly higher priced Spark Air 4 phone, it was priced at Rs 5,499.

Tecno, owned by Transsion and a sister concern of brands like Infinix, and itel, has made its presence felt in the lower-mid to budget range of phones. While the Tecno Spark Go clearly fit in the latter, the company has also released phones like the Tecno Camon i4 which was priced at almost double of the former.

The Tecno Spark Go was overall, a fun experience for us. A very lowly priced smartphone which was packed with features it sometimes was itself tipping over to execute.

The Tecno Spark Go has a sturdy design with an appreciable, 6.1-inch HD+ screen, more over it has a very light body mostly covered in plastic. A dot notch display, and a 19.5:9 aspect ratio, often content were a little off on its IPS LCD screen than we would have liked. It was also consistent under different lighting, as well as viewing angles. However, it did serve the purpose and was ultimately, a good fit for its price. As far as the display quality goes, the screen is pretty responsive and kudos to Tecno for not skimping on quality materials considering the market it is targeted at. 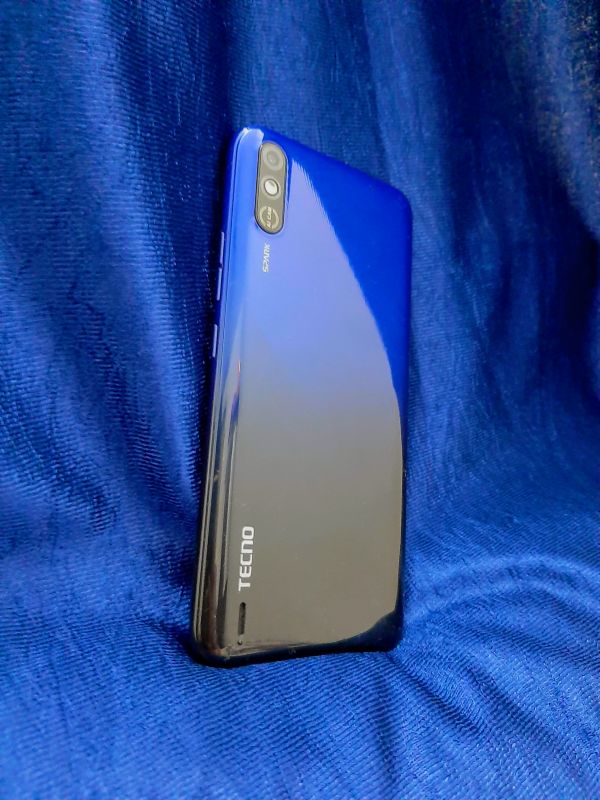 Unlike most handsets available in the market nowadays, the Tecno Spark Go comes  with a removable back. This is a throwback to smartphones of old and this design decision by Tecno is a well-calculated one as it provides easy SIM swapping. Towards the bottom there is a slit for the speaker grille, while smack at the lower side of the phone is a micro USB port and a 3.5 mm headphone jack. There are volume buttons and a power button on the side. The slots for the two SIM cards and the memory card are placed inside, below the removable back for this phone which has a removable battery, too. It’s available in two colours- Nebula Black and Royal Purple, out of which we had received and reviewed a handset in Nebula Black.

Featuring a glossy back, the handset retained a lot of fingerprint residue which was a drawback for its overall looks. Also, no protective case was bundled with it; so all the best in keeping your phone in pristine condition. Other than this, the handset was comfortable to handle even single-handedly due to its compact form factor. 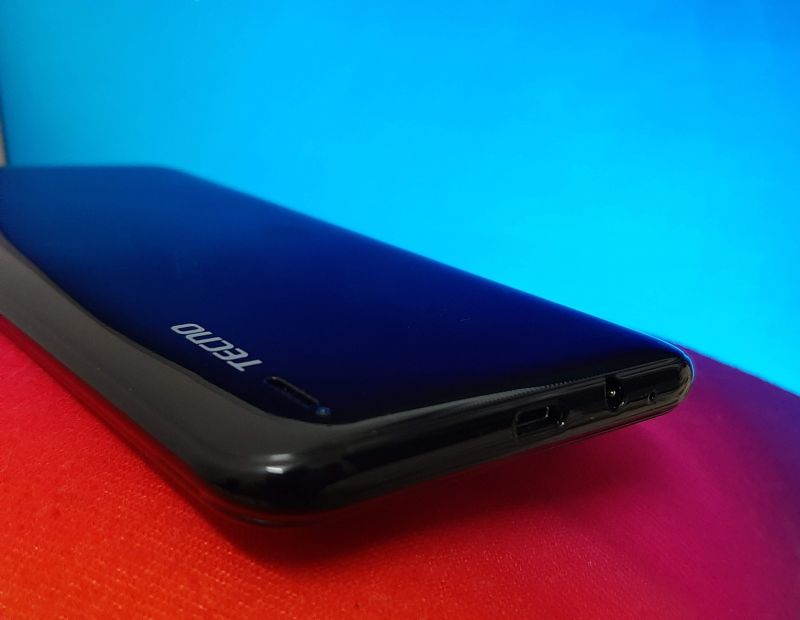 It has a clean display with colourful themes, running on Tecno’s own HiOS interface which provides a number of themes, fonts and other display elements we would explore later when talking about its software. 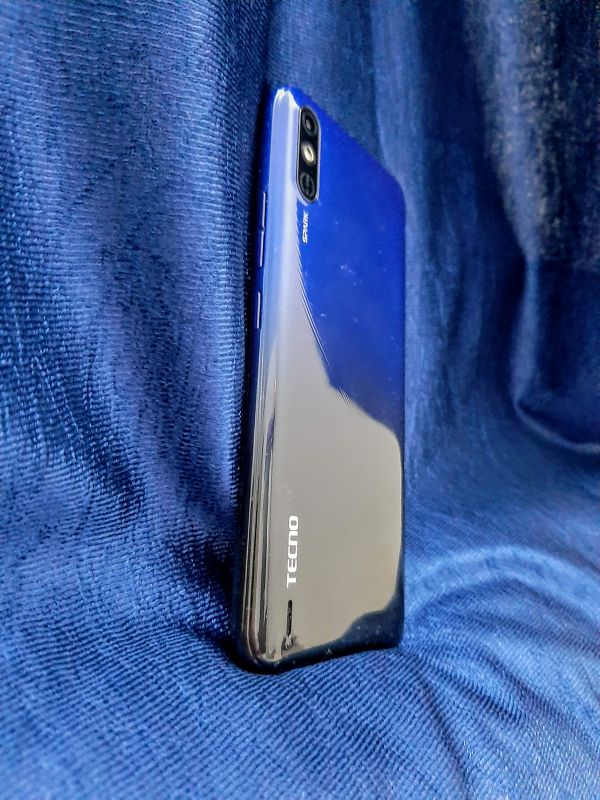 The phone has an 8MP rear camera with a 78-degree wide-angle along with dual flash. It has a variety of presets to support the camera like ‘bokeh mode’, ‘pro’, ‘panorama’, ‘beauty’, ‘AI Camera’, and ‘AR mode’ with filters. At 8MP the quality of the pictures isn’t very special; however, with features like adjusting the ratio, applying colour filters as well as changing size and resolution, the Spark Go’s camera provides quite a few additions at this price.

More on the modes, its ‘Bokeh mode’ works as a sort of portrait mode as found in other phones, a sample of which you can see in the picture below. 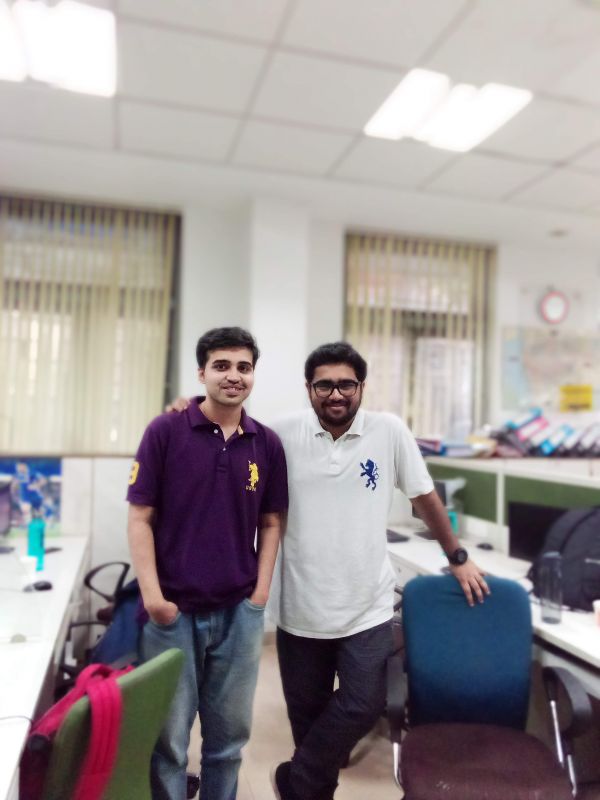 The beauty mode made images sharper, making facial details clearer and to a user, we would recommend using this mode more often than the default ‘AI camera’ to click pictures, if they can tolerate a little more grain.

Moving on to the selfie camera, the phone has a 5MP sensor along with a flash. The flash also doubled up as a LED notification light while charging.

It also has a variety of presets like ‘Portrait’, ‘beauty’, ‘AR Emoji’, and a ‘Wideselfie’ mode apart from the plain and simple default mode. The ‘wideselfie’ as the name suggests would allow you to click wider selfies in portrait mode, by turning it to the left and right. One needs to be extremely still while doing so and then the results would be worth the endurance. 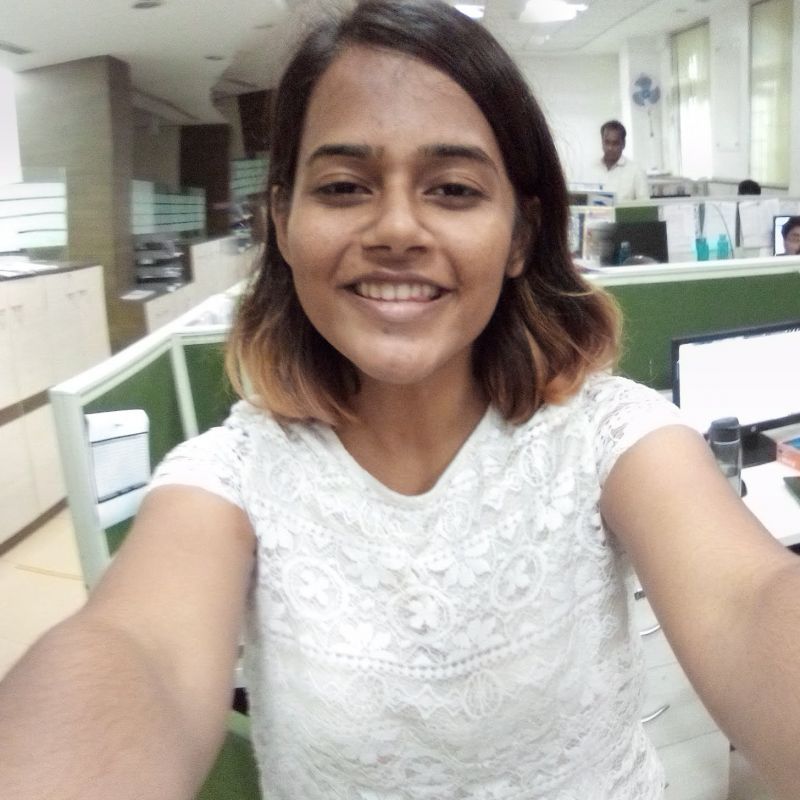 Once again, the beauty mode superseded the normal camera in terms of clarity, this was especially the case during the night or dim lighting conditions. The phone’s portrait mode nicely added depth to selfies, while its AR emoji mode provided entertaining filters, to say the least.

Rest of its features, like colour settings, sizes and resolutions as well as the facility to change the ratio of the photo remained like they were in the rear camera.

The camera also has a feature of providing you with extra beautification as well as an option for a flashlight during video calls; however, that is facilitated more by Tecno’s HiOS UI than the camera itself. Thus, we shall dive into it a bit later.

Last but not the least videography on the camera was a bit unclear, to say the least, and lost focus more than once when I tried to use to capture myself cooking. However, if you’re not one to vlog, or simply shoot videos using a budget phone then this shouldn’t bother you.

The Tecno phone runs on a 3000mAH lithium-ion battery, giving it enough juice to run comfortably throughout the day and even a little more. However, this was when I used it with the hotspot on occasionally. Otherwise, with simple phone calls and messaging, this battery may even run for a good two days as it promises to.

If you would like for it to last longer, you can even keep its power saving mode on in the background. From 15 to almost 75 per cent it has varying extents to which it can conserve battery.

The battery on the phone is removable and it is also supported by a safe charging feature in the phone. With this feature, your handset is taken care of by stopping the battery from overcharging in the event you should forget to disconnect it from the power adapter.

Charging on the phone, however, took quite long. A regular charge from 0 to full capacity took almost 2-hours on its charger.

The phone runs on HiOS 5, Tecno’s custom UI that’s built on top of Android 9 Pie. This gave the phone access to multiple features, themes and even custom applications designed for the OS through an application called App store.

There were also quite a few pre-installed apps on the phone like PhoneMaster and Kika Keyboard which, unfortunately, we would have to say annoyed us with their notifications after a while. However, the former provides storage cleaning and phone temperature management so it should be useful to the end-user in the long run.

For a phone in its price segment, its UI was quite good. The phone had different modes such as reading, gaming, one hand, WhatsApp as well as bike modes. If you’re wondering, the last one pauses your notifications, mutes or auto rejects your calls for two hours and gives an automatic reply to all messages received during the period. The WhatsApp mode is built for when you would like to especially save battery and mobile data usage by using only WhatsApp on your phone and nothing else.

Interestingly, the phone goes a step further for your WhatsApp usage and experience. With a separate application called ‘Social Booster,’ you can create customized stickers and use the front camera’s flashlight and beauty mode during WhatsApp’s videocalls. While the flashlight definitely worked and helped with dim-lighting conditions, the beautification addition didn’t really make a difference.

The phone provides other features, like a ‘battery lab’ for better management of your battery usage, intelligent voice broadcast, multiple gestures for ease of usage and a ‘HiOS’ lab which provided features like in-built translation.

Another feature the phone tried to bring in was the smart panel, which is a short cut for your preferred applications available by swiping at the extreme left of your screen, something which is also available on more expensive phones now.

However, while the panel is definitely a useful feature with Spark Go the phone’s size and the panel’s placement made it an inconvenience. Placed towards the bottom half of the screen, the transparent, thin icon for the panel kept accidentally opening as I tried to type or backspace text.

Luckily, you can turn that off from the phone controls.

Running on 2GB of RAM, the phone has a 2GHz quad-core MediaTek Helio A22 processor. This is the same as a lot of other budget phones, but irrespective it gave us at least decent user experience. Applications were quick to open, except for heavy items like PUBG, which should not even be expected for a phone at this price. Along with this, there was also barely any lag in inter-changing between the applications. However, we did experience them when we were trying to use the phones’ split screen feature. This should explain why we initially said that the phone often tipped itself over trying to execute all of its features. 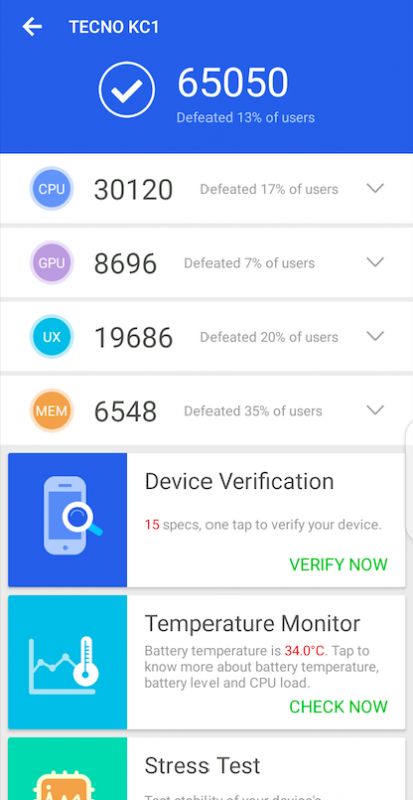 The phone heated up; however by not much and only when some heavy functions like playing videos or games were being performed. Meanwhile, the phone’s face unlock worked like a dream even in different lighting conditions.

The Tecno Spark Go is ultimately a phone worth buying at Rs 5,499. What with its rich in-built features and security! However, the phone felt a little bit odd only in terms of its storage capabilities. 16GB storage in this day and age of proficient, sometimes excessive internet usage seemed naive.

With us at least, a week’s usage left us with only 4GB of free space. The phone only gives you 9.77GB of storage, to begin with. This should get filled up with the early morning deluge of good morning WhatsApp images itself.

Thus, if you can afford to shell out a few thousand rupees more, we would suggest you go for Tecno’s slightly higher priced Spark Air 4. This would give you 3GB of RAM and 32 GB of in-built storage with the same specifications as the SparkGo, just at Rs 6,999.