Google has been struggling to push updates to all its partner manufacturers since the inception of Android. Despite releasing an update every year, millions of Android devices are stuck on an older version of the operating system, prone to security vulnerabilities. Google keeps on releasing a distribution chart for all versions of Android currently in use in devices across the world and the latest chart shows exactly what we have been seeing for the last couple of years — delayed or no updates to the latest version.

The latest Android Distribution Chart shows last year’s Android Oreo — both 8.0 and 8.1, still gaining in on a number of users across devices around the world. Oreo made a growth to 14 per cent compared to the previous 12 per cent. What’s surprising is that 2016’s Android Nougat 7.0 and 7.1 are still the reigning champs of the open source OS, dominating the market with a share of around 30.8 per cent. However, the share has dropped slightly compared to last month’s figures. 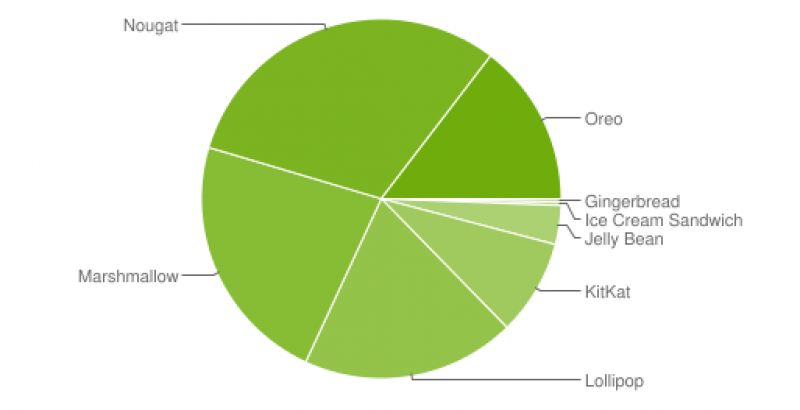 2015’s Android Marshmallow comes in third with a market share of 22.7 per cent, declining from last month’s 23.5 per cent. Android Lollipop still rocks around 19 per cent of devices around the world, while KitKat 4.4 has gone down to 8.6 per cent.

Since last year, Google has taken the matter of Android updates very seriously and even built Project Treble into Android Oreo for easing smoother update rollout. However, despite that, manufacturers have been struggling to deliver the latest version of Android even to their flagship models. Up until now, Google’s Pixel range and the Essential PH-1 are the only devices to enjoy Android Pie, with all other leading players such as Samsung, Xiaomi, Sony and others yet to roll out the update on any of their models. In contrast, Apple’s latest iOS 12 will be delivered to 2013’s iPhone 5S as well, soon after the stable build is finalised by Apple.