HTC U11 beats the iPhone 7 Plus in performance benchmarks

Although Apple’s A10 chip is very powerful, the Snapdragon 835 on the HTC U11 fares better in terms of hardcore performance, despite having the gimmicky ‘Edge Sense’ feature.

Whenever it comes to benchmarks, Apple’s iPhone always triumphs a lot of Android smartphones, no matter how powerful they are. This year too, no Android smartphone managed to beat the bigger Apple iPhone 7 Plus in terms of performance benchmarks on AnTuTu. However, that has changed with the launch of HTC’s flagship U11. 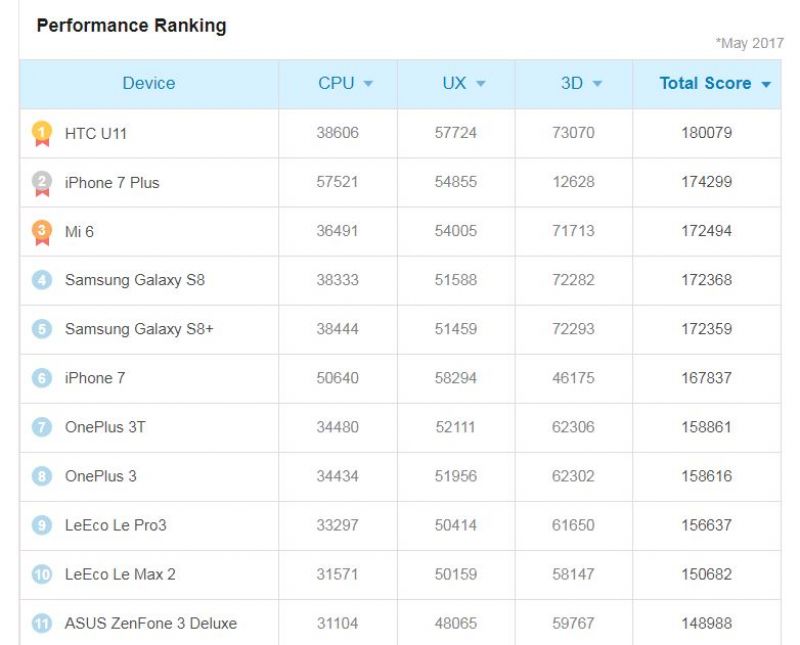 Although Apple’s A10 chip is very powerful, the Snapdragon 835 on the HTC U11 fares better in terms of hardcore performance, despite having the gimmicky ‘Edge Sense’ feature. The HTC U11 runs on a mildly customised version of Android Nougat 7.1.1 and utilises 4GB of RAM to aid smooth multi-tasking. The Xiaomi Mi 6 also uses the SD835 chipset but runs on a heavily custom version of Android (MIUI 8) on top.

The OnePlus 5 hasn’t visited the official charts yet, but we have a fair idea that it manages to just about beat the Xiaomi Mi 6. This paves way for the HTC U11 to be the undisputable performance king until the next iPhone lands in the market.