Technology Other News 26 Oct 2016 New prototype to rep ...
Technology, In Other News

According to designers of vertical walking system, the future will see billions more people moving into urban areas where skyrocketing land prices will force apartment buildings to be built even taller.

Human ancestors are said to have evolved from apes that once swung through trees to roam about, and could move in almost any direction. But today, in our modern environment, even simple as going up and down, it is fair to say that we have de-evolved. Stairs, elevators, and lifts take up precious space in the buildings. They are expensive, complicated and expensive to maintain. Now a new human-powered system prototype dubbed Vertical Walking has been developed that requires just ten percent of the effort needed to climb stairs, and can easily move up a person onto a vast number of floors.

According to designers of vertical walking system, the future will see billions more people moving into urban areas where skyrocketing land prices will force apartment buildings to be built even taller. Elevators will eventually run out of space and stairs will become impractical. Yet, with more buildings, less green space, and fewer opportunities to exercise, some form of regular physical movement will be essential. This is where Vertical Walking system steps in. 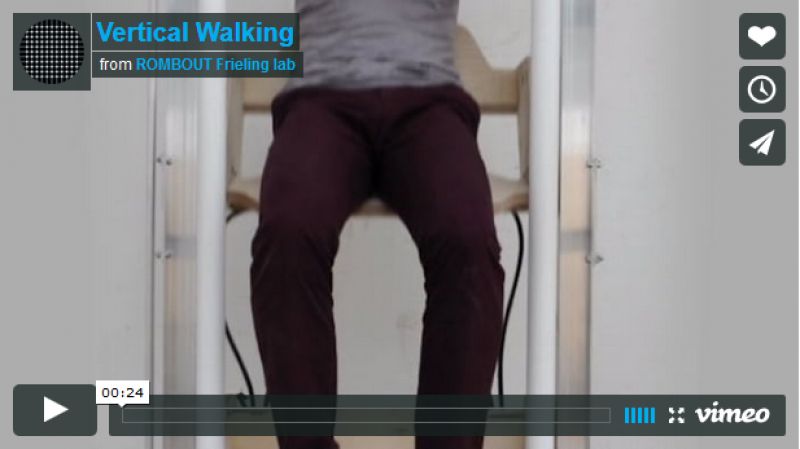 Designed by the Rombaut Frieling lab in Eindhoven, Netherlands, Vertical Walking uses a system of upright rails that incorporate pulleys and a clever gripping system to allow a user to incrementally move between floors in a building, using less than 10 percent of the effort needed to climb stairs, with no external energy input needed.