Why should you not tell your iPhone "Hey Siri, 108"

The command to Siri using iPhones is going viral and can become a chaotic issue soon if not stopped. (Photo: Mic)

Siri is an intelligent artificial intelligent assistant by Apple for iPhones and iPads. However, there are some commands that should be taken seriously as they can cause a panic situation with law enforcement agencies.

And for any reason if you end up saying ‘Hey Siri, 108’ into your iPhone, it ends up calling the local emergency services in that country. This craze is going viral overseas and people are fooling around with Siri to dial 108 (India’s emergency services – either as a prank or a test). This causes Siri to call 911, which is become a huge task and inconvenience for 911 emergency services in America.

The law enforcement agency in Texas is not happy about it. Cnet reported that The Sheriff's office of Harris County, Texas, has taken to Facebook ask people to stop.

“The Harris County Sheriff's Office, along with Texas NENA, are encouraging iPhone users NOT to test the '108' command. This viral prank is becoming increasingly popular on social media, with various speculations as to what the command does. The command, in fact, will instruct Siri to call emergency services, which could potentially tie up emergency lines. In case of an emergency, please dial 9-1-1.” 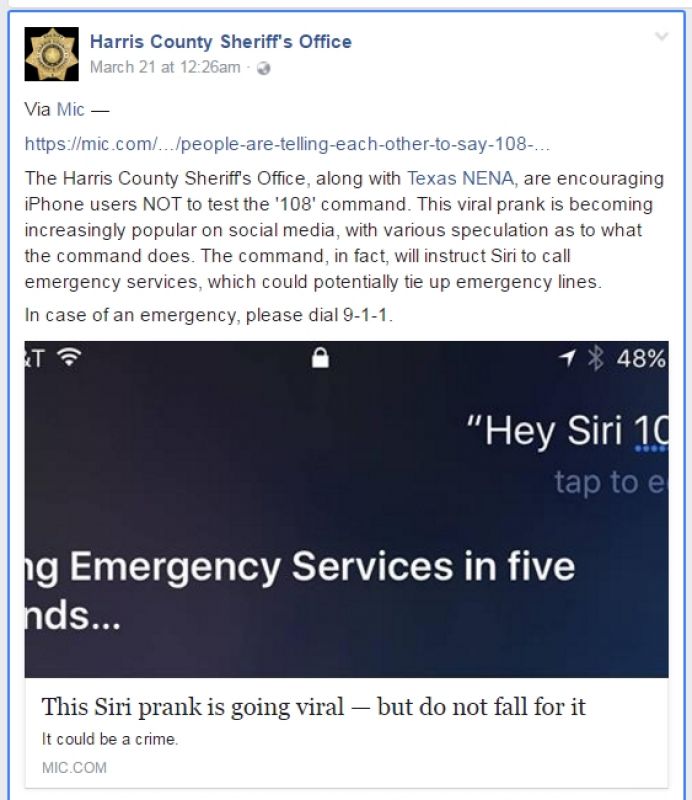 The prank was shared on social media websites and everybody seems to be playing around with Siri to find out what happens. This could soon be a case of ‘cry wolf’ where the emergency services would not be able to distinguish between a prank call and a real emergency. On the contrary, someone who was to really call up for an emergency would suffer because of the massive issues.

Mic reports, ‘This prank is problematic because it uses resources that are vital for others trying to receive help in real emergency situations. Roughly 240 million calls are made to 911 in the United States each year and placing prank calls can be considered a crime.’

According to the National Emergency Number Association:

‘It's a prank call when someone calls 9-1-1 for a joke, or calls 9-1-1 and hangs up. Prank calls not only waste time and money, but can also be dangerous. If 9-1-1 lines or call takers are busy with prank calls, someone with a real emergency may not be able to get the help they need. In most places, it's against the law to make prank 9-1-1 calls,’ reported Mic.