Technology Other News 24 Aug 2016 Pokemon Go loses its ...
Technology, In Other News

Pokemon Go loses its craze with a 10-million user drop

The game is created by Niantic, spun off from Google last year, and Pokemon Company.

Pokemon Go is starting to lose its buzz despite the global hoopla created when it launched in July, reveals some studies done by analysts.

According to a report published by Bloomberg, user data from analytics firm Apptopia shows that Pokemon Go had around 45 million users in mid-July, but the figure begins to decline by more than 12 million since the beginning of August itself, bringing it down to 30 million users daily. 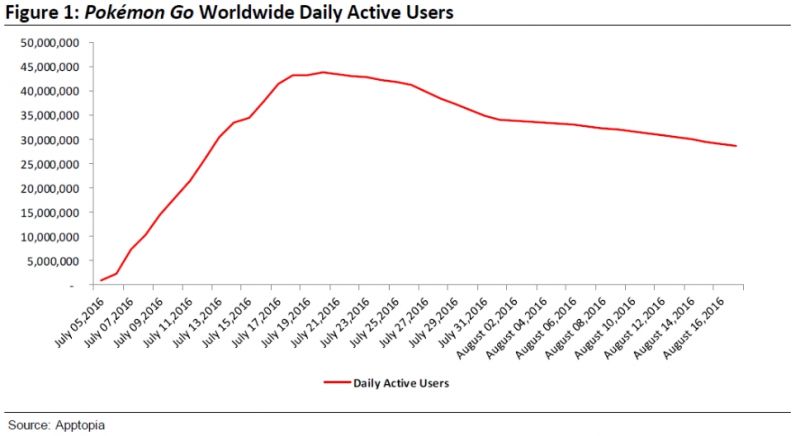 The other major apps, such as Twitter, Facebook, and Snapchat “can breathe a sigh of relief,” said senior analyst Victor Anthony at Axion Capital Management, an investment management service in the US.

“Given the rapid rise in usage of the Pokemon Go app since the launch in July, investors have been concerned that this new user experience has been detracting from time spent on other mobile focused apps,” Anthony added.

According to a statistics report by App Annie published in the early July, the data showed that Pokemon Go game took the number one spot in less than a day on Apple’s App Store in the US alone. In addition, web analytics firm SimilarWeb also showed that the game was installed on more than 5 per cent of Android devices in the US on July 8, just two days after its release.

Pokemon Go is created by Niantic and Pokemon Company. It was first launched in US, Australia and New Zealand and was later released in more than 26 countries across Asia. However, the game has not been yet officially released in India.

10 ways to beat the exam stress with Alexa

Want to become a Pro at PUBG MOBILE? Here’s 5 pro drills you must master; with pics