Kaspersky’s survey found that there is a desire amongst many consumers to use cryptocurrency, but a knowledge gap is getting in the way of taking the plunge.

New Kaspersky’s survey has discovered that a lack of understanding and trust is holding consumers back from using cryptocurrencies. The Kaspersky’s report, ‘Uncharted territory: why consumers are still wary about adopting cryptocurrency, reveals that whilst 29 per cent of people have some knowledge of cryptocurrencies and there is a demand among many to Use the technology, just one-in-ten (10 per cent ) fully comprehend how they work.

The rate in which cryptocurrencies are being adopted by global consumers is slowing down, despite celebrities like Johnny Depp and YouTube influencers such PewDiePie embracing the technology. Many consumers still lack a proper understanding of how cryptocurrencies work and this is continuing to halt mainstream adoption. To date, four-in-five people (81 per cent) have never purchased cryptocurrency, highlighting just how far away we are from it being accepted as a common form of payment or investment.

Kaspersky’s survey found that there is a desire amongst many consumers to use cryptocurrency, but a knowledge gap is getting in the way of taking the plunge. In addition, many people who thought they knew with what they are dealing with later decided against using cryptocurrency. Nearly a fifth (18 per cent) stopped because it became too technically complicated. 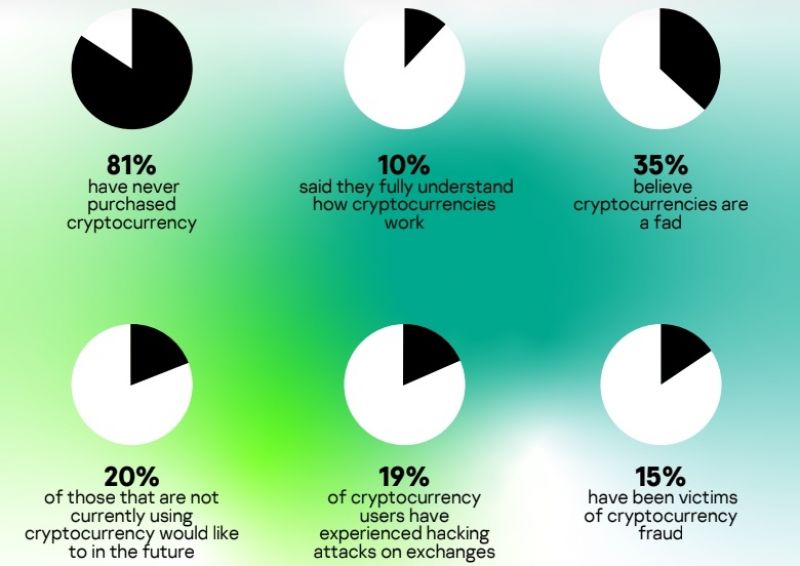 This lack of understanding could be leading to mistrust in cryptocurrencies’ ability to keep consumers’ money safe. For instance, nearly a third (31 per cent) of respondents stated that they believe cryptocurrencies are quite volatile and they need to be stabile before they are prepared to use them. There is also a common perception amongst consumers that cryptocurrency will not be around forever. A third (35 per cent) believes cryptocurrencies are a fad that is not worth bothering about.

While widespread interest in cryptocurrencies may have already peaked, there is still a demand to use the technology. A fifth (20 per cent) of those surveyed said that while they are not using cryptocurrency at the moment, they would like to in the future. Yet there is still doubt amongst consumers – often led by a fear that there is a real risk to their finances. Fraudsters can use cryptocurrencies to their advantage, with around one-in-five (19 per cent) of those surveyed saying they have experienced hacking attacks on exchanges. Criminals also create fake e-wallets to attract people to unwisely invest their money, and 15 per cent of consumers have been victims of cryptocurrency fraud.

Following several years of cybersecurity research into crypto start-ups, Kaspersky recommends crypto businesses adopt best security practices for smart contract developers, use proven frameworks for smart contracts (such as https://openzeppelin.org/) and conduct a third-party assessment of the smart contract to ensure any potential vulnerabilities are not missed.

“It is clear that mainstream adoption and growth of cryptocurrency is being held back due to the vulnerable nature of the technology. While there is a high appetite to use it, giving your hard-earned cash to something you don’t fully understand, or trust, is a hurdle. With the safety of investments being of paramount importance to consumers, it is vital that they take their own steps to safeguard it. Like with any cyberthreat, there is no substitute for vigilance – if something looks too good to be true, then it probably is. If you want to trade crypto-assets on any exchange, pay attention to the safety of your account’s credentials. If your goal is long-term investment or use crypto-currencies for payments, then store it in safe environments and use multiple wallets, or distribute between both software and hardware. We also encourage crypto businesses to organize themselves effectively to show they are able to protect their customers’ investments,” Vitaly Mzokov, Head of Commercialization at Kaspersky comments.

“Cryptocurrency certainly has its benefits but, as we can see, many consumers are still unaware of what they are due to concerns over security and how the technology works. It is an exciting industry to be involved in but it is one that is built upon trust. It is, therefore, imperative that cryptocurrency businesses do all they can to protect their networks and ensure their customers’ finances are safe and secure,” explains Alexey Sidorowich, Head of Sales and Business Development at Merkeleon.

You’ll soon have to book slots at your office cafeteria, like restaurant reservations

Flipkart, Amazon gear up for revival of demand for online shopping