Technology Other News 23 May 2017 Beware: Spy cameras ...
Technology, In Other News

Beware: Spy cameras are getting better

Pin hole cameras are nothing but tiny sensors that can grab photos and videos with a very tiny lens — as small as a pin hole.

With the technology industry growing by each day, and the size of electronic components shrinking, we are bound to see a future where fiction is coming true. We have seen this previously, where huge room-sizes computers that existed just three decades ago have now shrunk into pocket-sized computers and almost million times more powerful that before.

However, though shrinking the size of technology can be a boon to mankind, there are some types of technology that can cause security and privacy issues to the core.

The biggest concern today is privacy and with security cameras all around you, there is always a pair of eyes watching you. If the eyes are the security agencies to keep you safe, you won’t mind; but if they are on some pervert, then God save you. Voyeurism is presently a growing concern and with spy cameras getting smaller and cheaper, the issue is only set to rise.

We have seen spy cameras in movies where a guy would rig his or her clothing or suitcase with a camera that records his work. However, those cameras were pretty larger and could only be concealed in something big such as hats, clothes, shoes and suitcases. And now, with technology getting better, pinhole cameras are shrunk to the size of a rice grain.

Previous spying techniques used to be a two-sided mirror placed in the room. But today, a camera can be mounted inside walls and furniture and are camouflaged as a simple screw.

Pin hole cameras are nothing but tiny sensors that can grab photos and videos with a very tiny lens — as small as a pin hole. The sensor feeds a tiny circuit that has its own storage or can transmit data over wireless. All it needs is a little power source using solar, batteries or a mains power, and that too can be easily camouflaged.

Spy cameras are easy to find online. Most of these tiny gadgets come from overseas, especially from China, where electronics manufacturing is dirt cheap. A spy camera can cost you as little as $5 (approx Rs 300), and most often even cheaper if bought in bulk. Online shopping websites such as Aliexpress, BangGood, Deal Extreme and many other such websites from China can be a place for a bargain. You can also find similar items on eBay.

Be alert: If you are in a mall, or a boutique or even a public toilet, you should make sure you don’t see anything amiss in the surroundings. If you find a set of keys left behind by the person who used the place before you, or if you see an empty can of soda just lying around in your changing room, you should not ignore it. 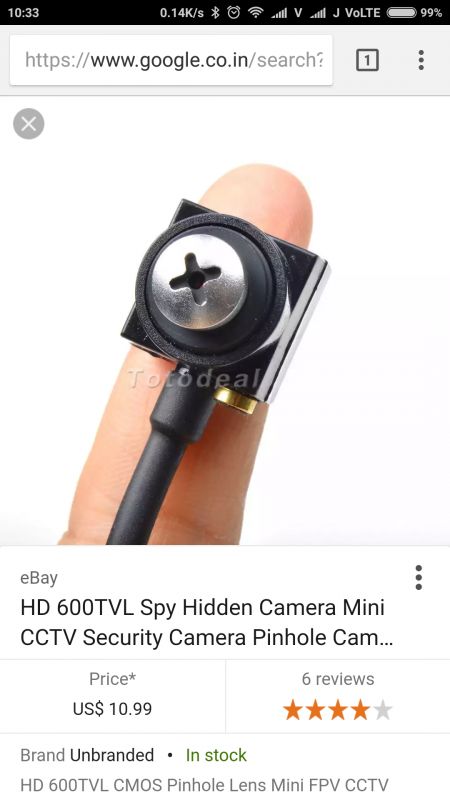 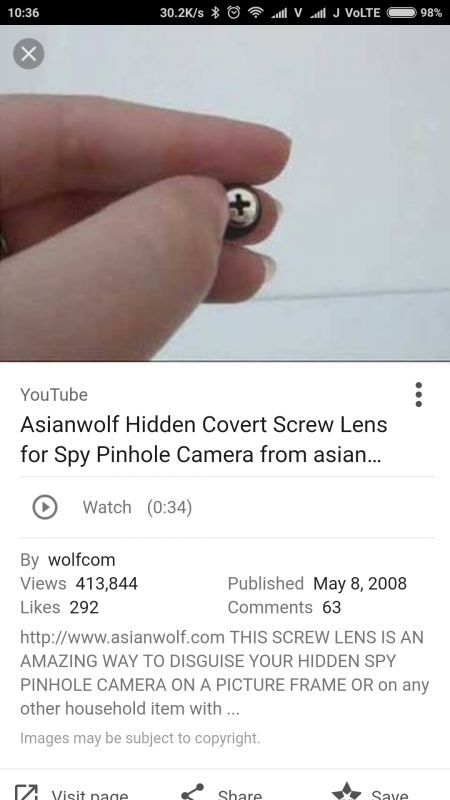 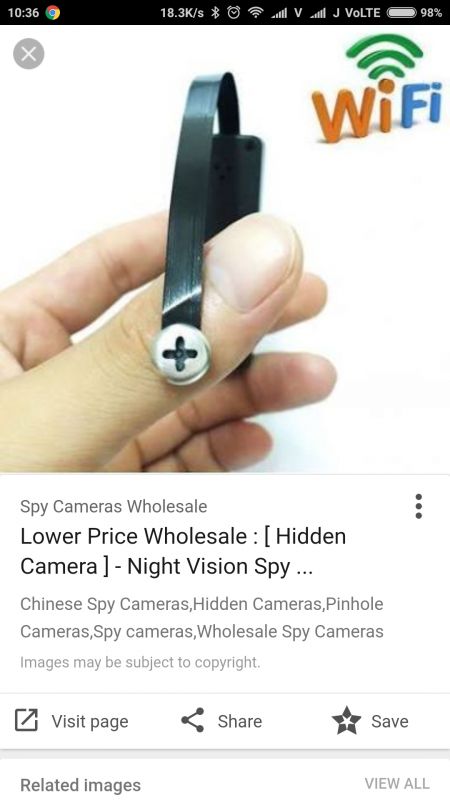 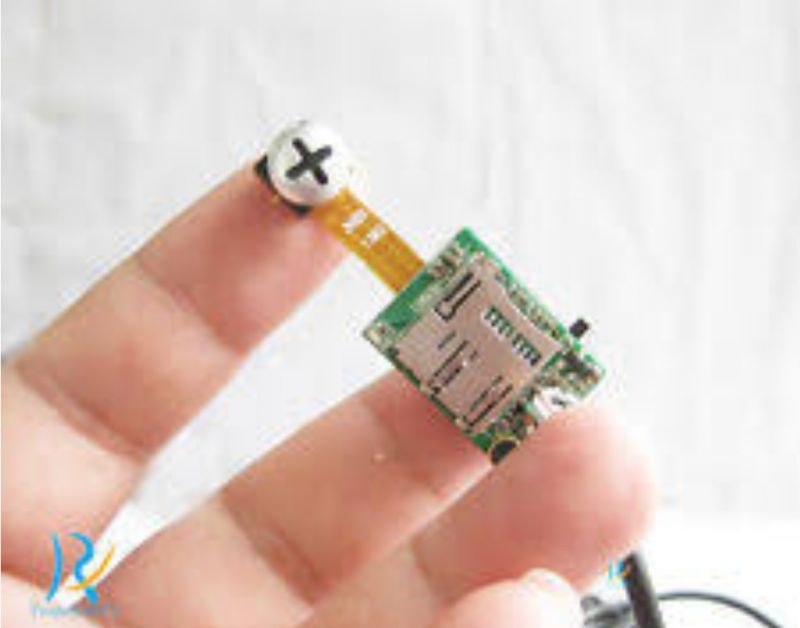 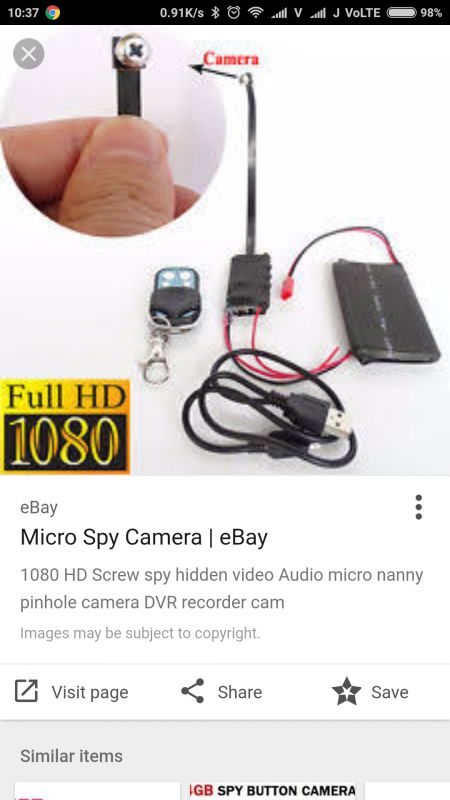 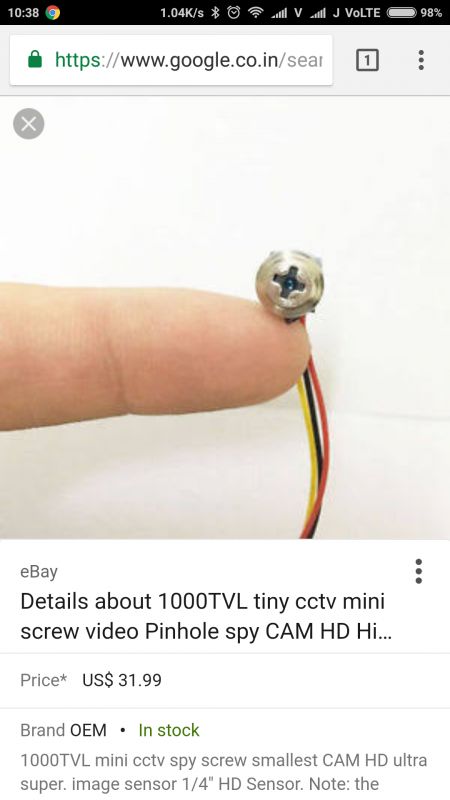 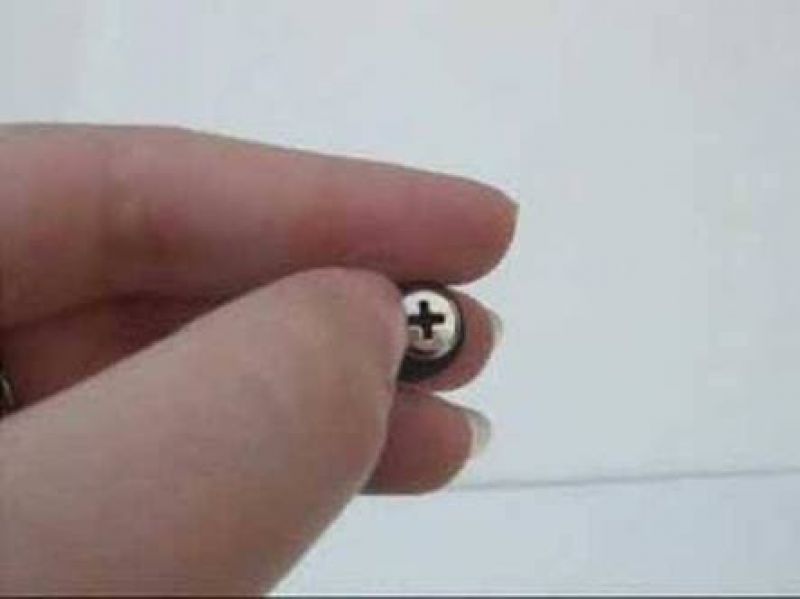 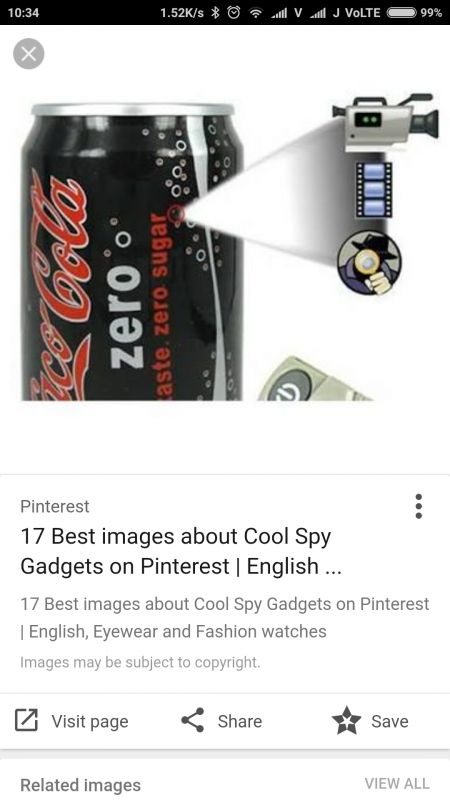 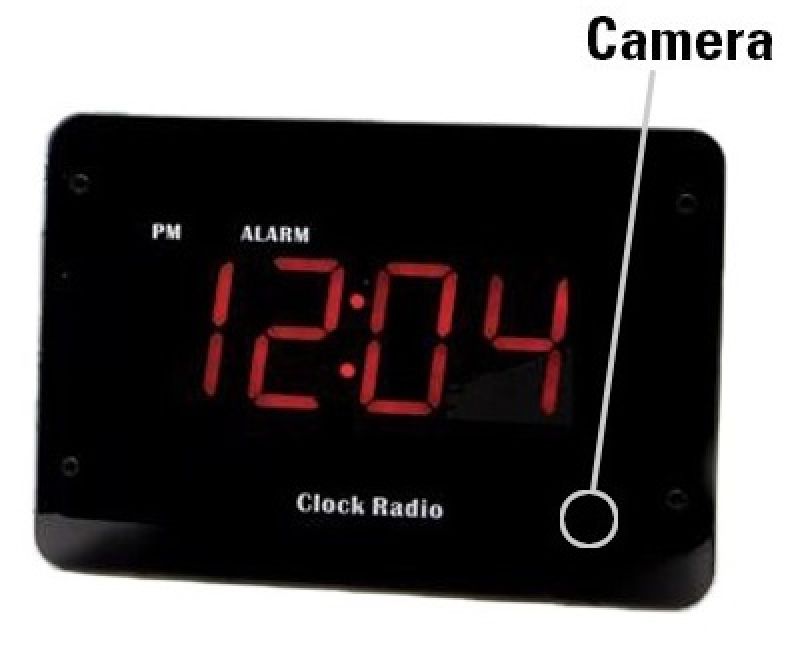 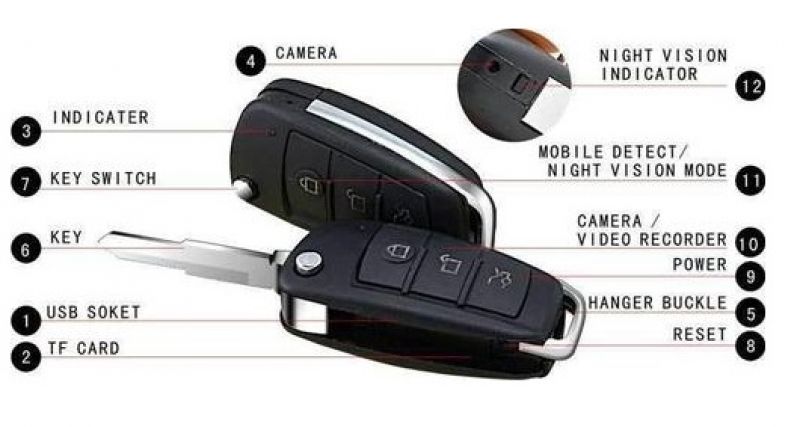 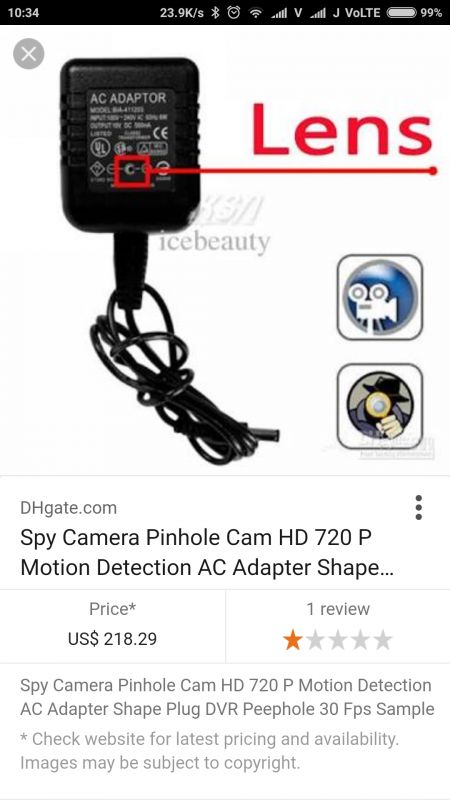 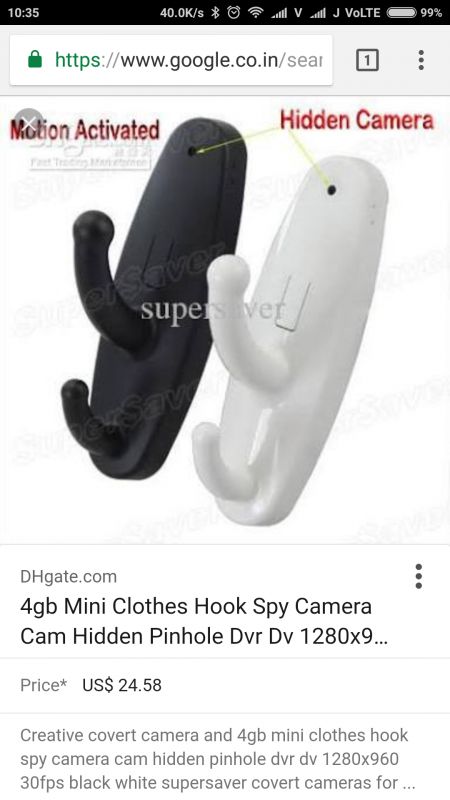 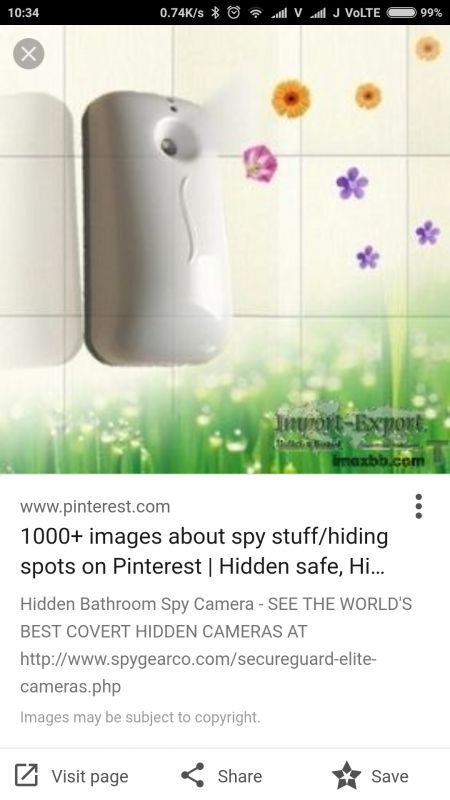 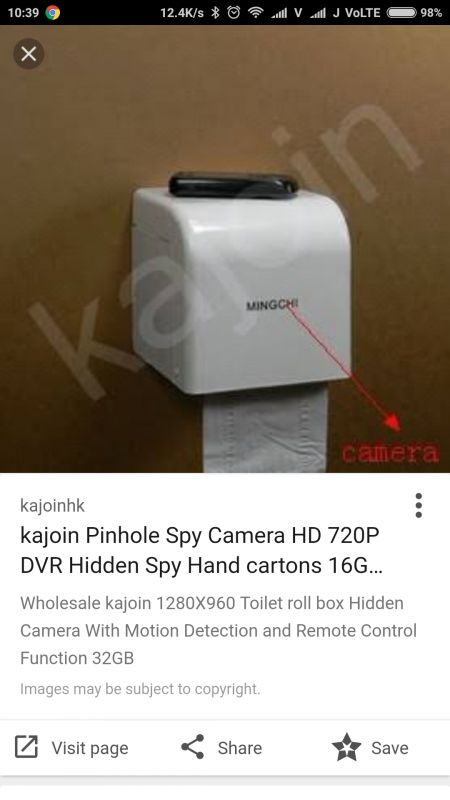 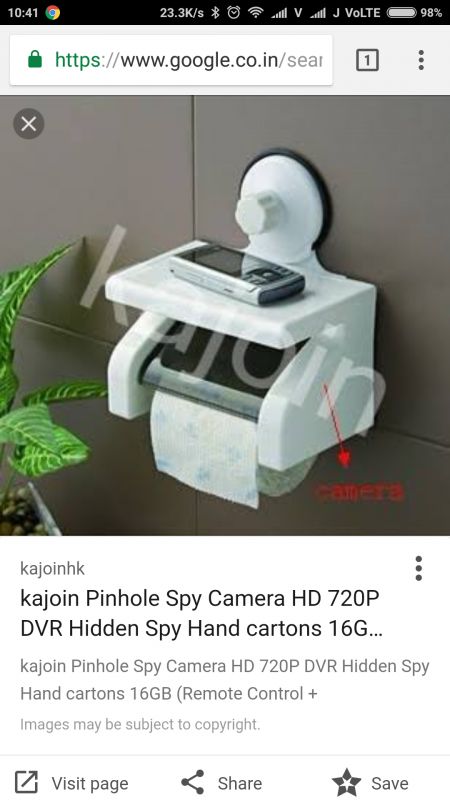 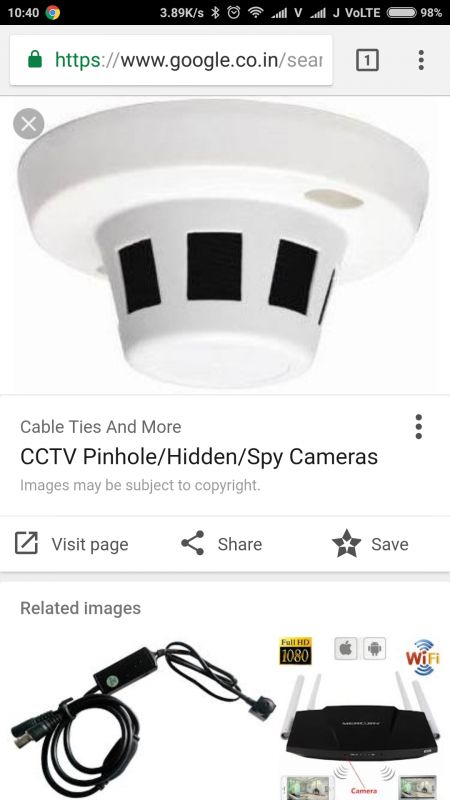 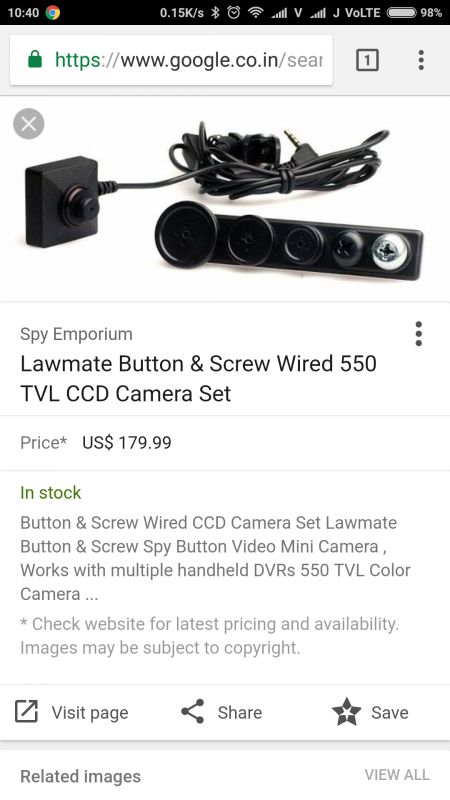 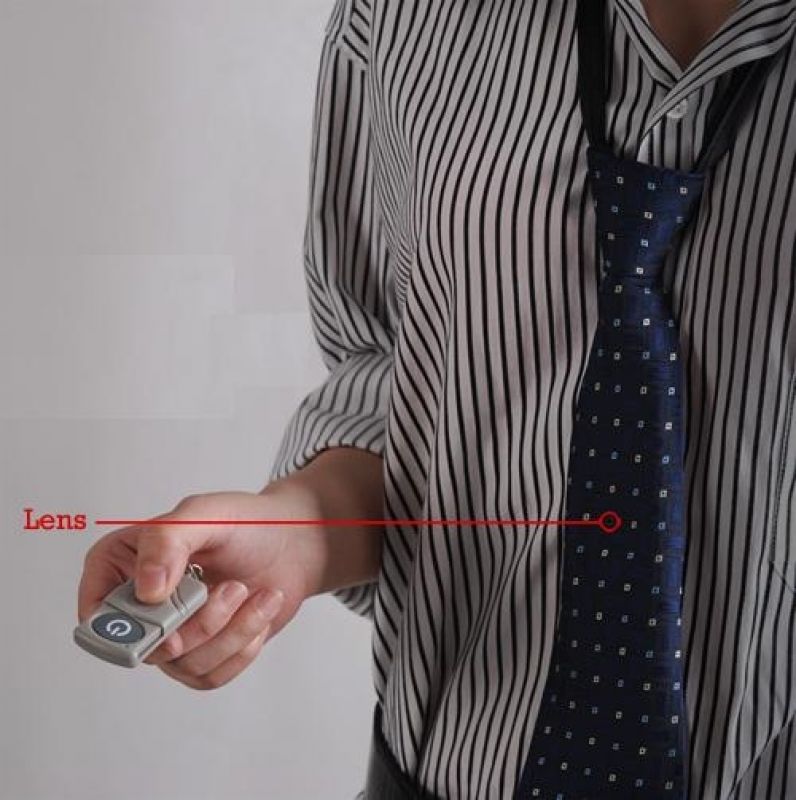 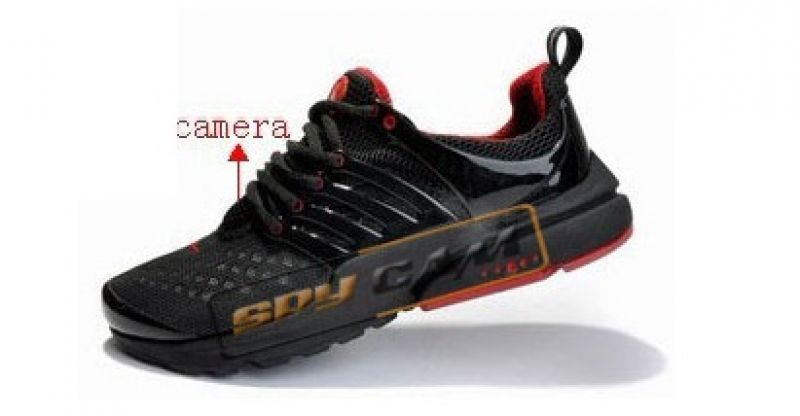 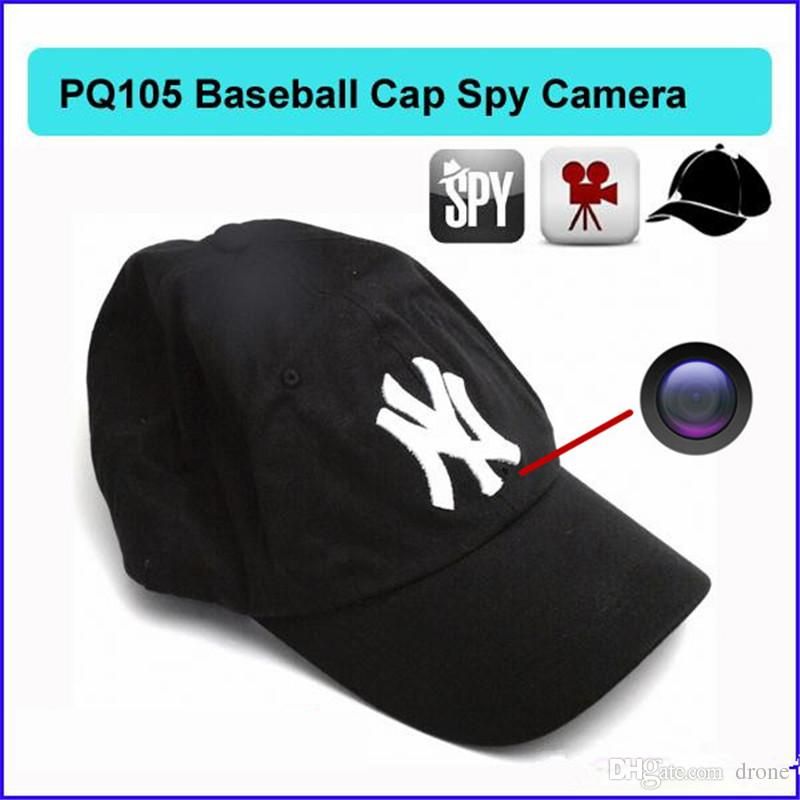 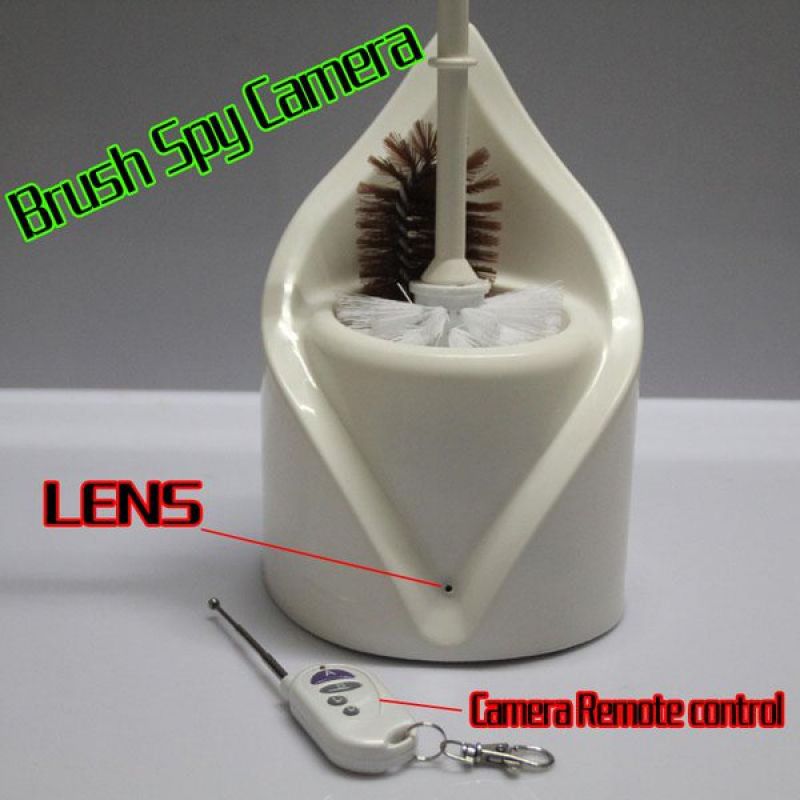 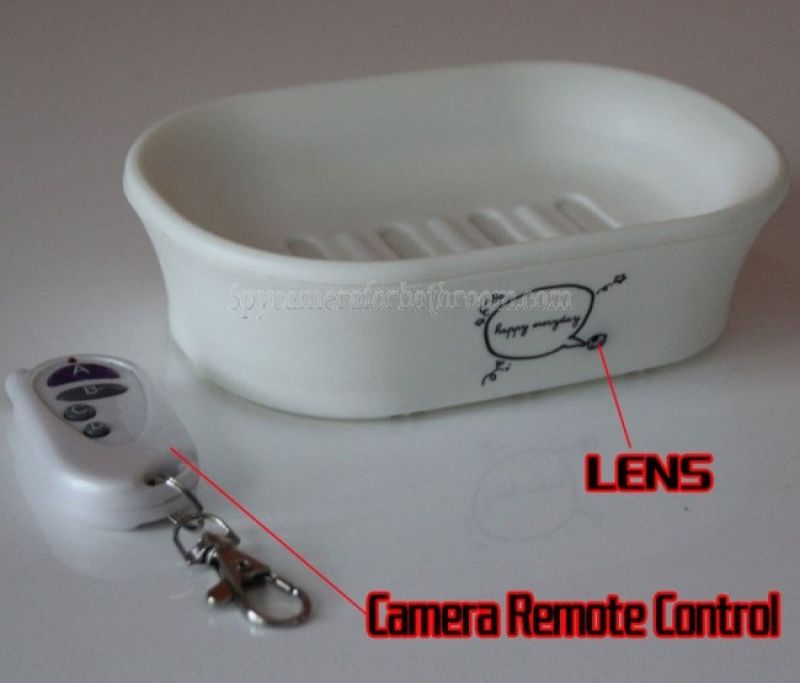 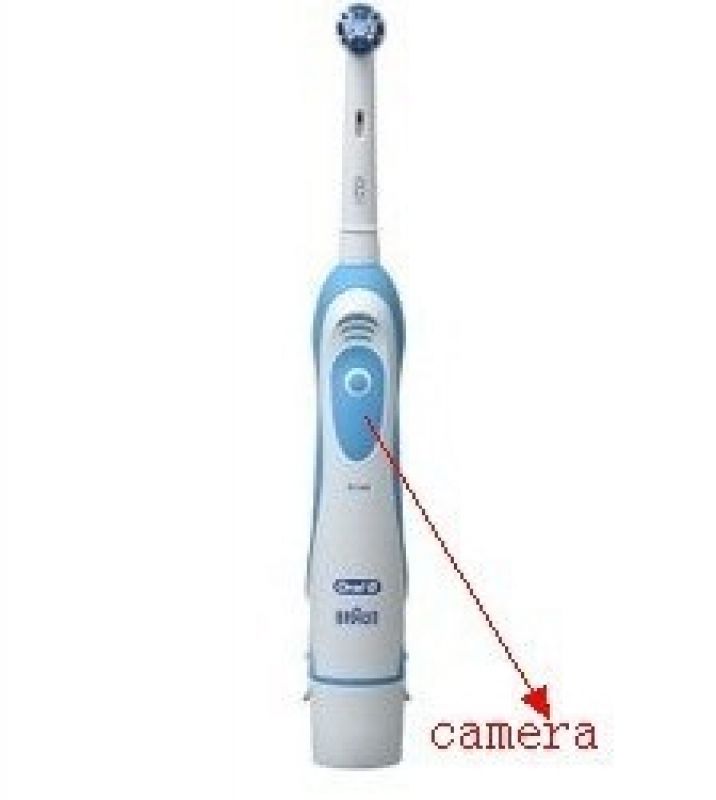 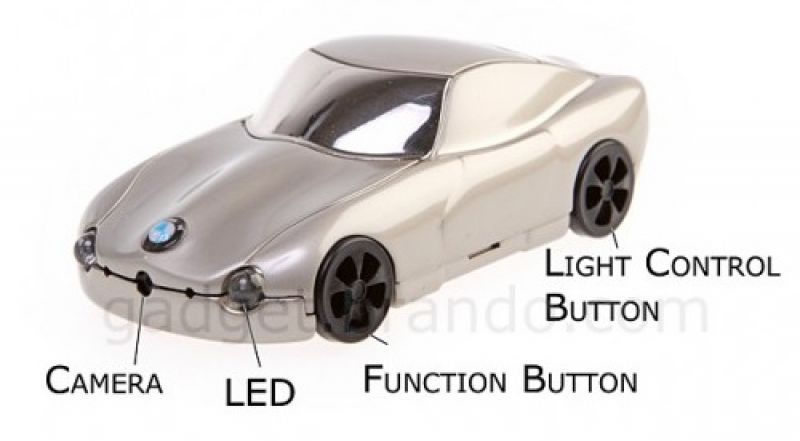 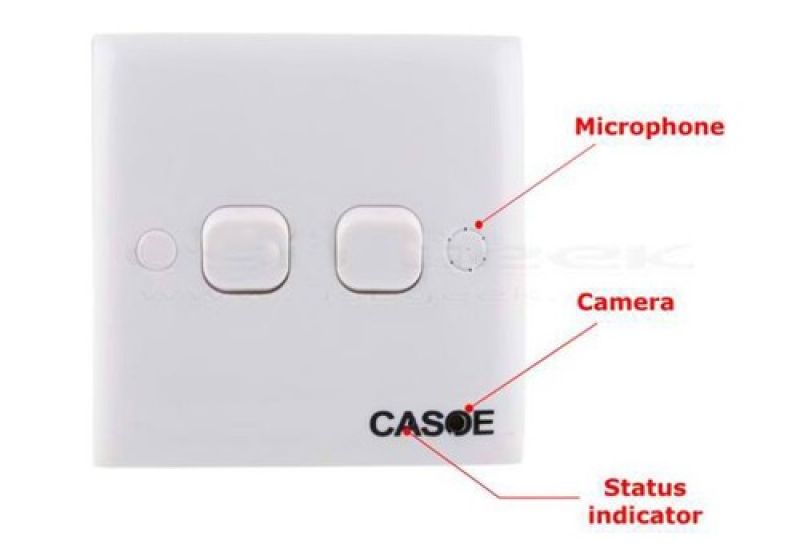 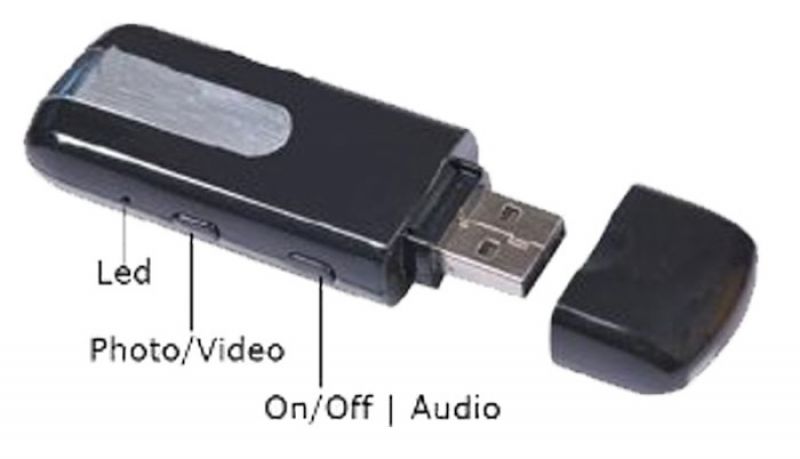 So if you find anything amiss around you in a public place, make sure you are careful. Check each and everything around you before you undress. If you suspect anything that could be a possible camera, cover it with something — wet some tissues and place it over the lens or hole or carry a black sticky tape with you always to stick it on the camera’s opening. If you don’t have anything to help out, you could simply turn the suspected device by 90-gedrees or dump it in a garbage can around you. If still unsure, simply exit the room.

Spy camera detectors: Yes you may have heard of these devices in the market. These are tiny handheld scanners that can help you detect a spy camera in the room. They work in on a simple method — reflection of light. The detectors have a built-in flashing light that reflects back light falling on the camera’s lens. Simply turn off all lights in the room, turn on the camera detector and the flashing light will reflect any possible light that hits a camera lens. The reflecting light will be visible as a tiny red dot which could be a suspected camera. You can do this with your regular smartphone too. Download an app that can trigger your smartphone’s LED flash to pulsate. Some camera detectors can also scan for radio frequencies that are emitted by wireless spy cameras. These gadgets are also available online. 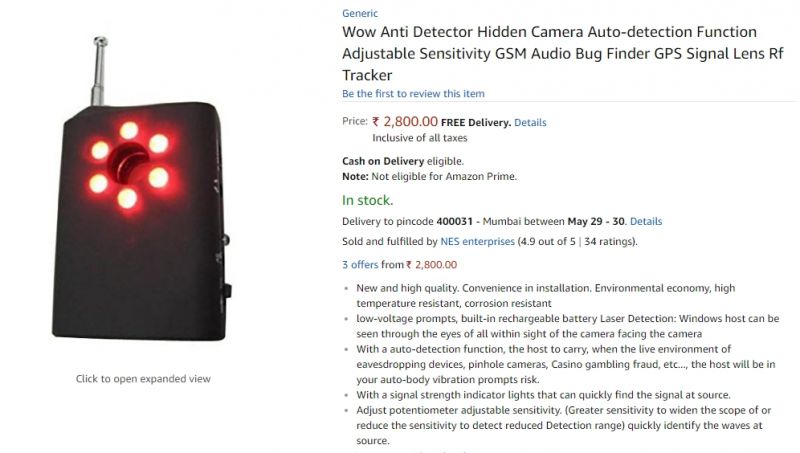 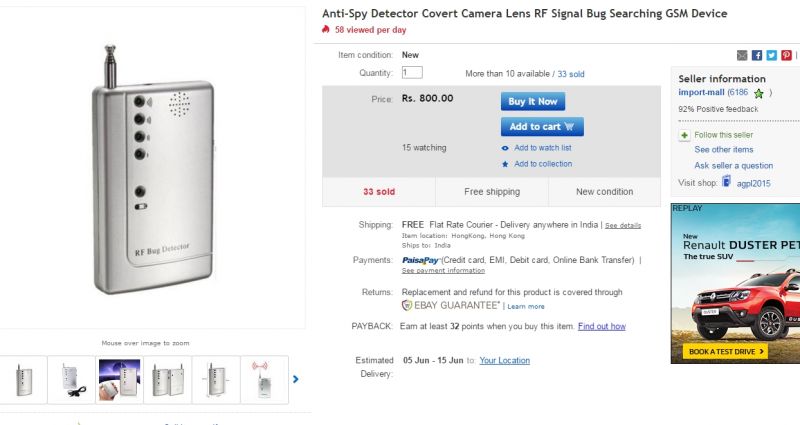 So what should you do if you spot/suspect a spy camera in your changing room or toilet? The first mistake would be probably reporting it to the security guy on duty. Never report the issue with the management of the place. Instead, if you are sure there is something amiss, you should head to the local police station and report the case. Reporting the case to the local staff would only alert them and the place would be cleaned out in no time, leaving you with almost no evidence of the same.

Where can you probably find rooms rigged with spy cameras? Well, you could probably be surprised. Public toilets and changing rooms are the most likely places. You could also find spy cameras in friend’s home or car, on an unknown traveller in a bus or train, and many more unimaginable places. Be safe, be vigilant.