Technology Other News 22 Sep 2019 Leak reveals these 4 ...
Technology, In Other News

Leaks had previously revealed that the Samsung S10 and Note 10 were in the line to get the beta version of the Android 10 and some were even getting tested. (Photo: SlashLeaks/representational)

Google’s Android 10 update is coming to a bunch of phones in the near future, and while it is already in some, a leak has broadened the possibility of it coming to more lower-end, affordable Samsung phones.

Leaks had previously revealed that the Samsung S10 and Note 10 were in the line to get the beta version of the Android 10 and some were even getting tested. However a new discovery by web portal Android Pure hints that the distance between the update and Samsung handsets like those J series or even the A series, may be shorter than previously imagined.

Android Pure has picked a leak from a Facebook post which says that over 40 Samsung handsets, across its J, M, A, S, Note and Tab series are now eligible to get the update to the latest Android OS.  It even has a 5G variant included, which is Samsung A90 5G, however that is it among the South Korean giants collection of 5G supporting devices. .

AndroidPure prefixes its story with a warning, though. It says that the information has not been confirmed.  Sourced from them, you can look the procured list of Android 10 handsets below. 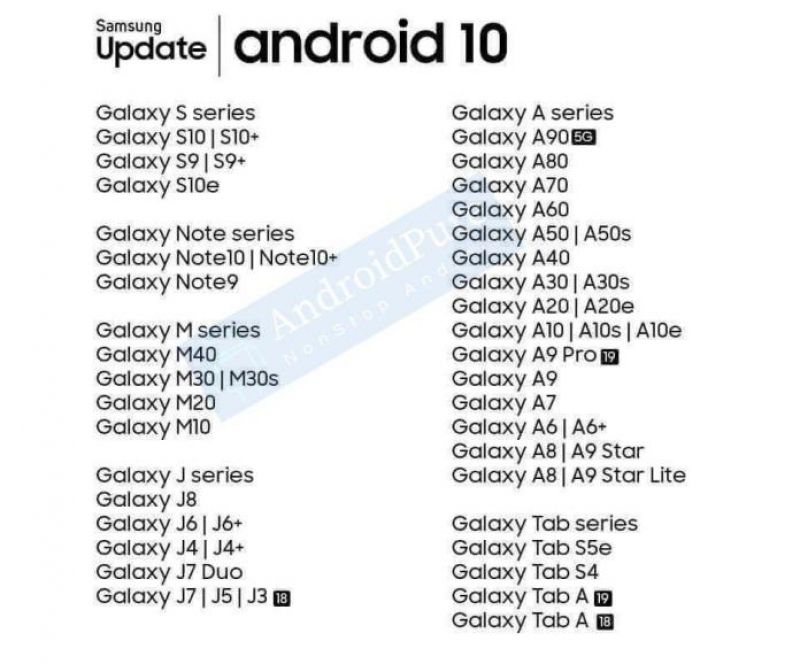 Google’s latest version of the Android OS had been released last month and is already in a few Pixel, OnePlus, and ASUS phones. Noting the emergence of foldable phones, the OS also supports folding phones much like the Samsung Galaxy Fold and the Huawei Mate X.

Dark mode, privacy updates, live captions, new gestures are a few of the upgrades owners of the listed phones could expect should they get and subsequently install such an update.