Technology Other News 21 May 2016 Serving up an ace-ty ...
Technology, In Other News

They have built a bike which runs on a mixture of carbon and water.

At a time when the country is tired of constant rise in fuel prices, five 21-year-old students of Lords Institute of Engineering & Technology have come up with a rather innovative solution to this pressing issue.

They have built a bike which runs on a mixture of carbon and water. The fuel, called acetylene, is quite economical and readily available.

“Noticing how it was becoming increasingly difficult for the common man to deal with constant price hikes, the idea to try and invent something more cost effective came about,” says Faraz Ali, the captain of the team. “Also as students we know this from our own personal experience as we end up spending most of our pocket money on fuel. Other than that, we have other expenses to take care of,” he adds. 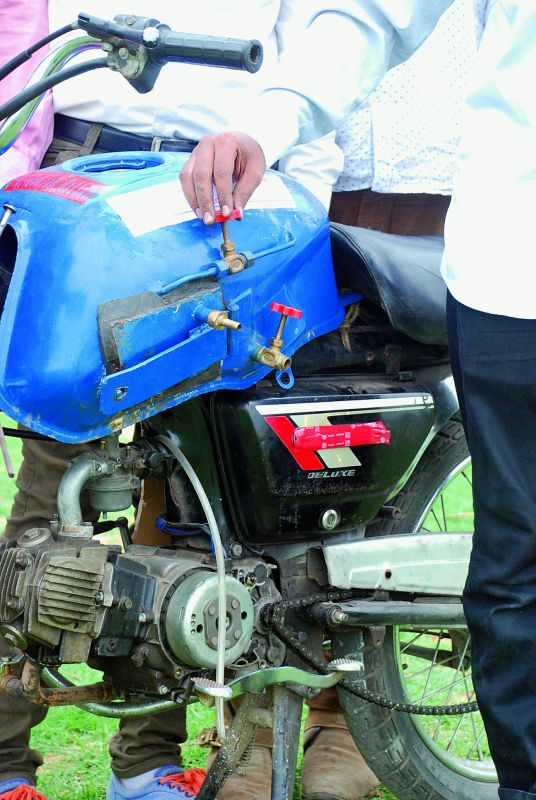 The limestone chamber on the bike

Along with four of his classmates from the Mechanical Engineering stream — Shazer Bari, Abdul Sami, Rasheed and Tarique — Faraz began work on the bike four months ago.

Explaining the principle behind the bike, Faraz says, “We put limestone and water in a modified tank. The combustion produces a gas that is then passed into a modified carburetor. Every time you accelerate the bike, the process repeats itself and propels the bike into motion.”

The reason they chose acetylene was because it costs only Rs 40 per kg and the running cost of the bike is 50 paise per km. “Also, we wanted to make it eco-friendly. It’s very important we do our bit for the society. Hence, acetylene seemed like the most obvious option as the amount of carbon dioxide it produces is almost negligible,” says Shazer.

Working two hours a day, they managed to complete the project within Rs 1,500. Says Faraz, “While the modified tank cost us Rs 1,000, the fuel cost us Rs 500. So it was quite economical. The only thing we spent was our skill and time.”

They now plan to get their design patented. Abdul Sami says, “We plan to approach an automobile companies after that. We want more and more people to start using this bike in order to help the eco-system as well as spend less money.”