Kensuke Takagishi and Professor Shinjiro Umezu, both of the Waseda University Faculty of Science and Engineering, Department of Modern Mechanical Engineering, chose the Fused Deposition Modeling (FDM) type 3D printer, whose low cost makes it most suited for in-home use, and addressed the issue of surface “ribbing,” grooves left between layers of applied resin material.

This research is published in Nature’s Scientific Reports. 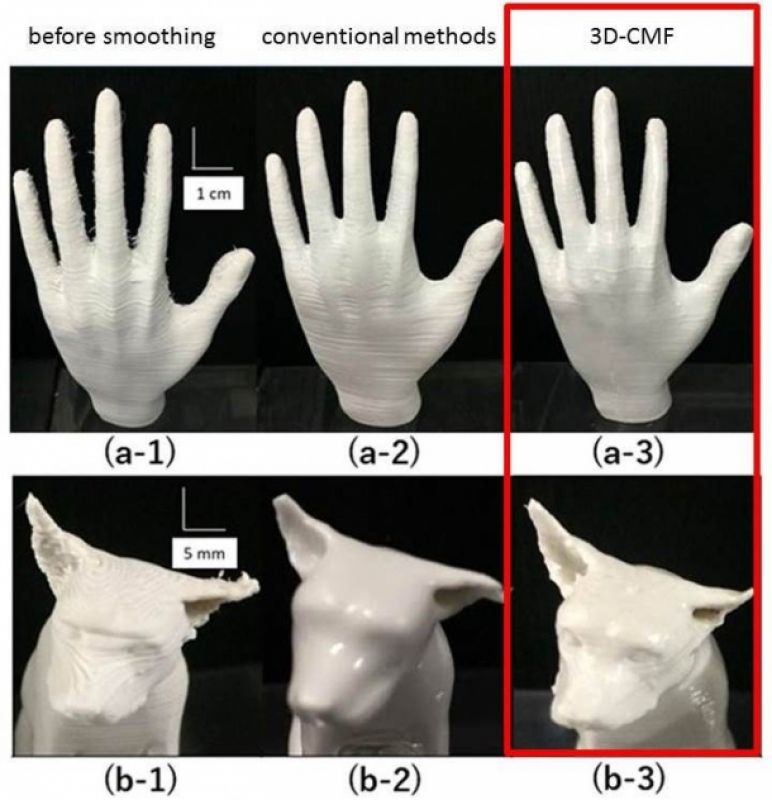 Comparison of printed surface before smoothing (1), with smoothing by conventional methods (2) and by 3D-CMF (3). CMF result (a-3) is more uniform than polishing (a-2), and b-3 shows CMF better preserved surface detail than b-2 (solvent vapor).

One existing method for surface smoothing is polishing, or grinding down the high places to reduce the appearance of “ribs”. However, the polishing devices add complexity and cost to the printer, and capture and disposal of the generated dust add further complexity, making the whole machine impractical for household use.

Another existing method uses vaporized solvents to melt and smooth the surface of the printed piece. This method has the advantage of capturing some of the dissolved material in the bottom of the grooves, improving smoothness and structural integrity with less wasted resin; however complexity of the machine, indiscriminate dissolution of the entire surface (lack of precise control), and the handling of large amounts of flammable solvents are major issues.

The Waseda researchers developed and tested a method called 3D Chemical Melting Finishing (3D-CMF), which uses a tool like a felt-tip pen to selectively apply solvent to particular parts of the printed piece which require smoothing.

The new 3D-CMF method has major advantages over previous methods: removing less material to create less waste and achieve more accurate shaping; and using less solvent for better safety and lower cost. In addition, pen tips can be changed to further increase surface shaping accuracy. These improvements promise to move 3D printing into a much more attractive commercial position, as a realistic possibility for in-home consumer use.

The original article also includes data results of performance testing and photos of the devices used.