The manufacturer has blamed the incident on human error, citing that someone had inserted a defective battery into the robot that caused a thermal runway. (Photo: James Wenzel, via Twitter)

KiwiBot has over 100 delivery robots that help distribute food throughout Berkeley and one of the bot blew up into flames, reports online stated. The manufacturer has blamed the incident on human error, citing that someone had inserted a defective battery into the robot that caused a thermal runway. The manufacturer has promised a new software that will monitor all batteries within the bot in future to avoid any such incidences. The head of product at Kiwi said that they are still investigating the cause of the fire as this is the first incident with the company.

“Kiwi uses many different processes in our delivery operations. One of those processes is relating to replacing the batteries on the robot in case the battery gets low. To help our operations team identify the health of our robots, we use a color visualization method to indicate their battery level: red for robots that need to get the battery replaced asap, yellow for robots that will need to be replaced within an hour, and green for robots that are fine,” said the company on its blog post.

“On the 14th of December this year, one of the batteries for our robot that was idling started smouldering, eventually leading to some smoke and minor flames. A member of the community acted swiftly to extinguish the flames using a nearby fire extinguisher. Within moments of the incident occurring, it had already been contained. The Berkeley Fire Department arrived shortly thereafter to secure the scene, and doused the robot with foam ensuring there was no risk of re-ignition. We took this issue very seriously. Immediately upon learning of the incident, our operations team was dispatched to attend to the robot. We promptly pulled all of our robots from operations, suspending our service until we were able to investigate the root cause. Customers that had orders in progress had their food delivered by hand, minimizing the impact on the service. At no time were customers or members of the public at risk. Kiwi recently unveiled a new battery management process that will ensure that such issues would not be reproduced,” the company said. 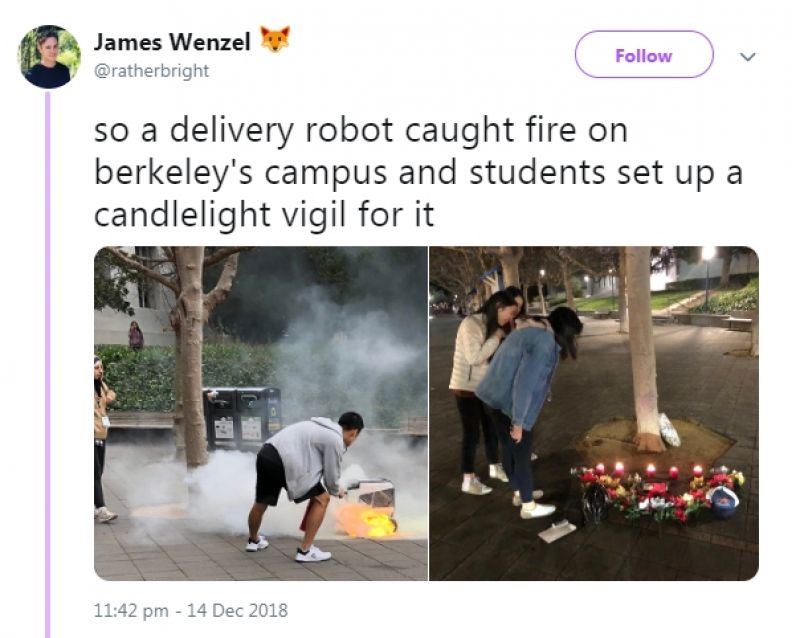 While the bot burst into flames on the street, the students at the campus took to their Facebook Page to pay tribute to the robot. They described the robot as a ‘hero’ and a ‘legend,’ according to the student paper. The students also called for a moment of silence and a few of them also went on to create a candlelit memorial for the bot.