Covid-19 India Updates: We're up the curve now. Here's what to expect
Technology Other News 17 Dec 2016 Kickass Torrents is ...
Technology, In Other News

Kickass Torrents is back

After its much publicised shutdown in August with its boss allegedly being arrested by the US Justice Department in Poland, Kickass torrents is back. No, it is not a mirror or a clone of the original one, but the original one in its full glory.

According to TorrentFreak report, Kickass Torrents’ original staffers have brought the defunct website back to life under a new domain name, with all its old content and former glory.

The website however, looks to be under construction right now with a message being displayed saying, “Servers load have been affected, there are other few sources of this issue, its not just one. We are working to fix this as soon as possible. One thing is for sure, we are not going anywhere, even as much (people) behind this acts want us to. Cowards always choose the shadows to commit their acts, and I do personally hope they know how to pray, they will need it.”

The website, after a special request of team members, have also pinned a YouTube like to Rick Astley’s famous track Never Gonna Give You Up which is an assumption that this message is for the community suggesting that Kickass Torrents is here to stay. 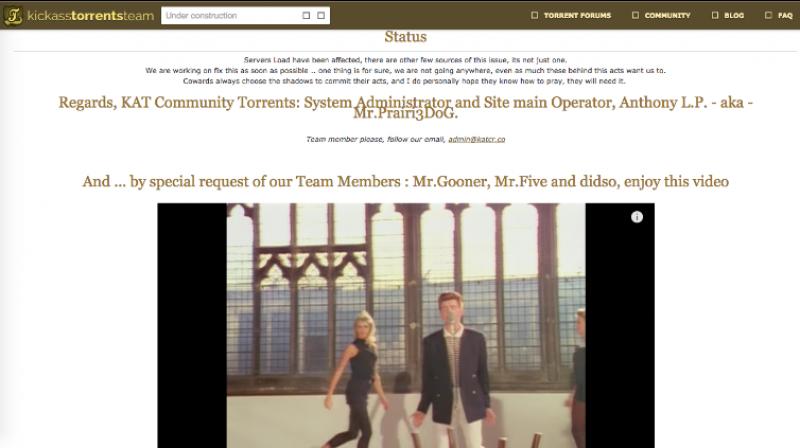 The staffers have pointed out that their site has a proper DMCA takedown procedure, which is similar to websites like YouTube which states that they do not store any copyrighted material on their servers.